In 2005, the Iron Grenadiers concept was chosen as the theme for the convention exclusive figure set.  It turned into one of the most popular sets in convention history and remains one of the most popular releases nearly 15 years later.  One oddball in the set, though, was the Destro figure.  Instead of a classic Destro mold, the Destro figure used the 1992 figure's head and a 1991 Crimson Guard Immortal figure.  All of the figures in the set seemed to fit together except for this Destro.  But, in the zeal of the set's quality, the Destro was largely forgiven and collectors moved on.

However, as 2005 progressed, an unproduced prototype of a 1988 Destro figure started to appear in Asia. The first speculation, of course, was that collectors were finally going to see a good Destro in a Toys R Us 6 pack.  But, as those sets' days at retail were done, that was not the case.  The mystery figure was actually something different.

It seems, in their infinite wisdom, that the club stumbled across this Destro mold when looking for figures to release in the 2005 convention set.  Since they were so plugged into the 3 3/4" collector community, they decided that collectors hated this version of Destro and discarded it.  When the 2005 Destro figure was revealed, most collectors wondered why it wasn't the 1988 figure mold in the set.  Caught with their pants down in embarrassment at their lack of understanding the 3 3/4" collecting world, the club released the mold in 2006: but as Overlord.  Collectors never got a 1988 Destro repaint and the club was embroiled in another snafu that even a novice 3 3/4" collector could have avoided.

In retrospect, it's very unfortunate that this Destro never got reuse.  In 2005, Hasbro released a terrible repaint of the 1992 Destro in a comic pack.  It is a completely wasted release and is ignored by collectors today.  Had it been a 1988 mold repainted in 1983 style, though, it would be among the more favored repaints of that era.  Seeing this figure is reminder of how badly both Hasbro and club bungled the few vintage Joe repaints in the 2000's.  They got some right.  But, they missed on so many more.  This Destro is a perfect example of what might have been.  This mold in Iron Grenadier colors and with convention level paint masks would have made the 2005 convention set perfect.  A feat that was never accomplished.  But, it was not to be. 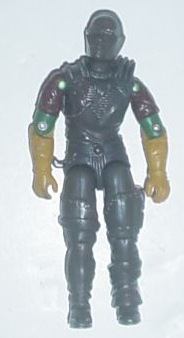