For whatever reason, the 2000's Toys R Us G.I. Joe exclusives had many unproduced variants.  It may have just been inattention to early details that lead to the changes.  Or, it might have been that collectors had occasion to learn about these figures just due to the Asian action figure sellers who were able to get a hold of them.  But, massive quantities of these unproduced figures were made available to collectors and thousands upon thousands of the figures were moved from Asia into collections...many to never be seen again.

The 2004 Anti Venom set went through a few iterations.  First, there was a dark blue version of the set.  Then, a lighter blue set appeared.  Finally, we got the tan version at retail.  The retail figures are held in high regard and tend to fetch decent prices today.  I was never a fan of the dark blue figures: mostly because the blue was too Cobra.  The light blue set, though, was better since the color kind of work for law enforcement type figures like Mutt and Barricade.  For Roadblock, though, the light blue pants are out of place and the production figure is substantially better.

In the mid 2000's, you could buy these figures on Ebay, on a website, or just by emailing the seller.  Depending on what the most recent Ebay auctions ended at, you could get these figures anywhere from $10 to $20.  The light blue Anti Venom unproduced figures were among the more common sets and you could get Duke and Charbroil for 1/2 the price of this Roadblock.  Obviously, this isn't the case today and this figure will fetch a substantial premium.  But, there are a lot of them out...probably almost as many as the convention set character figures.  You just don't see them as often as you used to. 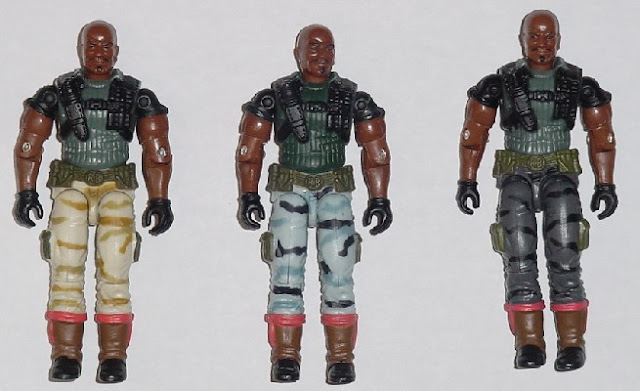