It's easy to forget now.  But, in 2002 and 2003, G.I. Joe was a hot property.  So hot that, as 2003 marched into the holiday season, Hasbro couldn't produce enough Joes to meet retailer demand.  The last two waves of the year ended up only being available to the big retailers because Joes were selling so briskly.  As the calendar turned to 2004, though, something changed.  While Spy Troops had flown off the shelves, the first wave of Venom Vs. Valor quickly stagnated.  The figures in the first wave were no different than the last waves of Spy Troops.  The packaging color remained the same with a few, cosmetic, changes.  But, Hasbro did ramp up production and VvV quickly appeared at big retailers, small retailers, grocery stores, specialty stores and online.  The cracks were there.

Before the year was out, Hasbro had cancelled their 2005 theme, Robot Rebellion, and pushed the release of many products.  At the 2005 convention the death knell was announced as Joe went on "hiatus".  All was not lost, though, as Joe's death at retail preceded the creation of HasbroToyShop and the entire Direct to Consumer experiment.  Hasbro created a strong lineup of figures and vehicles that were to be sold at online dealers only.  Of course, this failed, too.  Joe doesn't have the brand viability to survive in a niche.  (It still doesn't!)  But, Hasbro pulled out all the stops for the final waves.  Among the last figures Hasbro released during Joe's first renaissance was an Oktober Guard pack featuring a new Dragonsky, Lt. Gorky and the subject of this profile, Sgt. Misha.

One of the great mysteries of the 2000's was that the Oktober Guard never saw another release.  All of the figures were released in comic packs.  The first wave from early 2005 saw a limited production run due to the unsold stock of Wave 1 and Wave 2 that were still being clearanced all over the U.S. at the time.  The Oktober Guard then appeared in this late wave comic pack.  It was always odd that the figures didn't appear in a convention set.  The figures were incredibly popular.  There were many collectors who could not find them at retail and were missing the characters from their collection.  And, the figure molds lent themselves to repaints.  The fact that not even collector favorite characters like Horrorshow or Daina ever appeared shows that either Hasbro was unwilling to release the figures or that the club simply failed to properly gauge the demand.  (Guess which scenario I think is more likley....)  Either way, the Oktober Guard remains an underutilized subset in the ARAH form.

While the Sgt. Misha figure looks spectacular, it does have a serious flaw.  Misha's hands are painted.  The paint globs on to the hands.  And, for some reason, the hands in general are somewhat small.  The result of a small hand mold and extra thick paint is that very few Misha's can actually hold weapons.  (It doesn't help that the figure includes a good looking rifle that has an extremely thick handle.)  This greatly limits the figure's usefulness since most weapons simply pop out of his hands shortly after you affix them.  You have to find weapons with small handles for Misha to hold.  You can, on occasion, get his rifle to stay in his grip.  But, it's usually short lived.

Misha uses a mish-mash of parts: most notably Red Star's chest and Snow Job's (among others) legs and arms.  The head is all new.  What was exciting, too, was that he included some new accessories.  First off is the hat.  Misha's hat is all new and is the main piece that drives the figure's uniqueness.  The removable bandolier is also exclusive to Misha.  Hasbro introduced two new chest straps in this comic pack: Misha's piece and Gorky's holster.  These two new pieces help to make Misha more unique than his overused parts otherwise suggest.  He's rounded out by the JvC AK-47 based rifle (which isn't bad) and a knife.

Misha's coloring is very well done.  The green base is more interesting than the bland colors of 2000 and 2001.  And, the cammo pattern is subtle and not overbearing like many of the convention cammo patterns can be.  His five colors aren't too bad considering the late date of Misha's release.  The mold details are well painted and help breathe life into the parts. But, the hands were designed as gloves.  So, seeing them flesh painted can be a bit off-putting.  Had the hands been black, the overall coloring would have been about perfect.

The fact that we actually got a Misha is astounding.  But, since the DTC experiment was heavily geared towards collectors, it made sense that there were more collector focused figures offered.  The sad fact, though, is that DTC was a monumental failure.  So much so that Hasbro ultimately sold all of their G.I. Joe overstock to Toys R Us who then sold it in stores.  The upside of this was that Misha became available at retail stores around the country and was sold to collectors unable or unwilling to buy online or who were just in the dark that the DTC option ever existed.  Most of the final comic packs ended up being clearanced out online.  I don't, specifically, recall $4 Misha sets.  But, I bought a lot of Gas Mask Troopers and Dreadnoks for about a buck per figure and I have a few sets of the Oktober Guard, leading me to believe I stocked up on them at clearance, too.

Pricing on Misha figures is tough to determine, mostly because the supply of them is limited.  You don't see the masses of overstock and cheaply acquired doubles of the comic pack figures like you did just a few years ago.  So, desperate collectors overpay.  You'll see Mishas routinely sell between $25-$30...just because that's what dealers price them at.  Yet, carded sets of the comic pack will only sell for $20 when left to open auction...implying that Misha is probably really a $7 or $8 figure on his own.  But, it may take you a year before you come across a seller liquidating one on the open market.  For under $10, this is a solid buy and a must have.  But, at $25, there's no way I'd consider Misha at all. 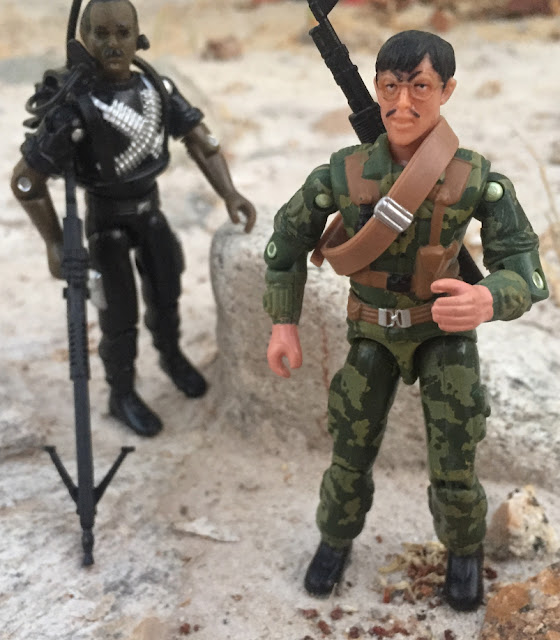 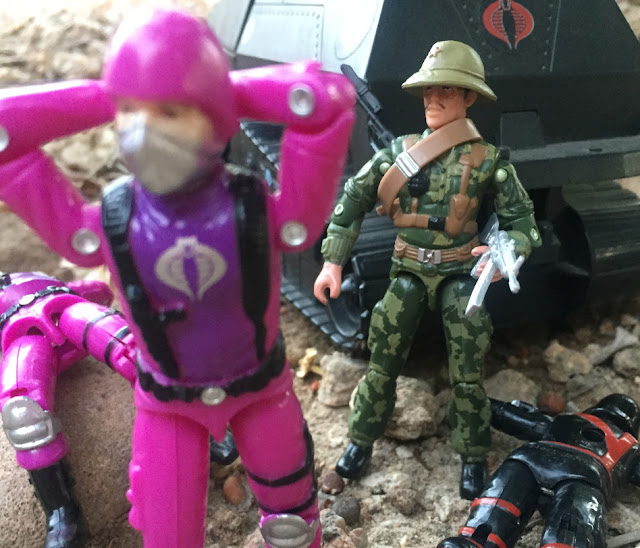 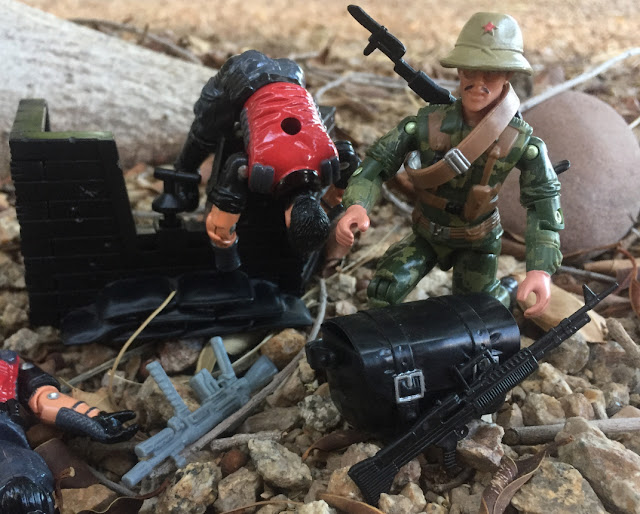 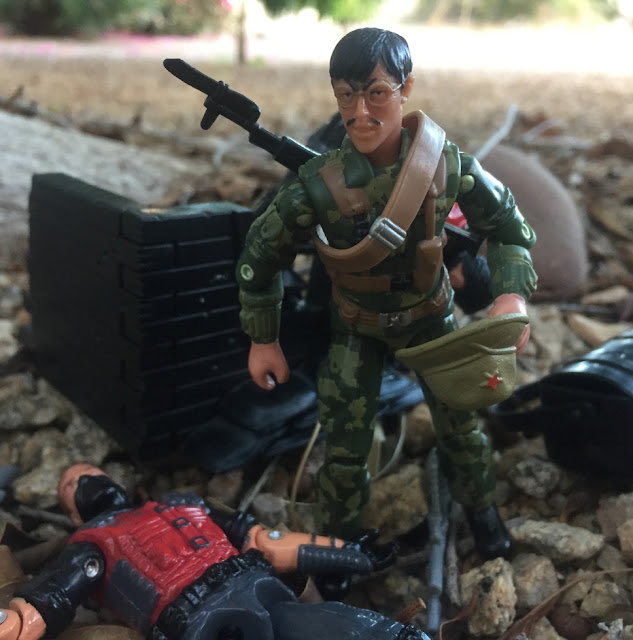 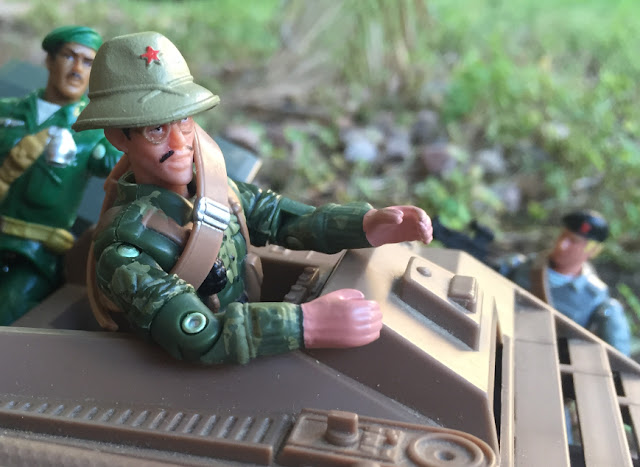 Posted by Robot_Sonic at 1:32 AM
Email ThisBlogThis!Share to TwitterShare to FacebookShare to Pinterest
Labels: 2005, Comic Pack, Oktober Guard, Sgt. Misha