There is a very real chance that I saw a Headman figure at retail during my one trip to Toys R Us in December of 1992.  I distinctly recall reviewing a cardback and seeing a Headhunter: thinking that he was a figure I wanted to own.  But, I did not find a Headhunter at the store.  I did, though, buy a Bulletproof: proving there were plenty of other DEF figures at the store.  So, Headman was probably there.  But, he left no lasting impression upon me and purchasing him was really not an option I entertained.  Over the years, Headman still never resonated much with me until a repaint showed up and was different enough that it allowed the character to stand out.  But, in time, things come around and Headman's complementary appearance with the Headhunters makes him useful

I acquired my first Headman figure in the late 1990's.  At the time, I was on a quest to find Headhunter figures.  And, in my purchase of lots that included the army builders, I also picked up a Headman figure.  The figure was there.  But, I did little with him.  Headman didn't really become part of my Joe world, though, until 2002.  That year, Hasbro released a Headman repaint in the overproduced Wave 1.5.   This orangish/tan redo on the character easily became my go to version of the character and also defined his character.  With this solid repaint in tow, I had little use for the original figure.  And, he didn't survive my early 2010's figure purge since the 2002 version was superior.  With that 2002 version, I created a replacement character for Tomax and Xamot.  That Headman was squarely situated in the business dealings of Cobra.  Now, though, I prefer Headman as a drug dealer.

I find it odd that there are collectors who have no issue with Cobra creating an army to overthrow the United States government but find that dealing drugs was too far for them.  Cobra needed funding.  And, while arms sales certainly pay the bills, drugs would provide a steady income stream as well.  Drugs also have the added benefit of creating discord in American society.  This would allow for conditions where Cobra could come in and easily brainwash people.  Larry Hama deftly visited this theme in some issues of the comic in the Millville arc.  Though, he avoided drug use/abuse as one of the themes that had the people worried.  Now, with opiods wreaking havoc across communities both large and small throughout the U.S., I can see Cobra getting their cut of the action to both better fund their activities and create opportunities for recruitment/takeover in neglected towns that are off the beaten path in the U.S.  Headman fits into this realm well.  He has a specific purpose in Cobra.  And, he's very valuable due to the revenue he generates.  But, Headman is also expendable.  It's relatively easy to find drug kingpins: especially when you have Cobra's resources of weapons and troops.  So, Headman has value and provides Cobra a valuable service.  But, he's careful not to tread too heavily lest he find himself replaced.  There's not a lot you can do with a role like this.  But, it gives this Headman some use and keeps him on the Joe's radar.  Cobra has interest in ensuring Headman isn't captured.  But, he also serves as a useful pawn that Cobra could sacrifice in an attempt to get the Joes to declare victory and move their resources away from Cobra's domestic funding operations.

As a design, Headman has pluses and minuses.  He is the only vintage figure sculpted in a suit.  In the 2000's, this became hugely important as it was quickly commandeered for both a new General Flagg and the desperately needed Tomax and Xamot in business suit figures.  Of course, now, all Cobras wearing suits went to the same tailor.  But, there's so few of them that it's OK.  The pinstripes are odd.  In some ways, they look nice.  But, even with the vertical striping, the figure looks too much like a prisoner.  The stripes are also gold paint.  We all know the limitations of gold paint and they become apparent quickly as even decently conditioned Headman figures will often show a bit of wear on the stripes.  The biggest design flaw is the head.  The figure's ponytail is a nice addition that gives the character some depth in design.  But, the face mask is simply too 1940's.  It makes the figure look like the Hamburglar.  So, any seriousness afforded to Headman as a character is quickly lost with that design association.

In the early 2000's, collectors were mostly enamored with 1987 and earlier characters.  A few Cobras from 1988 and 1989 managed to break into the general collector conscious.  But, 1990's Cobras were mostly ignored.  As the 2000's turned to the 2010's, you saw a few more of these 1990's characters enjoy moments of spotlight where the figures were shortly desirable.  But, the late 2010's have brought a greater appreciation to the 1990's Cobras.  Characters like Cesspool, Toxo-Zombie, Interrogator, Vapor and even repaints of Dr. Mindbender, Major Bludd and Destro have started to gain appreciation among collectors.  Headhunters, in particular, have taken off in popularity again.  (They had a brief surge around 2002-2003, but then fell out of favor.)  Headhunter figures have gotten very expensive and hard to find.  Even items that collectors tended to loathe (like the convention Headhunter Stormtrooper) have gained some popularity.  Headman, though, has not.  The character remains obscure and the only real market interest in him is driven on scarcity rather than popularity.  This is likely a function of the fact that Headman's look can be taken as a joke.  But, even meme worthy figures like Funskool Big Brawler have found some cachet among the collectors of the world.  Headman mostly remains lost.  He has yet to take ahold of the collecting hive mind.  This is likely a function of his absence in the anniversary line.  It's not bad that some characters fall behind since it leaves unturned gems for collectors to discover later.  But, in Headman's case, I wonder if it's going to happen for him since his design and look present such challenges.

Headman's gear is not great.  His main accessory is a gigantic missile launcher with missiles.  It's useless.  But, it's something that was used to increase the figure's retail price point.  He also includes a blocky, golden rifle.  Personally, I despise this weapon.  I think it looks terrible.  But, I have been surprised to find my opinion of it is in the minority.  Many collectors actually really like the weapon and consider it a key attribute of the figure.  I would have preferred that Headman included some type of cane.  (He sported one in the comics.)  It would have played up his stereo-typical design.  But, also would have been a unique feature of vintage Joe line.  I went looking for 3 3/4 canes.  But, I have yet to find any from the major dealers of compatible accessories.  So, if you know of a good one that's widely available, leave a note in the comments.

Headman was only made by Hasbro.  He had the 1992 and 2002 releases.  Then, his body was used in 2004 for General Flagg and in 2005 for Tomax and Xamot.  Oddly, he didn't appear in the 2008 convention set.  But, since we had a decent Headman repaint in 2002, it was a much better choice to include the previously unseen Gristle figure as the set's main antagonist.  When Hasbro repainted both the Viper/Mirage and Alley Viper/Big Ben sets in later 2002 figure waves, I desperately hoped that a repainted Headman would also follow.  I thought the mold still had potential for a stupidly wacky repaint (think purple or green suit!) that would have been a departure from Hasbro's 2000's norm of muted colors.  But, this never happened.  And, Headman remains an under-utilized mold from the vintage era.  I can't really say he was wasted.  But, I feel more could have been done with him.  But, since collectors seem to have left the character behind, it was probably the right choice to not re-visit him again and again.

2018 brought tremendous change to the Joe world.  There was an influx of new collectors.  This increase continues to drive prices of even common and undesirable figures much higher.  The other thing it's doing, though, is finally bringing to light the inequity in production numbers between regular carded figures and the carded sub set figures.  Themes like DEF, Eco Warriors and even Star Brigade are starting to show up with less frequency.  The lower production numbers on these sub-themes have always been known.  But, they have never really manifested when trying to acquire the figures on the after-market.  Now, though, it is becoming harder and harder to find loose samples of figures from these sub sets.  While you used to see plenty of lots featuring a few of the sub set characters each, you now find fewer and fewer dealers and collector/dealer hybrids are willing to do this.  They separate out the sub set figures and sell them alone.  This leads to the perception that the sub set figures are scarce.  And, while this is true, it's not as true as dealers want new collectors to believe.  You often see thinly veiled attempts to frame figures as rare from a person who, secretly, is selling those exact figures on another venue.  You see people talking about $40 Headhunters while watching the figure sell for $18 on an open sale.  Yes, the DEF figures exist in smaller quantities than the regular carded series.  But, they were also widely shipped and exist in far greater quantities than any Joe made in 1997 or later.  And, those who try to portray it otherwise usually have an agenda they are keen to keep discrete.

Dealers seem to get around $20 for a mint and complete Headman figure.  Left to his own devices, though, the figure isn't much cheaper.  You might find one for $15 or so.  But, they appear less and less frequently as open sales.  You can get carded versions of Headman for between $30 and $40.  And, those seem to be about as a available as loose samples.  However, incomplete Headman figures can be picked up for just a couple of bucks.  And, since his gear really sucks, I find that a much better option to add Headman to your collection.  (And, the 2002 version is still dirt cheap and it's, in my opinion anyways, a much better figure.)  I wouldn't pay that much for this figure.  He's neat and a needed member of the Headhunters faction.  But, I've never seen Headhunters as belonging to Headman.  Free from such constraints, Headman's value to me plummets even more.  Your mileage, of course, will vary.  Since DEF is a small subset, many collectors complete it out of boredom.  Headman hasn't really captured the attention of collectors.  If the second Joe renaissance continues, it's probable that we will, eventually, get around to Headman.  But, those surges are shortlived and I don't see Headman ever becoming more than what he is today. 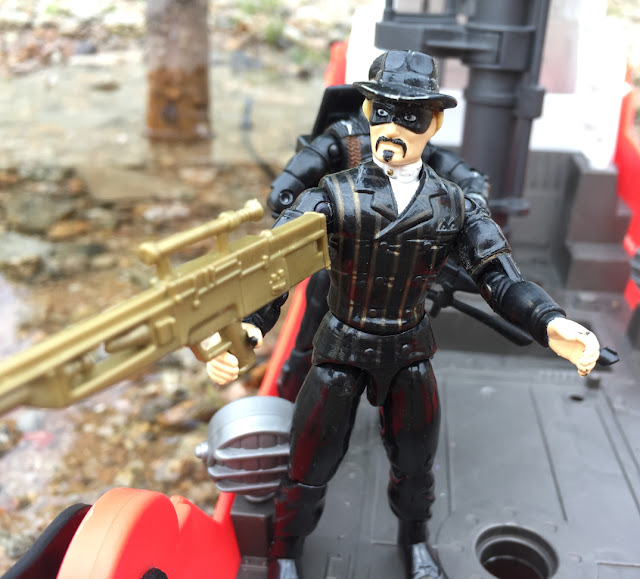 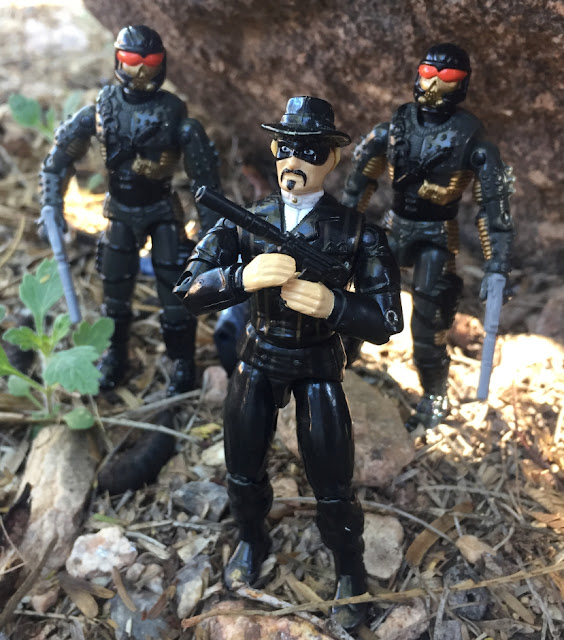 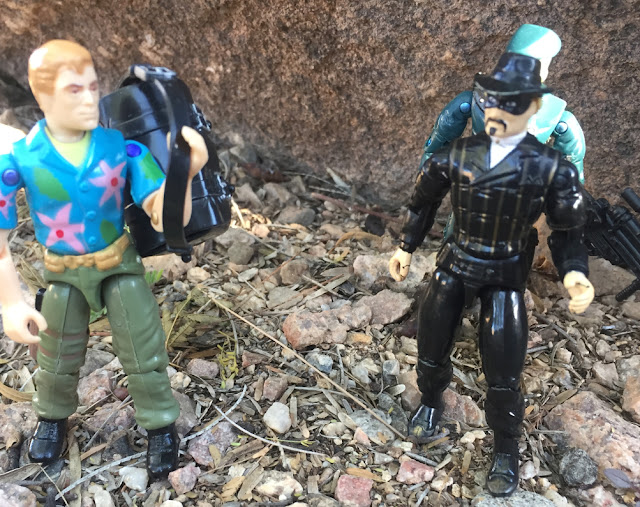 Posted by Robot_Sonic at 2:00 AM
Email ThisBlogThis!Share to TwitterShare to FacebookShare to Pinterest
Labels: 1992, DEF, Headman