In 2002, Hasbro had a massive plan to bring G.I. Joe back to retail.  The figures were re-designed into a more modern aesthetic and were given a marketing overhaul to usher in a third generation of kids to the G.I. Joe mythos.  But, on the way to glory and riches, Hasbro hit a little snag.  It turns out that a vocal group of adult collectors were not 100% on board with the new direction the figures were taking.  At the time, companies still didn't know how to properly gauge internet outrage.  But, they were wary of it.  And, a few Star Wars missteps had given Hasbro a blueprint on how to handle adult collectors.  So, interspersed among the new figure styles were a smattering of repainted vintage Joe figures.  These repaints helped lower the costs of the retail line while keeping collectors engaged.  However, you could easily argue the efficacy of their efforts as the repaints quickly turned into repetitive figure releases done in oddball colors.  One figure that best showcases the blending of old paint mask costs versus the blase design was the 2002 Big Ben.

Big Ben was released twice in 2002.  (Which made less sense when you realize that Big Ben/Whiteout 2 packs from the early 2001 figure waves were still collecting dust at stores around the U.S. and Canada.)  The first release was a very solid tan and green design who meshed well with General Tomahawk and Sure Fire from the Wave 1.5 releases.  This wave was a bone thrown to vintage Joe collectors to sate their appetite for classic molds while also buying Hasbro time to update the sculpting on the Wave 2 "new sculpt" figures to now include the iconic o-ring.  The wave was well done, but massively overproduced.  Even the two highly desired army builders were abundantly available.  The second Big Ben, though, was included as a shortpack in the Wave 2 cases.  Again, Big Ben, Alley Viper, Mirage and the Cobra Viper were perks for long time vintage Joe collectors.  Collectors were given new army builder repaints while also getting updated paint jobs on some solid Joe molds.  The second Big Ben, though, featured an odd color scheme that makes him stand out in both good and bad ways.

This figure uses some of the same colors and paint masks as the Wave 1.5 figure.  The greens are compatible (which actually helps if you army built both figures) and the bullets feature a rich golden color that's better offset by a black bandolier.  Big Ben's head, though, is one solid color.  If you mix and match heads, you can get some more interesting combos of Big Ben.  But, both 2002 releases feature paint masks missing on the other.  It's kind of weird.  His pants are a fairly ugly brown.  But, they don't really clash with the blue coat.  So, it kind or works.  Big Ben's hands are meant to be gloved.  And, all the releases prior to 2002 featured gloved hands.  Hasbro went with flesh hands on both 2002 releases and it doesn't really work.

What do you do with a figure who's primary color is baby blue?  Big Ben's arctic type design works in his favor in regards to the color choice.  There is a surplus of blue ice in many arctic environments.  So, Big Ben could blend into the background in locations like that.  Otherwise, the color is one of many in the history of the Joe line that make little sense but are kind of fun to look at.  But, that's the reason I like him.  The early 2000's vintage Joe repaints were heavy on green and brown and all kind of blended together.  A figure like this Big Ben stood out for how different it was.  Sure, that difference means it's completely forgotten today.  But, it also broke up otherwise banal releases of that era.  The vintage Joe line was a panoply of color.  Many collectors choose to not remember it that way.  But, looking at carded figures arranged by year proves that figures like this Big Ben were the norm from the beginning.

The soft plastic used on the early 2000's era Joes is turning out to be somewhat problematic.  Many figures from this era, even properly stored, are starting to discolor.  Whites are starting to tinge yellow.  (Star Wars figures from that time used similar plastic and Stormtroopers and Clones from that time are starting to drastically yellow.  It's sad to see mighty Imperial armies fade away due to shoddy materials.)  But, light blues are proving to be especially hard hit.  Figures like the Comic Pack Scarlett, Scrap Iron and Thrasher all discolor with slight provocation.  And, collectors are starting to find that even figs packed away in dry basements are starting to turn.  This Big Ben uses the same colors and you see many samples where fading has already kicked in.  It's probably inevitable that these figures will turn in time.  You can only take measures to postpone the degradation.  But, you see lots of Big Bens where the arms or chest are losing their original color and it's only going to get worse.

The 2002 Big Ben figures include the same gear.  But, the colors are slightly different.  This blue Big Ben includes his classic rifle, satchel and two grenades.  Hasbro included a bonus Snow Job rifle with the figure to make up for the missing bi-pod and backpack.  The absence of the pack is a nuisance.  But, the Gift Set Dial Tone from the same year (and Recondo that was released in 2003) both include black versions of the original Big Ben pack that work perfectly with this blue release.  It should be noted that Big Ben's weapons and grenades are a unique, graphite color.  They have a bit of a sheen to them that makes them distinct.  (This color was used on the weapons included with the Alley Viper, Viper and Mirage, too.)  Black versions of Big Ben's gear are more common and many collectors who tossed gear into bins during this era are likely to think the two Big Ben's have the same weapons.  So, when buying this Big Ben, be sure to confirm the weapon color to ensure you're getting the correct versions.

This Big Ben figure was only packed one per case in Wave 2 of the 2002 G.I. Joe vs. Cobra line.  Despite the shortpacking and his inclusion with an all powerful army builder, this figure was fairly easy to find.  G.I. Joe had a huge retail push in 2002 and stores received plenty of cases.  Brisk sales also ensured that stock was replenished.  I was still finding this figure at retail into the early months of 2003.  But, the shortpacking has somewhat caught up with this figure and you do not see him with anywhere near the frequency that you can find his far more common Wave 1.5 brethren.  But, since this is a very undesirable look for the character, you can still get mint and complete with filecard versions for $4 - $6.  In this day of stupid Joe prices, that's a relative bargain.  But, better Big Ben figures are just as cheap.  So, outside of the oddity of this figure's color scheme, there's no real reason to track him down.  But, I'm a sucker for $4 Joes.  So, that alone makes him a worthwhile pick up. 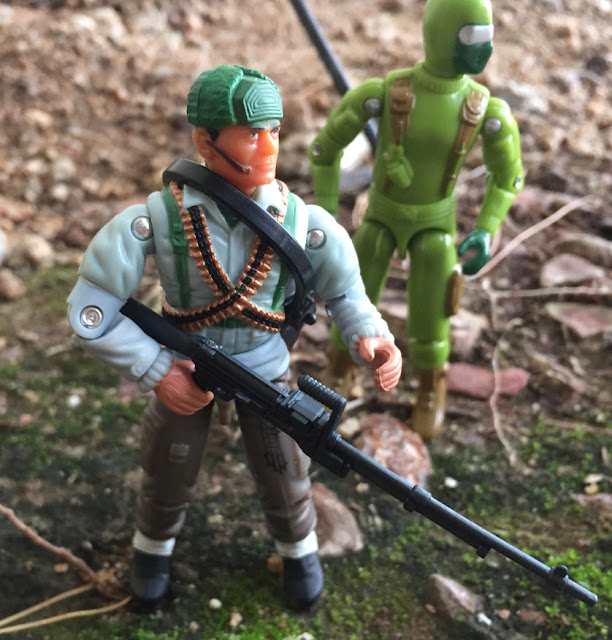 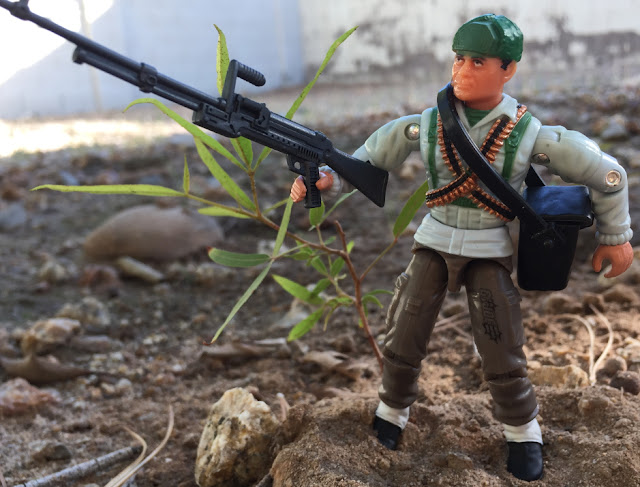 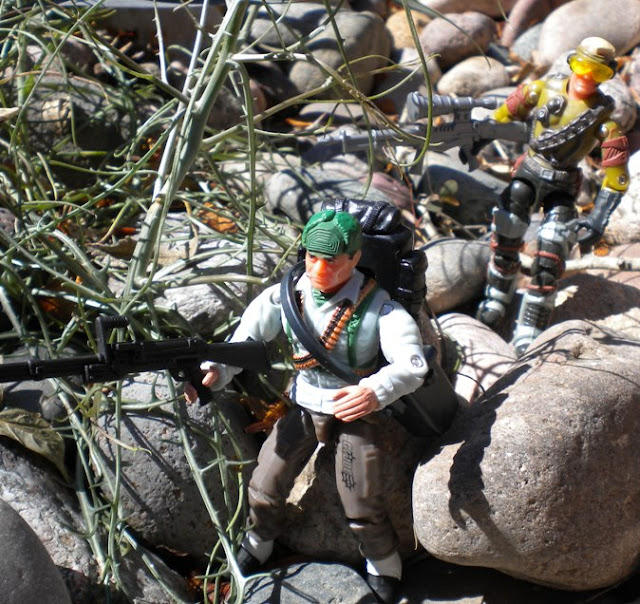 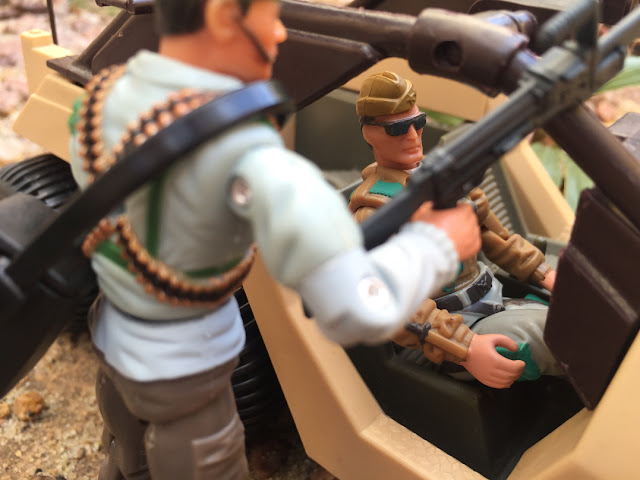 Posted by Robot_Sonic at 1:24 AM
Email ThisBlogThis!Share to TwitterShare to FacebookShare to Pinterest
Labels: 2002, Big Ben, JvC