Thousands of G.I. Joe figures have been released in either the JvC or anniversary construction format.  A huge number of them, though, were little more than rehashes or homages of vintage figure designs.  In the cases where Hasbro tried something new, more often than not, the design fell flat and produced a dud of a figure.  Every now and then, though, Hasbro hit on a new, original figure concept that both produced a high quality figure and resonated with collectors.  Such was the case with the 2011 release of Shadowtracker.  This new character caught on during Joe doldrums due to his interesting design, high quality gear and the fact that he was kind of hard to find.  In 2018, Red Laser's Army pulled a reversal and offered a vintage Joe styled remake of Shadowtracker as a way to bring the character to those of us who collect only classic Joe models.

Let's face it, Shadowtracker is a Predator knock off and not a really good one at that.  But, simultaneously, he brought an interesting look to the Joe line and provided a needed splash of color to figure designs that tended to be overly reliant on black and green.  The filecard is a mixture of Predator and Gnawgahyde.  So, he's not a very deep character.  But, most of the Cobra villains of the '80's were superficial supplements to the three or four core villains who got all of the depth. So, in that respect, Shadowtracker fits right in.  He's interesting enough to have around.  And, visually, he's diverse enough to bring some color to a Cobra display.  But, he's not a guy who's going to supplant Destro at Cobra Commander's side.

For this Red Laser figure, the most notable difference is that the dreadlocks are lone gone.  There was really no way to incorporate them into a figure like this.  But, the bald look works for this figure, too.  The skull mask design is more greatly accented by the smooth dome. And it is that skull mask that is the figure's calling card.  When I first saw the concept art, I was concerned as to how the actual paint mask of the skull would translate to a figure.  But, did it ever work!  The black face on yellow head makes for a striking visage and allows this figure to pop, even with the missing hair.  The coloring was a bold choice (though backed by the original figure's design) and it paid off with a new villain who looks different than others in his figure style but is still also incredibly cool.

For me, figures like Shadowtracker are a great way to explore early Cobra.  Before Cobra really took off, Cobra Commander would have had to associate with a variety of criminals who could both provide military expertise as well as general menace to keep the troops in line.  These people would have been more unsavory than the Commander would have liked.  But, they would also have been the type of cretins he could afford to employ before Cobra really took off.  Shadowtracker fits into this mold.  He's not a guy who's a great tactician or even a student of military history.  He's a guy who likes to hurt others and isn't afraid to get his hands dirty.  So, the Commander had a use for him for a while.

Like most of these new factory custom figures, though, the character of Shadowtracker was short lived.  Once Cobra began to grow and the Commander could afford the talents of Destro, Firefly, Zartan and Major Bludd, the need for these ancillary hangers-on was lessened.  In a perfect world, contractors like Shadowtracker would have been let go and freed to work for others.  But, Cobra Commander is not so forgiving.  He couldn't risk at large former Cobras being captured by the Joes or other foreign governments and having them spill Cobra secrets to cut a deal with their captors.  But, killing them outright also sent a message to others out in the market that Cobra would be their last employer.  So, the Commander simply sent men like Shadowtracker on increasingly dangerous missions.  Eventually, the occupant stamped bullet would find Shadowtracker and others of his ilk.  This left Cobra in the clear since they didn't murder their superfluous contractors but also cleared out the dead wood so that the new guard could ascend.

Shadowtracker's gear isn't great.  He includes the ammo pack from the 1982 Snake Eyes and Scarlett's crossbow.  I get the idea of the weapons.  But, they don't click with the figure for me.  I've, instead, armed him with silver AK-47s from Black Major, grey Mac-10s from other Red Laser figures or Marauder, Inc. weapons.  Really, anything that's not the gear with which he was included.  Usually, I consider bad weapon choices a detriment to a figure.  But, in this case, the figure quality overcomes the lacking gear and is able to transcend his poor accessory choices.  So much so that even picking up a loose figure with no gear is a solid acquisition since you can find better weapons for Shadowtracker without a lot of effort.

Shadowtracker isn't overly expensive.  He is a bit harder to find than he was during the first six to either months of his release.  You should be able to find one anywhere between $10 and $20 depending upon how long you want to look for a sample.  For my money, this guy was a must buy.  The black and yellow is a color combo that doesn't exist on 1982/1983 Joe parts and the skull face works far better on top of the yellow base color than any of the other figures released in the same wave that use the same paint mask.  He's an excellent update to my pre 1985 villains and supplements a sparse Cobra hierarchy from that time.  I've found most of the Red Laser unique figures to be solid entries into my collection.  Others' mileage may vary.  But, Shadowtracker is usually among the figures around which there is a consensus that the figure is well done and a worthy addition to any collection. 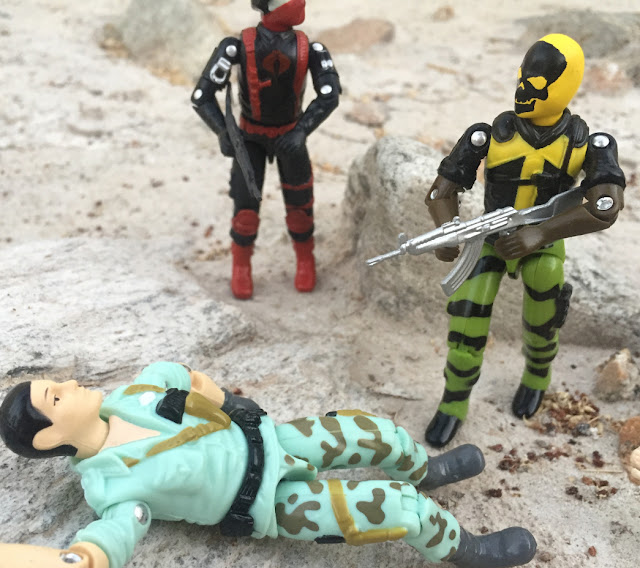 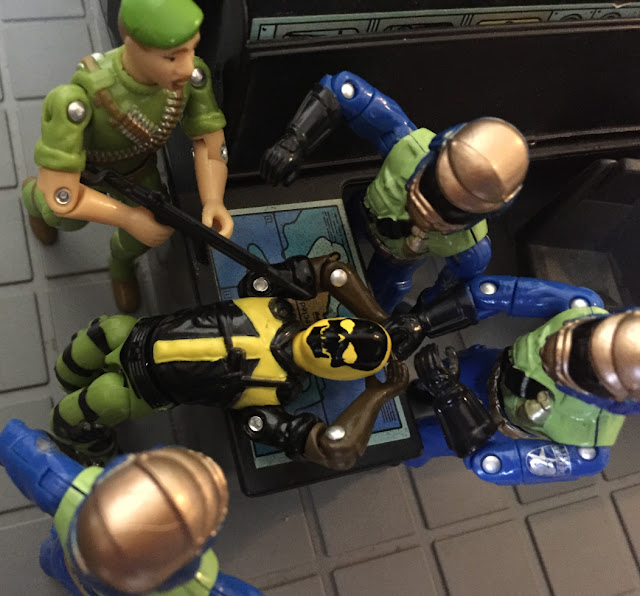 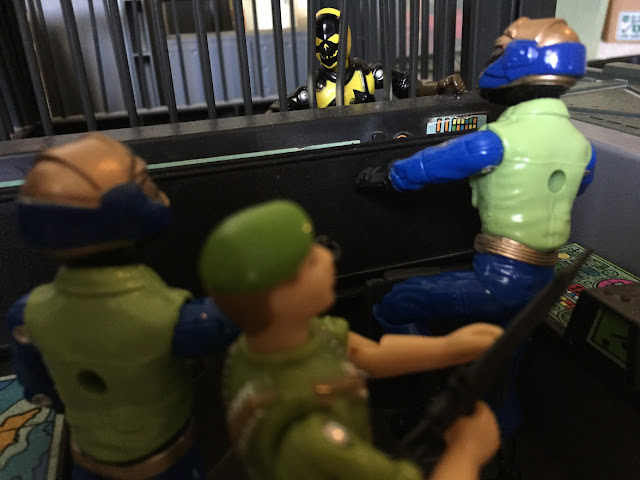