An ongoing complaint I’ve had with 1:18 figures is how they never quite land when it comes to dress attire.  The ARAH format was particularly bad due to its many points of articulation, which completely destroy the “flow lines” of a suit.

A good starting place for 1:18 scale suit-wearing figures isn’t even within the world of GI Joe.  It’s Toht, from Kenner’s 1982 Raiders of the Lost Ark line.  Wearing a double-breasted suit and a Homburg-style hat, Toht is about as 1930’s/1940’s as one could get.  This is important because the dress attire from that period, almost a century ago, still lines up with men’s suits today. 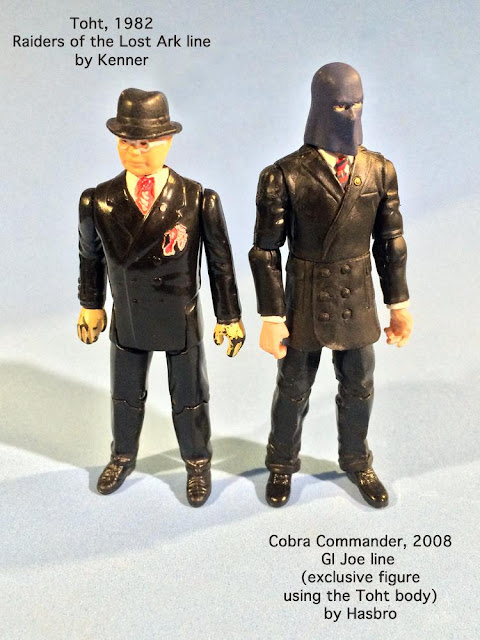 Granted, the dress attire/suits of yesterday and today aren’t exactly the same.  The double-breasted suit took its last modern breath in the early 90’s, but a handful are still out there.  As for the hat, no one under 90 wears hats with suits anymore.  In fact, only hipsters wear hats -the formal kind that haberdashers would sell- these days, and that’s usually paired with skinny t-shirts and scarves (as pointed out numerous times by Adam Carolla).

But a Toht figure wouldn’t look out of place next to a GI Joe figure, despite the differences in articulation and build.   Kenner succeeded with Toht because there is no waist/hip articulation.  Some of you probably see that as an automatic failure, and if high articulation is your thing, I respect that.  But to my eye, the unbroken line of the suit down to its bottom edge works perfectly.  Some of the suit bottom is sculpted onto the tops of the legs, which works fine for the t-crotch design.  The closest ARAH style suit figure, Headman, really reveals the failure of the format to capture the look of a suit.

This is a good figure, but for this review I’m seeing it as a figure in a suit, not through the lens of all-things-Indy.  I’m sure Indiana Jones collectors have reviews reflecting that viewpoint.  Just so you know why I’m not talking about how film accurate it is or isn’t.  I also regret that I can’t show you Toht’s amazing draped-around-the-shoulders trenchoat because I lost it.  In 1984 I placed it on a Major Bludd figure, where it looked even more amazing.  When I organized my Joe collection in 1998, I must have separated it from Bludd without putting it back with the few Indy figures I had.   Bummer.

This is a seven POA figure.  Neck, arms shoulders (no lateral movement/no elbow articulation), legs at hips (t-crotch) and knees.  This is the same recipe Kenner used for MASK’s Miles Mayhem’s military dress uniform, a format that would have looked better on 1:18 Joes in dress uniforms.

Hasbro brought back Toht’s look for its Indiana Jones line with modernized articulation.  Although Toht didn’t get to production until several years later*, the Toht body did see use for a convention Cobra Commander in 2008.  The arms and legs have additional articulation.  Lateral shoulder movement, swivel/hinged elbows, swivel wrists, a swiveling waist (hidden within a rubber “skirt” portion of the suit), t-crotch hips, swivel/hinge knees, and swivel/hinge ankles.  All of these are technically improvements over the original figure, but the original 7 POA body is just fine like it is.   It’s worth noting that the modern figure doesn’t have the inside-the-hand burn mark of the original figure.  Hasbro may have substituted different hands for that reason, but I doubt it.* 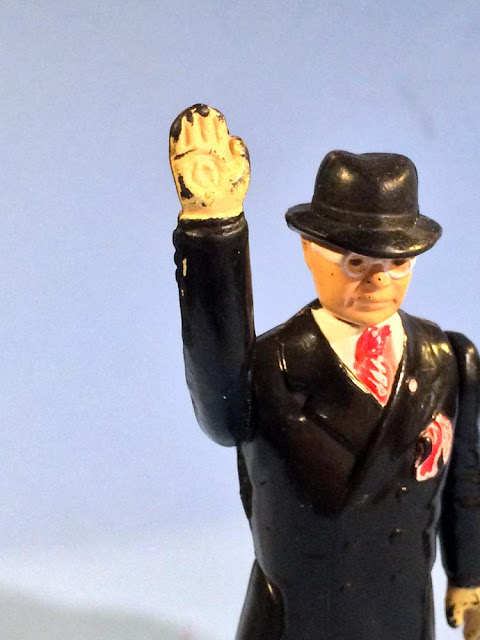 The torso on the modern Toht body is disrupted by the waistline articulation.  Other than adding a spot to attach the “skirt” portion, it doesn’t accomplish anything.  Better suit figures have simply made the entire torso part of the suit as its own animal, and that usually looks better.  The sculptor didn’t do his/her research either, and pushed all of the breast buttons below the belt line, which looks unintentionally silly and just a bit vulgar.

Even with far fewer points of articulation, Toht has a simple grace and fluid look that work nicely for a figure in a suit.  The newer format Toht body shows many articulation improvements if that’s your style preference, but offset by a poor torso.


*yojoe.com states that the left hand (the figure’s right hand) was used from an Indiana Jones figure and that Toht was finally released later, in 2011.

Posted by Robot_Sonic at 1:25 AM
Email ThisBlogThis!Share to TwitterShare to FacebookShare to Pinterest
Labels: 2011, Cobra Commander, Features, Indiana Jones, Past Nastification