Some characters just get short changed.  Short Fuse is one such Joe character for me.  In 20 years, I've looked at one Short Fuse figure from the 2005 Comic Book Pack.  I like the character so much that I not only misspelled the title of that character in that profile, but I also misspelled it 22 additional times in the body of the profile.  It's not that I hate Short Fuse.  It's just that the character and his various figures over the years really haven't resonated with me.  While a mortar was a useful idea in childhood play, the practicality was limited since it was tough to use the weapon in close quarters that dueling action figures require. So, Short Fuse never much mattered to me.  And, while this 1997 repaint is a solid upgrade from the original, it's also somewhat uninspired and hasn't helped the character catch on with me.

As a figure, Short Fuse suffers from his introduction to my collection.  The original Short Fuse was owned by my youngest brother.  As he was four at the time, any figure that was given to him was quickly destroyed.  Somehow, he received both Short Fuse and Zap in early 1983.  And, with both figures, their thumbs were destroyed even before the figures really entered in our play rotation.  So, Short Fuse was really never part of those early Joe memories.  At some point, the same brother got a swivel arm version of Short Fuse.  This figure was better cared for...I pulled him aside to save him.  But, by the time he was introduced, 1984 figures were on the shelves and Short Fuse seemed dated and relatively useless.  As he wasn't much of a player in the comic, Short Fuse never really mattered much to me.

So, upon finding the Stars and Stripes set at a Toys R Us in Scottsdale, Arizona in December of 1997, I still paid Short Fuse little attention.  I was enamored with Stalker and appreciated the Snake Eyes figure.  In time, Scarlett and even Zap would find some use in my collection.  Short Fuse, though, remained forgotten.  Even though the new red hair gave Short Fuse some characterization that separated him from the other blonde uses of his 1982 sculpted head, I didn't have much use for him.  I found one photo shoot from the fall of 2001 where he appeared.  But, that was about it.  (It's the photo below with Short Fuse on the Swampmasher.)  The figure just didn't catch my eye and he remained packed away until it was time for photos for this profile.

All of which, though, isn't to say that this is a bad figure.  Aside from the red hair change, this Short Fuse is pretty much the same as the original release.  His upper body coloring is close to that of the 1983 Zap figure...further tying these two together.  But, the lower body is a lighter green with a slight cammo pattern that gives this Short Fuse far more depth than the original 1982 figure.  He has both black and brown accents.  This breaks up some of the cohesion of the figure.  But also allows for more colors in the palette.  In short, this is a better Short Fuse than the original.  But, he's still kind of boring and not visually interesting enough to overcome his lack of characterization or difficult to use specialty.

I've long felt that Downtown was meant to be a Short Fuse update.  In 2004, Hasbro agreed and brought around the first appearance of Short Fuse since 1997.  This repainted Downtown that was released in the 2004 Night Force set was a good way to breathe some life into the Short Fuse character.  Alas, while that figure is excellently painted, his gear is atrocious and that lessens the value of him quite a bit.  So much so that not even that solid take on the character was enough to get him to crack into even some of the lesser used figures in my collection.

Short Fuse's gear is fairly well done with a few caveats.  First off, he includes a retake on his original mortar and stand.  The mortar is the thick 1/2 handled body and the stand still works perfectly.  He has his classic pack in a green color that matches the figure's body.  The rockets are painted black, though, to give it much greater depth.  He includes the clearer 1997 visor and a green take on the classic helmet.  Alas, the 1997 helmets are crap and don't really fit onto any of the figures in the set.  So, Short Fuse is doomed to an eternity of awkwardness.  The one fun update to Short Fuse, though, is that he also includes a green bazooka from the the original Zap.  The practicality of carrying both a mortar and bazooka into battle is nil.  But, from a toy perspective, the inclusion of this extra weapon brought a great deal of playability to Short Fuse that his original release was missing.

Short Fuse traveled a bit.  After the figure's Hasbro release, the swivel arm mold went to India.  (The straight arm mold was released in South America.)  There, Short Fuse was released in a few major color variants as well as several minor green shading differences.  Some, like the blue Short Fuse, command high prices.  Others will sell for less.  But, Hasbro got Short Fuse back for the Stars and Stripes set in 1997 and the figure was never released again with the full body or complement of vintage gear.  Hasbro could have gotten more mileage out of this mold (and the other Stars and Stripes figures) with a few creative repaints.  I'd have bought any original 13 member in desert, Night Force or even Tiger Force paint schemes.  But, we're just left with this 1997 version as an update to the original figure.

1997 Short Fuse figures aren't terribly hard to find.  Many dealers carry them in the $15 range...selling quite a few.  Left to the open market, it's about an $8-$10 figure.  That's not too bad for something that's more than 20 years old, is colored nicely and includes a ton of classic gear.  For the price difference between this figure and a 1983 version, the 1997 is definitely the way to go.  I've found time to be kind to the 1997 series of figures.  It wasn't well liked upon its release.  But, when considered against all that came after it, the 1997 figures have held up far better than many of their post vintage contemporaries.  For me, this figure is still Short Fuse and I don't have much use for the character.  But, this 1997 version gives me an appearance that's more interesting than the 1983 and is also far less brittle.  That's not much value that he brings.  But, it's enough to justify owning one, for sure. 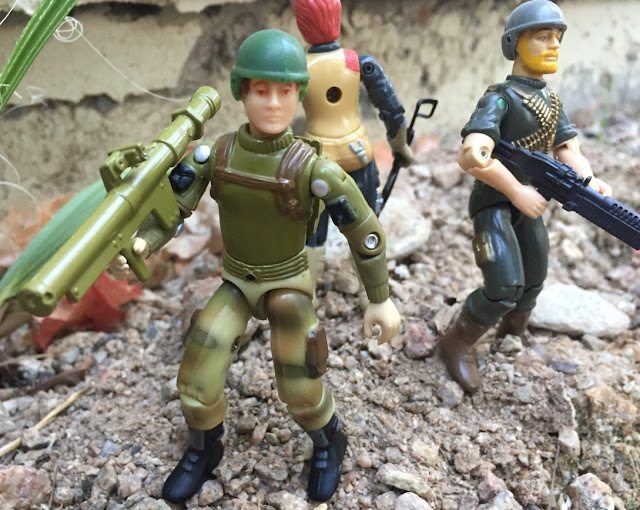 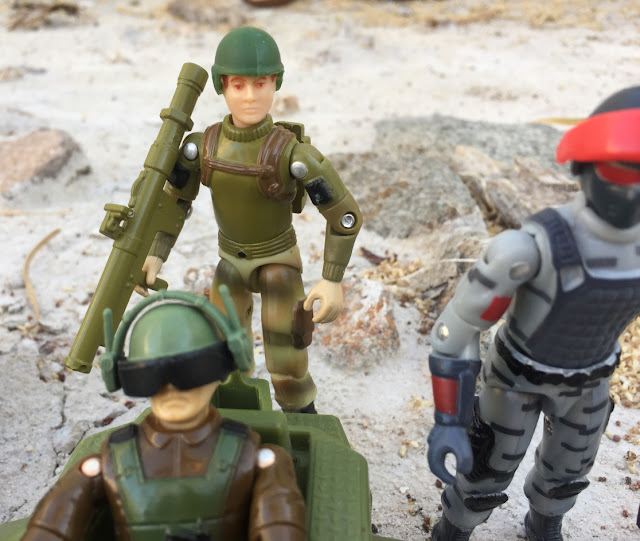 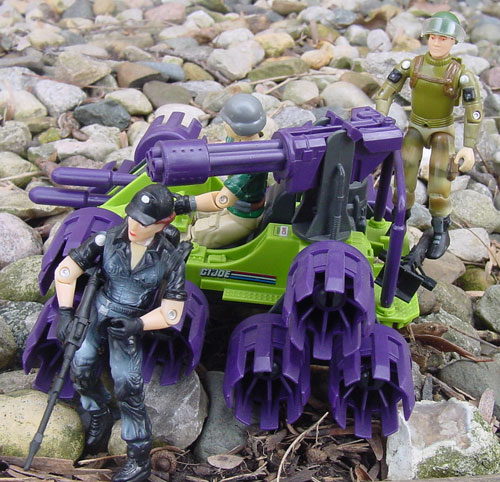 Posted by Robot_Sonic at 2:44 AM
Email ThisBlogThis!Share to TwitterShare to FacebookShare to Pinterest
Labels: 1997, Retailer Exclusive, Short Fuse, Short Fuze