I want to say that I hate Grunt.  However, that is unfair.  The reality is that I don't care about Grunt.  At all.  As a figure and as a character, Grunt has never been particularly relevant to me.  I'm not sure why this is.  While not the most interesting of the original 13 Joe figures, he's not the least interesting, either.  In fact, it his general blandness where he's neither great nor bad that is the cause of my indifference to the figure.  All of that, though, doesn't belie Grunt's place in Joe history and his importance to the fledgling line back in 1982.

My first encounter with Grunt was during my brother's infamous birthday in October of 1982.  He got most of the carded Joes along with the VAMP and HAL.  As the figures were opened and each kid took one to play with out in the front yard, the only thing I found interesting about Grunt was his backpack.  I quickly grabbed it, affixed it to Clutch's back and moved on.  It's likely that Grunt's thumb was quickly broken in those early days.  But, I have no real memories of Grunt at all beyond his pack being stolen for my "super" Clutch figure.  I can still recall the day that pretty much every original Joe character entered into my collection.  My only real recollection of Grunt was finding pieces of one buried behind bricks in our front yard after we had entombed him in 1982.

Grunt was so inconsequential to me that it wasn't until a year later when my brother acquired the Falcon Glider and the Tan Grunt that I paid any attention to the original figure.  I noticed the silver knife on the Tan Grunt's chest.  I loved this paint detail and it was enough to make the Tan Grunt interesting to me.  By that time, most of our 1982 straight arm Joes were broken and had been tossed in a box.  I thought there was no way I'd have missed the silver knife on the original Grunt or else I would have liked that figure better.  I dug the dirty and broken 1982 Grunt torso out of a box of broken and discarded Joes.  To my dismay, the original knife was silver, too.  I had just missed it.  But, even with this new bit of information, I didn't feel the need to go out and get a new swivel arm Grunt that was then available.  I just shrugged it off and largely forgot about Grunt for a long time.

In the comic, the Grunt character didn't begin as all that interesting, either.  His early runs are not memorable and he was overshadowed by Clutch, Rock and Roll and Hawk.  Heck, even Short Fuse got a few memorable lines.  But, this lack of defined story helped Larry Hama do something with Grunt.  He left the military to go to college.  He then aided the Joes in a few story lines and, ultimately, returned to the team.  (Though, his awful 1991 figure isn't really representative of his look during the transition.)  So, the Grunt character that I know is mostly based on the late 1980's story arc for Grunt and his interaction with characters from that time of the book.

My experience with Grunt, though, tends to be unique.  There are a great number of collectors out there who count Grunt as their introduction to the Joe line.  He was supposed to be the standard American fighting man and his appearance on Joe product packaging of the early '80's indicated this.  So, Grunt was often the figure chosen by adults for gifts or treats.  So, you'll see him occupy high slots on many collector lists.  While I'd rank Grunt firmly in the lower middle of the original releases, he remains a hugely important part of many people's collections.
Grunt's enduring legacy was that he was the "face" of G.I. Joe in 1982.  In fact, many kids assumed he was "G.I. Joe" himself.  Grunt's iconic artwork appeared on most of the Joe promotional material.  He was used as the background for merchandise that wasn't tied to Hasbro's 3 3/4 figure line.  Grunt represented the American fighting man.  And, his look was used to convey that fact.  And, that may be part of the reason that Grunt isn't all that interesting as a toy or character.  He was meant to represent the everyman.  And, everymen are bland by design.  Extreme character traits alienate them from their base.  So, they are just there.  Grunt provides a connection to soldiers from prior wars and allowed an entry point for parents and grandparents to introduce G.I. Joe to their kids.  So, he was hugely successful in that regard.

As a figure, though, Grunt is well done.  Not only does he feature more paint applications than most of the other carded 1982 designed Joes, he also has nice accessories.  The figure has brown, black, silver and green paint to accentuate the figure design.  (And, note the bright green pockets.  Neon was part of the Joe line since 1982.)  And, he includes a helmet, backpack and classic M-16 rifle.  If you were a kid in 1982 without the story that would come, there was little to differentiate Grunt from most of the other figures hanging on retail shelves.  But, for me, Grunt lacked the "it" factor.  Stalker, Snake Eyes, Rock and Roll and Flash were all must buys.  While I didn't much care for Scarlett, she was memorable.  Zap and Short Fuze were interchangeable and not all that interesting.  Breaker's gear pushed him ahead of Grunt.  When you add in vehicle drivers, Hawk is non-descript.  Clutch is awesome.  Steeler is right behind him.  And, if you like Flash, you kind of have to like Grand Slam.  Caught in the space between good and bad leaves Grunt as forgotten.

There is an interesting anecdote about Grunt.  At one time, there was a person who wanted to make a massive military diorama.  He would choose to only use 1983 Grunt and 1983 Tan Grunt figures to comprise the humans in this endeavor.  It never came to be, though.  And, in the mid 2000's, tons of Grunts who were still in their bubbles, but had the rest of the card torn away became available.  (A monstrous supply of Tan Grunts still in the bubble became available, too.)  It's not known if this person got the figures from Hasbro or just bought them at retail.  But, it's an interesting story and the reason why you'll still find bubbled Grunts on torn away cardbacks to this day.

As with all the original 13 Joes, Grunt was a world traveler.  The straight arm figure was released in Argentina, Brazil and Mexico.  His parts were used for exclusives in Argentina, too.  The swivel arm figure was repainted in 1983 and appeared through the years in various mail aways, catalog premiums and promotions.  Hasbro reformed most of Grunt in 1997 for inclusion in the Stars and Stripes set.  But, after that, Grunt didn't really appear.  His shared chest appeared a in the 2000's in comic packs and convention sets.  But, a repainted Grunt character never did.  Grunt's comic pack release was a new head on a repainted 1994 Action Series body.  (It's a cool figure, but not an homage to this Grunt.)  While I don't really miss Grunt repaints, there's no reason he didn't appear later in different colors.  But, there's enough Grunt releases from outside the U.S. and U.S. releases repaints to keep the Grunt collector busy for quite a while.

As Joe prices have risen drastically since the fall of 2017, the early Joes have been heavily caught up in the tidal wave.  Beware figures with the incorrect rifle.  Grunt's rifle is unmistakable, but many dealers will still put an incorrect version with the figure to command a premium.  Mint and complete Grunt figures sell between $35 and $45 with some dealers even getting $70 with far too much frequency.  But, the figure is very prone to discoloration, paint wear and joint degradation.  This does mean, though, that you can get slightly off condition figures for cheaper prices.  But, we're long past the days of cheap Grunts making up a slew of greenshirts for a casual collector.  Grunt is still cheaper than many of the more popular members of the original 13.  But, I'd never pay those prices for one since the figure just doesn't resonate with me. 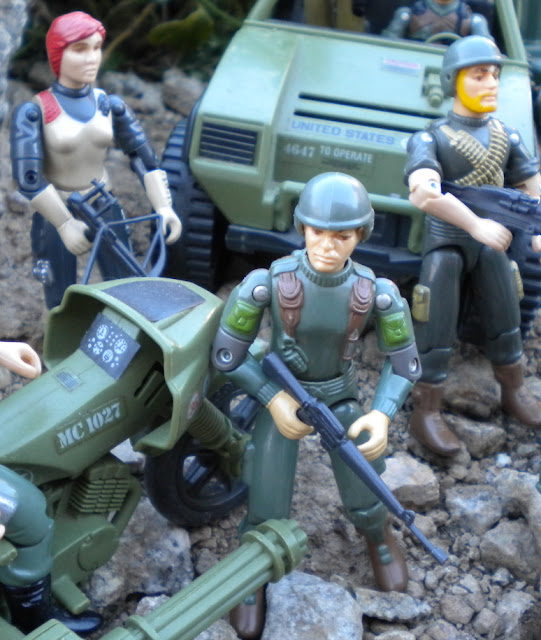 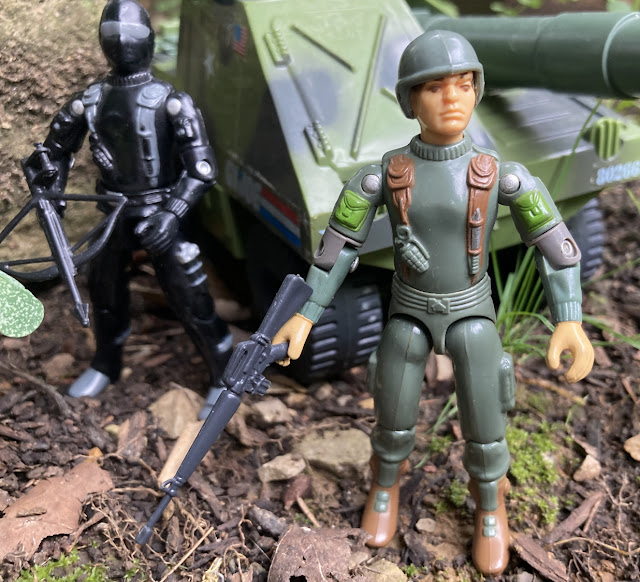 Posted by Robot_Sonic at 1:32 AM
Email ThisBlogThis!Share to TwitterShare to FacebookShare to Pinterest
Labels: 1982, 1983, Grunt, Original 13