In the vintage line, major characters were redone: but relatively rarely.  You could argue about Stormshadow's overall rank in the pantheon of Joe characters.  But, pretty much everyone would be in consensus that he's top 5 at least.  Despite that, Stormshadow only got three unique molds in the vintage line: 1984, 1988 and 1992.  It is this 1992 mold that is of interest to me this week, though.  This figure was repainted several times in the vintage line, both as Stormshadow and other characters (including Street Fighter repaints).  In 2000, though, Hasbro dusted off the mold, made some modifications and released it with a real o-ring.  At first, collectors liked this idea.  But, the novelty wore off and Hasbro then proceeded to repaint that update twice more.  The first of these repaints appeared in 2002 as a member of the BJ's exclusive gift set.  While the figure was released as Stormshadow, the figure was given an all red paint scheme and was quickly adopted as a classic red ninja by the collecting community.

In late 2002, when this figure was released, it was the best red ninja that Hasbro had ever made.  The 1993 Red Ninja figure was just terrible and, even in 2002, somewhat expensive and hard to find.  No one (except one person!) wanted to army build them.  In the summer of 2002, a red Slice repaint was made available.  Some collectors adopted this as an army builder.  But, that Slice was released with a Joe character and there was little incentive for most collectors to army build him when his wave also included a Viper and Alley Viper. When this Stormshadow appeared, collectors (who were army builder nuts at the time) quickly adopted him as the classic army building villain.  This was partly due to the fact that BJ's set included other army builders and collectors were desperate to find uses for the other figures that would help justify additional set purchases so they could get more Undertows and Fast Blast Vipers.  So, this Stormshadow was quickly rebranded by dealers and Ebay sellers as a red ninja.  Heck, even I got in on the game as I bought a few spare figures from sellers who were trying to recoup a couple of bucks for their real army builder splurges.

As a red ninja figure, though, this Stormshadow kind of worked.  He matched the 2000 Stormshadow and allowed collectors to have a themed army behind a classic character.  And, as many collectors of the era saw their collections comprised of mostly recently released to retail figures, such a configuration was often the only representation of Stormshadow that many people had in their collections.  You'd see photos of four to six of these figures from time to time.  But, the reality is the limitations of the mold quickly manifest themselves and make this figure the neglected release he is today.
The basic body construction of the figure is the main problem.  The original figure was modified so that this version has an o-ring.  The waist and chest separate.  While this is the more classic vintage Joe construction, the reality is that this figure has no back screw.  So, if the o-ring breaks, you have no recourse to repair it.  This also makes the figure somewhat stiff and difficult to pose.  If that weren't enough, there are two blocky tabs on the bottom of the figure's torso.  These fit inside the waist and hold the waist and torso together as one part.  So, if you want to pose this figure in similar manners to vintage Joes, you have to clip those tabs off the figure or have them awkwardly protruding from the figure's waist.  It was a noble attempt to bring a solid mold into standard construction.  But, in some ways, they made the figure worse than if they'd kept the standard 1992 design.
My initial impressions of this figure were favorable.  The red is deep, dark and fits with most people's visions for Cobra.  As a display piece, the figure works well.  And, for a short time, I went about acquiring a few extras of the figure to have a small army.  Once in hand, though, the limitations of the figure became more obvious and pronounced.  The poor mobility really limited this figure.  And, once the Red Ninja Viper was released in late 2004, there were now better Red Ninjas for collectors that were cheaper and more available.  So, this figure fell out favor with me and was relegated to the bottom of his drawer.  Due to the fact that he was absolutely worthless in the early 2010's, though, I held onto my samples during my collection purge since there was no value in selling them.  I'm grateful for that as this figure is visually interesting, even if he's kind of otherwise limited.

The BJ's set figures came in two flavors: well deco'ed and basic.  Stormshadow falls into the basic category.  The figure only features black body and leg highlights and a white Cobra logo.  The figures hands, boots and mask are a somewhat brownish/black color.  It is tough to see.  But, fits with the non-traditional color choices that permeated the BJ's set.  The figure does have white eyes with black accents.  But, it's about as basic as figures of this era came.  In this case, the simplicity kind of works as Red Ninjas are supposed to be about their primary color and not tons of accouterments.  This Stormshadow is visually striking due to the stark contrast of the base red and the smattering of additional color.

The BJ's set featured terrible accessories.  There really isn't a way to properly communicate how terrible they were.  In most cases, it would have been better if the figure included no weapons at all.  Stormshadow, sadly, included some of the better gear in the set.  Of course, it was only better because you could use it elsewhere and his weapons, mostly, made no sense.  His first weapon is the JvC era crossbow that first appeared with Scarlett.  The weapon is in 3 pieces: rifle, bow and arrow.  It seems cooler than it is.  But, it's tough for a figure to hold and falls apart on a whim.  Were it better designed, the weapon might have made sense.  But, with the added sound attack tab, it was just a terrible choice.  Stormshadow's other weapon is the Red Star AK-47.  In late 2002, the inclusion of this weapon was welcomed.  At the time, the rifle was still relatively scarce.  And, collectors had just bought dozens of repainted Alley Vipers and Vipers who had terrible weapons.  So, this Stormshadow became a weapon donor to other army builders.  In time, these weapons became more common and it's inclusion with this Stormshadow is no longer the rarity that it was upon the time of the figure's release.  Fortunately, if you bought retail Joes in the early 2000's, you were likely to have tons of spare ninja weapons.  So, it's not impossible to outfit this figure with better gear.  It's just frustrating that you have to do so.

This Stormshadow mold has a long history.  It debuted in 1992 in the Ninja Force subset.  In 1993, it was repainted as T'Gin Tzu.  In 1994, the mold was released in translucent plastic as part of the Shadow Ninjas subset.  In 1993 and 1994, the body mold was used for the Street Fighter Ken Masters figures.  There is a red version and blue version that feature new heads.  Was this mold able to be customized, those Ken Masters bodies would have dominated custom figures of the late 1990's and early 2000's.  But, as the bodies were fused together, there was no incentive for customizers to really explore the LBC possibilities.  In 2000, Hasbro modified the mold with an o-ring and released an 1984 homage paint job.  This red version was released in 2002.  And, there is an Urban Assault version that is grey and black that was released in 2004.  Fortunately, that was the end of the mold as the 1984 and 1988 Stormshadow molds became the de facto Hasbro releases for the short remainder of the repaint era.  If you're a fan of this mold, you have good paint jobs, classic homages, terrible paint jobs and gimmicks to track down.  But, few collectors are fans of this mold and pretty much all of its uses are ignored.

None of the BJ's figures are expensive.  Despite it being a relatively difficult release to acquire for many collectors, it hasn't found the aftermarket life that most of the other ARAH style figures from the early 2000's have seen since January of 2018.  This Stormshadow will run you $8 to $10 for a mint and complete with filecard version.  If you want spare figures, they run about $5.  And, if you check lots of miscellaneous 2000's era figures, you can often find this guy offered even cheaper.  Huge amounts of overstock figures that were available from Asia as well as massive clearances on these sets, though, have made figures like Stormshadow far more available than they might have otherwise been.  And, there are substantially better Stormshadow molds out there that have gotten the red paint treatment: either from Hasbro or by factory custom makers.  That leaves this figure as a relic of his era.  I haven't even pulled this guy out for a photo shoot since late 2002.  So, he doesn't even really register with me and my whole shtick is figure releases like this. 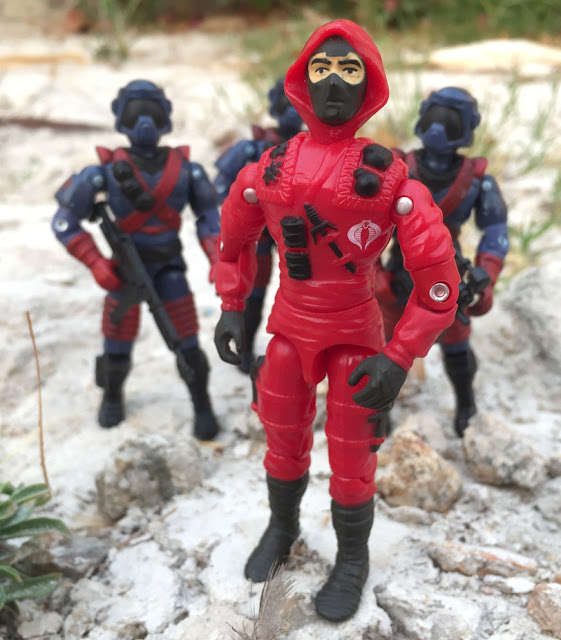 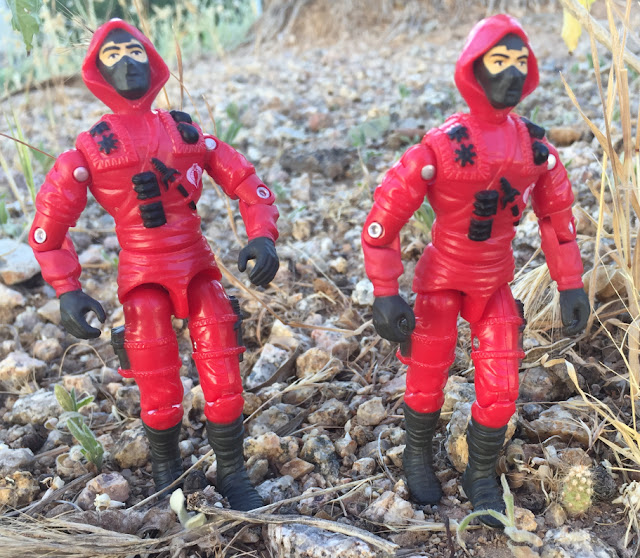 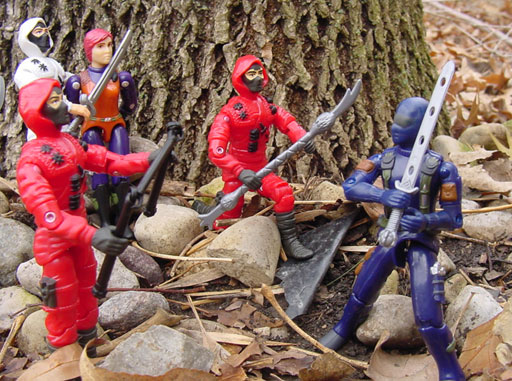 Posted by Robot_Sonic at 12:59 AM
Email ThisBlogThis!Share to TwitterShare to FacebookShare to Pinterest
Labels: 2002, BJ's Exclusive, Retailer Exclusive, Stormshadow