In the early to mid 2000's, tons of weird Joe figures started appearing for sale from Asia G.I. Joe sellers.  At first, the community wasn't sure what to make of these figures.  Slowly, though, it became obvious that many of them were legit unproduced concepts that were changed prior to production.  Of course, these figures caused a rift in the community.  Some said they were stolen or that Hasbro would repossess them.  The Club got super duper butt hurt when some of their convention figures leaked early from Asian markets.  Others, though, loved the chance to get something different than what was released at retail.  And, some of the figures ended being far superior to anything ever released in stores.  These figures were a staple of mid 2000's Ebay and were even available from some kind of sketchy websites for a few years afterwards.  Among the releases, though, were a wide disparity of offerings in terms of rarity.  Some figures were insanely common, always available and sold cheaply...even if they were excellent figures or army builders.  Others, though, were far less common and only appeared infrequently or not at all on public sites.  One of the rarer figures is this Caucasian Stalker figure from the Toys R Us Desert set from 2004.

There's no way this figure was ever considered for release.  The figure's white skin and blonde hair is an obvious holdover from when this mold was used for Duke.  It is possible that these figures were mold tests to see how the colors worked out.  Aside from the skin tone, the other obvious change is that the straps, holster and gloves of the figure are in a leathery brown color scheme instead of the much darker, greyer color of the production figures.  And, while this figure is an oddity, it's a fun oddity because it's both so different from anything released but uses one of the best Hasbro figures of the era as its base.

For a while, I was heavily into the alternate, Asian releases.  The figures were cool in some ways.  But, I'm someone who likes lots of variety.  So, having figures in alternate color schemes was fun.  Sadly, most of those figures were sold during my collection purge from a decade ago.  And, now, there's no way I'm paying 10 times the original prices to get them back.  Few figures offered something different enough from the production figure to be worthwhile.  This Stalker isn't one of them.  The retail figure is far superior.  Though, this look makes for an interesting display piece.

These days, the once common Asian figures have dried up and have gotten pricey.  This Stalker will sell for stupid amounts and many modern collectors will talk about how there's only a "few" of them: not realizing how common most of these figures (even the Tiger Force Steel Brigade) were in the mid 2000's.  But, the figure is a conversation starter and, even at the time of its creation, was rarer than most of the other "Midnight Chinese" figures that overran Ebay. 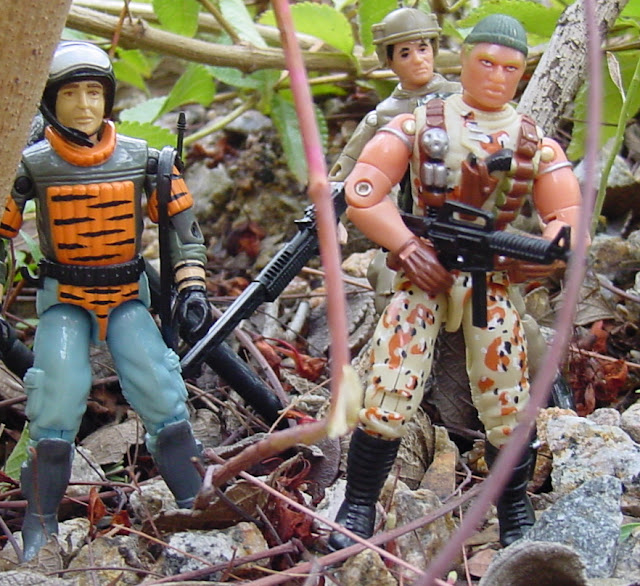