Summer's in my childhood were spent visiting relatives.  We'd often take several weeks and go see my aunt and uncle or my grandfather.  It was a way for my mother to spend time with us, get a small vacation and take care of familial obligations all at once.  The upside is that I got to spend time in different towns each summer.  The downside is that all of relatives' homes were dreadfully boring.  They didn't have much in the way of toys and, in the cases where my cousins did have toys, the New York school year went much longer than ours and we'd be in their neighborhood while they were still in school.  The result is that, when we went shopping, I was usually able to get a toy or two to alleviate boredom.  In the summer of 1984, the figure that sticks out in my mind was the 1984 Recondo.  I found him at a K-Mart in Chillicothe, Ohio.   They had two figures: Recondo and Ripcord.  But, all of Ripcord's gear had been ripped out the package.  So, Recondo it was for me.

With the figure in hand, I returned to my aunt and uncle's house and spent hours playing with Recondo and the Mountain Howitzer out in their front yard.  They had a bit of an incline that sloped away from the concrete driveway.  So, the Howitzer was perfectly positioned to rain down upon the enemy.  But, for some reason, I had no enemy figures with me.  I had not brought many toys with me on the extended trip.  So, my time was spent with these two toys and my imagination of the great things Recondo would do once I got home.  And, when reunited with the remainder of my collection, Recondo did become the great figure I had imagined...for a time.  Eventually, the figure got old and worn and I lost interest as newer figures entered my world.

Some time in late 1985 or early 1986, I began making my first custom Joes.  I took figures that were old, or broken and concocted new characters from the existing parts.  I created a new Joe leader, a few of his loyal soldiers and a group of 4 distinct warriors who became the focal point in my world's battle against Cobra.  Three of these four consisted of figures made from Snake Eyes, Footloose, Barbecue, Flint and Bazooka figures that had been upgraded after I had lost accessories or broken a thumb or crotch.  The fourth figure, though, was different.  Using a Recondo chest and Grunt head, this character was the wiser, older sage of the group.  He was the mentor to the younger fighters and was the one who guided them through their adventures.  But, one of the thumbs on this figure snapped.  And, I had no replacements.  With this, the character died.  And, in doing so, caused a rift to develop in the group.  With no older leader, the most capable began to do things on his own.  Eventually, he would rise to #2 on the Joe team.  The other two, eventually, broke down mentally.  Unable to fight any longer, they disappeared.  Occasionally, they would reappear.  But, for the most part, the death of this character destroyed the most potent force that the Joe team had against Cobra.

One of the reasons that I used Recondo parts, though, was because I had upgraded my Recondo figure.  And, after Recondo's comic appearances in 1985, I needed a good Recondo to take up the role as he was portrayed in the comics.  His original comic run was just too memorable to allow the figure to wallow in obscurity.  And, with this newfound importance, Recondo remained a vital part of my Joe team until the figure got worn from overuse and was replaced by newer releases.

For me, Recondo's gear has always been both a disappointment and one of the highlights of the line.  As a kid, Recondo's pack was the pinnacle of backpack design.  It was full of survival gear and had the handy, practical and cool handle to give it both function and pizazz.  I painted up my Battle Gear versions of his pack to showcase the details that were sculpted into it.  Any time a team was going into the wilderness, at least one member of that team needed to be wearing a Recondo pack.  It was necessary.  (I REALLY wanted the pack to work for Ripcord.  But, for some reason, Ripcord's plain shirt and the pack didn't work for me.  These design mismatches didn't bother me on scores of other figures.  But, it did for Ripcord.  I'm weird.)  Recondo's rifle, though, was more problematic.

I'm not sure why, but Recondo's gun never clicked for me.  While it was decent enough with Recondo himself, the gun didn't transfer to other figures.  To this day, I can't see the rifle with anyone other than Recondo.  It just looks out of place with any other figure.  Conversely, though, I also find it tough to see Recondo with any weapon other than his original.  In the photos below, I attempted a couple of different weapons with Recondo to see if they clicked.  The M-32 from Stalker is OK.  But, it seems too small against Recondo's larger forearms.  Ripcord's rifle seemed great in theory.  But, I'm afraid of it snapping this Recondo's 36 year old thumbs.  So, it's posed in ways to showcase it with the figure, but not with him actually using it.  In the end, I'll stick with Recondo's original weapon as it's just a perfect match to the figure.

Recondo appeared around the world.  The original version was released in the U.S. as well as Europe.  From there, it went to Brazil where Estrela released him in a slightly darker green as Leopardo.  Auriken then released a similar figure in Mexico.  Recondo parts were used for the original version of Starduster, before being quickly replaced.  The Tiger Force Recondo appeared in 1988.  And, then, nothing.  Well, not entirely nothing.  Recondo joined Flint and Spirit as figures who appeared on the cardbacks of Plastirama figures that were released in Argentina.  However, none of the three were ever produced.  Many of Recondo's contemporaries later showed up in India as Funskool releases.  But, Recondo never appeared again after the 1980's.  The mold was highly requested in the 2000's, but never came to be.  While Recondo's sculpt had a lot of potential for later repaints, the two main flavors (original and Tiger Force) are both excellently done and leave collectors with high quality examples to track down.  Factory Custom makers have redone Recondo's chest for various Starduster figures.  But, they have yet to use it outside of Starduster repaints.

There are a few Recondo variants.  The timeline of when each was released seems unclear.  From the best I can tell, the thick stripe "brown" variant (the brown is actually an olive green) was first.  Then, the paint masks changed to a thin brown version.  Then, there are two bright green versions, a thick stripe cammo and this thin striped cammo.  It should be noted that Leopardo from Brazil uses the thin cammo paint mask.  It's likely that some of the variants were mail away exclusives and some may have been heavily released in Europe, too.  In my experience, the thick stripe bright green cammo figure is the toughest to find.  But, I've only looked casually.  So, other's experiences may vary.  Please comment on your findings in the comments below.

Growing up, I had only the brown cammo versions.  I didn't know these alternate designs existed until well into my collecting career.  But, even in my time of mass acquisition, where I had several Recondos, I never acquired anything other than the brown cammo figure.  So, finding this thin, green version was nice.  I didn't have to pay a premium for it.  And, the green gives the figure more flair.  He seems more like a jungle fighter than a more desert figure like the brown cammo version does.  It should be noted that the color of Recondo's leg cammo should match the color of the wristwatch on his left hand.  If they do not match, you have a kitbash that was put together from different figures.  This consistency remains constant across all the Recondo variants.

Nicely conditioned and complete with filecard Recondos sell in the $25 range with dealers getting up to $35.  There are times when certain leg color variants will get hot and sell for much, much more.  In short, Recondo is one of those iconic Joes that everyone needs to own.  But, the variants remain the realm of diehards who really love the character.  For me, any look will do.  But, after owning one figure for more than three decades, it was nice to get a new version of a childhood favorite...even if the differences were subtle.  Like most relatively popular '80's Joes, I'm glad I got my Recondos before 2018.  While he's great, he's also a lot more expensive than when I fleshed out my collection.  But, like obscure foreign releases, these variants give an old favorite some new life. 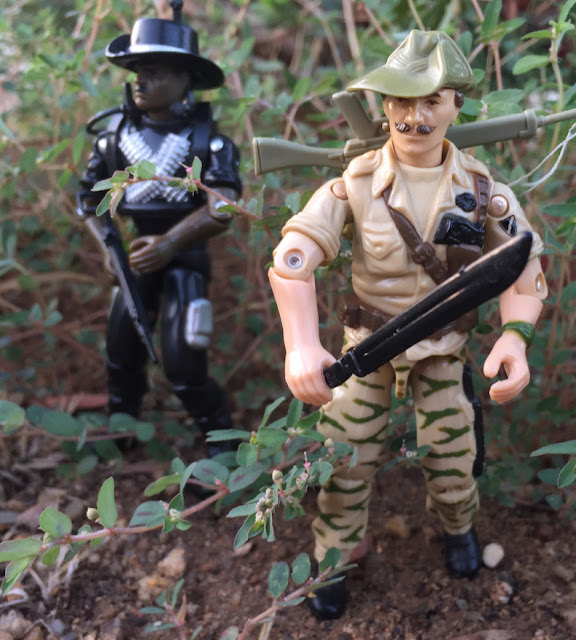 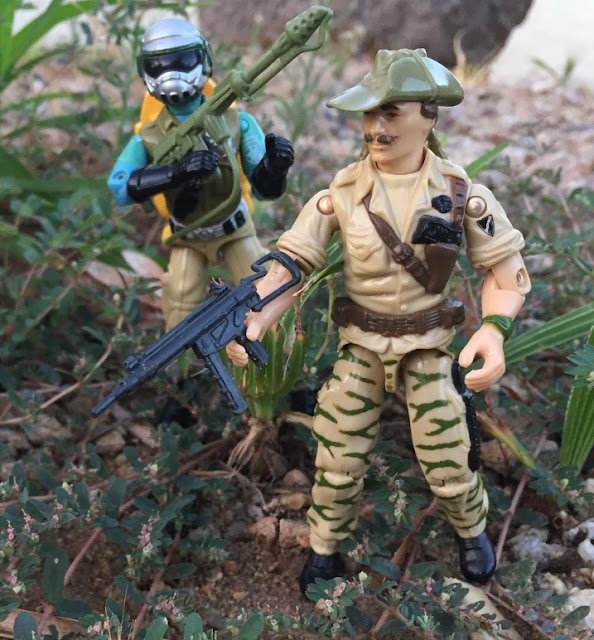 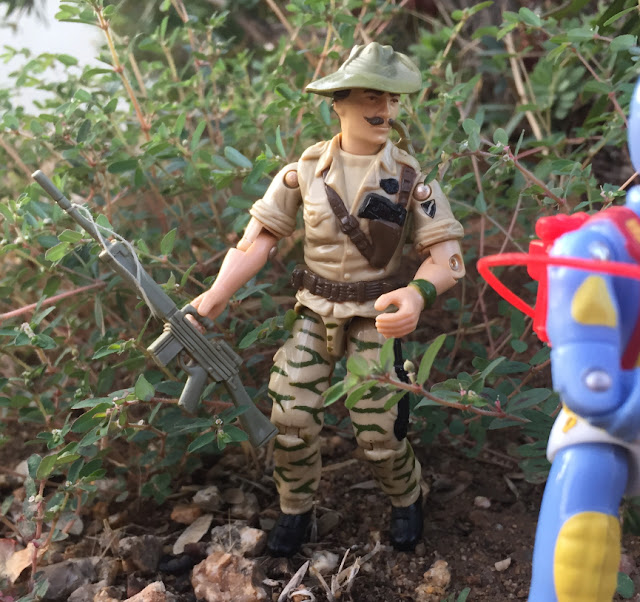 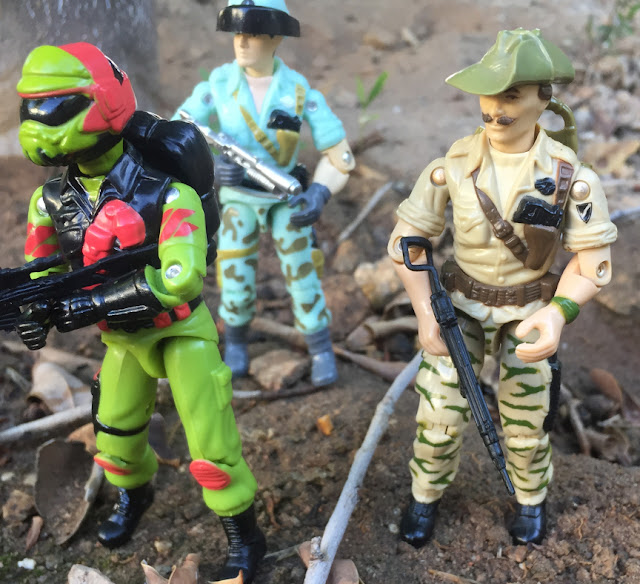 Posted by Robot_Sonic at 6:05 AM
Email ThisBlogThis!Share to TwitterShare to FacebookShare to Pinterest
Labels: 1984, Recondo, Variant