Terror on the Tundra Mail Away Promo

In looking back on my early days as a collector, I often wondered why I didn't order any mail aways from Hasbro.  From 1992 through 1995, I had money, a checking account, plenty of flag points and a desire to own more G.I. Joe figures.  Yet, I never ordered any mail away items.  At the time, Hasbro offered a combination of classic figures and vehicles from my childhood along with a ton of new figures that, even back then, were really cool and desirable to me.  My lack of interest in these items, though, is quickly refreshed when I look through a booklet like the Terror on the Tundra promotional offering from 1992/1993.  While the booklet features tons of great toys, the prices seem overly exorbitant for the time.  For someone on a budget, it was far cheaper to buy figures and vehicles at retail.  In time, my view on this would evolve.  But, we'll get to that....
The Terror on the Tundra promotional booklet is different from many other promotional inserts because it is an actual booklet.  Traditionally, Joe vehicle inserts and catalogs had been fold-outs.  Terror, though, is a glued booklet of 4 pages with a fold out order form on the back cover. 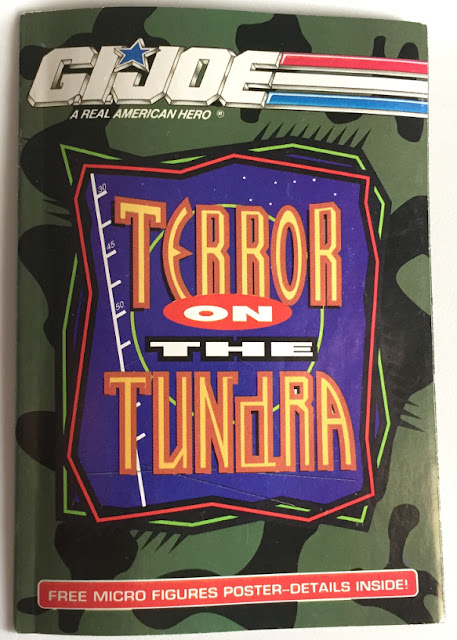 The first pages when you open the booklet show the golden Serpentor figure and the 1983 FANG.  In 1992, both of these were long gone from retail.  And, Serpentor's bold look was sure to appease some kids who weren't old enough to have seen the toy on store shelves.
The adjoining page showcases some lesser items: the Battle Bear and Pac Rats.  I was never a Battle Bear fan.  I always found the toy brittle and too small to really be fun.  The front skis really limited it as something that could transition out of the arctic.  Pac Rat, though, were even worse.  I never got more than one of the Pac Rats as a kid as I had zero interest in them.  They couldn't interact with figures and just didn't look that cool. 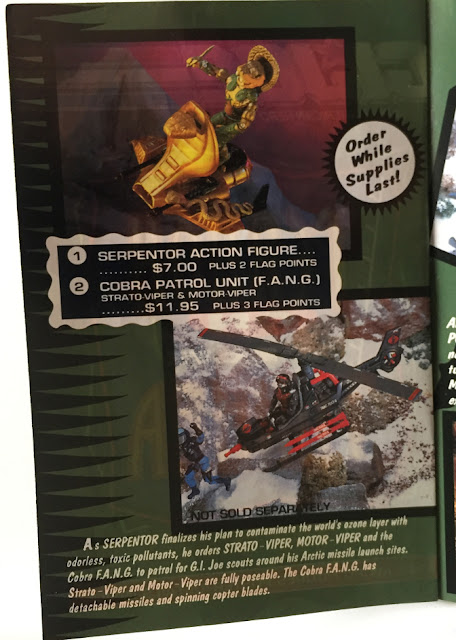 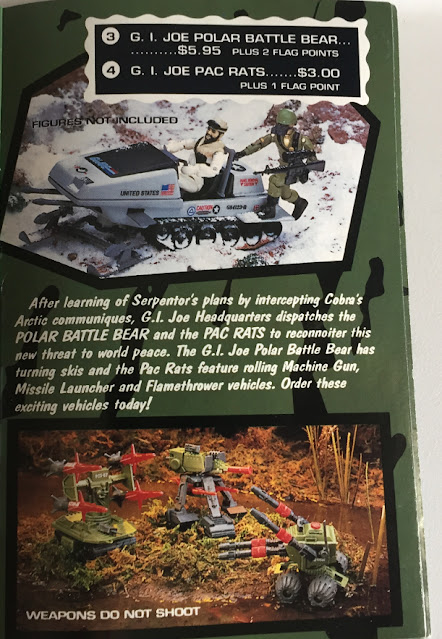 The next pages include two great toys.  The Cobra Wolf is one of the best designed Cobra vehicles.  The limitation of the front skis as I mentioned on the Battle Bear didn't come into play here since the vehicle was that good.  For the Wolf, I either redid my entire adventure in the arctic, or I'd have Cobra airlift a Wolf onto dry land where it could still use its weaponry.  If you mailed away for this Wolf, you'd have likely gotten the mail in variant.  The most notable difference is the black missile door...which looks kind of odd.  But, this is the source of the harder to find variation.
The Adder came out past my time as a Joe collector.  So, I never had one.  But, it's a solid toy that should get more press.  Some day, I'll buy one just to showcase here. 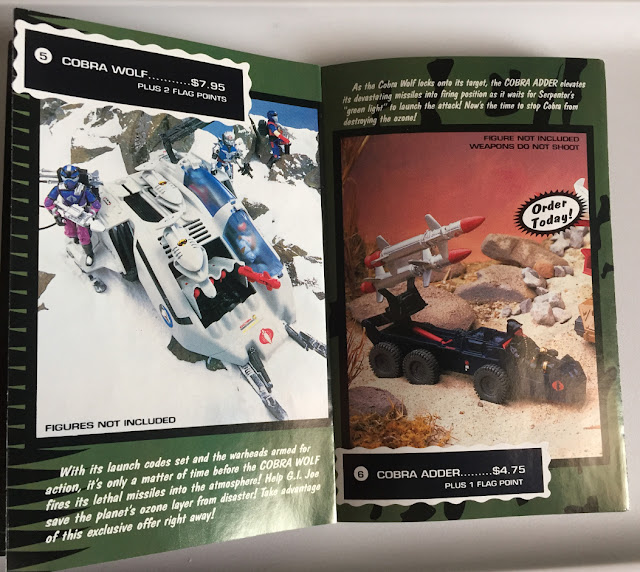 Then, we see the worst and the best offering in the mail away packet.  The micro vehicles are terrible and not something I'd have ever wanted.  Above, them, though, is the mail away, no cammo variant Slugger.  This remains one of my grail pieces since it's so stark a difference versus the retail toy.
The big dog, though, is the Whale.  I can assure you that I did ponder buying a new Whale to replace the two heavily worn versions I had in my possession during the 1990's.  The whopping $29.95 price tag, though, was a turn off.  Back then, that was 5 hours of work before taxes. 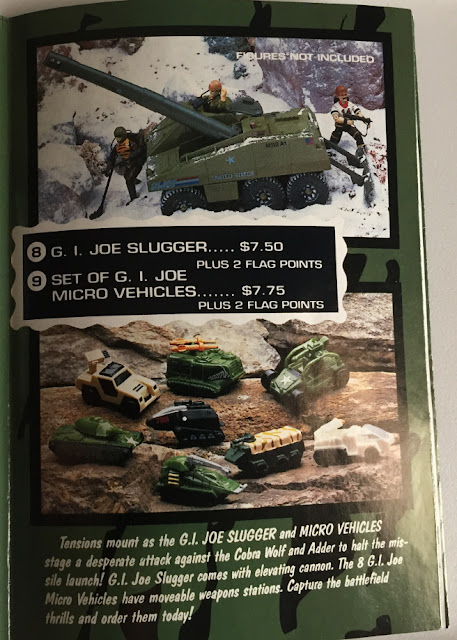 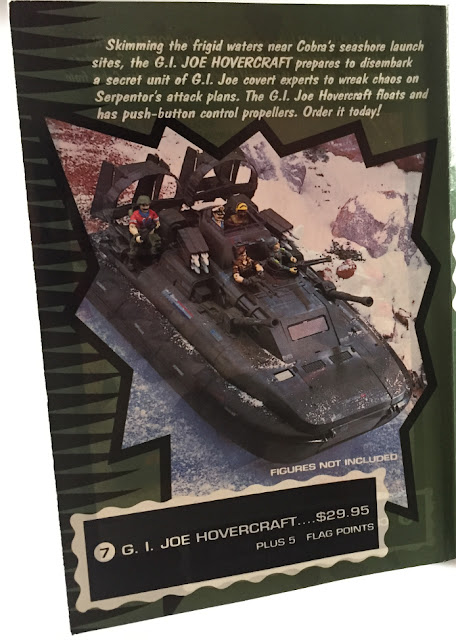 The final pages of toys feature the iconic Hiss Tank and some figures.  The Hiss was a staple of any Cobra army.  And, it's long mail away life has helped ensure ample supply of Hiss Tanks even to this day.
The figures are notable for a few reasons.  Everyone's eyes turn to the Ninja Viper.  This aqua green Stormshadow repaint has become a figure du jour among the nuveau collector set.  But, really, this is a somewhat boring redo.  Had this figure been red, it would be a $500 purchase today.  But, it's not.  You will notice the pre-production figure, though, that has his mask painted in.  We'd see this first on the 2000 Firefly figure and this detail would have helped distinguish this figure from the classic Stormshadow mold.  But, this paint application was removed before the figure went to production.
The Iceberg and Hawk, though, are more interesting.  Hawk included a 1991 Cobra Commander gun.  And, Iceberg included the 1990 Rock Viper rifle.  Bagged, both figures are incredibly hard to find today...even harder than bagged Ninja Vipers. 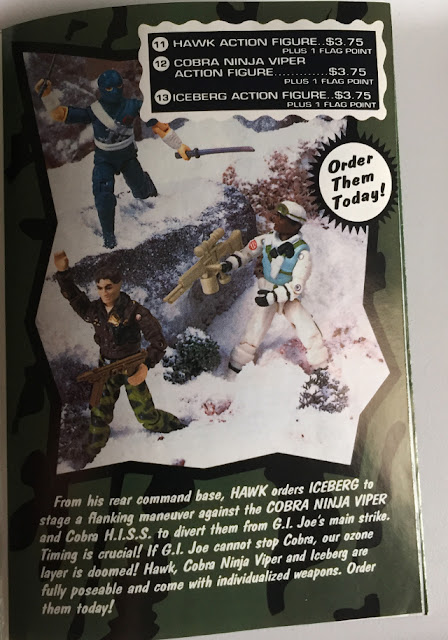 And, then finally, we see the coup de gras: the Gold Head Steel Brigade.  I cared so little about the Steel Brigade figure that I never noticed that this version in the Tundra booklet was different.  The figure was simply too expensive to ever hold my attention.  That seems dumb, now.  But, were this figure not rare, few would care about it. 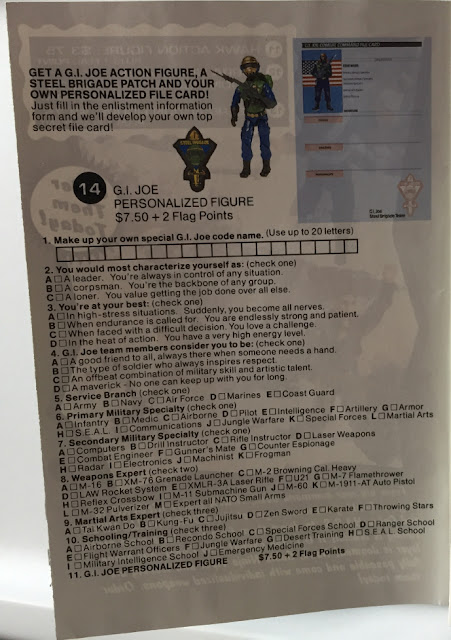 Look at these prices.  It doesn't seem right that a set of 3 Pac Rats was cheaper than one figure.  But, that was the oddity of the mail away premium.  You'll note the free Micro Figures poster with a purchase of $15.00 or more.  There's a pull out showing the poster that I didn't bother to photograph as I have that little interest in micro figures or vehicles. 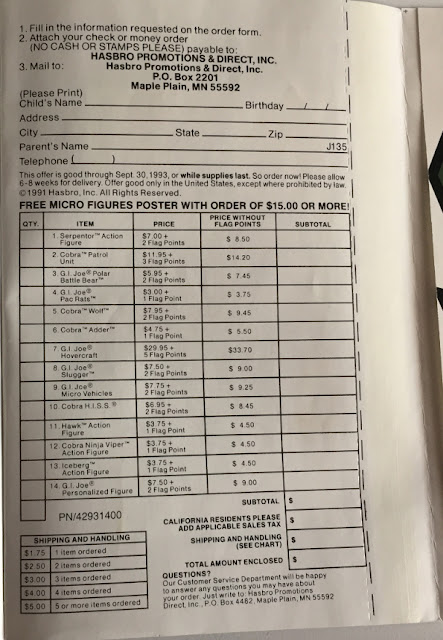 To say that I had no interest in mail aways is a bit overstated.  After the onslaught of POTFII toys in 1995, I began to take collecting a bit more seriously.  I tracked down the final figures and vehicles that I could find at retail.  As those began to dry up, frustration set in.  In the wasteland that was late 1995/early 1996 retail, I looked at the mail away booklets again.  Thinking I could finally use up some old flag points, they seemed an outlet to get new toys...even if they were more expensive than I would have liked.  Alas, though, the clock had run out.  Every promotional item I owned had expired in 1995 at the latest.  So, when I finally came around in my desire to buy up mail aways, the ability to do so had aged out.  At one time or another, I thought of simply sending in a filled out form and a check to see what would happen.  Maybe there were still figures left.  I never did this, though.  I'm not sure why as it would have been a "nothing ventured-nothing gained" scenario.
Knowing what we know today, had I mailed in an expired form, it could have gone either way.  If Hasbro still had stock, they might have sent something.  Clearing out a warehouse was better than returning money.  But, in 1994, Hasbro did clear out their mail away warehouse in northern Ohio.  Almost all the bagged mail away figures from the 1990's can be traced to this event.  (A grocer in Ohio bought a ton of bagged G.I. Joe figures and sold them for .99 in their stores.  They're harder to find now, since the price tags wear off.  But, you can still find tons of bagged figures with those old grocery price stickers on them.)  So, it's unlikely that Hasbro would have had any stock left to sell.  G.I. Joe collectors in the late 1990's reached out to Hasbro to see if they had any old stock left over.  But, they did not.
The reason collectors did reach out to them, though, is the same reason that I still might have had a chance at getting something from an expired form: the Hasbro Canada find.  In 1999, collectors learned that Hasbro Canada did have a massive amount of old mail away figures and vehicles that were overstock from the mail in premiums from a few years before.  Once this news broke, collectors quickly filled out the forms, mailed in their checks and awaited full packages of bagged Cobra Officers, Thunders, 1992 Air Commando figures, Crankcases, Motor Vipers, Strato Vipers, Sky Hawks, Nitro Vipers, Keel Hauls and Firebats (to name a few of the items....).  They arrived to great fanfare.  And, again, to this day, almost all of the bagged samples of those figures can be traced to the Hasbro Canada find and the last hurrah of vintage retail Joes that collectors could find.
In the days of $700 Gold Head Steel Brigade figures, balking at paying $7.50 for one seems foolish.  But, 25 years ago was a very different time.  Even into the early 2000's, bagged version D Steel Brigades were $5 figures.  And, it was not uncommon to find a GHSB included in a lot of undesirable neon figures that collectors of the day avoided like the plague.  Many of my fondest memories of childhood involve getting a package of mail away Star Wars or G.I. Joe figures in the mail.  So, not spending a modest amount to relive that experience seems odd.  (I did partake in both the Han Stormtrooper Fruit Loops promo and the Spirit Ben Kenobi Lays promos shortly after the Joe premiums expired.)  But, I was a college student instead of a kid.  And, it was cheaper and easier to just go to the local TRU to buy a new figure or two.  So, I don't hold too many regrets.
Like pretty much all Joe paperwork and promotional items that were included with standard figures and vehicles, the Terror on the Tundra packet is worthless.  Dealers sell them for $1.50 and it's probably not worth their time to do so.  You'll often find them in bags of cheap one-price-fits all catalog boxes at various collectible stores.  The booklet is common, undesirable and cheap.  Which, isn't bad.  It's kind of funny to know how expensive these figures were back in the early '90s and compare it to how ridiculously expensive figures like the Ninja Viper are in the 2020's.  But, it's also kind of sad.  Booklets like this hearken back to when Joe was a fun toy line that was accessible to everyone.  Now, it's becoming a hobby that prices out many newcomers.  Joe collectors have always found new heights of snobbery for a hobby that's focused on the 2nd most common boys action figure line ever made.  2020 has just made that worse.
Posted by Robot_Sonic at 8:15 AM
Email ThisBlogThis!Share to TwitterShare to FacebookShare to Pinterest
Labels: 1992, Mail Away, Paperwork