From 2003 through 2005, Hasbro produced exclusive packs of vintage style Joe figures for Toys R Us.  These packs were 6 figures (aside from the first set) and were priced at $20 per set.  They were designed to appeal to collectors, but also be interesting to casual consumers who were looking for a gift at a targeted price point.  I am both an ardent supporter and harsh critic of these figure releases.  I loved that we got vintage style Joes.  But, in almost every case, the actual figures that were released left something to be desired.  In looking back a the sets now, I see that many of them had one or two great figures.  But, those were offset by an equal number of terrible figures.  This dichotomy lead to me overlooking many of the figures in these sets from a review standpoint.  In the 16 years since these sets started shipping, I've looked many members of these sets: mostly Cobras, though.  For the Joes, I usually hit one or two sample and then move on.  For the Desert Patrol set from 2004, I've only reviewed the Snake Eyes figure.  And, that was a half hearted pseudo profile.  The highlight of the Desert Patrol has had to wait more than 15 years to get a moment in the spotlight.  But, the Stalker figure from this set is one of the best toys that Hasbro produced during the repaint era and deserves some praise.

It's not 100% true that this figure has waited so long to appear on this site.  In late 2005, the unproduced version of this figure (with white skin and blonde hair) was one of my entries.  That profile was mostly about the rare oddity of the figure, though.  It didn't touch on the overall quality of the Hasbro release.  When looking at this Stalker, though, it really only has a single flaw: the unpainted mustache.  Hasbro was terrible at painting facial hair.  I suppose this was a function of them either attempting to make the figure distinct, or just trying to save a fraction of a penny.  The upside is that a missed mustache is easily fixable.  But, I'm not someone who enjoys altering things on a figure that should have been done right the first time.  But, the rest of the figure is such high quality that I will overlook a small flaw.

The Desert Patrol set was released in a flurry of Joe activity.  Starting in 2002 and continuing through 2004, Hasbro flooded the second half of the year with heavy releases.  They would release two figure waves in the first six months of the year and then bombard the market with three or four additional waves, exclusives and vehicles in the 3rd and 4th quarters of the year.  This made sense from a retail perspective since holiday purchases drove toy sales and Joe, at the time, was geared towards kids and their parents.  For collectors, though, this left some choices.  In the final months of 2004, collectors had not only retail two pack army builders that were released, but a TRU exclusive VAMP set with three vintage style figures, the KB Toys exclusive Operation Crimson Sabotage, but also a TRU exclusive Ninja Strike set that brought about the long awaited return of the 1984 Stormshadow mold.  In short, if you had a limited budget, the Desert Patrol set was the most likely candidate to skip.

And skip the set many collectors did.  The allure of army building cheap Crimson Guard, Hiss Tank and Red Ninja armies was simply too much.  Many collectors pinned their hopes that the Desert Patrol sets would be sitting around well into 2005 and they could acquire them at their leisure.  But, that didn't really happen.  While 2004 saw a slowdown in Joe sales overall with the Venom Vs. Valor theme, the product moved very well over the Christmas holidays.  As 2005 dawned, most of the Desert Patrol sets were sold out at Toys R Us stores and many collectors were left either without the set or scrambling to find a trading partner who had a spare they'd give up for army builders.  This left the sets as rather sparse items on the secondary market.  And, the Snake Eyes figure and this Stalker quickly began to command premium pricing, even as the other figures in the set were mostly worthless.

Stalker himself, though, is well worth the hype.  The figure uses the 1992 Duke body with the 1989 Stalker head.  It's a combo that works wonders.  The 1992 Duke body is excellently made.  But, the details of it were heavily lost in the tan and gold combo.  On Stalker, the raised details are painted in a darker brown/grey color that heavily offset against the light tan base.  The pistol is a nice black that showcases it on the figure's chest.  The grenades are painted in silver and green to also bring out the details that were always present but not always highlighted on earlier uses of the mold.  The cammo pattern is intricate and well done.  The 1992 Duke arms used to have super short sleeves that really kind of ruined him.  Stalker abandons that theme and has bare arms with these odd silver rings around them.  They are somewhat bizarre.  But, far superior to the super short sleeves from 1992.  Stalker also features a yellow tattoo on his right arm.  It's somewhat disconcerting and the figure would be better without it.  Especially when you consider that tight paint applications like that tattoo probably cost more to make than an additional weapon or backpack per figure.  I'd have much rather foregone the tattoo and gotten more accessories.

The Toys R Us sets featured terrible accessory choices.  Of the sets, only Python Patrol and the Anti Venom set really featured any of the figures' original gear.  The remaining sets contained a hodge-podge of common weapons that Hasbro used with many other figures.  The Desert Patrol set is among the worst gear offenders.  It contains no backpacks, no weapons originally included with the figures and a few weapons that were mostly released with Cobras of the time.  Other sets at least included a ton of superfluous gear.  So, while the weapons weren't great, there were a lot of them.  The Desert Patrol just included a handful of weapons.  This Stalker only includes one rifle.  It is a remake of the 1992 Shockwave rifle.  So, it is an excellent weapon and it looks great with this figure.  It's rare that a figure including just one rifle would have the best gear from an entire set.  But, that's the case with this Stalker.  Fortunately, it was easy to get spare black backpacks at the time that could be given to the figure.  Many found other weapons for the top figures in this set.  But, I appreciate the rifle that was included and use it as Stalker's only weapon to this day.

The legacy of the Toys R Us figure sets is complicated.  Looking back, there were more misses than hits.  But, when Hasbro did get it right, they really produced a great figure.  This Stalker, to me, is the highlight of the repaint era.  There are few figures who can stand up to his combination of different parts, paint applications and quality.  (Most who do are also convention releases...with a higher bar.)  But, this figure doesn't look like the 1992 Duke, even though they share the same base color.  The amazing paint applications help distinguish this figure from his predecessors.  And, it shows that just slight changes to a parts and excellent paint could make for amazing figures.  Sadly, though, Hasbro didn't do this often enough.  So, figures like this Stalker are the exception rather than the norm for the 2000's era Joes.

Desert Patrol Stalkers are somewhat tough to find.  The set only saw production of around 16,000 units.  Dealers will routinely sell mint and complete figures in the $13-$18 range just due to lack of other options.  But, left to his own devices, you can still get the figures for around $5.  You may have to wait for several months, though.  In my opinion, though, the figure is worth the higher price.  It's an excellent version of Stalker.  But, it's just a great figure in general and may be the best desert figure Hasbro ever made.  I'm very glad I picked him up and have him to this day.  The rest of the set isn't that important.  But, this Stalker is one of the highlights of the 1997-2010 repaint timeframe. 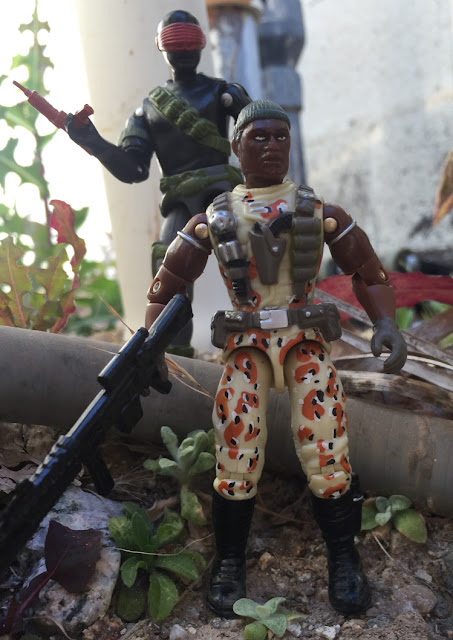 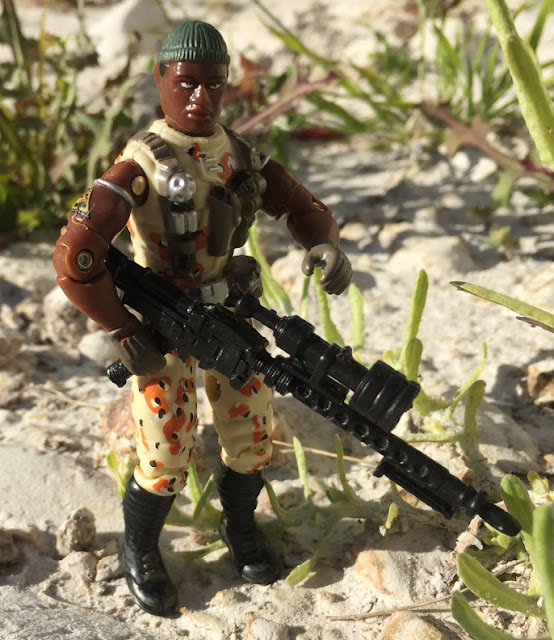 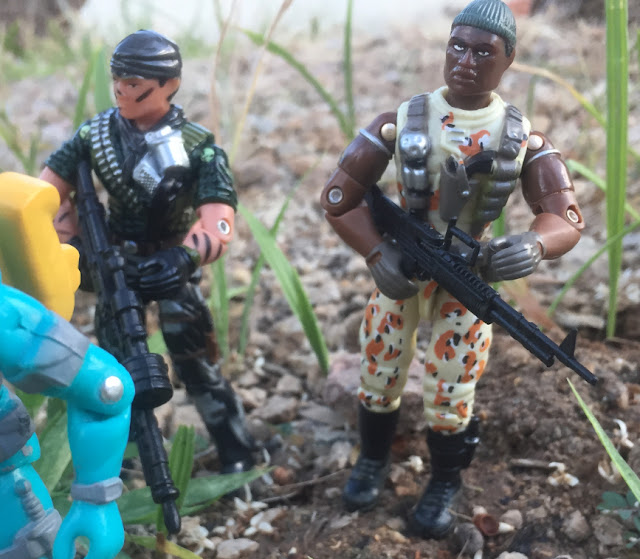 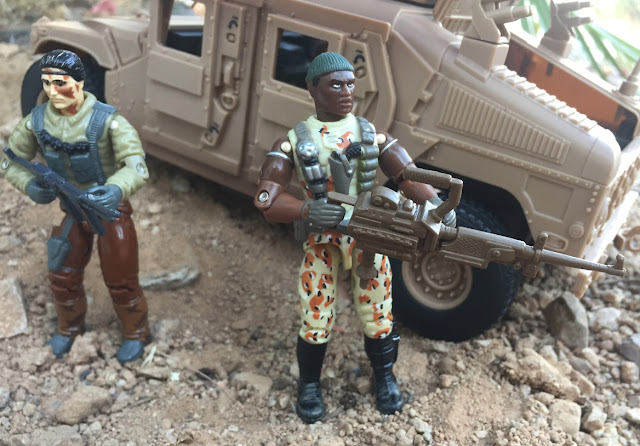 Posted by Robot_Sonic at 1:10 AM
Email ThisBlogThis!Share to TwitterShare to FacebookShare to Pinterest
Labels: 2004, Desert Patrol, Retailer Exclusive, Stalker