Many collectors like to pretend that G.I. Joe is about realistic military operations.  It's not.  G.I. Joe is just a comic book with super heros and super villains that happens to be set in a military unit.  From the beginning, Joe contained sci-fi elements and was far more than the traditional green army men who were cheap, WWII homages that kids got as gifts at the grocery store.  Joe dipped heavily into science fiction from the beginning.  And, that only continued through the rest of the line's run.  Right smack in the middle of it all sits the Persuader.  It's a tank with laser cannons.  But, G.I. Joe is realistic military!  Just look at the olive drab!  But, that was the genius of Joe.  It combined traditional military with science fiction fantasy and wrapped it around a group of super villains.
That aside, though, the Persuader is a toy that has some limitations.  But, it's still a lot of fun.  The Persuader gets a pass from me because of its release date.  1987 was my final year playing with Joe toys as a kid.  So, the new releases from that year got both special attention since they were new, but also retained their relevance since they were the final memories that were packed away.  The Persuader filled the role of utility vehicle.  At the time, Havocs were the Joe's heavy weapons that were most effective against Cobra.  But, they had limitations such as non-swiveling weapons and their tracks made them slower than the ultra fast Cobra STUNS.  So, the Persuader was the answer.  It was lighter and quicker than Havocs.  And, the turret could track and destroy the fleet STUNs.
The Persuader, though, had other value.  I saw a mine sweeper on the front of the tank.  So, the Persuader often lead any Joe convoy to sniff out any explosive booby traps Cobra might have buried on the road.  The Persuader's driver (always Backstop!) was also relatively protected as exposed vehicle drivers go.  So, taking the point made a lot of sense.  The missiles were rarely used and tended to be more for battlefield disruption and chaos than any actual targeted destruction.  It was the cannon that did in most STUNs.  And, the smaller cannon above the driver was effective against Dreadnok Trikes that made up the remainder of my Cobra mechanized cavalry.

As 1987 progressed, though, I found limitations in the Persuader.  The heavier cannons made it less effective against Cobra infantry.  Even the smaller cannon didn't really make sense for this purpose.  I found myself wanting something with different weapons.  I drew up pictures of a Persuader inspired tank that, instead of large lasers, featured heavy machine guns on the turret.  The design was intended for anti infantry use.  And, after I had that vision in my head, the real Persuader seemed a disappointment.  But, before the Persuader could disappear from my collection, my youthful days of playing with Joe ended.  At the end of 1987, I packed all my toys away and never played with them in any meaningful way again.
As a design piece, the Persuader is a substantial step below the similar price point vehicles from prior years.  First off, the cannon on the turret is bigger than the cannon on the Mauler.  It seems silly for this to be the case.  And, that poor proportion throws off the entire tank.  Beyond that, though, the Persuader is plain.  Earlier vehicles always included little things like removable panels, superfluous accessories or super details that make them jump to life.  The Persuader lacks all those things.  In 1983 and 1985, Hasbro made vehicles that included tow ropes.  For the Persuader, the tow rope is a molded detail on the tank's body.  Little things like this make the Persuader feel cheap.  It lacks the panache of earlier vehicles and definitely seems a bit out of place among its peers.
The Persuader pictured below is mine from my childhood.  I've never upgraded the toy as I've never had reason to.  This one sat in my parents' attic for years.  But, survived relatively well.  The only real issue is the broken tow hook.  I still remember the incident that lead to this damage.  I had attached the Road Toad to the Persuader's hook.  I had a few figures and was going to take the whole setup to a different room.  As I didn't have enough hands, I picked up the Persuader and found that the tension on the Road Toad's hitch was enough to hold it in place.  So, I held the Persuader with the Road Toad locked onto the tow hook.  As I walked, the hook snapped, the Road Toad fell to the floor and my Persuader was permanently damaged.  Oddly, I wasn't too broken up over it.  Usually, such breakage on a Joe vehicle doomed that toy to the bottom of our toy box.  But, the Persuader hung around after that trauma and continued to serve in the final convoy adventure that my friends and I had before I packed up my Joes permanently and didn't really play with them again.

The Persuader was reissued as part of the Night Force subset.  The black body seems cool.  The orange accouterments certainly diminish it a bit.  There are some international releases, too.  The most famous is the Plastirama release from Argentina.  This release isn't popular due to any significant variation.  It was just widely available in the early 2000's when large quantities of Plastirama overstock were imported to the U.S.  Through 2002, it was easier and cheaper to buy a MIB Plastirama Persuader than it was to buy a mint and complete with Backstop Hasbro Persuader.  The market has ironed out those inefficiencies in the past 17 years, though.  There's really no reason for the vehicle to return.  It's fun enough.  But, the coloring of the original is fine and the mold's limitations are with the giant cannons, not the palette.
You can mint and complete Persuaders for about $20.  Many of those will even include a mint and complete Backstop.  In this era of dumb Joe pricing, the Persuader remains the rare bargain.  But, that's heavily a testament to the vehicle's lack of popularity and overabundant release year.  The Persuader isn't a great G.I. Joe toy.  But, for the price, it is good enough to serve a purpose.  Talented customizers can do a lot with the vehicle and they remain cheap enough to cut one up and see what can happen.  It's good that there's still a few affordable G.I. Joe toys.  And, of them, the Persuader is probably one of the best of those that remain. 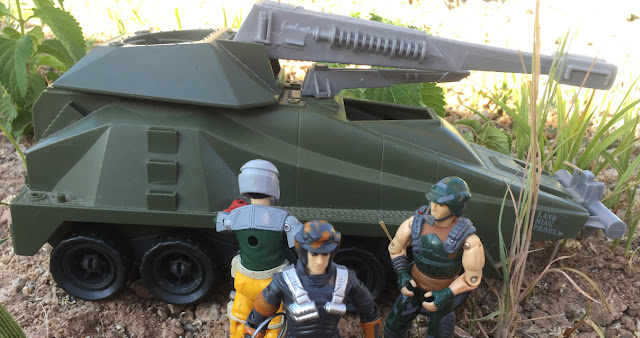 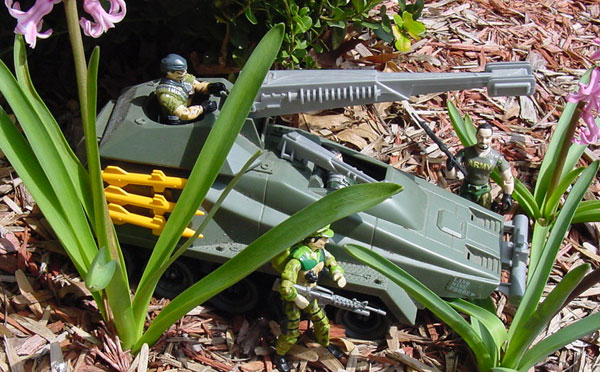 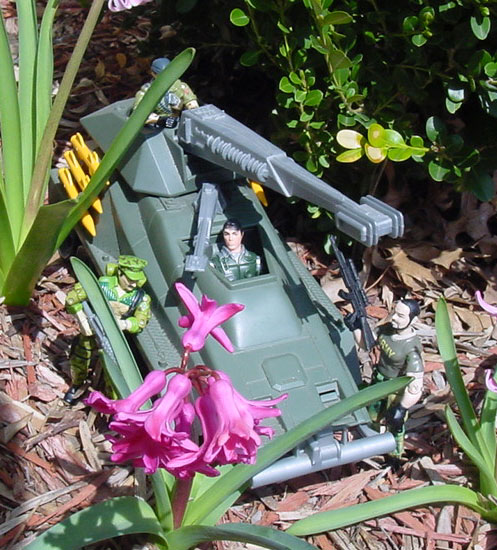 Posted by Robot_Sonic at 1:55 AM
Email ThisBlogThis!Share to TwitterShare to FacebookShare to Pinterest
Labels: 1987, Backstop, Persuader, Vehicles