Hasbro started repainting figures right away in 1983.  Grand Slam, Grunt and the Cobra Trooper all got the repaint treatment.  But, in those cases, the figure used was the same as the original release.  In 1984, Hasbro scupted a new head for the Hooded Cobra Commander figure.  In 1985, though, Hasbro released a new Snake Eyes...marking the first time that an existing character got an entirely new look at retail.  This continued in 1986 when a new Roadblock debuted.  From the small pictures on the back of cards, this Roadblock looked like a great update.  He was big and strong and carried his trademark heavy machine gun.  But, then, I found the figure at retail.  Quickly, all excitement for Roadblock drained away and I pawned him off on one of my brothers so that the figure still came home, but I was able to get someone much better.

The reason for this sudden deflation was that this Roadblock just isn't all that visually exciting.  He features heavy use of light grey, white, green and red.  In short, it's a combo that's tough to love.  He has super short sleeves that were meant to show off his massive arms.  But, they make the figure look silly.  The tactical vest that the figure is supposed to be wearing really didn't translate well into the finished figure.  While this Roadblock has more girth to coincide with his massive physique, the whole package just seems off.  It's not a look befitting a machine gunner and it's definitely a downgrade from his 1984 look.  And, when you compare this figure to Rock and Roll's 1989 upgrade, it's night and day.

As such, this Roadblock got little use during my childhood.  The 1984 figure, even with broken accessories, managed to stay more relevant.  The fact that the 1986 weapons didn't work with the 1984 figure, though, was just another nail in the 1986 figure's coffin.  My only real memory of this Roadblock is with a cheap molded plastic military dump truck that we had.  The thing was big and could hold a lot of figures.  So, it got use.  As it had no weapons, though, its play value was limited.  So, I punched a hole in the top of the dump bed that went over the drivers and put Roadblock's machine gun in this new slot.  Here, it helped keep Cobra at bay while the Joes unloaded troops or gear to the battlefield.  But, even in this instance, it was rarely Roadblock who manned this weapon.  It would have been used by the team in the truck and Roadblock was almost never among them.

The colors on Roadblock are interesting.  Prior to his release, these colors were pretty much unknown to the Joe line.  But, Attica Gazette pointed out an interesting connection between Roadblock and the 1986 Cross Country figure.  Basically, they use the same color scheme.  The greens are the same.  They feature heavily on greys.  And, both figures feature black and red highlights.  It's odd that two figures from the same year are so similar in appearance.  Maybe Hasbro just needed to use up the green plastic they ordered.  Or, maybe the color scheme tested well among the focus groups.  However, the similarity in their color schemes can not be coincidence and was surely a conscious choice by the design team.

Overall, my opinion of this figure is heavily influenced by my childhood feelings about the release.  The disappointment from 1986 still colors my views of this Roadblock even 35 years later.   Many other collectors, though, love this look for Roadblock.  It is bigger and more formidable than the 1984 figure.  And, that's something that many collectors really enjoy.  As such, you saw this look for Roadblock return in the anniversary figure series in the late 2000's.  And, it has reared its head again in the 2020 Classified series.  It's definitely an iconic look for Roadblock.  The fact that I don't really like it puts me squarely in the minority of collectors.  But, my tastes in figures have always skewed somewhat against the grain.

Roadblock just included two pieces of gear.  For 1986, this light assortment was not unusual.  Eight carded figures released this year include two or less accessories.  For many figures, though, the smaller allotment was fine as the gear was excellent.  For Roadblock, though, the gear was lackluster.  This time around, Roadblock got a taller tripod that allowed for better posing with the figure.  His machine gun is large and bulky...in line with the character.  While the detailing on the weapon is solid, the accessory is still overly large and doesn't look all that good.  The weapon has a bipod sculpted, but it doesn't work.  Seeing as how working bipods were long established in the Joe line, it seems like an oversight.  Roadblock was among the first Joe figures to include silver accessories but this isn't enough to really make them stand out.  After the excellent set of gear that was included with the 1984 Roadblock, the 1986 complement just seemd weak.  There are people who love the gear.  But, as a kid in 1986, I was disappointed as I didn't feel the weapons lived up to the Roadblock character.

The 1986 Roadblock didn't get a ton of use...in a way.  In other ways, it did.  Hasbro released this Roadblock in 1986 and 1987.  In Japan, Takara repackaged 1984 Hasbro Roadblocks onto cards that used the 1986 Roadblock artwork...a weird juxtaposition.  The mold then disappeared until 1997.  That year, the body was used (with a 1986 Hawk head) for Rock and Roll.  That release isn't a great figure.  But, it was also the last time that Roadblock's chest was used.  Hasbro repurposed the 1984 Roadblock mold in 2001, 2002 and 2004.  They then switched to the 1992 Roadblock mold.  Despite the 1986 Roadblock's legs and waist becoming a staple of Comic Pack figures in 2004 and 2005, Hasbro never actually repainted the entire 1986 figure.  And, that's a shame.  Molds that had limitations the first time around really should have gotten a second chance.  This mold would have been amazing in the 2004 Night Force set or repainted to look like the 1984.  But, it was not to be.  And, this 1986 figure is the only coloring of this mold for Roadblock that's available.

The 2020 surge in G.I. Joe pricing (and collectible pricing in general) has affected this Roadblock.  You see massive amounts of mint and complete figures selling between $22 and $26.  But, this Roadblock is a super common figure.  And, his oversized accessories were rarely lost and are also overly easy to find.  A little patience will still yield you a mint and complete version of this figure for around $10.  That's still probably more than this Roadblock is worth.  But, it's a fair price in today's market for a classic release year version of one of the most popular characters in Joe history. 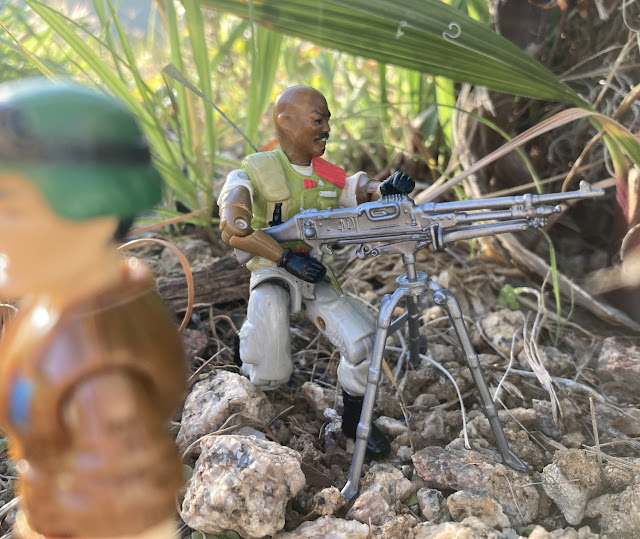 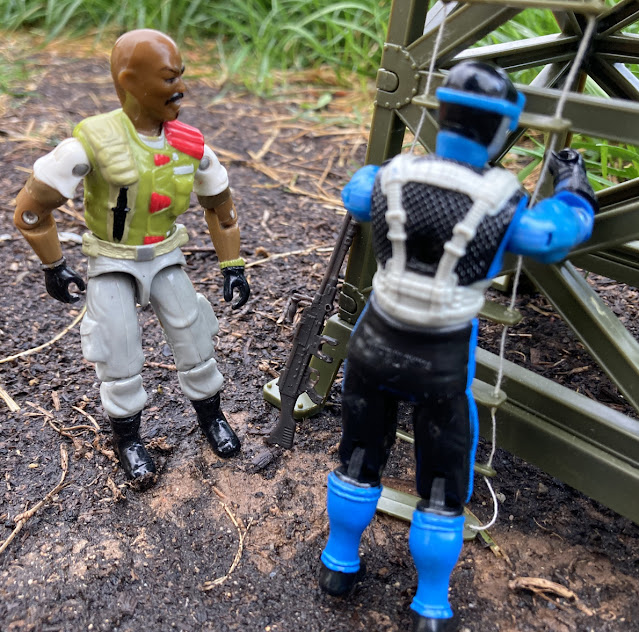 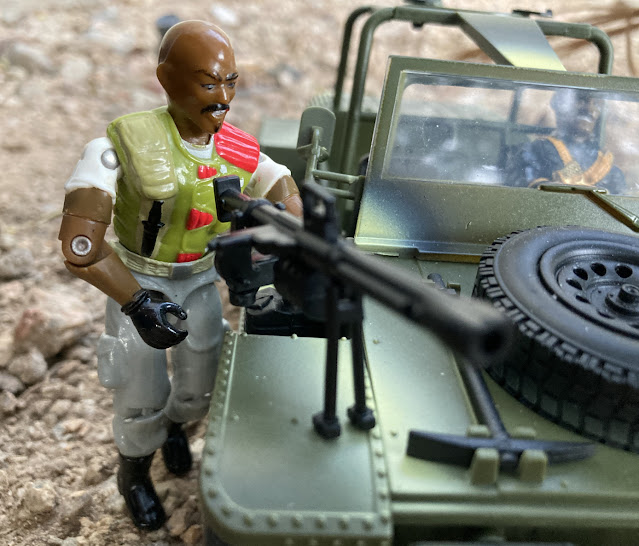 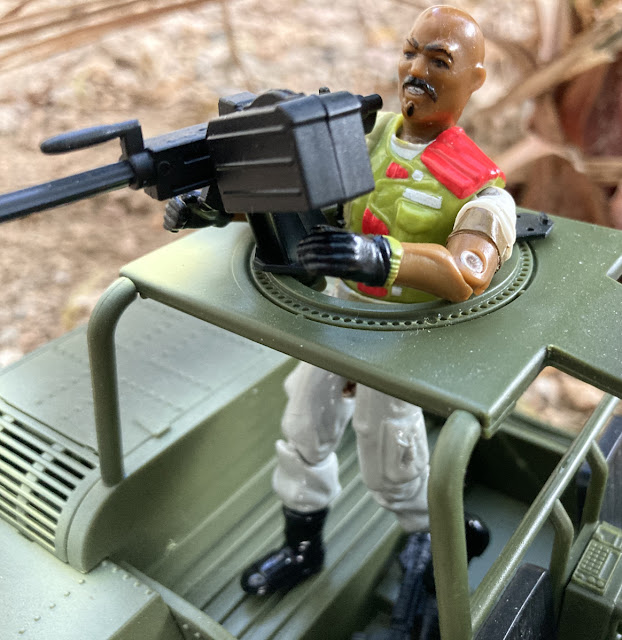 Posted by Robot_Sonic at 1:38 AM
Email ThisBlogThis!Share to TwitterShare to FacebookShare to Pinterest
Labels: 1986, Roadblock