1989 was probably the second best year for Cobras in the entire run of the G.I. Joe line. As such, many of the releases in 1990 tend to be overlooked. Since the awesome 89's were still on the shelves, many people didn't take much notice of the Cobras that welcomed the new decade. The S.A.W. Viper got a lot of time in the comic, but the Cobra who I think was the highlight of the year, the Range Viper, never seemed to get any coverage. This figure is awesome. I love the skull like head, the evil grin, the color scheme, and the accessories of this figure. He is the perfect Cobra trooper. He is equipped to the hilt with great weapons, he has a respectable color scheme and is molded with the ever popular bullet strap on his chest. He is perfect for all sorts of missions. I often use them as the more advanced field troops who come in when the Vipers have really made a mess of things. These guys work great in both rural and urban settings. They are the rare Cobra figure that really can be used in any situation.

The Range Viper anguishes in relative obscurity along with his '90 counterparts, the Laser Viper and the Rock Viper. All of these figures are very good, but they just couldn't keep up with the great class of '89. Unfortunately, 1991 followed with another great crop of Cobras. The Crimson Guard Immortal, Desert Scorpion, Incinerators, Snow Serpent, Bat, and Cobra Commander simply overwhelmed the 1990's again. The figures never had the chance to appear on the shelves as the pre-eminent Cobras. As they were overshadowed at retail, they have been largely overlooked in the collector market as well. This, though, gives many collectors a chance to get ahold of these guys. While Alley Vipers and Crimson Guard Immortals continue to climb the price charts, the Range Viper has remained affordable. The Range Viper is probably the most readily available well sculpted Cobra that can still be purchased for a good price.

The Range Viper has been one of Hasbro's favorite Cobra molds since they relaunched the line. The figure was repainted in his entirety as the 2001 Rock Viper. The mold was then dusted off again in 2002 for the Skullbuster figure. Parts of the mold then appeared in 2005 as the Processional Viper and most recently, a desert Range Viper was released by the collector's club. But, remember, that figure isn't an army builder.... Regardless, it has been one of Hasbro's favorite molds and characters. Still, even with that, I think that a Range Viper done up in real wilderness colors is still one of the figures that needs to be done. After that, the mold can be retired. But, it really makes no sense to never see a Cobra Wilderness Trooper in colors that would befit his specialty.

Range Vipers can be found rather easily and rather cheaply. Unlike the pricey '89's and '91's, the '90 Cobras are still cheap and plentiful enough to build armies. They make excellent additions to any Cobra legions. Their weapons are great, and they don't have the neon colors that seem to plague so many figures made in the '90's. These are the consummate Cobra field troops. Not until the '98 Viper pack did Cobra get a generic field trooper that could measure up to the Range Viper. (Don't get me wrong, I think the original Viper is awesome, but his red uniform would not work too well in the field.) I don't know why the collector market has passed on these guys. To my knowledge, they never appeared in the comic. I don't know about the cartoon. Like Miniver Cheevy, the Range Viper was born too late, or too early. Either way, he came out at the wrong time to be able to capture the Joe fans' attention. This is fortunate, though, as the Range Viper gives new collectors a chance to build a Cobra army with cool figures that won't break the collecting budget. 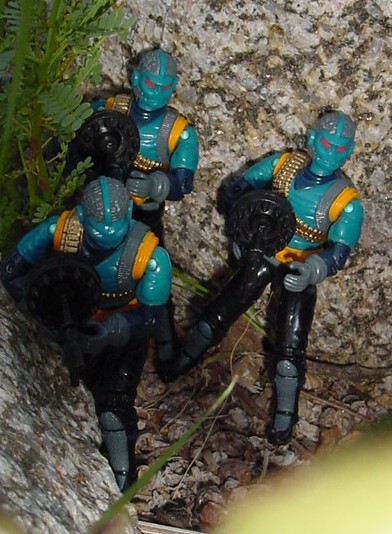 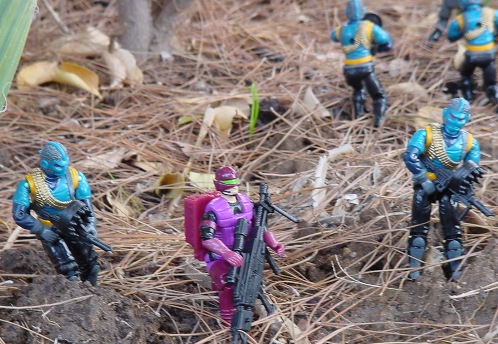 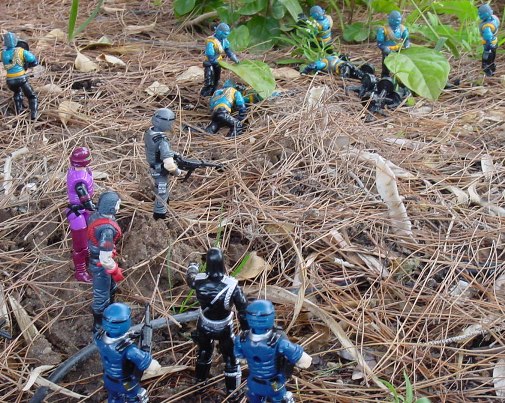 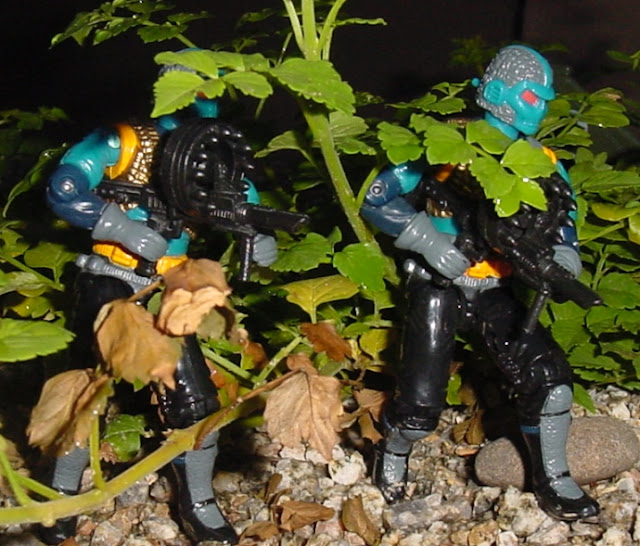 Posted by Robot_Sonic at 10:52 AM
Email ThisBlogThis!Share to TwitterShare to FacebookShare to Pinterest
Labels: 1990, Range Viper