Lamprey is one of my old favorites. The Hydrofoil is my favorite Cobra vehicle of all time. It ranks third to only the Hovercraft and the Tomahawk on my all time favorite vehicles list. Part of what made the Hydrofoil so cool was the pilot. Lamprey was an awesome figure, with a cool gun, and a great color scheme. He was the perfect fit for what was, at the time, the largest Cobra vehicle ever attempted.

The minute I opened my hydrofoil, the Lamprey was almost too cool to use. I took extra special care of him since I knew that I would never be able to get another one without buying another hydrofoil. (This was before Hasbro Direct started offering vehicle drivers through mail-in offers.) He was one of about 7 or 8 figures I always hid from my little brother. He liked the Lamprey and really liked Lamprey's gun. If my Lamprey was ever missing, I could always find it in my brother's room. I managed to keep him well hidden, though, and my original Lamprey is in excellent shape. My brother did manage to lose his gun for a while, but I found it about two years ago in a box of forgotten Lego's that appeared in our attic. I was lucky enough to get a couple of these guys in early 1999 from Hasbro Canada as part of the find up there. Unfortunately, when I tried to order about a dozen more a few weeks later, they were sold out. At least now, though, I have enough to fully man a hydrofoil. I've also managed to pick up the bagged sample you see here. He is the mail in version of Lamprey. He's got the red backed file card that is indicative of Hasbro Direct. On the file card page, you will see another bagged sample from Hasbro Canada that does not have the file card included.

The 1985 Cobras are considered by many collectors to be the best year of Cobra figures ever released. While most people like the old blue troops, with the additions of the Tele Viper, Crimson Guard, Snow Serpent, and the Eel, Cobra became a legitimate enemy to G.I. Joe. Lamprey just extended the already great '85 line. Unfortunately, he is often overlooked in most conversations about the '85's. Looking at this figure, he is not just cast in cool colors. His mold even looks good when it's grossly exaggerated like the Super Sonic Fighters version was. The sleek helmet and tight life preserved make the figure look realistic without sacrificing any of the figure's overall look. It's a shame this guy wasn't used more in the comic. I've always made him a special guard to Cobra Commander or other high ranking officials since he is just too neat to only use in the hydrofoil. His gun also usually finds its way into some of my custom terrorists' hands.

Since the Lamprey was available as a mail-in for several years, he isn't too tough to find. Many people had the original hydrofoil, and many more purchased the mail-ins to get this figure. He often appears in big lots, and can usually be picked up still in the bag like the one you see here. You don't often hear many collectors clamouring for more Lampreys, but since they are readily available, most people can get their fill without breaking the bank. Personally, the Lamprey is one of those figures that everyone says, "Oh, yeah. He's really cool.", but never brings him up in conversations about their favorite figures. Like many of the figures that were only available as vehicle drivers, Lamprey is kind of forgotten by the collecting community. It is unfortunate, but it keeps this figure from reaching catastrophic price points like the other '85 Cobras.

Of interesting note about this figure, his legs were going to be reused on the 1995 Battle Corps Rangers Flint . This figure has great parts, but they weren't used on too many other figures. It also proves that Hasbro had the mold around until at least late 1994. It's just too bad we didn't get a Moray remake with a new Lamprey in either the 1997 or 1998 re releases. 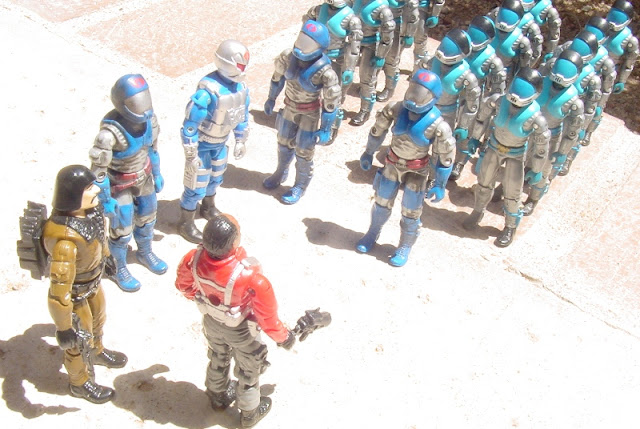 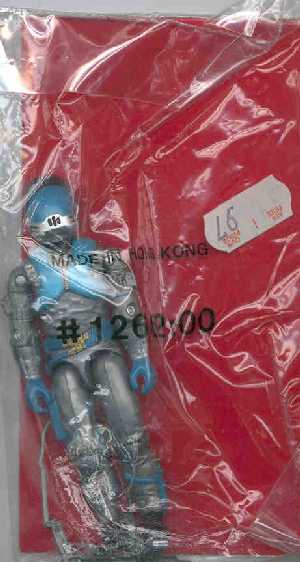 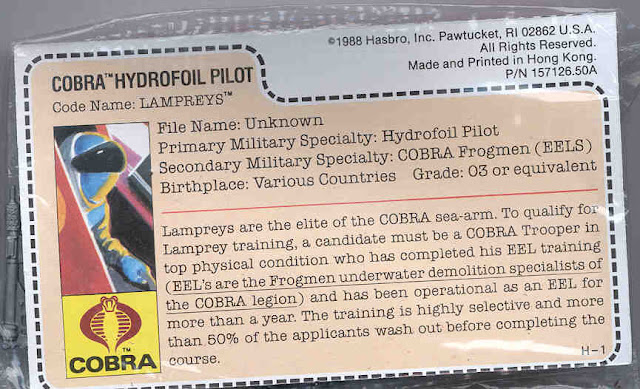 Posted by Robot_Sonic at 4:00 AM
Email ThisBlogThis!Share to TwitterShare to FacebookShare to Pinterest
Labels: 1985, Lamprey, Vehicle Drivers