I will admit that one of the most basic premises of this figure is ludicrous. Whoever thought that a head mounted missile launcher was a good idea, well, I can't really finish that sentence as no hyperbole would be accurate enough to describe the stupidity. The figures planned for the 1993 D.E.F. line are among the worst in the entire collection. They seem like they were just thrown together at the last minute to put as many figures on the market as possible. By my best count, there were 64 new carded figures released in 1993. (Not counting the Street Fighter or Armor Tech figures.) This was far and away the most prolific year in the line. I think Hasbro knew the line was ending and they were desperate to get as much product out as they could. G.I. Joe was also suffering through an identity crisis. They had made so many special interest groups that the whole "team" concept was lost. I think they started to find their focus in 1994, and would have really wowed us in 1995 had the line survived. Instead of what could have been, though, we are left with figures like Mace.

I actually like Mace. I have found a good use for him as a prison guard. His helmet works on him. (He looks atrocious with it off. Kind of like the 1984 Duke on steroids.) His black vest with the communications device are actually pretty cool. He has a shoulder holster that also adds to his usefulness. Had this figure been conceptualized in the late '80's, I think he would have been among the most popular of his year and would even rival Shockwave in overall collector popularity. Unfortunately, he fell victim to Hasbro's 1990's philosophy: short on realism, long on neon. The sculpt is good, the colors are okay, the head is awful. As I said, though, a diorama with two or three of them set up as guards looks pretty good. If you have some black weapons laying around, it's amazing how much of a difference they make in a figure. Mace makes for perfect custom fodder as he is basically cast in black with yellow highlights. His uniform is very minimalist and subtle. After looking at him for a while, you just have to find some use for him.

The Mace mold has been around a bit. After his release in the US, the mold went down to Brazil. There, the figure was released in colors similar, yet slightly superior to the American figure as a character named Cerebro. (That figure also included yellow version of Bullet Proof's gun.) After that, the mold mysteriously reappeared in the US as part of the comic pack Clutch figure in 2004. It was then used again on Steeler a few months later. It is not known if this mold is the original from Brazil or if Hasbro had two of the molds available for Mace and just dusted off the second version. Either way, this is a figure who could, potentially, return at some point. With the right coloring, I think he could be a welcome addition to the modern line.

Mace is one of those figures from the end of the line that is both easy and difficult to find. He was among the most frequently found figures at discount stores well into 1996. I managed to find all three of my originals at retail that year. As such, Mace is usually available carded. Since most people disdain this figure, though, he is rarely found by himself. Mostly dealers cleaned out the discount stores where the 1993 Battle Corps figures were dumped so these figures ended up in boxes, far from the collector's eye for several years. Now, Mace's are readily available. You may just have to also pick up a version of Long Arm and Gristle with him. Mace's also seem to be finding their way into many lots. Since these figures were available at many discount stores, I think many kids also have them. Since these figures sucked, though, they seemed to have survived junior's play years rather well. Most Maces you find are mint and have at least the helmet. Like most the later figures from the line, I think Mace's availability will only increase in the near future. As such, he is a good figure to pick up for cheap. If you don't have any carded figures, you can usually get a Mace for under $3 or $4. It may not be much, but if you're just starting, this can be a fun figure. 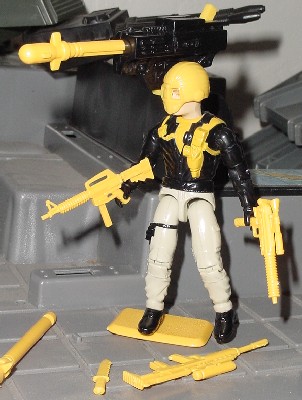