As most people hold the 1994 G.I. Joe releases in disdain, you never see much about this figure. However, I think this guy is one of the best figures that was ever created in the line. The 1994 Shipwreck was excellent for many reasons. He could be used underwater, on ships, or as an attacking commando who would raid enemy maritime installations. I have heard many collectors deride this figure. I will admit that this figure is certainly not the character of Shipwreck that so many collectors enjoy. I think this figure is best put to use as a nameless, faceless trooper. An army of them is absolutely awesome. Since the face mask covers the head, this figure could be any Joe who is put to use in a special mission. In fact, this figure always reminds me of G.I. Joe Special Missions #1. I only wish this figure had been available in the '80's.

As with most of the 1994 releases, you never hear about this figure. Since the comic and the cartoon were both cancelled at this point, Shipwreck never got the chance to appear in this uniform. Many people had abandoned the line, and those left didn't like this bastardization of one of their favorite characters. This has left this figure as a great unheralded gem at the end of the line. I was happy to see the mold redone in the 1998 Navy Seal pack. My great lament, though, was that they didn't give him the weapons of the original figure. Shipwreck was one of the few 1994's who actually came with black weapons. It was these that helped make the figure. I have always thought that the gun that originally came with Hit and Run to be the best of the line. I was very happy that Hasbro reincarnated it so many times in the '90's. This figure is just awesome.

While he does suffer from the "big shoulder" syndrome of the later figures, this figure is still one of the best molds of the last three years of the line. His best feature, is that the figure is all self contained. The mask plugs into the body rather than a pack. This is a feature they didn't use enough in the line. The few figures that have it, though, are all very cool figures to play with. The color scheme on this guy is great as well. He is perfect for a diver, and night landing missions. I loved the color of the Mission to Brazil Wet Suit and this figure carries that tradition. He just looks realistic to me. (Note that I am not a military scholar by any means, so this figure could be totally off. I still like him.)

This Shipwreck mold has now been resurrected twice by Hasbro. It first reappeared in the 1998 Navy Seal Team pack in basic and aqua blue. It then showed up again in the highly desired Wave V of the A Real American Hero Collection. That figure was done in colors very similar to this version: only a little lighter. Unfortunately, both of these figures pegwarmed a bit upon their release. It seems that despite the high quality mold, collectors simply aren't interested in this figure to the extent that I am. I'm not too disappointed, though, as the figure has been released in 2 great color schemes and one really good one. That's more than can be said for many other molds. So, if we never see this mold again, I don't think that's a terrible thing.
Shipwreck, like most of the '94's, is easily found carded, but appears less often loose. Many times he is found without his mask, but sans that accessory, the figure is useless. (Fortunately, the Navy Seal pack can still be found at TRU's throughout the country and the mask from that pack is compatible.) I feel that most of the loose '94's, though, are still about a year or two away from appearing on the second hand market. Once this happens, I expect to find Shipwrecks popping up all over the place. This was a very cool figure, and would be one of the '94's that kids would have wanted. As these youngsters become teenagers, need money, and discover Ebay, these figures will begin to appear all too often. (Kind of like the Eco Warriors figs do now!) Naturally, I will welcome that day as this figure is one of the few Joes that makes an excellent army builder. Hopefully, by the time I have the space for a Flagg, I'll have enough of these figures to help man it. 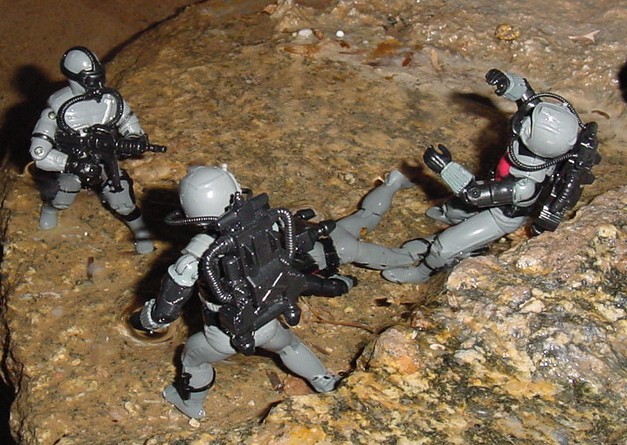 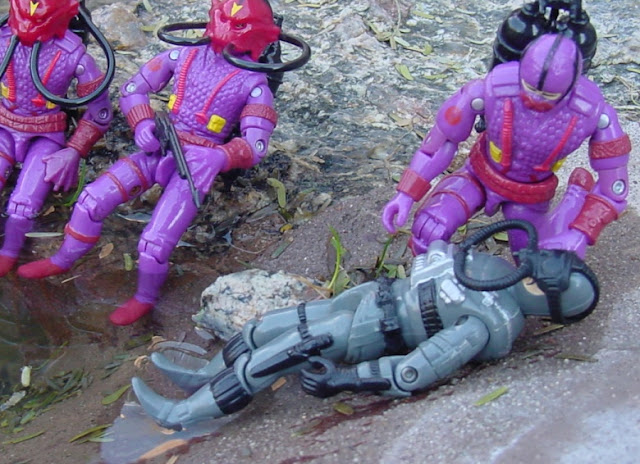 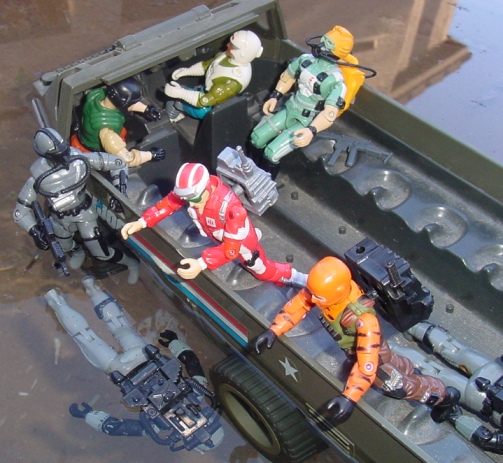 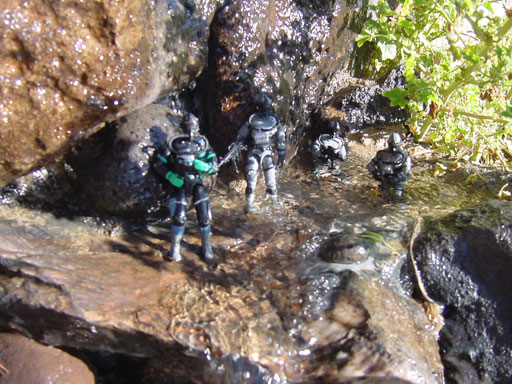