Many of you may have seen this figure on Yojoe.com. listed as an unnamed prototype. This is the exact same figure you see there. (They get a lot more hits than I will, and I believe figures like this should be shared with as broad a segment of the collecting community as possible.) I believe it is a prototype of the Battle Ranger Flint that was scheduled for release in 1995.

From the looks of this figure, 1995 would have been a great year for military figures. Personally, I think the '94 figures had their moments and were pretty cool. The '94 Shipwreck is one of my more used figures. 1995, though, seems as if it would have given collectors a chance to focus on military toys without having to deal with all the Star Brigade that was also planned for that year. Much of the conception art from the Battle Rangers that has survived shows that Hasbro was returning to the good old days. I don't know how many figures would have been in the Battle Rangers line. In fact, this figure is the only 1995 prototype I have seen, except for the infamous 1995 Baroness, that was not from the Star Brigade series. If they were serious about a return to traditional military, Hasbro really screwed up in not releasing these figures. The detail is great, and they seemed to be going back to some popular older molds to help overcome what could be perceived as lack of creativity. Had it not been for Hasbro and Kenner's marriage, and the desire to reintroduce Star Wars figures, we might still be seeing new Joes every year. While I like Star Wars, that was certainly not enough to kill G.I. Joe. (Of course, I doubt I would have 40 Stormtroopers had there also been Joes available to compete for my toy dollar.)

You will notice that this figure has great detail. I can only imagine what kind of paint scheme he would have had. It looks like he is wearing a life preserver. In actuality, I like to think it was a flak vest, or something else cool like that. You will notice, though, that the vest could also be exaggerated by Hasbro's insistence on making the '94 and later figures with higher shoulders and broader chests. I think it was their last ditch attempt to "buff up" the figures to be more in line with other contemporary toy releases. After this trick failed, they went on to Sgt. Savage and the awful G.I. Joe Extreme. The existing Battle Rangers art that depicts Flint shows him drab gray and green. This color scheme actually looks very cool and would have made an excellent figure. Of important note about this figure is that his legs are from the 1985 Lamprey. Other prototypes didn't have the legs if they were reusing old molds. Why this one does, though, is a mystery. It would make sense that Hasbro would reuse old molds since that was their practice during the final years of the line. I just found it odd that this figure is complete while other prototypes only exist with their newly molded parts. It does, though, tell you how close we were to getting a 1995 line.

Recent discussions with others who own prototypes of 1995 figures has yielded some interesting new observations. It appears, that Hasbro may or may not have been toying with the idea of taking the waist articulation away from Joes. Many of you have seen the concept figure at YoJoe.com that is a block figure in basic Star Wars construction. It has poseable arms, legs, and head, but the waist is one solid piece and does not move. Other people who have prototypes from the Battle Rangers line have reported that while their figures have the same O-ring construction as the rest of the line, the waists are fused together to not allow movement. That is not the case with this figure. He has full waist articulation. The question is, what were Hasbro's plans regarding waist articulation? Were they planning to do away with it? If so, why would they keep the basic O-ring construction the same but take the extra step to fuse the pieces together? Could it also be that other prototypes were from earlier stages of development and had not had the articulation added in yet? It could also be that since this figure utilizes legs from an already existing figure that he would have kept the waist articulation while the other, completely new mold figures would have not had any. Of course, this would have created an incredible inconsistency in the line, but, in the mid '90's, Hasbro wasn't too keen on attention to detail. Whatever the explanation, all the '95' prototypes are a fascinating look into what Joe would have become had Star Wars not been reborn.

There has been a recent (July-August 2000) rash of 1995 prototypes appearing for sale on the second hand market. At least 2 more versions of this figure have appeared, as well as a few new figures. One of those new figures is making the rounds as Flint. Does that mean that this figure is not the intended Battle Rangers Flint? Well, I still don't think so. I appears that the Battle Rangers line was going to be articulated in the same manner as the rest of the line. I also appears that there was going to be another subset where the waist articulation was going to be changed. This new Flint has the different waist articulation. Hasbro had released the same character in different outfits and different subsets before, so it is not all that strange that Flint would have appeared in both the Battle Rangers subset and another subset at the same time. This differently articulated subset, which, by all indications, would have at least included this aforementioned Flint, a new Stormshadow, and a new version of Duke appeared to have been more sci fi in nature. While the figure you see here is fairly tame and realistic, these figures are more similar to the Mega Marines and 1993 Battle Corps lines. It certainly would have been interesting to see what type of subset these guys would have been put into, but, alas, it is not to be.

(8/24/00) Thanks to heads up reader Ben for pointing out to me that the Flint and Stormshadow prototypes that surfaced are from the doomed Ninja Commandos line. You can read all about the Ninja Commandos, as well as check out painted prototypes and see mocked up card art at YoJoe.com.

This also brings up another point. A prototype of the 1995 Battle Rangers Footloose has also recently surfaced. This figure only had newly molded chest pieces and head. It follows the pattern of the figure you see here. If the Battle Rangers were to be the only 1995 subset that included classic articulation, it would make sense that they would utilize existing molds as a cost cutting move. Of important note, though, is that the Footloose prototype closely matches the Battle Rangers conception art that can be seen at Yojoe.com. While this figure was not sold to me with a name, it does closely match the character on that concept art that has been identified as the Battle Rangers Flint. It is possible that the character was simply called Flint in publicity literature as it is an identifiable name However, Footloose was hardly a popular Joe. It doesn't make sense that one new Joe would have been renamed for publicity paraphernalia and the Footloose figure would not have been renamed to Duke. (Duke was a much more recognizable name and was also supposed to be included in the Battle Rangers line. I have never seen any prototypes for him, but the recent discovery of the Footloose and the additional versions of this figure would seem to indicate that he must be out there somewhere.) It is for these reasons that I still am a firm believer that this figure is the intended 1995 Battle Rangers Flint.
***Updated 12/14/03***

As it has been over 4 years since I first showcased this figure, a lot has changed and a little has changed. The Joe world is a bit different than it was then as just about every figure known from the '95 assortment has appeared for sale a few more times. (I've added the Dr. Mindbender to my collection.) My guess is that there are probably less than 12 of these figures out there. The number might be smaller than that, but it is an educated guess. Surprisingly, though, collector interest in pieces like this remains low. While people will pay over $1,000 for a production level unproduced figure (even when there is no documentation from Hasbro to support the figure's authenticity) they don't seem too terribly interested in these unproduced resin prototypes. That's nice, though, as, if you can find them, these pieces (which I consider a greater part of Joe history than anything produced since) don't command the price tags you are accustomed to seeing for production level unproduced figures.

The real question that begs to be answered, though, is: where are these 1995 molds? While these resin pieces don't seem to indicate that the molds were ready for production level figures, they do show that they aren't that far off. As we've gotten the Manimals with the re-releases, it would make sense that, if these molds still existed, we would have seen at least a couple of them make it into production. As we have not, I am lead to believe that these molds are not available to Hasbro. They could simply not be finished and deemed not worth investing in when usable molds are abundant. They could be lost in a warehouse with their documentation separated so the molds can not be used. Or, they could be sitting in India. Whatever the case, I would like to know. I think that the '95 Battle Rangers figures are worth digging up, even if only two or three of them ever see production. Hopefully, the future will hold more information about these figures.

As with other existing prototypes I have seen, we, the collectors, were really short changed by Hasbro never releasing these figures. The '95 line promised great detail and cool figures for both the military purist and people like myself who really liked the Star Brigade figures. I can only imagine what else the Battle Rangers line would have offered, but if this figure is indicative, '95 could have been one of those years that collectors really cherish. 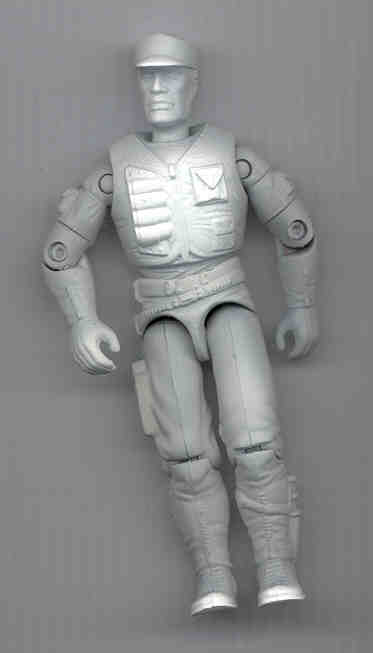