Lately, a lot has been made of Gears, the Version 2 Techno Viper, and the Power Fighters in general in the Joe newsgroup. People have been arguing over their scarcity, value, and just general coolness. Before all this erupted, I was planning to profile Gears. I have just recently acquired one, after almost a year's search, and feel that he should be my Star Brigade entry for this batch of 20 figures. Now that all this hulabaloo has come around, though, I feel that my timing may be misplaced. However, timing is everything and I feel that Gears should be showcased while the little attention he receives is still in full swing.

When I first saw the Gears figure, I thought he was pretty cool. I had yet to acquire either the '92 or '93 version of Barricade and thought that Gears would make an excellent pilot in my collection. After an unsuccessful but short stint trying to find one, I finally got a '92 Barricade. The mold had such limitations that I abandoned my search for Gears for a year or so. Late last year, I finally got close to completing my '94 Star Brigade collection. (I still need a loose Predacon and Lobotomaxx, though. If you've got one, I'll trade you something very nice for them.) As I neared the completion of that goal, I remembered Gears and the Version II Techno Viper. I started searching for Gears almost immediately. Nearly a year later, I finally found a loose specimen. I bought him and quickly tossed him into the '94 drawer. I highly doubt he will ever emerge.

I like Star Brigade for what it was in 1993 and 1994. The Lunartix aliens started to get a bit out there for me, but I could accept them since they were cool figures and had Joe articulation. The Manimals would have been too much. Frankly, I'll buy one of each of the new Manimals and leave it at that. They won't be opened or anything. I just don't see the need for them. They are part of Joe, but not one of which I think I would have been particularly fond. I hold the Power Fighters in the same regard. They are neat toys, but not the direction I think Joe should have gone. Had the Manimals been broken off to another, separate, line, the Power Fighters would have made perfect sense. With the release of the new Manimals only a couple of months away, I hope they are released just for collectors and Hasbro doesn't decide to take the fledgling line in that direction. It would be too much and probably kill any chances for success that the Joe comeback has.

Okay, let's cut to the chase. Gears is tough to find. In fact, he and the version 2 Techno Viper are definitely among the 25 rarest American Joes. While this is the case, that does not mean he is expensive or valuable. Boxed Power Fighters routinely sell for under $30. I bought this loose Gears for under $8. People don't like him. His mold is overused and not that cool to begin with. His color scheme is highly suspect. Also, he is Star Brigade. All of these factors doom him to an eternity of collecting purgatory. Since he isn't common, he will always be worth more than many other '93 and '94 figures. Still, he will be worth considerably less than any figure who has any type of fan following. Gears is an oddity. At that level, he works. Taken as anything more than that, this figure is pretty awful. That being said, you can determine his value to you on your own. To me, he was a figure that I wanted. I like Star Brigade and wanted a complete set. That is really the only reason I was after him. Unless you are a completist, I don't see much need for this figure. Even as hard to find figures go, he is very mundane. Still, he deserves some shrine to his existence. If the recent discourse and this profile are all he gets, well, I think he's gotten more than his due.

I don't need any more Gears, but would like a Version II Techno Viper. If you can help, drop me a line. 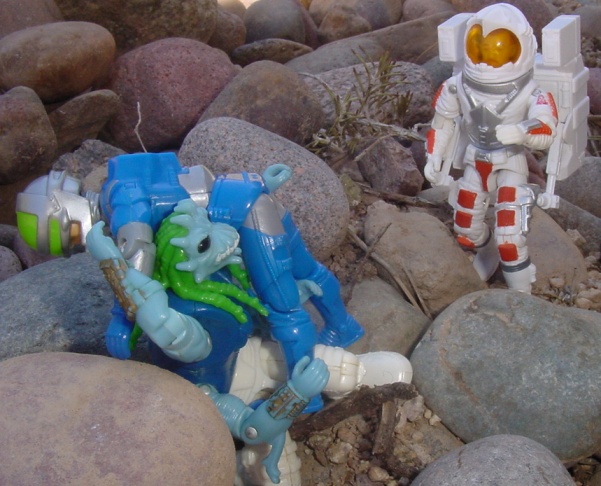