I've made my feelings about the original Viper known in his profile. While many consider him to be the consummate Cobra soldier, I look much later in the line, to the '98 Cobra Trooper for a figure fitting of that moniker. It is the '98 version that ties the newer, more modern look of the classic Viper to the traditional colors of the Cobra army. He includes accessories that make him look like the grunt that he is. This version perfectly blends into any army of early Cobra figures and is a great, modern update to the original Cobra Trooper.

This figure is just about perfect. He combines the nostalgic look of the old blue Cobras, like the Viper Pilot, with the more modern approach that was utilized in later figures. He is fully outfitted with tons of great accessories, and was available in a pack with 2 of him and one of the equally excellent grey Cobra Trooper Commanders. For the first time in any toy line of which I'm aware, Hasbro finally got it right. They put together an easily available army building pack that came with two awesome troopers, one "leader", and all the proper accessories to make them all usable right out of the package. (Of course, the Vipers were shortpacked in the cases of '98's. As such, they were the toughest '98's to find, but I, and no one else who looked for them, really had any problems building nice armies.) Why Hasbro doesn't utilize this approach to other lines, like Star Wars, really baffles me. I know a three pack that even contained one Stormtrooper, one Sandtrooper, and one Snowtrooper would fly off the shelves. It would be an easy way to build armies without driving yourself nuts trying to beat out the scalpers. The fact that the '98 Joes were highly driven by fan interests, though, may explain why we got this awesome pack. Hopefully, Hasbro will get it together and remember this success with the 2000 line. I would probably buy 10-20 2 packs of Cobra troops but, I know that I'll probably limit my purchases of the new Rock Vipers to under 6 since I also get a Major Bludd figure. Not packing troopers together shows a remarkable lack of understanding about the both the collector and kid toy market. We want bad guys and lots of them! Are you listening, Hasbro!?!

Now, back to the task at hand. When I first found these guys, I quickly used them as my primary Cobra troops. I only had one Range Viper and one Alley Viper at my disposal. As such, I wanted a cool figure of whom I had three or four to be my primary Cobra baddies. These guys quickly filled the role. When they disappeared from shelves in early '99, I was afraid that I hadn't bought enough. Fortunately, new shipments appeared at Christmas in '99 and I stocked up with enough '98 Cobras to keep me satisfied, for a short while, anyways. These guys just work great. They integrate with any generation of Cobra troops. They also look great in dioramas and dio-stories. If you check around the web, you will find many people who use these guys for those purposes. In all instances, these guys look good. They are a versatile figure that is remarkably cool.

This figure does have one "detriment". He does not have a Cobra logo painted anywhere on him. Like one look at this guy doesn't identify him as a Cobra! Still, it was enough for some people to raise holy hell. Of course, these are many of the same people who bitch about every little nit picky detail on any figure. Personally, these guys are the only Cobra troopers in my collection. They get used on every mission. They are a figure that shows a well thought out repaint can create a fabulous result.

This version of the Viper actually uses the mold from the 1997 figure rather than the full vintage version. As such, he has the legs and the waist from the BAT rather than the original Viper. (This was due to the fact that the original Viper legs and waist were split from the rest of the mold when they were shipped to Brazil as part of the 1993 Dr. Mindbender mold. This new hybrid of Viper became the defacto version for many years and saw release in 1997, 1998, 4 different times in 2002 and 3 different times in 2003. Hasbro finally remolded the upper thighs and waist from the original Viper in 2006 as part of the Viper Pit set. At this point, the various Viper molds have been used in a full rainbow of colors. Yet, there are still some glaring omissions in the Viper pantheon. I would greatly enjoy both a desert Viper and an arctic Viper should Hasbro ever return to the mold. But, I don't need any more blue or red versions at this point.

Cobra Troopers aren't all that tough to find. Of course, that doesn't mean they are cheap. These guys are easily fetching $10.00 or more for loose specimens and carded 3 packs can go over $50!. What must be remembered, though, is that these guys came out a time when many childhood collectors were of an age where they had not only the idea to build armies, but the financial wherewithal to back up that desire. I've got 6 opened 3 packs of Cobra Troopers and another 3 still carded. I left several more sitting on the shelves since I felt that I had enough. You can be sure that there are people out there with substantially larger armies of '98 Cobras than I. In fact, check out Cobra Command Online. Be sure to stop by his Cobra rally diorama. You will quickly get the point that these figures are not rare: just very cool and highly desirable. That being said, in a few years, I see these guys being among the most expensive Cobra troops. Right now the nostalgia factor keeps many of the '80's figures high in price. When memories of these guys sitting on retail shelves fades away, you can be sure they will quickly climb the price charts. Now may be the best time to add them to your collection. Unfortunately, only two years ago, it was much easier to do so.

I like these guys, but have 12 of them. Still, if you've got some from which you wish to part, email me. 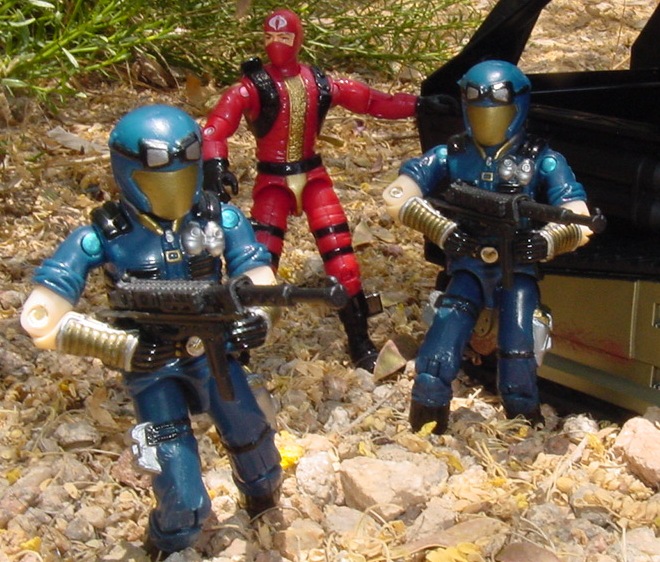 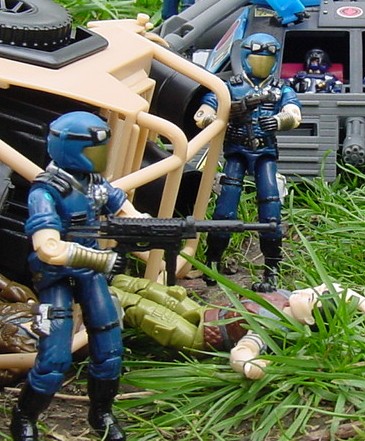 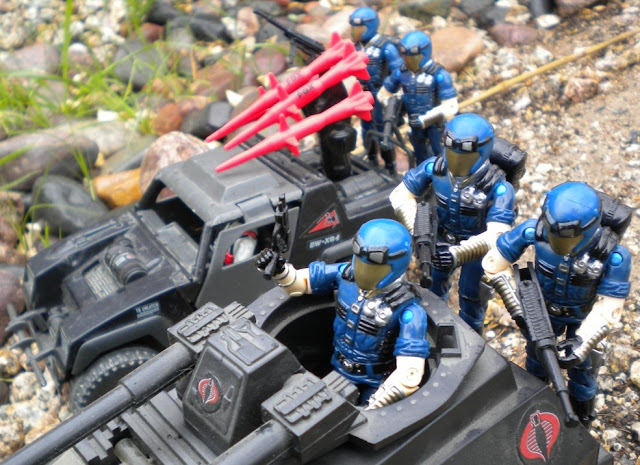 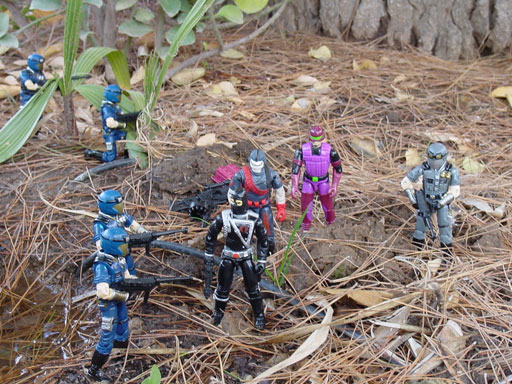