I've already talked about the Iron Grenadiers subset's lack of respect when I profiled figures like the Annihilator. The figure who derives its name from the subset, though, is another excellent example of a great mold improperly marketed. Had this guy been a Cobra, I think he would be as popular as any of the '89 Cobras that came out the next year. As he is relegated to a subset, though, he is another forgotten gem that came out during Joe's peak popularity. How a figure like this slips though the modern collecting community is beyond me....

In my collection, the Iron Grenadier has always been a poor man's Cobra trooper. I mean that in the respect that he was always used as a Cobra only because all my original blue Cobras had bitten the dust. The look of the figure harked back to the days of the old blues. I used them as updated Cobra cannon fodder. As time progressed, though, I found better uses for this figure. At first, he was the backbone to an urban invasion squad. As my Alley Viper army grew, though, his need for this capacity dwindled. His next foray, and the one he still occupies today, is as a guard and specialty trooper. I have 8 of these guys surrounding the 1988 Destro. They stand juxtaposed to Cobra Commander and his minions. Surrounding Destro, these guys look great. The black and gold, as well as the menacing way with which they are capable of holding their weapons just makes for a great display.

The best thing about the Iron Grenadiers is his accessories. The Uzi is an excellent weapon that looks awesome. It has only one flaw: the handle is huge and will break many figures' thumbs if it is shared. The little red pistol is about as bad as accessories go, but it easily ignored. What really makes this figure stand out is the sword. He doesn't carry it because he's a ninja or martial artist. The sword is for decoration that hearkens these troops back to the Scottish warriors of old. This little feature is what makes this guy perfect for guard duty. It's also what separates him from many other figures in the line. While Joe really pushed the limits of modern technology, they did offer us a throwback figure every so often. I consider Budo to be one. This guy is another and is a perfect example of how a stupid gimmick can really give a figure identity.

I really don't see the Iron Grenadiers as a separate faction from Cobra. Instead, I see them as part of Cobra, but they are specially trained by Destro to serve under him exclusively. They are not Destro's troops, per se, and still answer to Cobra. But, they serve Destro almost exclusively and are used for his ends. However, I also see them as a specialized unit. They are small in number. (Maybe under a couple of hundred.) But they are capable of pulling off missions that are beyond the scope of stand Cobra Troops. Usually, they operate in urban environments and their missions tend to be well planned and better executed. They are sort of like a Cobra SWAT unit, but they work mostly with Destro and serve his desires most often.

The Iron Grenadier mold was used by Hasbro in 1988 and 1989. After that, it was sent down to Brazil where the mold was released in nearly identical colors as the American figure as Terrork. From there, the mold has disappeared. In 2005, Master Collector recast the Iron Grenadier head for use in that year's convention set. But, the full figure seems to be missing. This is somewhat odd as some of the Iron Grenadier's Brazilian contemporaries are safely back in Hasbro's control. (Astro Viper and 88 Destro). However, some other figures from that same time have not reappeared. So, the whereabouts of the full Iron Grenadier mold is undetermined. If it showed up at some point in the future, it would not surprise me in the slightest. However, I won't hold my breath for this to happen.

Iron Grenadiers are rather easy to find. He came out at a time when Joes were still being pumped out by the millions. Even mint and complete, this guy isn't too tough. In fact, he is one of the easiest enemy figures with which to build armies. Since he isn't, technically, a Cobra, many people don't hold this guy in the same esteem as many of the other villain figures that were available around the same time as the Iron Grenadier. This is, though, a very good thing. The Iron Grenadier is one of the few very cool figures that can be had for under $8.00. As this is the case, I suggest building your armies now. The Iron Grenadier is a figure who's turn will come. While Cobras have climbed the price charts, Destro's minions have been left behind. As many Cobras are no longer economically feasible with which to build armies for the average collector, many people will turn to Iron Grenadiers and their ilk as more than ample substitutes. When that happens, you can expect the ready well of Iron Grenadiers to run dry.

I need a couple of Iron Grenadier Uzis. I would also take a took at any extra figures you might have. If you've got a few with which you are willing to part, email me. 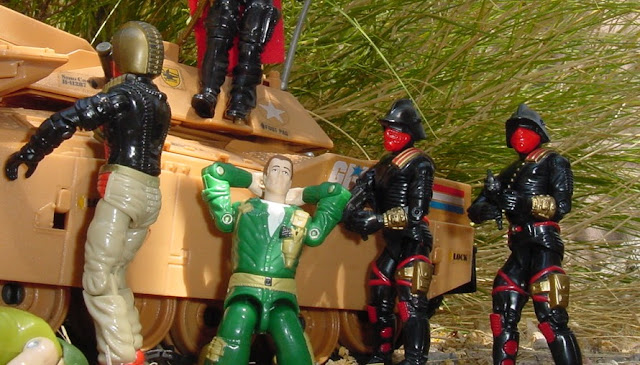 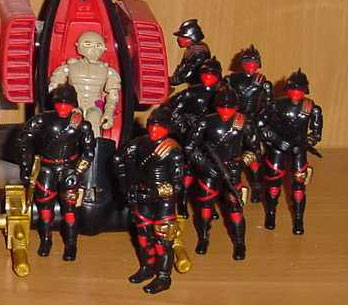 Posted by Robot_Sonic at 2:25 PM
Email ThisBlogThis!Share to TwitterShare to FacebookShare to Pinterest
Labels: 1988, Iron Grenadier