G.I. Joe was an interesting line from a mail in offer perspective. While they rarely offered really great, original figures by mail, Hasbro Direct did keep just about every figure and many vehicles available for years after their retail cancellations. As such, there are very few figures in the Joe line who were not available via mail order. By the same token, there were very few mail order figures who were only available via that avenue. Of those who were, most were repaints of existing molds with maybe one or two newly molded parts. Others were celebrity spokespeople whose inclusion in the line is a discussion best left to another time. The final group of mail in only figures was what I call the "gimmick" group. These guys all had a selling point that would make them attractive via mail order whereas it would have doomed them at retail. I count the 1988 Super Trooper in this category.

As I have said many, many times before, by 1988, I was pretty much out of Joe collecting. Still, though, I did poke my head into the toy aisle every now and then. My brothers were still of Joe collecting age and I still collected the comic. (Funny how collecting comics and sports cards was okay, but collecting toys was not.) As such, I was still privy to the happenings in the Joe world. When I was much younger, I had always eagerly anticipated the mail in figures that were offered by Kenner for their Star Wars line. While this had built up expectations for mail order greatness, Hasbro had killed those expectations off with their relatively mundane mail in offers. I had diligently ordered them all, though, from the original straight armed Cobra Commander, though I didn't get the "Mickey Mouse" version, all the way through Sgt. Slaughter. When the Fridge was offered in 1987, though, I drew the line. I just couldn't, in good conscience, order that figure. When I saw the offering for 1988, though, I was even less impressed than I had been with the Fridge. Super Trooper was just too far gone for my tastes. An invincible trooper who wears all metalized silver armor? Come on! Naturally, Super Trooper was passed by and was not added to my collection.

That all changed last Saturday when I finally added this guy. I picked him and a straight arm Breaker at the last minute in a lot on Ebay. I had never really searched for the Super Trooper, but jumped at the chance to pick up two figures I needed for a fairly small price. I just figured Super Trooper would disappear into the 1988 drawer forever and would never emerge. When I got the package, though, I was enthralled by this figure. He was really cool. Of course, I still don't think I will ever have a use for him in my collection, but he is nice to look at and looks very good displayed out in the open. As such, I was pleasantly surprised by a figure that I thought I would always hate. The metal looks very good when its juxtaposed to the dark and light greens that make up the rest of this guy's uniform. The visual effect is very different from what I anticipated.

On Sunday, the day after this guy arrived, I was cleaning out an old shoe box full of G.I. Joe paperwork. Among the blueprints, flag points, and booklets, I found the mail in coupon you had to send in to get Super Trooper. Unlike the lame Fridge and Sgt. Slaughter inserts, though, the Super Trooper advertisement came with a short comic strip that introduced the character. It is, as far as I know, the only time Super Trooper appears in any element of Joedom besides the figure itself. I know he wasn't in the comic and I don't think he was in the cartoon. As a special bonus that will cause this page to load incredibly slow, I've included scans of both sides of that mini comic so you can see just how special Super Trooper was supposed to be. The comic is a chilling reminder of what Joe could have become had the toy powers had full control over their figures' characterizations.

Super Troopers are both easy and hard to find. If you aren't looking for this guy and just randomly acquire large lots of figures, Super Trooper rarely appears. He just isn't a figure you see in large collections that are offered for sale. If you are looking for him, though, he often appears by himself and is mint and complete. As such, you can usually get yourself a Super Trooper for under $10.00. He's one of those figures that just doesn't inspire a tremendous search for many collectors. He is very cool to look at, but cheesy to use. As such, I don't foresee this guy ever reaching the heights of popularity enjoyed by the Steel Brigade figure or Starduster. They are at least fun to use. This guy is just sharp and eye catching. Still, he is a fun addition to any collection. I've got mine standing on a shelf with many of my more obscure Joes. The metal stands out among the subtler colors of many of the other figures. In this capacity, he gets some use, but it is all he will probably ever receive. While a neat figure to look at, Super Trooper is just another forgotten member of the all too large Joe team ranks.

I'm not after any more Super Troopers, but would like another version or two of Starduster. If you can help, drop me a line. 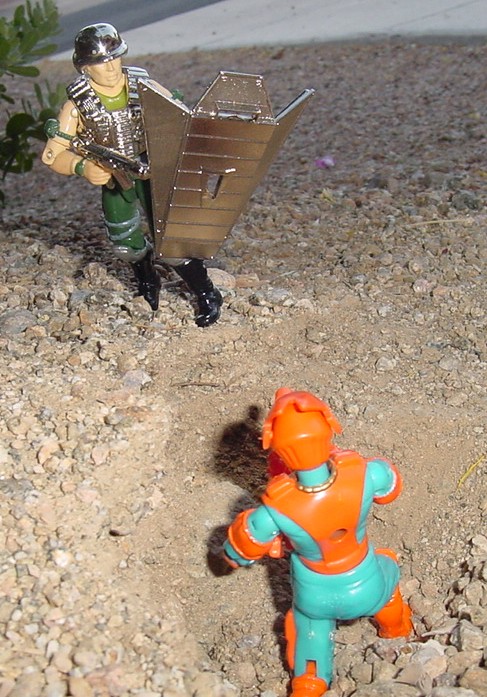 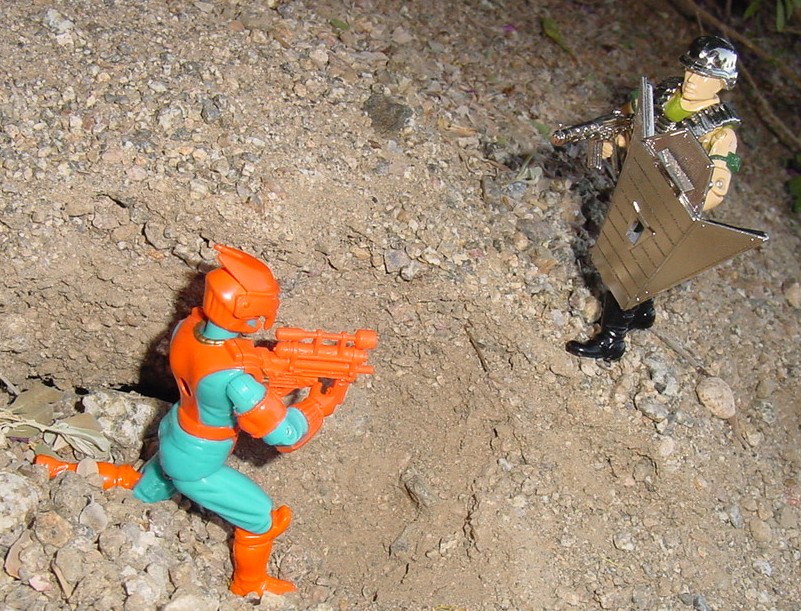 Posted by Robot_Sonic at 8:30 PM
Email ThisBlogThis!Share to TwitterShare to FacebookShare to Pinterest
Labels: 1988, Mail Away, Super Trooper