Back in January of 1983, I finally got the 2 mail away Cobra Commanders for which I had been waiting. They were both the straight armed version and were awesome. Snake Eyes was no longer the only enemy of my Joes. I used the Cobra Commanders as enemy elite troopers who were every bit the Joes' equals. As I discovered Cobra in 1983, though, the Commander's role changed. He became the character he was supposed to be and the one I have already twice profiled with the 1993 and 1994 versions. The only reason I am profiling this figure is because of the rarity of the logo that is on his chest.

Frankly, this is not an often seen figure. Most people know of the different logo, but pay little attention to it. For hard core collectors and completists, though, this alternate logo Cobra Commander is one of the most frustrating figures in the entire line to find. He just doesn't appear all that often, and when he does, often exhibits extensive play wear, like most straight armed Cobra Commanders do, from his original owners. This guy came out in 1982. Back then, no one kept their figures mint and on display. We played with them, and hard. That is why this figure remains such a "holy grail" in the collecting world. Very few people received this figure, but even fewer didn't play him to death. This is why I put little stock in modern variations. So many people keep figures MOC and mint in perfect storage, there is no way that you will have the majority of any one variation disappear over time. Back when I collected baseball cards, many dealers had a theory that most of the cards produced prior to 1976 had a one year half life. That meant that every year, the number of mint cards in existence was halved. Of course, this theory only applied for a limited time as certain items would reach peak rarity and then the vast majority would disappear into collections and remain forever mint.

I think a similar theory can apply to the early '80's Joes. I'm sure they had a one year half life throughout the '80's and even into the '90's. Now, though, I think there are more Joes being rescued than there are being destroyed. I do not, though, hold this theory to any Joe figure produced after 1989. I just feel that many of the original Joes were destroyed by their owners. Now, the figures that remain will stay fairly constant, but as the number of collectors increases, the early figures who were not mainly kept mint, complete and in the package, will become the more desirable and valuable specimens. For this reason, I think the "Mickey Mouse" Cobra Commander will remain one of the most sought after figures in all of Joedom.

There is one more thing of note on this particular figure. His crotch arrived to me unpainted. I don't have any specific reason for this. It could be a factory error, or some kind of oversight. It could be that this figure is a pre-production piece and should be classified as a prototype rather than the actual figure that made it to shelves. Whatever the reason, the crotch on this figure is exactly the same as the normal Cobra Commander. It is just unpainted. If you have any information about this figure, or any insight into why the crotch is unpainted while the rest of the figure is, please email me. I will give full credit to anyone who can help me solve this little mystery.

I'm not kidding when I say that this guy is among the rarest Joes ever made available in the U.S. In fact, check out T.N.T.'s Web Camp for their listing of the rarest Joes based upon collector input. This figure ranks #1 as the rarest U.S. figure and #19 overall among all Joes ever produced from all countries. As such, you can expect to pay through the nose for this guy. Loose, mint, complete specimens usually sell in the $75.00-$100.00 range. Any example still sealed in its original mailer bag would sell for substantially more. The thing about this figure, though, is that you can get very, very lucky. Many people who are not informed Joe collectors may not know of this variation. They may have it and not realize the gem in their collection.

There are many, many stories of collectors buying a straight armed Cobra Commander off of Ebay, or some similar place and being surprised when they receive the alternate logo version. This did not happen to me, but keep your eyes peeled. Only two days after I purchased this figure, there was a lot of 3 different Cobra Commanders on Ebay. Among these was this alternate logo version, though the logo was a bit scuffed. As there were no comments explaining what the figure really was, the lot went for under $30.00. The only reason I'm offering this is because it is still possible to get lucky. Personally, I just went for it and added this guy when I found one where I felt the price was fair. It is the second most I have ever paid for a figure, being outranked only by the Battle Ranger Flint, but is a cool variation and one of the few variations in the Joe line that actually occurred on a major character. Right now, I don't regret purchasing this figure, but ask me again in a couple of months. This guy now sits safely in my safe deposit box and his only use will be for this page. When I think of all the other Joes I could have bought with the money I spent on this guy, I wonder if he, or any figure that costs even half this much, is really worth it. I guess time will tell.

Now that I've got this guy, I don't need another. If you have any information, though, about why his crotch is unpainted, please email me. 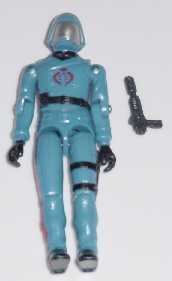