I've really got no reason to profile this figure. I've already touched upon the Snake Eyes character when I profiled the 1991 version. Why, then, am I wasting a profile on a character who has been done to death and a figure reuses one of the most famous molds in the entire history of the line? The answer is simple. I felt that I needed to examine the phenomena of the 1997 figures and their current state of affairs in the collecting world. Since I've already profiled the only 1997 figure that I consider to be of excellent quality when I did Stalker and Snake Eyes is the only other 1997 figure that I own that I also use, I felt it appropriate to profile him.

I've already stated that I was incredibly surprised when I found the Star and Stripes nearly three years ago, today. At the time, I mainly had Star Wars figures. I had just moved to Arizona and hadn't brought any of my original Joes out with me. Once I had the Star and Stripes set, though, I started looking for more Joe figures. By the end of 1998, I was back into Joe collecting full time. I haven't really looked back since then. (Although, this Christmas is shaping up to be a Star Wars Christmas. Apparently, I've got over 20 figures that I don't yet have coming to me. While I'm sure I'll get at least a couple of Joes, I think Star Wars will take this year's holiday season.) In those early days, though, my figure selection was limited. I've already said that I don't really use the Snake Eyes character. Because of that, this figure became a masked assassin. I gave him the original Mutt's silenced Mac-10 and made him the lone gunman who would assassinate prisoners or high ranking officers on both the Joe and Cobra side. When it's all you've got, you become incredibly resourceful.

As my collection has grown exponentially over the past two years, figures like Snake Eyes have been replaced. Now, this guy sees very little use. I just don't have the inclination to use him any more. I've got many other figures who are better suited to the type of role in which I had been using him. Every now and then, I pull him out for a quick strike against some poor, unsuspecting Cobra higher-up. Since I haven't had any real desire to use the original Joes in any capacity since the very early days of my youth, figures like Snake Eyes really don't hold any meaning for me. I think that's why I have yet to replace several of my straight armed figures. I had to make it one of my collecting goals to acquire some new straight arms this year. I just don't have any desire to add them to my collection. Perhaps, someday, I will wish I had taken better advantage of the current availability of many of the original Joes. Until then, though, I really don't care much for those early members of the line.

One of the reasons I like the Star and Stripes set, though, is because they took many of those old molds and gave them more elaborate color schemes. The result is the figures don't all blend together so much. It is a much nicer effect. Snake Eyes, for example, has a bit more subtle color to him. It makes all the difference in the world. What was a dark, bland figure is now much more realistic and likable. The same can be said for the other original molds they reused for the Stars and Stripes set. I think part of the reason why I'm not overly fond of the original Joes is that they are all the same. With these repaints, some of the figures have grow on me. For that reason, I think many of the '97's will be a nostalgic favorite, if nothing else.

The 1997 figures have become incredibly hard to find on the second hand market. I don't know why. In all of 1998, these guys were remarkable pegwarmers. Sure, the Commando team would sell out from time to time, but none of these packs were hard to find. In late '98, the '98 Joes hit the shelves. Almost overnight, all the '97's disappeared. You could find beat up Stars and Stripes sets lying in Toys R Us clearance bins from time to time, but the rest of the '97's were gone forever. As such, we are left with a relatively tough class of figures to find on today's second hand market. In late '97 and early '98, Star Wars scalping was still in full effect. Because of this, Joes fell to the wayside. The other factor that has lead to their relative scarcity is the fact that the figures suck. There are very few cool '97's and most people consider the construction and paint quality of this group so poor, that they really didn't pay much attention to them. While the '98's were full of army builders and good molds, the '97's were poor color choices of unpopular molded figures. This leaves the modern collector who missed out on them at retail in a real bind. All of the '97's are starting to get pricey, when you can find them, that is. As time goes on, I think that G.I. Joe's "Power of the Force" (scarce figures that come out at the end of the line and are produced in smaller quantities) will not be the 1994 series, but the 1997 series. Fortunately, there are no highly desirable figures in that mix. While it won't ease the financial stress these guys are starting to put on the modern collector, it does keep these guys from being that one sore spot in your near finished collection. 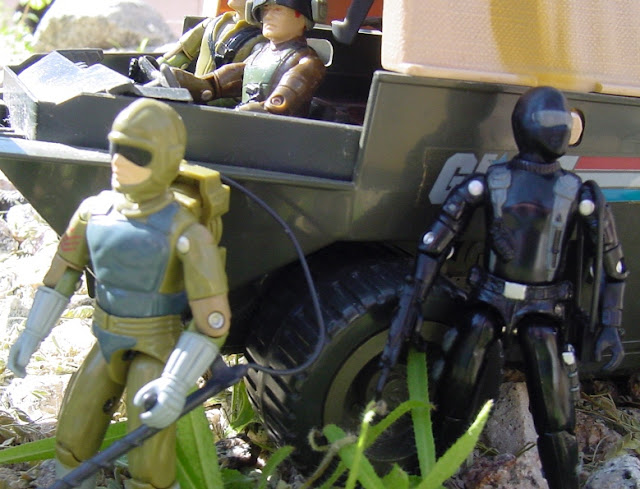 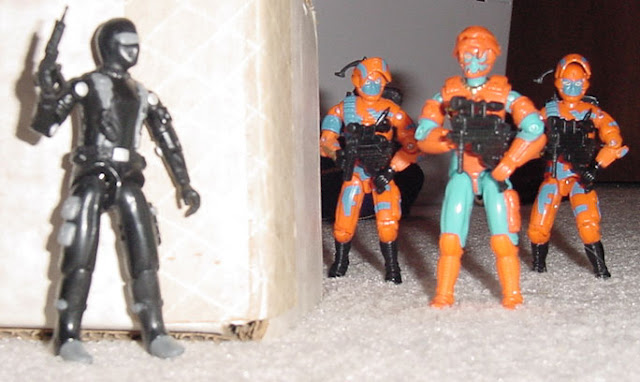