Buzzer, Ripper, Torch.  Tom, Dick and Harry.  Winken, Blinken and Nod.  Any way you look at it, the original three Dreadnoks can not really be discussed individually without also including them as a group.  They are just so tied together in character and even figure design that they really have to be discussed in both contexts.  As a group, they are one of the most famous sub-teams in the line's history.  Collectors continue to enjoy them today.  But, as individuals, the Dreadnoks run the gamut from a fully developed character like Buzzer to someone like Ripper who was little more than an illiterate thug.

The Ripper mold is exceptionally detailed for a 30 year old action figure.  The designers really approached the Joe line with a degree of professionalism, love and attention to detail that translated into the classic figures that are still being derived from today.  Ripper is no exception.  From the Mohawk to the teeth of his necklace, the entire mold shows a remarkable attention to detail.  Ripper has a bulk to him the other Dreadnoks are missing which helps provide some diversity in their physical builds.  It's not so much as to make the figure unusable with vehicles from the time.  But, it is a visual difference in the three figures.  The half shirt and sunglasses are a bit dated.  But, taken ironically, Ripper could be considered a hipster in the modern Joe line.

Ripper's accessories are nothing short of exceptional.  His gun has the basic body of the 1983 Snow Job rifle.  But, Hasbro added on a scope, clip and a monster cutting blade that took a basic weapon and made it something signature.  Once you get past that, the Jaws of Life are a great accessory for someone hell bent on destruction.  (I only wished they had actually opened when I was a kid!)  The plug from the jaws to the generator on Ripper's pack was just a wonderful plus.  But, the great play feature was that the jaws could be hung from the prongs on Ripper's pack.  Or, it had a small clip that allowed it to attach to the pack's frame.  The result is a self contained accessory set with magnificent detail that defines Ripper as a character.

I have told the story of find the Dreadnoks prior to Christmas of 1984 many times.  Of the three Dreadnoks, though, Ripper was the one who I never, technically, owned.  While I got Torch and Buzzer for my birthday and Christmas, Ripper was actually given to my younger brother.  Since the figure was not actually mine, I didn't have as much of a chance to develop the character to the extent that I did for the other two Dreadnoks.  Even as Ripper lost my brother's attention and was integrated into my use rotation, I always used him more as a one off character than anyone who was actually part of my overall Cobra hierarchy.  My only real memory of the figure is that in the early of months of 1985, I took all the Dreadnoks out in the snow to play.  As I was carrying the figures back into the house, Ripper's gun fell out of his hand and into the snow.  I could not find the silver weapon against the white backdrop.  A few weeks later, we had a warm day with heavy rain.  This melted off the snow and created a thick fog over my entire neighborhood.  Naturally, all the kids got together to play in the haze as it made our "war games" that much more fun.  As I ran across my front yard, I spotted a flash of silver and resurrected Ripper's gun from oblivion.  I stuffed it into my pocket and have, basically, the only specific memory of Ripper as a figure from my childhood.

While the Dreadnoks should be tethered to Zartan, I never really saw them as his minions.  While I may have used the 3 bikers in conjunction with the shape shifter for a few months after my initial acquisition, I quickly found the Dreadnoks being more of their own subgroup.  Mostly, this was due to issue #30 of the G.I. Joe Marvel comic where the Dreadnoks simply couldn't resist destroying Joe Skystrikers.  This lead me to use the Dreadnoks as more of a rogue group.  They would work for Cobra from time to time.  But, they would also attack the Joes out of general spite with no help from Zartan or the Cobra organization.  In time, though, this played itself out.  With the exception of Buzzer, the Dreadnoks simply didn't have the strength of character to remain prominent players in my collection.  By the end of 1985, they were mostly gone from my play rotation.

Ripper's jaws of life found more use, though, as I commandeered them for various rescue teams that would save Joes trapped in burning aircraft or the hull of Whale.  The silver color worked well with a variety of Joes.  The Ripper figure slowly became more of a generic bad guy who would often get killed as he undertook some nefarious, criminal endeavor.  He was not Ripper, per se, but a nameless criminal the Joes could kill or imprison without affecting the character.  Eventually, my main Ripper figure was taken apart and his legs and arms used for various custom figures in my collection.  I distinctly recall an accessory pack M-60 wielding heavy machine gunner using Buzzer's torso and lower body, Ripper's arm and Duke's head.  That was basically the end of Ripper in my collection until I reacquired one as a adult.

The Ripper mold has an interesting history.  After his use in the U.S., the mold was sent down to India.  In the mid 1990's, Funskool started producing the figure.  The most famous variant is the extremely rare purple Ripper figure that features a purple shirt and glasses.  This figure was then replaced with a version that is very similar to the American figure.  Funskool stopped producing Ripper prior to 2000.  As such, no version was readily available for many years.  In 2002, though, a major retailer in India commissioned Funskool to run another batch of Ripper figures.  Some American dealers were able to tack on to the overstock and brought a nice batch of Funskool Ripper figures to the U.S.

The reality, though, is that over the years that Funskool produced the Ripper figure, they made several major and minor variants.  Many of the more obscure Ripper figures that feature color differences were put into vehicles as bagged pack ins.  As such, there are probably 6 to 12 major Ripper variants out there for OCD collectors to track down.  In 2003, the Ripper mold was one of the first 18 molds that Funskool returned to Hasbro.  Master Collector quickly swooped in and released a version of Ripper in the 2004 Dreadnok Convention set.  This red and blue figure is something different for Ripper.  But, it's not, necessarily, an improvement upon the original.  In 2005, Hasbro released Ripper in a Dreadnok themed comic pack.  This figure featured a new head and colors similar to the original release.  While the figure gets points for including the original accessories, the reality is that the pack was a colossal flop that was clearanced for as low as $3 each.  The Ripper mold doesn't really lend itself to great repaints.  (Though, a black version to simulate biker leather might work.  But, it's likely the mold would appear more Village People and less Sons of Anarchy.)  But, collectors have quite a gamut of figures based on this original mold to track down.

Ripper was a popular figure released as part of a popular subset at the height of Joe's retail power.  As such, the figures exist in huge quantities and are rather easy to find.  However, Ripper features four points that make a mint figure problematic.  First, the blue plastic used on the figure's legs is very prone to sun fading and discoloration.  Second, the smallest details on the figure are done in highly fragile gold paint.  Finding a Ripper with perfect gold on his armband, knife, necklace and, especially, rings is very difficult.  Third, the mohawk and beard on his head have a number of angular points that make them very susceptible to paint chips.  Finally, the black paint on the figure's belt, holster and boots is also prone to wear.  If you can find a truly mint Ripper, though, he still won't cost you much.  The figures tend to max out around $12 if the figure is gem mint and has the filecard.  But, even slight wear can cut that price in half or more.  Every collector owes it to themselves to have the original three Dreadnoks.  Even if the overall theme went too far, the original three are a great way to both remember the '80's and appreciate the Joe line's heyday. 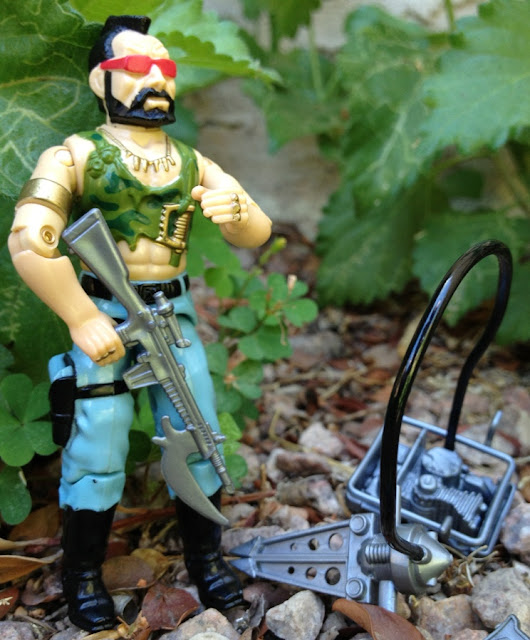 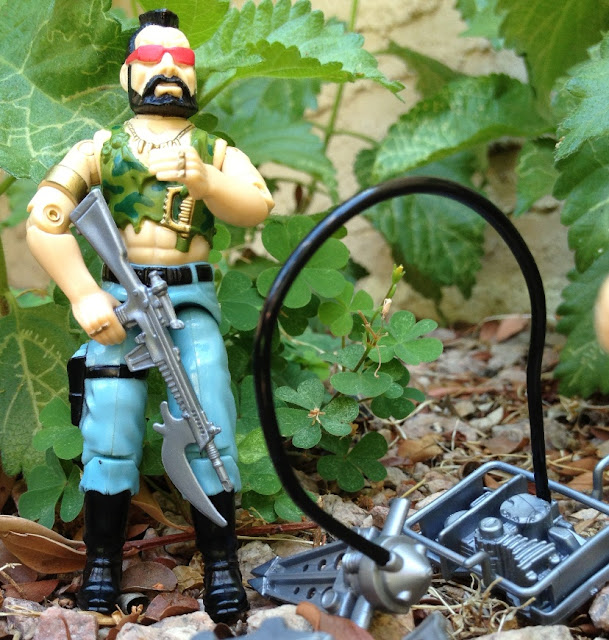 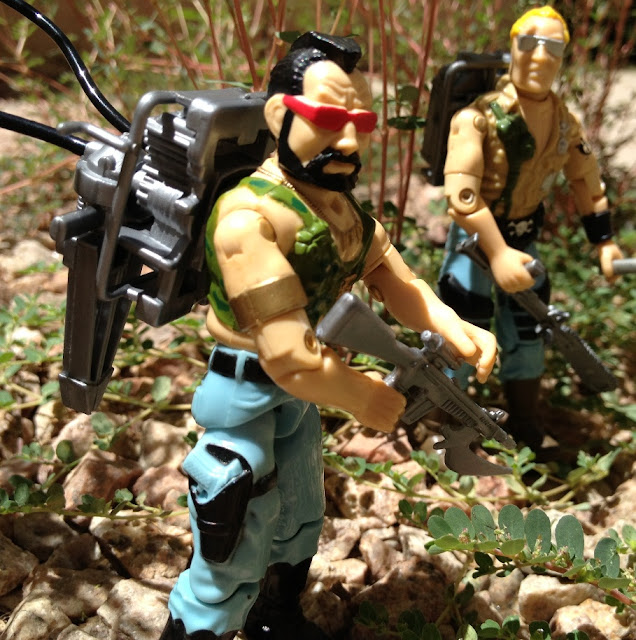 Posted by Robot_Sonic at 9:30 AM
Email ThisBlogThis!Share to TwitterShare to FacebookShare to Pinterest
Labels: 1985, Dreadnok, Ripper