In 2004, collectors were likely to lament the figure choices that Hasbro has offering in the ARAH-style.  The year had started off strong with the Cobra Infantry.  As such, anything following that was going to look worse than it really was.  Plus, in 2005, Hasbro continually lowered the bar in terms of figure offerings.  As such, the 2004 figures have fared much better in retrospect and even the Joes have found some after market life.  However, originally, many of the Joes offered in 2004 had very different looks.  Most times, collectors would never know of these alternate designs.  But, in 2004, Asian Joe sellers were able to get their hands on large quantities of unproduced Joes and made them available to American collectors.  At first, people went nuts for these alternate figures.  Then, demand died down and prices fell: dramatically.  Since the, though, the source of most of these figures has dried up and we are finally able to look back on the figures for what they were: a great opportunity to augment a Joe collection with rare, unproduced, full production level figures.  In many cases, though, the choices that Hasbro ultimately used at retail were the right ones as some of the unproduced figures are awkward, uninteresting, or just plain goofy.  But, in some cases, collectors missed out on a great rendition of a character.  Such is the case with the alernate Anti-Venom Mutt.

Mutt is one of my favorite early characters.  I liked him in the comics and his figure was one of the most interesting offerings in the first three years of the line.  Plus, to this day, I am a dog lover and find an affinity for those who care for their animals properly.  As such, Mutt got a lot of use in my childhood collection...until I broke him.  After that, it was many years before I was able to acquire another, high quality Mutt figure.  To this day, it is a great temptation whenever I see a nicely conditioned, complete Mutt for sale at a cheap price.  While I don't have any real use for multiples of the figure, I do like to have extras of my favorites lying around.  (I have several V1 Flint figures and try to acquire one every so often for the same reason.)  Mutt fits that category.

But, I was highly disappointed in Hasbro's Anti-Venom Mutt figure.  The tan coloring really didn't do anything for me and the lack of V1 accessories made it hard to enjoy the figure.  The worst part, though, was the painted head.  I hate painted heads when the dominant color is flesh.  It makes no sense to me to paint a figure that way, especially one with a removable helmet.  The paint rubs all too easily and leaves you with a damaged figure after just a few uses.

This figure remains one of the best versions of Mutt.  While I like Mutt's combat roots and look of the V1 figure, I actually see him as more of a law enforcement type.  As such, having a version in blue is perfect.  He can match the 2000 Law figures, Supercop and the vintage versions of Shockwave.  I have law as the leader of the Joe law enforcement forces.  He is the most tenured but also the most battle hardened.  As such, for going after the types of criminals who require the Joe's attention, Mutt is the perfect the leader.  He is the type of hard core fighter who will get nasty when he has to and isn't afraid of the consequences.  To Mutt, the ends justify the means and he isn't going to let law, rules or pro

There are lots of theories surrounding these figures.  First, there are two distinct versions of unproduced Anti-Venom figures.  There is the more common light blue set which features the subject of this profile.  There is also a much more scarce dark blue version.  It is likely that the dark blue set was a failed concept due to its similarity to Cobra colors.  From there, the blue was lightened.  But, that was also rejected for whatever reason.  That ultimately lead to the tan colored figures who were released at retail.  Of course, that is only the theory.  The true story has not come out at this point and it is unknown if it ever will.  But, these figures are now part of the collecting mythos and should be treated as such.

The V1 Mutt mold has had a long life.  The figure was released in the US in 1984 and 1985.  It was also available in various gift sets.  In the late '80's, the mold went down to South America where it was released in Brazil and Mexico.  For some reason, though, the mold was altered in South America and the tell-tale patch on Mutt's chest was removed.  In 1989, Estrela produced a Mutt as part of the Slaughter's Marauders subset that was released in the US.  This figure is also missing the insignia.  In the early '90's, Hasbro reacquired the mold and produced another exclusive Mutt figure in Europe.  This figure was also missing the insignia.  After that, the original Mutt mold disappears.  The mold used for this figure is actually a re-make based on the original.  You will see that the insignia has returned.  If you take Mutt parts from the Anti-Venom Mutt and try to match them with arms and heads from any vintage Mutt, you will find the parts do not match.  The look on this Mutt is similar to the original, but is actually an all new mold rather than a product of the Hasbro warehouse.  As it was so new, I find it odd that the figure was not used again beyond the Anti-Venom set.

If you want an alternate Mutt, the days of easily finding one are gone.  For a time, these figures went in the $15 range on Ebay with some going even less.  There were many samples, though, that went for substantially more than that during the availability window.  These days, though, you are pretty much going to have get lucky and go through a collector who either bought multiples or who is liquidating their unproduced collection.  As such, you're going to pay a premium for this figure, too.  While it's not going to set you back $70, it might cost you $50.  Truth be told, there are hundreds of these figures out there.  But, they were absorbed by the collector market and the type of individual who tended to be interested in these figures when they were available is also the type who is unlikely to part with the figure unless they have extraordinary circumstances.  But, it can be done and those patient enough to seek out figures like this Mutt can do so.  From my experience, the search is very worthwhile as this is one of the best versions of Mutt ever created...even if he is unofficial. 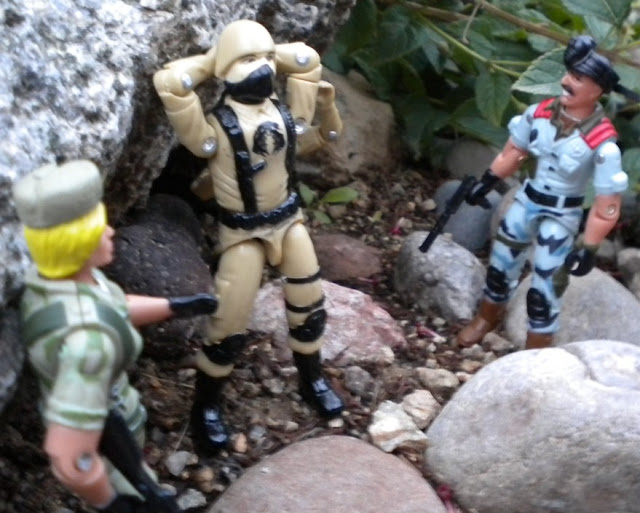 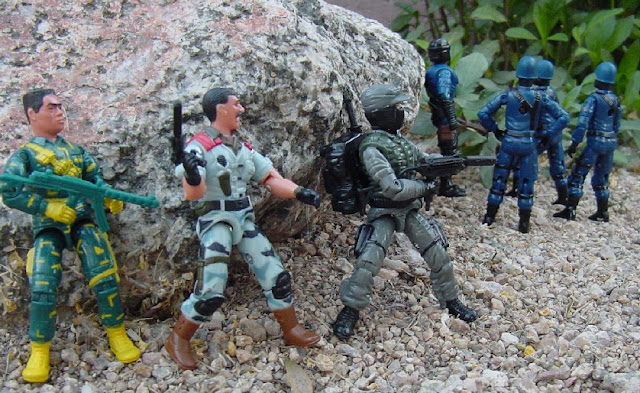