There are some characters in the Joe mythos who have taken on greater significance far after their vintage media days were over.  In some cases, this the result of their figure being rare.  Other times, it is due to some modern Joe media outlet culling obscure recesses of the Joe world for something new.  And, some times, it is just a hidden little filecard gem that modern collectors latch onto.  It is this final scenario that has made the character of Mercer into much more than he ever was in the vintage line.

1987 was really the last year I collected Joes as a child.  I was heading towards high school and collecting Joes was not something I wanted to move along with me.  The fact that the 1987 G.I. Joe figure lineup included some real stinkers for figures certainly helped mature me.  Still, most of the 1987 Joes became part of my collection and were featured members for a short time.  Some, like Falcon and Outback, became icons and have remained relevant even today.  Others, like Fast Draw, were fun for a week and then became background fodder.  The Slaughter's Renegades set was both.  Almost immediately, I had no use for Red Dog or Taurus.  Both were quickly relegated away.  The Mercer figure, though, resonated with me.  I liked the design, the colors, the accessories and the look of the character.  As such, Mercer quickly joined the Tunnel Rats and Flints of the world in the main rotation of my Joe world.

When I returned to Joe collecting as a adult, I found the 1991 Mercer figure.  Another solid mold, that take showed a more mature Mercer who was not the lost soul that the 1987 version seemed to represent.  The 1991 character, though, also had a different file name.  What was likely just a copy editor error on Hasbro's part in the early '90's, though, became the impetus for collectors in fledgling online Joe world of the late 1990's to create elaborate backstories around the Mercer character.  Mercer then became much more popular as collectors realized the character's potential.  In time, some of this popularity dimmed.  (It always does.)  But, Mercer was much more popular than he had ever been in 1987.

As a mold, this Mercer has great potential.  The chest, waist and legs are from the Mega Marines Clutch figure.  The Mega Marines have always been a subset of figures that collectors have felt were under appreciated due to the poor color choices of the original releases.  That is true.  Unfortunately, Master Collector did not choose to capitalize on this mold's potential.  Instead of finding decent colors, they used a base of cream and blue.  The blue, along with the orange around the figure's neck, are an homage to the vintage Mercer figure.  But, for a character like this, I would have preferred a figure that was not bound to prior looks and used colors that were more flattering to the mold.  The bare arms from the 1992 Gung Ho figure are muscular enough to work for the character.  But, again, they were also likely a shout out to the vintage mold's bare arms as well.  The head is all new.  It is based on the vintage figure, but is a new mold with some nuance.  It is true to the character, though, and shows the young Mercer visage that is more in line with the character I used as a kid.

While the choice of colors for this figure is suspect, the paint applications are not.  Master Collector does go all out on their convention releases in terms of color differences to bring out the details of the mold.  Mercer is no exception.  The figure features flesh, brown hair, eye whites, cream, light brown, black, gold, blue, dark brown, olive green and, just for good measure, a red anti-Cobra tattoo on the figure's left arm.  No less than 11 different colors appear on the figure.  The aesthetic of cream over blue may not be the most useful motif.  But, the overall figure quality is far above just about anything seen in the vintage line.  One limiting factor of the color scheme, though, was that it appeared on all three Renegade figures as well as the Sgt. Slaughter released at the convention.  The theory was a unified uniform.  The reality is banality.  Stand alone, Mercer can work.  But, with the other 3 member of his sub set, the limitations of the color scheme become too apparent.

Mercer's accessories are neither memorable nor terrible.  He includes a cream colored version of Big Bear's backpack.  It fits the figure, even if the color is odd were it not matched to the figure's body.  Along with the requisite clear collector stand, Mercer includes two weapons that were molded during the repaint era for use with the Joe vs. Cobra style figures.  One is larger weapon with no stock.  Frankly, I despise the mold.  I didn't like it when it was first released and don't like it now.  It's well detailed and in scale with ARAH style figures.  But, it just does not click with me.  His other weapon is a smaller sub machine gun.  It is a much better weapon and is my gun of choice with the figure.  It is not as unique as Mercer's vintage silenced pistol.  But, it works for the character.

Alas, Mercer's days as a prominent member of my collection are largely gone.  I'm not even sure if I have a vintage version in my collection any more.  This Mercer, though, is a good enough replacement.  Without Red Dog and Taurus from the set to give cream and blue overkill, this Mercer works as a way to break up the monotony of much of the modern Joe line.  From time to time, I may display him with other figures from the 1987 era.  But, Mercer was always more of a loner to me.  He wasn't really ingrained with the traditional Joes.  So, having him by himself seems like a waste.  One thing I've learned about my collecting habits, though, is that whatever is old becomes new again.  So, at some point, I'll be nostalgic for Mercer and you'll start to see him in the background of various photos around the site.  I just don't know when that time will come.

As a convention exclusive attendee release, this figure had a very low production run.  Historically, low run, attendee only convention items have appreciated greatly on the secondary market.  Many often trade for 3 to 5 times their original price within weeks of the convention.  Initially, the Renegades set looked like it would go that way.  But, the interest in the set quickly fell due to the poor design and, generally, unpopular characters.  For a long time, sets would sit unsold at their original price.  These days, interest has dropped even further.  Mint and complete, Mercer figures can be purchased for under $7.  Red Dog and Taurus sell for even less.  It can take a while to find them, though, since so few collectors who dropped nearly $15 per figure at the convention are so eager to take that kind of loss on them.  For those prices, the figures can be a nice break from the sea of sameness that heavily defined the repaint era.  And, having a new take on the young Mercer is always nice.  But, this figure has definite shortcomings and is, in my opinion, inferior to the original.  Since vintage Mercers aren't exactly lighting up the price charts these days, either, I'd simply buy the vintage version and call it good for the character. 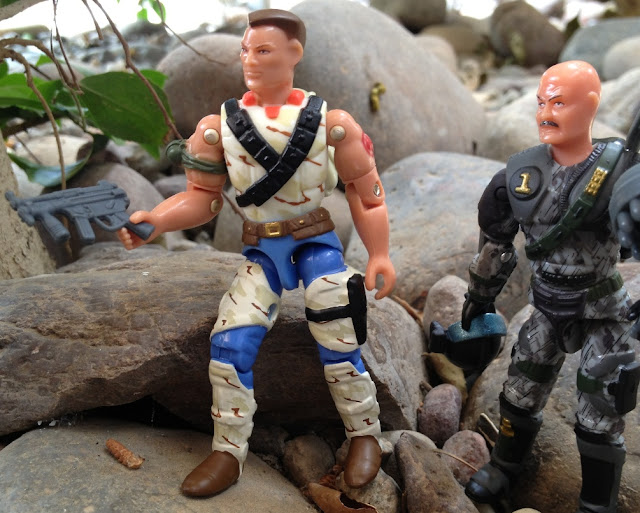 Posted by Robot_Sonic at 9:01 AM
Email ThisBlogThis!Share to TwitterShare to FacebookShare to Pinterest
Labels: 2006, Convention Exclusive, Mercer, Slaughter's Marauders