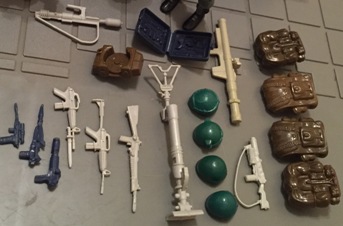 In very early 1983, I acquired the first Battle Gear pack.  It was odd to have only 4 G.I. Joe figures (Clutch, Hawk, Snake Eyes and Breaker) but have the gear for every figure except Zap and Short Fuse.  It was in short order that I snapped the thumbs of Hawk with either the accessory pack M-16 or M-60.  But, that is a story for another time.  It was the 1984 accessory pack that really took hold of the 10 year old me.  My fascination with it bordered between everything that was so perfect about the notion of accessory packs and everything that was so done so wrong with them.
In 1984, I had abandoned Star Wars toys.  From October of 1983 on, I was only a G.I. Joe aficionado and spent my time playing with those toys, almost exclusively.  The small pieces of the Joe line, though, were tough to maintain in any sort of good shape when they were shared with a 7 year old and a 5 year old.  So, throughout 1984, I constantly found my prized G.I. Joe figures and accessories being lost or broken while I was away as school or otherwise indisposed.  Enter the battle gear packs.  Ostensibly, these were cheap ways for parents to appease their children who lost accessories and didn't want to replace an entire figure.  The sets included helmets, backpacks, guns and other parts that were designed to re-arm figures whose accessories fell victim to the vacuum, back yard or other fates that could only be designed by kids of the 1980's.

You can see from the photos below that I spent some time "customizing" my accessory pack weapons.  I would never damage any of my figures' original accessories.  But, I was very willing to experiment on accessory pack items.  You will see an Airborne rifle missing the bayonet and another missing the stock: two early attempts to make the weapon something a little different.  I also cut off the strap and stock of one of Gung Ho's grenade launchers.  I then super glued the remaining piece to the underside of a Snow Job rifle.  It was my first attempt at a rifle/grenade launcher combo.  You will also see that my set is incomplete: missing landmines, the AK-47 and the Dragunov Sniper.  I scoured every deep box and bag that might have old Joe accessories to find even this many examples of the sets.  Through the years, I sold off most of my weapons: often as add ons with lots of figures who were severely off condition or broken.  It was a way to increase the interest in junk figure lots without losing any real accessories.  But, it also cost me complete versions of the various Battle Packs.

Battle Gear was likely extremely popular.  The sets were released from 1983 through 1988.  If you ever acquired collections from their original owners, you know that it was basically unheard of for a collection of any size to not have Battle Gear accessories strewn around with original gear.  Pretty much every kid who had any number of G.I. Joe figures had a Battle Gear set.  They were good for both replacing lost weapons, but also getting a nice armory in reserve or outfitting figures that had not included weapons (like the vehicle drivers of the time) with gear that was befitting their specialties.

I recall acquiring one of these sets in late 1985.  At the time, my Joes were set up in my parent's basement.  When I got the set, I set all the weapons out in nice little rows and had an array of Joes and Cobras set on opposite sides who then had to sprint to the pile to get their weapons.  (Very XML kickoff-ish.)  From there, I lined the weapons up in the racks inside the Headquarters.  Beyond that, though, I don't have many memories of the packs, besides being disappointed every year when the pack was missing the one accessory I had lost and really wanted. (Mutt's Nightstick, Blowtorch's mask, Flint's shotgun, etc.)  I did have fun customizing the weapons.  But, the super glue I used tended to melt the plastic and didn't hold together for very long.  So, the accessory packs were mostly relegated to use by my junk figures.

A few of the sets contained some excellent add ons that were great updates to any collection.  The tan gear from set #1 was a perfect match for the 1983 Falcon Glider Grunt and the 1984 Clutch.  (The visors were also exact matches for the standard version visors.)  In the first Cobra Battle Gear pack, there were blue missiles for Scrap Iron's missile launcher.  These matched the pre-production colors shown in the 1984 catalog.  The 1985 set included a new visor that was opaque and had a nose notch.  It would most famously be used with Starduster.  But, the 1984 pack is pretty light on useful weapons.  The grey G.I. Joe accessories were somewhat useful for later arctic figures.  But, that was a stretch.  The brown packs didn't really fit with any of the figures for whom they were intended.  The blue Cobra weapons are better.  The blue Destro pistols found years and years worth of use in the cockpits of my Hiss Tanks as the personal side arms of the Hiss Driver.  But, mostly, the accessory pack gear became fodder for the rank and file junk figures who would comprise the nameless terrorists and thugs who would be generic villains for both Joe and Cobra to fight and kill off.  I needed guns for these figures and wouldn't want to strip any of my good figures of their weapons to outfit a no name who was going to quickly die.

The general summary for this Battle Gear pack and the entire concept in general is that the colors were weak even if the weapons were decent.  Had every pack been in the generic lighter charcoal color of the first pack, they would have been sets for the ages.  Why Hasbro chose such non traditional colors for their sets simply made no sense. At the time, there was no collectible issue with which Hasbro would have been concerned.  It's possible they simply saw the alternate colors as a way to bring color to the packages hanging on retail shelves.  (It is known that Hasbro deliberately chose figure colors within a given year that complemented each other when on display at retail.)  It's also possible that they didn't want a kid to get a Battle Gear pack and then have no need for a figure.  If you wanted Gung Ho for his grenade launcher and you could get it cheaper and in the same colors in a Battle Pack, then you didn't need to buy Gung Ho.  I don't really buy that notion, though.  I would love to know the reason for the colors, but it's likely lost to time.

Battle Gear packs were the bane of G.I. Joe collectors in the late 1990's and early 2000's.  It was extremely common to buy up unseen lots of figures (pictures were sparser in those days) that were advertised as "complete" only to get them and realize that "complete" meant complete with Battle Gear pack weapons.  Some dealers argued extensively that Battle Gear equipment could complete figures and there was a time when "complete with original accessories" was the way to convey that the item you had for sale did not include the more common Battle Gear parts.  We seem to be past those days.  And, some of the Battle Gear parts (especially from the early sets) have gotten harder and harder to find as collections have been broken up, resold and stored away in attics and basements.

Battle Gear Pack #2 sets are cheap.  You can get them still MOC for around $15.  Loose, complete sets tend to sell in the $8 range and they will drop to as low as $2 or $3 per set if you take out one or two of the Cobra pistols.  At the price, there is no reason to not have one.  But, if you have ever bought aftermarket lots or collections of figures, there's a pretty good chance you already have most of the items from the set.  Some of the Battle Gear packs contain items that are excellent add ons to a collection.  But, set #2 is not one of those.  And, as such, is priced accordingly.  As a source of customizable fodder, Battle Gear sets are a solid buy.  As an interesting piece of Joe collectordom, the same can be said.  But, as a valued part of a collection, these sets simply fall short.  They are nice ideas and it was something that Hasbro did for Joe collectors that Kenner really never did in any significant way for their Star Wars line. 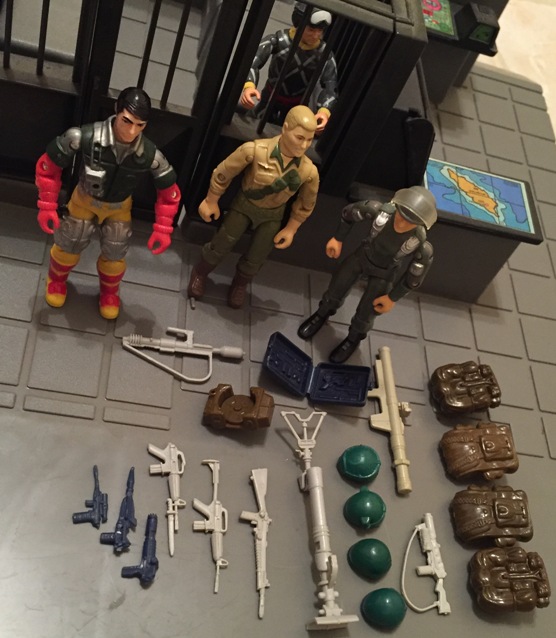 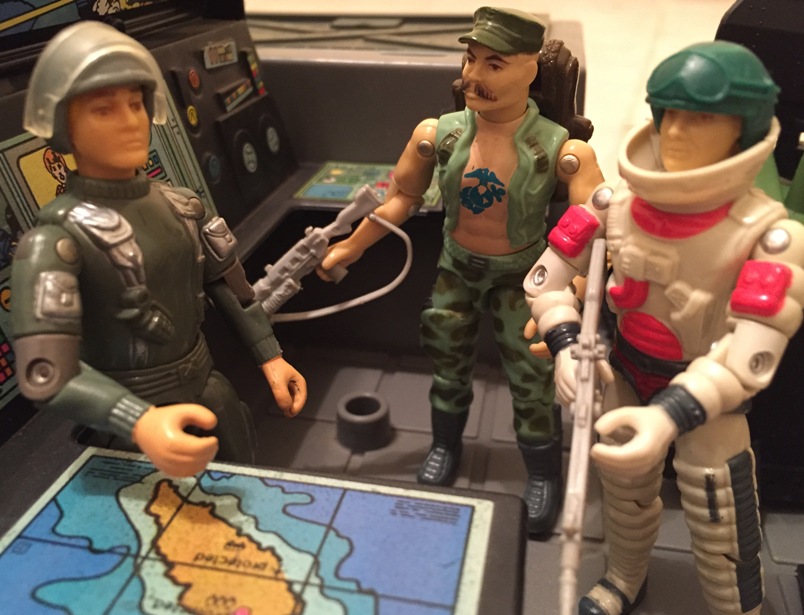 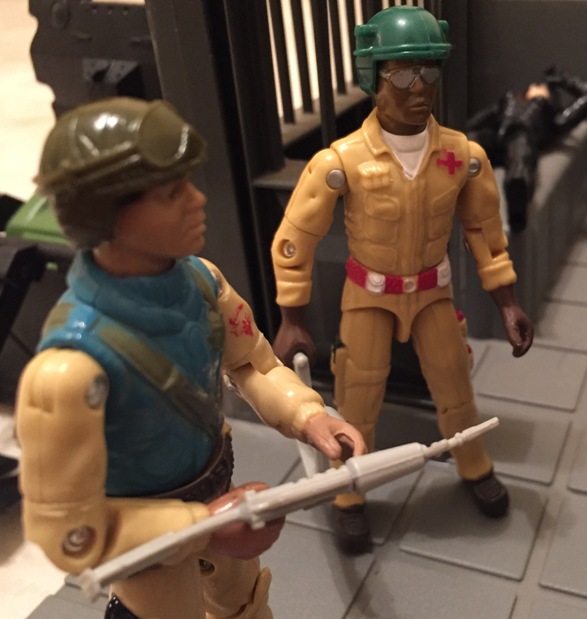 Posted by Robot_Sonic at 3:30 AM
Email ThisBlogThis!Share to TwitterShare to FacebookShare to Pinterest
Labels: 1984, Battle Gear