In the early days of online Joe collecting, the collector base was almost exclusively focused on 1987 and earlier figures.  Finding figures released in the 1990's was very difficult and most were summarily dismissed.  While I've long maintained there were lots of 1990's era gems, the reality is that the 1990 lineup itself is easily on par with any year from the 1980's.  It includes a strong lineup of Cobra army builders, new characters and specialties.  The figures are nicely colored and fit in with the prior years.  The best part, though, is that the figures are accessorized to the max.  Many include more gear than is really necessary.  But, the gear was designed to be specific to the figure and enhance the character.  A great example of this is the unheralded 1990 Sub Zero figure.

The Joe line is full of classic cold weather troopers.  Snow Job and Blizzard are iconic characters with accessories that defied toy conventions at the time.  Iceberg and Frostbite were well designed figures who were perfect in support of their environmentally similar cohorts.  Sub Zero follows in the vein of the first two as he is laden with gear and had a solid design.  His base blue is a bit bright, but works within the arctic context.  (You get some fairly brilliant blue hues in the right icy settings.)  He is loaded down, though, with a massive machine gun, bi pod, mortar, backpack, shells and snow shoes.  The result is a figure that, when all geared up, stands equally proud among his fore-bearers.

The Sub Zero figure has a few odd characteristics.  First, the mortar.  It has no bi pod to stabilize it.  If you stand it straight up, it will retain its position.  But, adding any angle will result in immediate collapse.  The catalog photo of Sub Zero showed a white bi-pod on the mortar.  It appears this bi-pod was the same as was included with the machine gun, just in a different color.  You can not tell from the photo if Sub Zero was meant to include two bi-pods in differing colors to match his weapons.  But, the accessory is shown in white.  The machine gun bi-pod does not appear on Sub Zero's card art, either.  So, it may have been never intended for the machine gun but was added there at a later time.  The second odd thing is that Sub Zero's backpack has three tabs on it.  The largest tab is designed to hold his machine gun.  (I tried for 20 minutes to get the gun to stay on the pack long enough for a photo, but mine just pops off after a few seconds.)  The other two, though, have no purpose.  Were these meant for another, redacted accessory?  It might be that the original design had slots in the mortar shells so they could be stocked on the pack.  (That would have made sense and been inline with the time.)  But, with nothing to store there, Sub Zero's pack appears a bit off.  He seems unfinished and the general appearance of his gear always makes you think you are missing a few accessories.

The biggest source of contention on the figure, though, is his head.  The odd shape of the head coupled with the bizarre design choice for the hood creates a look that is just odd.  Sub Zero looks like a fish peeking through the hole on a barrel.  His face also makes him look pretty pissed off.  But, if you were forced to wear a coat with a hood collar that looked like a blue bonnet, you might be pissed at the world, too.  But, the head limits what is, otherwise, an exceptional figure.  The rest of the mold is solid with enough details to be interesting, but not so many as to be distracting.  The two tone color of blue and white work well together and there's enough grey to make him visually interesting.

For me, though, this figure has never found a real purpose.  He did not enter my collection until after I lived in the desert.  For the time I moved back to a snowy place, any use of the character was represented by the 1993 repaint.  So, while I've long admired the figure's gear and design, the reality is that I've not had any occasion to really photograph him in his native environment.  Maybe one day this will change.  But, that's not going to be for a while.  Until then, this figure just sits in a baggie, in a plastic tub waiting for the rare appearance in a dio or as a vehicle crew member.

Like a lot of the 1990 figures, though, since this guy came after my childhood, I have no memories of him as anything other than an adult collectible.  He was in one my first lots of 1990's figures.  But, was overshadowed by the many figures that attracted me to the collection in the first place.  He was a nice addition and something that I thought had potential.  But, with dozens of other new figures coming into my possession for the first time with the same purchase, Sub Zero was lost in the shuffle.  Were I a kid in 1990, though, I'm sure I'd have found this figure quite strong and it would have had quite a few adventures out in the backyard during the winter.  Timing prevented that.  But, it doesn't cloud another strong entry into the Joe pantheon.

Sub Zero got a bit of use.  After his appearance in 1990, a darker colored version appeared in the 1993 Arctic Commandos mail away.  That figure is probably better than this 1990 version.  But, he only includes a recolored Dodger rifle and is missing the gear that makes the figure.  If you can swing it, accessorizing the 1993 with the 1990 figure's gear is the best way to go.  In 2005, Sub Zero's body made a comeback.  It was used for the spectacular Winter Operations Snake Eyes figure.  The cammo and overall design combined with the Snake Eyes head made for one of the best figures released in the repaint era.  But, the character of Sub Zero was no more.  Arctic repaints are tough to pull off.  And, the few arctic figures that did get the treatment between 1997 and 2005 were, almost to a figure, much worse than the original designs.  So, getting the awesome Snake Eyes instead of a terrible Sub Zero figure was OK.

Like all white plastic figures, Sub Zero is prone to discoloration.  However, his backpack is extremely prone to discoloration and you'll often see pristine white figures and mortars paired with yellowing packs.  So, it can take some doing to find a completely brilliant white figure and accessories.  But, they aren't expensive.  You'll see mint and complete with filecard figures selling in the $9 - $12 range.  Dealers will charge up to $20 for the same figure, though.  You can get carded figures in the $30 range, too.  For me, it's a worthwhile price just to complete the 1990 run.  The figure's head somewhat limits his value.  But, the great gear and decent coloring make up for it. 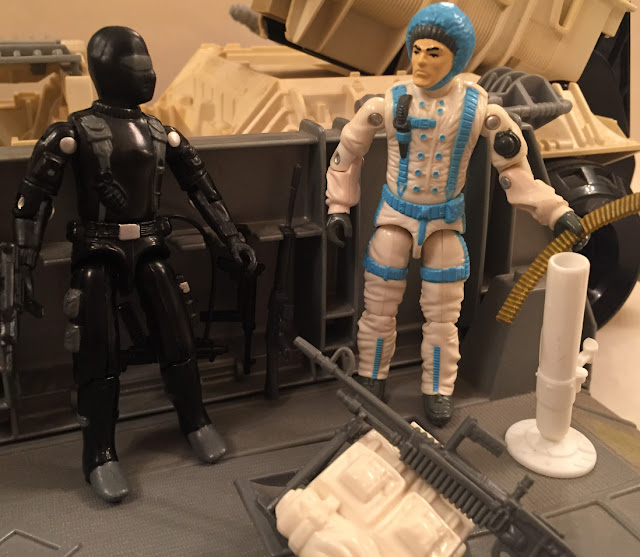 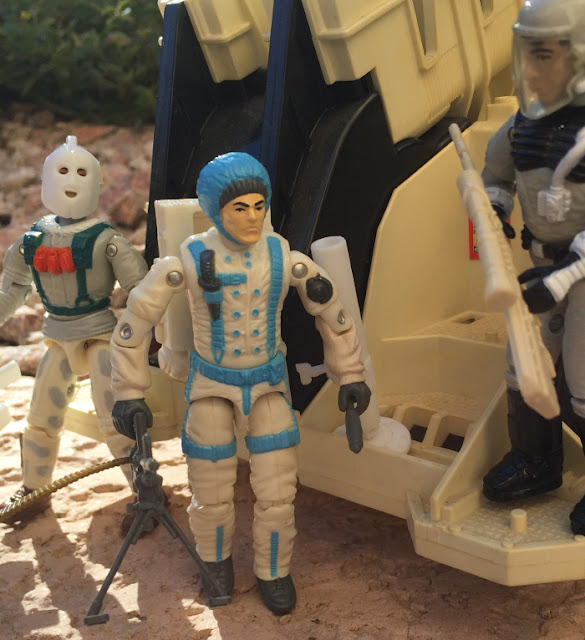 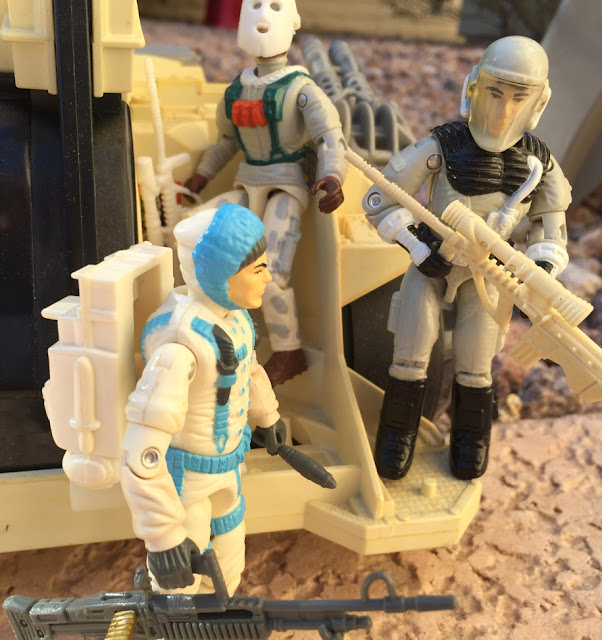 Posted by Robot_Sonic at 2:42 AM
Email ThisBlogThis!Share to TwitterShare to FacebookShare to Pinterest
Labels: 1990, Sub Zero