1994 was supposed to be a great Joe year.  The retail line had been struggling for a couple of years.  But, it was G.I. Joe's 30th Anniversary.  And, Hasbro had big plans to celebrate the milestone of one of their flagship lines.  Along with a stable of 12" figures, Hasbro shrunk down some of the classic G.I. Joe icons into their more popular 3 3/4" scale.  This resulted in adult collectors of the originals to both bemoan the injustice done to their childhood classics but also rush out and buy them up with hopes of future riches dancing in their heads.  In short order, though, it became apparent that Hasbro's approach of melding the 3 3/4" scale with the 12" Joe mythos didn't create a lasting collectible.  The 12" collectors abandoned the 3 3/4" renditions in favor of the new 12" offerings.  And, 3 3/4" collectors found the homages boring toys that lacked the characterization that drove the A Real American Hero franchise.  The result is a group of neglected figures from the final year of the Joe line that are generally unloved.  Among them, though, are some solid molds that work for generic army building.  But, there is one figure for whom I have found little use in my collection: the Action Pilot.

The Action Pilot looks very dated.  In an of itself, this isn't bad.  All of the four figures are dated and the diver is equally bad as the pilot. But, pilots have come a long way since 1964 and the Action Pilot looks out of place with the futuristic pilots that have been Joe's hallmark since Ace in 1983.  The real problem, though, is the helmet.  The helmet and gas mask are not the same mold from the 1992 Ace.  They are similar, but not the same.  This air mask is much smaller and does not fit as tightly with the helmet.  So, the main redeeming quality of the figure (the helmet and mask) are mostly useless and make the figure even more out of place in the cockpit of any Joe fighter plane.

When I pulled this guy out for photos, I was shocked at how much the head looks like Sterling Archer.  So, for any customizer out there, this figure is a great piece of source material to make a custom Archer figure.  The 60's style, slick black hair, strong cheeks and jaw and the blue eyes all fall into the archetype of a heroic figure from that time period.  It's hard to fathom that this Action Pilot is an homage to a figure that's now over 50 years old.

In 2000, my Joe collection was bursting at the seams.  I was buying up large lots of figures every week and supplementing these purchases with smaller, targeted acquisitions.  For a few weeks in 2000, I got on a 1994 Action Series kick.  I needed all 4 of the figures to complete my collection.  And, I thought that they may make for decent army builders.  So, in a very short time, I made the Action Series figures the focus of my acquisitions.  In very short order, I acquired seven or eight figures.  All were MIB as that was the only way you could find them at the time and they were dirt cheap: you could get all 4 for under $25 shipped.  As I opened the figures, though, I found myself disappointed in them.  The Soldier and Marine were cool enough.  But, their bulky sculpts were annoying.  The Diver was retro cool.  But, again, there were aspects of him that simply didn't hold up against the Joe divers of the '80's.

The Pilot, though, was the biggest disappointment.  His large body made it difficult to get him into any vintage aircraft.  And, he was cramped in those into which he would fit.  His helmet and mask were definite downgrades from the 1992, 1993 and even 1997 Ace figures.  In short, he was an utter disappointment.  I had planned on purchasing many more of the Action Series figures as 2000 wound down.  But, after finding them so limiting, I turned my focus to other things and the Action Series figures in my collection today can all be traced to that short window in 2000 when these guys initially grabbed my attention.

Since then, the Marine and the Soldier have appeared in various photos and dios.  They were decent enough filler and were a nice match for the Joseph Colton figure that I like more than I should.  They worked as generic army builders that helped to balance out the Cobra armies that would be attacking.  The Sailor has appeared less frequently.  Every now and then, he makes an appearance since he's a nice addition to maritime forces.  If I had a Flagg, he'd be a staple on it.  The pilot, though, has really never left his drawer.  I tried using the mold a few times in the early 2000's.  But, his poor fit in most early Joe aircraft was a drawback from which he could not recover.  I like the notion of a pilot far more than I like the figure.  Even the Action Astronaut finds more use than the pilot.  That's a tough lot for a figure that is a pretty decent homage and includes decent accessories.

The Pilot's gear is cool and kind of lame.  He includes the requisite rifle and pistol that also appeared with the Marine and Soldier.  But, this time, they are cast in green plastic.  There is the helmet and ill fitting air mask.  The pilot then, though, includes a parachute pack based off of the 1985 Parachute Pack mail away.  The pack itself is a deeper green than the earlier offerings.  But, the main difference is that there are no manufactured in markings.  The parachute is plain white.  And, the belt is all new and no longer sports the nifty plug in for the Ripcord air mask like the mail away release.  It's always nice to get more parachute packs.  And, the green accessory color is a subtle difference from the more commonly seen black and brown.  But, when you have the other figures, the common accessories start to get a bit stale and the bulk of the chute prevents it from working on the pilot in his intended specialty.

The Action Pilot actually has three variants.  The yellow version was released as part of the single, boxed figures.  The figure was then recolored in blue and released in special 5 figure set that included the exclusive Action Astronaut.  The blue version isn't really any better than this yellow version and I'm not sure why the Pilot was chosen to get such a drastically different paint job in the set.  But, it's also a useful figure to have hanging around the Flagg.  The final version, though, is among the rarest G.I. Joe figures ever made.  It is an all black version of the Action Pilot that was only available at the 1994 G.I. Joe Convention.  This was a special figure offered by Hasbro to celebrate the 30th Anniversary.  It is an incredible obscure and rare release and easily crosses into a triple digit price tag now.  The pilot was among the figures that showed up as keychains around 1998.  That keychain was colored similarly to the boxed 1994 figure with another blue keychain figure available in a boxed set that was an homage to the 5 figure gift set figure from 1994 as well.

Right or wrong, collectors don't care about the 30th Anniversary Action series of figures.  Even now, they are shockingly cheap.  While you don't see dozens and dozens of unsold samples like you used to, they are not hard to find.  Mint in Box versions of the Action Pilot run $10 and that's only because no one leaves them to open pricing.  If they did, they'd be even cheaper.  Bought in a lot with other boxed figures, you can get pilots for $7 or $8.  Loose, mint and complete versions are few and far between because only a small contingent of collectors opened these guys up.  Most are still boxed.  Pretty much every Action Series figure in my collection was opened from a boxed sample.  It's just easier to get them that way and the price makes sense.  As an oddball one off, the Action Pilot is worth having, especially for the price.  But, unlike the other three figures in the set, I find little value in army building him.  The ill-fitting helmet and mask limit the figure's usefulness.  So, that really relegates the Action Pilot into the realm of figures I own to check off the list rather than figures I find fun to own. 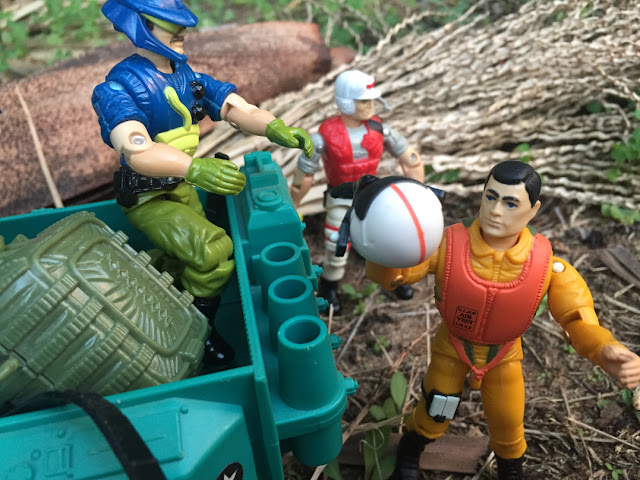 Posted by Robot_Sonic at 2:04 AM
Email ThisBlogThis!Share to TwitterShare to FacebookShare to Pinterest
Labels: 1994, Action Pilot