While I quit buying Joe figures in 1988, I never really left the hobby.  Aside from a few month hiatus from the comic, I was still acquiring something related to G.I. Joe every month.  At the end of 1992, I bought a few figures at retail, again.  I'd check the toy aisle on various shopping trips.  As I was in college, though, those trips were infrequent at best as my primary focus was on college life.  In 1995, though, that changed.  The driving force behind my newfound interest in toys was the retail return of Star Wars figures.  Hasbro's newly acquired Kenner division returned the classic franchise to 3 3/4" figure form in the latter part of 1995.  At first, I was not a fan of the bulky, oddly posed designs.  Slowly, though, nostalgia took over and I wanted the figures.  I picked up a few odds and ends as I found them in the sparse retail environment of my college town.  My girlfriend of the time bought me all the ships for my birthday.  But, she had not been able to find any figures.  This would be the theme of Power of the Force II's retail beginnings.  Over Christmas of 1995, I went home where a friend of mine had found 4 figures that I didn't know existed: Princess Leia, Luke X-Wing Pilot, Lando Calrissian and Boba Fett.  He had found them for a huge mark up at the local FAO Schwartz store.  Otherwise, these figures simply did not exist at retail.

As the calendar turned to 1996, my frustration with retail Star Wars continued.  I managed to find a solitary Luke X-Wing at a K-Mart on my way out of Cincinnati in early 1996.  But, there was no sign of the figure I most wanted: Boba Fett.  After failing for months to find him, I decided I was going to buy one from a second hand dealer over spring break.  I had my dad stop at a local comic shop on the drive home from school.  There, the store had a carded Boba Fett for $6.95.  I had planned on paying up to $8 for the figure.  So, I didn't balk at the inflated price and purchased my first Boba Fett figure since my childhood.

I sent away for a Boba Fett mail away in 1979.  My parents actually went to buy a new figure to get enough proofs of purchase.  His arrival in the mail marked the first package of toys I had ever received.  I played with the figure constantly...even taking him on a family winter trip to Pokagon State Park in northern Indiana.  Here, I forgot my original Boba Fett figure.  The fact I remember where and when I lost figure (37 years later!) shows how important he was to me.  (On a side note, if you find a vintage Boba Fett in the Pokagon lodge lost and found, it's probably mine.)  In time, another Boba Fett showed up in our vintage collection.  I'm pretty sure both my brother and I had our own.  So, the adventures continued despite that early loss.

My acquisition of this figure in 1996 brought Fett back into the fold.  And, this figure was light years ahead of the other options from the time.  The added bulk of the POTFII figures made more sense within the context of Fett's armor.  Plus, Fett being a later release, he benefited from the lessons learned of the less than stellar Luke and Han that came before him.  Plus, I was willing to be forgiving for a character that I so wanted to be in my collection again.  The added details of the backpack, cape and Wookie scalps and his updated rifle were exactly what I wanted out of a modern Star Wars line.  The panoply of colors looked like they walked right out of the movie.  But, then again, in 1995, we only had VHS copies of the movies that played on old, pre-HD TV sets.  Even the internet was so nascent that there was little reference material for the character available and most of that was either a blurry screencap or low resolution scan of an old trading card or magazine.  So, the nitpicky details that doom this figure today were less obvious upon his release.

As 1996 progressed, I picked up a couple of extra Fett figures.  I also bought the Shadows of the Empire repaint in a two pack with IG-88 when I found it at the Oxford Wal Mart while I waited to get an oil change so I could drive half way across the state to attend my cousin's wedding.  I really couldn't get enough of the mold.  At the time, Star Wars was a novelty.  People my age grew up with it and were starting to carry that love into early adulthood.  The Special Editions were still months away.  And, the Prequels were just a pipe dream.  The all Star Wars/all the time world we live in now was simply unfathomable.  And, because of that, Star Wars was still something that was somewhat fringe.

At the height of my Star Wars collecting days in the late 1990's, I probably had half a dozen or more of these figures.  I had a couple loose.  I had an orange carded version, the green carded version, the freeze frame carded version and multiples of many of them.  I fancied myself a "serious" collector even though I really didn't buy everything and I collected some of these items just to brag I had them.  In 2007, it came time to move my Star Wars collection.  I was back buying figures at retail and was upgrading all of the old POTFII era figures.  In my zeal to remove the clutter, I got rid of everything: often for about 1/5 of what I had spent at retail for it: nostalgia be damned.  A decade later, I had pangs of regret.  This was driven by the fact that I now had young kids and those early POTFII figures would be great for them as they were indestructible, cool and worthless.  I managed to find a bag of high quality figures at a local thrift shop.  I only bought the bag as it also had a high quality, unbroken 1982 Straight Arm Snake Eyes figure in it.  But, Boba Fett returned to my home.  The fig below belongs to my boys who enjoy playing with him and I don't have to give Hasbro $8 for a crappy 5 POA figure they made in 2017.

There was a time when Boba Fett figures were rare, expensive and popular.  People would pay huge amounts for this figure if he had one of the glove paint variants or the right cardback.  The mid 1990's were a silly time when it came to collecting toys.  But, Boba Fett is probably the most popular character among collectors and Hasbro obliged not only by releasing this figure many, many times: but also constantly making new and better Boba Fett molds.  As such, calling this figure worthless is an understatement.  Mint on Card versions of this Boba Fett sell for under $5.  (Though lots of dealers will sell a few for $10.)  Loose versions aren't easy to find because who wants to handle a figure for a buck or two?  And, frankly, if you're going to buy a Boba Fett figure to show off, there are dozens of better figures made subsequently that are equally easy to find and cheap.  This figure was in production for years and was shipped in many case assortments.  Hasbro was actually really good at keeping high demand characters on the shelves in 1997 and 1998: before the bottom fell out of the market.  But, seeing this figure again reminds me of why I loved it so two decades ago and why I also got rid of it when better Fetts came along.  It was fun, though, to recollect those mid 1990's toy runs.  It was a great time in my life and this figure reminds me of that. 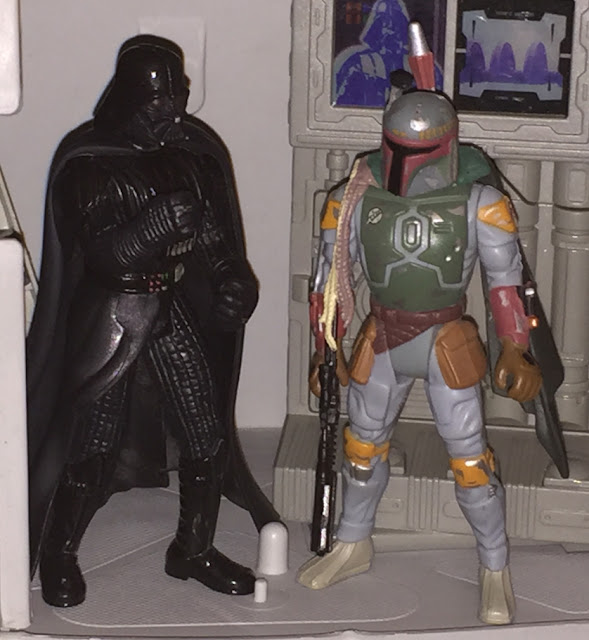 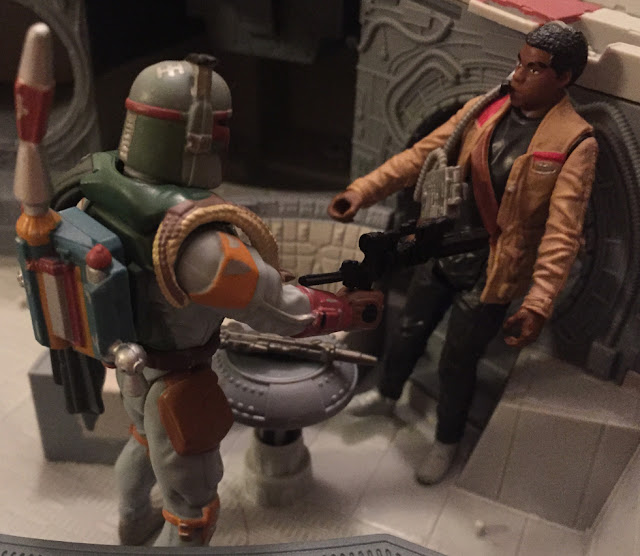 Posted by Robot_Sonic at 3:30 AM
Email ThisBlogThis!Share to TwitterShare to FacebookShare to Pinterest
Labels: 1995, Boba Fett, Star Wars