I did not know Gary Head.  I was a member of a forum where he was active.  But, our peak collecting timelines did not really overlap.  I occasionally read about one of his finds: the most lasting for me was the alternate heads for the 1982 Joe team.  But, right as he came into the collecting world, I was heavily on my way out.  In his time, though, he made quite a mark on the Joe world.  Between developing a strong bond with many Hasbro employees (not an easy task) and keeping abreast of the modern line, Gary was a huge presence in the Joe world.  His untimely death left a void for the community as a hole, but also his many friends in particular.

So, due to his unique stature in the community, Hasbro decided to release a tribute figure to Gary in 2015.  The figure, named Sightline, featured a unique grey and red color scheme that was fairly uncommon in the Joe world.  Collectors enjoyed the figure.  But, being only available as an anniversary sculpt figure, the official release also left many collectors without a tribute.  Enter Joe DeClassified.  This group managed to obtain Hasbro's permission to produce a Sightline figure in vintage Joe style for the 2017 G.I. Joe Convention.  Factory custom figure maker Red Laser was brought in to provide the actual figure based on a design from noted customizer Chad_Ghost.  The result is an excellent homage to the figure that was an homage to the man. 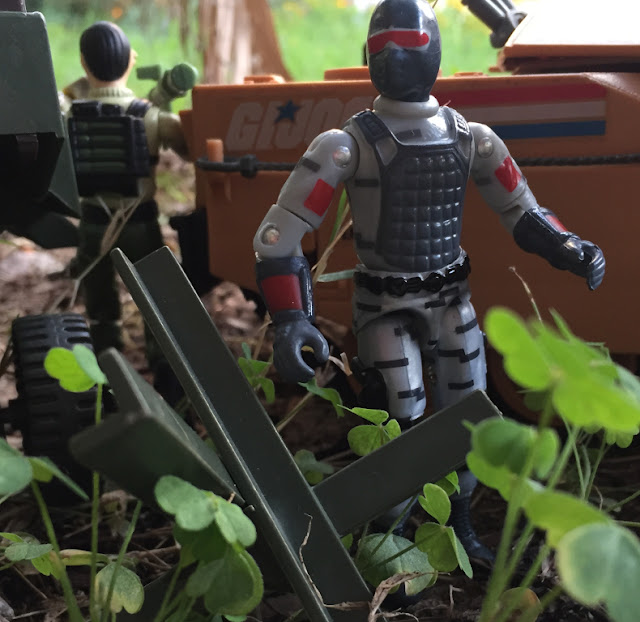 Quality wise, this figure isn't bad.  But, it has one glaring problem.  The figure's backpack will not fit into his back.  It's not even close.  You will Sightline's pack affixed to a Hasbro Steel Brigade figure in the photos below.  So, the pack's peg is just about standard size to work with vintage figures.  (It's a bit loose, but not so much as to render the pack useless.)  The issue is the screw hole in Sightline's back.  It is simply way too large for any pack to fit.  You can get around this with fixes like electrical tape.  But, I'm not a big fan of having to "fix" figures out of the box.  New stuff should work with no issues.

The Sightline figure includes some solid accessories.  He starts with a charcoal colored version of Recoil's rifle.  This weapon was available with the most common Steel Brigade figure and has long been a collector favorite.  It works with this figure.  Though, it is becoming overused by the various custom figure makers due to that popularity.  He also comes with the aforementioned black version of Duke's backpack.  (I always differentiate Duke and Airborne's packs since Airborne's has the cross on the inside and Duke's does not.  They are different molds, though they appear the same from the front.)  Where the figure gets interesting is that he includes a 1982 style Joe helmet.  It was rare to see a V1 Snake Eyes figure with a helmet.  (He was only ever released with one when he appeared as the first version of the Funskool Street Hawk figure.)  But, his head was designed to wear one.  In addition to the helmet he has a red 1982 style visor.  It is a never before seen color and is a welcome addition into the accessory fold.  I need to try it on a Flash or Grand Slam figure to see how it works.  The figure also includes a filecard and a a trading type card with fan made artwork.

Sightline uses parts remade from the V1 Snake Eyes, Flash, Trip Wire and Airborne.  They are a solid group of parts that also lend themselves to the 20 or so additional figures that Red Laser debuted at Joecon in 2017.  There is a bit of a color mismatch between the legs and the chest caused by a factory mixup.  But, the general appearance of grey, black cammo and red is a stark difference from most offerings using 1982 through 1984 molds.  You can set Sightline on display with Snake Eyes and, if Sightline is wearing his helmet, you don't feel that the figures tread upon each other.  For that reason alone, the Sightline figure is an excellent companion to to the early Joe team since he brings a color palette not otherwise seen.

If you attended the 2017 G.I. Joe convention at Disney in Orlando, you could get a Sightline figure for free as a special attendee bonus from the Joe DeClassified team.  There were around 1,000 figures made.  Each person who got a figure registered so that no one got more than one.  There were some bonus figures hidden around the convention area, though, that enterprising collectors could find.  Poor convention attendance, though, left DeClassified with around 400 remaining figures.  As of now, they are still working on how to distribute those figures as their permission from Hasbro to use the Sightline name stipulated that the figures could not be sold.  Most collectors have, so far, honored the implied agreement that these figures not be sold.  But, some have been.  And, since there are so many collectors who have not yet had a chance to acquire the figure and who desperately want it, the few sales that have occurred have fetched prices in the $100 - $125 range.

It's likely that those prices are unsustainable.  For one, some of the 400 remaining figures will get into the collecting community through toy shows or other means.  This will reduce demand.  But, in time, this figure will fall into more obscurity.  There are simply so many factory custom figures being produced at this time (There's well over 50 that have debuted in the first 6 months of 2017 alone!) that fatigue will start to deter collectors.  Once the figure is replaced as the "it" item in the collecting community, interest in him will fade.  As the figure is distinctive, he will retain more popularity than many other figures.  But, there's also nothing stopping repaints of this figure in similar colors or other homages from additional sources.

If you collect vintage Joes, it's been a rough decade.  There has been, basically, nothing to buy outside of a handful of convention sets.  And, those are nearly a decade away now, too.  Fortunately, enterprising collectors like Red Laser and Black Major have filled the void.  While we only saw a few molds produced during the early years of the factor custom game, 2016 and 2017 have seen the ante upped with classic Joes, immortal Cobra army builders and a plethora of new figure designs that have allowed a vintage Joe collection to expand in ways Hasbro simply could not deliver.  I look at what the factory custom producers have done and they have made more "must-have" figures for me than Hasbro made from 2000 - 2007.  That's amazing and shows that had Hasbro listened to collectors during that time, they might have achieved much more success.

For now, though, it's a good time to be a vintage Joe collector again.  There's lots out there to buy: much of it geared squarely for collectors based on their long unfulfilled wish lists.  Sightline is one of those figures that I didn't realize I wanted until I got one.  I can't thank Wowboy enough for his generous gift of this figure to me.  Sightline brings something missing to my collection and helps add visual diversity among the figures who comprised the formative years of my childhood.  He helps breathe new life into toys that have been staples of my life for 35 years now.  It saddens me that Hasbro isn't able to tap into that passion.  But, guys like Red Laser and Black Major have.  And, all our collections are better for it. 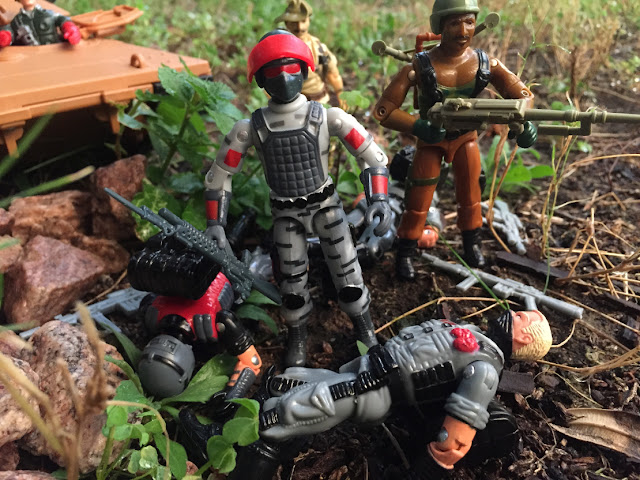 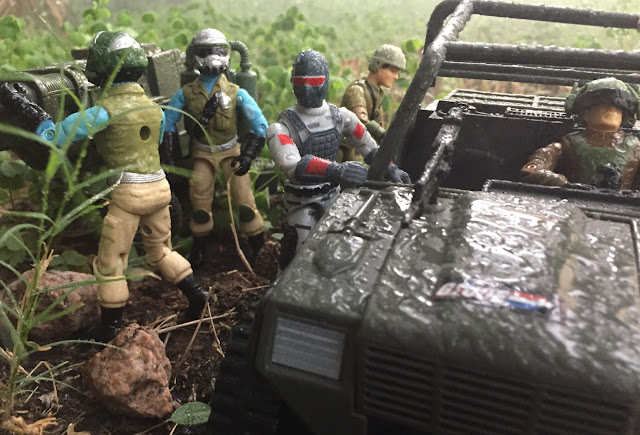 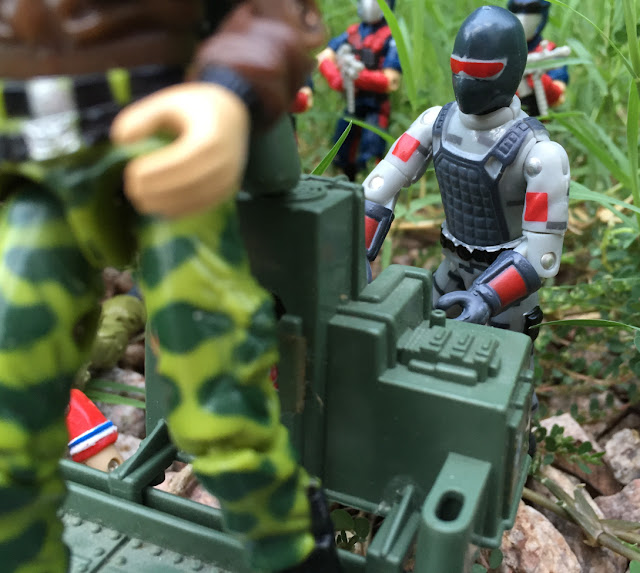 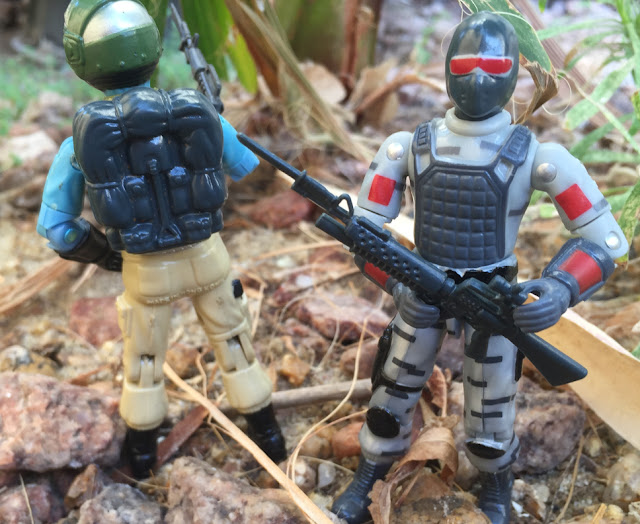 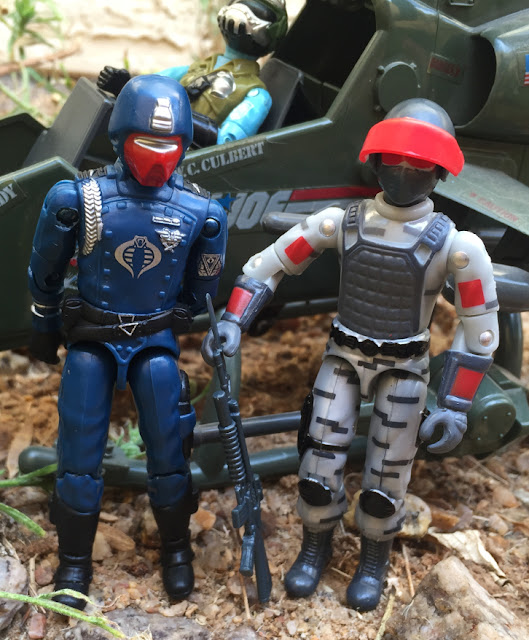 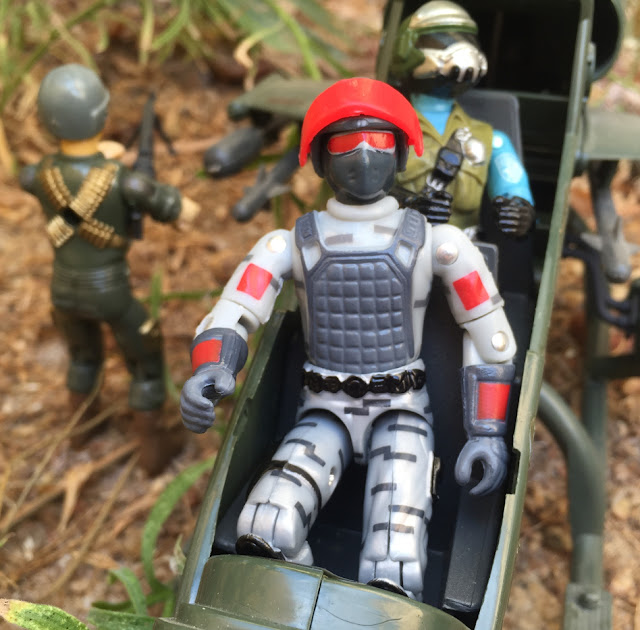