The character of Quick Kick never really appealed to me.  Despite first appearing in the classic 1985 series, I never found the figure all that interesting.  As such, through the years, I mostly ignored Quick Kick's existence.  I acquired a complete one in an early lot of figures I bought and never really thought much about him.  However, as I turned towards foreign Joes as the major growth area for my collection, I found that Quick Kick had a large contingent of international releases.  Again, though, I heavily avoided these: spending my time acquiring figures I liked more instead.  In time, though, I realized that I would "need" to get the Quick Kick variants at some point.  So, when I found a dealer selling several Plastirama figures I was missing from my collection: I went ahead and added the Argentine version of Quick Kick (named Sigilo) to my collection.

Quick Kick was never really important to my childhood collection.  There's a few reasons for that.  The first is that his look was just too far out there.  A guy with bare feet and bare chest was tough for me to really get behind.  The second was that he only included a sword and nunchuks as weapons.  Had he been released in 1984 as an enemy to Storm Shadow, I might have found Quick Kick more interesting.  But, with the 1985 Snake Eyes as Storm Shadow's foil available the same calendar year, Quick Kick never stood a chance.  The final reason is more trivial.  But, one of my friends simply loved Quick Kick.  He was annoyingly attached to the figure.  (I suspect it was because he could not find the 1985 Snake Eyes at retail.  So, he didn't have Storm Shadow's natural enemy.  I recall him ordering Snake Eyes from either Sears or JC Penny's: getting several figures he already had since he couldn't find the figure he wanted at retail.)  He had Quick Kick out duel Snake Eyes.  This, to me, was ludicrous.  And, it helped sully the Quick Kick figure for me.

Yet, I did find uses for Quick Kick.  One of my favorite Special Missions adventures centers around Quick Kick and Stalker being trapped by South American terrorists.  From stories like this, I found that Quick Kick could have some value.  Yet, I found the figure constraining.  So, in time, Quick Kick joined the legion of nameless, faceless minions who would represent enemies of both Joe and Cobra.  He might be a radicalized student, a dissident or just a general terrorist.  He was joined by my broken figures, Dreadnoks and other knock offs in this role.  He also served as a stand in for Viet Cong soldiers during the time I was obsessed with "The 'Nam" comic book.

Beyond that, though, the figure never found a place.  Even as an adult, Quick Kick hasn't grabbed my attention.  I have few photos of him on the site and he rarely even makes a background appearance.  If I'm rattling off the 1985 lineup, Quick Kick will be the one figure I forget: even over the obscure Listen & Fun Tripwire.  The bare chest and feet don't really lend themselves to much usage.  And, Quick Kick's lack or firearm further limits his value.

The main differences between this figure and the American release are subtle.  Sigilo's (the name means Stealth) skin tone is definitively pinker than Quick Kick's.  That's the most noticeable difference.  He has a red belt with silver pockets.  These work better than the American colors and are more unifying in appearance since they also tie with the silver wrist gauntlets.  If you come across a loose Sigilo in the wild, he's different enough that an experienced collector will instantly recognize him as being different from the American figure.  But, he's still similar enough that he doesn't really bring anything to the Quick Kick character that you don't get from the Hasbro version.

Sigilo's accessories are the same as Quick Kick's.  The Plastirama backpack is a shiny black color.  (It's the common color of many Argentine accessories.)  The sword and nunchuks are still silver and are functionally indistinguishable from the Hasbro versions of the same gear.  Quality Control for these Plastirama figures can be spotty, though, and it's not uncommon to see carded Sigilo figures missing the nunchuks. The black pack is something different for the figure, but isn't really enough to be interesting.  But, at least the figure contains the full complement of gear.

Quick Kick was quite the world traveler.  Despite that, though, he never really got an interesting variant.  After his release in the U.S., Quick Kick appeared in Argentina and Brazil.  The Estrela release from Brazil is notable because Hasbro actually had Estrela produce a large quantity of Quick Kick figures that were made available to North American collectors via Hasbro Direct.  So, anyone who had a later mail away Quick Kick figure actually has the Brazilian variant.  Despite this major difference, these mail aways remain remarkably cheap.  Though, massive amounts of overstock were put into the collecting community that helps sate demand.  From Brazil, Quick Kick migrated to India.  There, Funskool produced a Quick Kick figure for many years.  Like both the Brazilian and Argentine versions of the mold, the Funskool figure is a very similar to the American release.  There are a few very difficult to find variants of the Funskool Quick Kick, the most famous being a version with a light pink sash.  It does not appear that Hasbro got the Quick Kick mold back from Funskool in the 2000's and it could still be there.  Frankly, I'd go for at least one variant of Quick Kick that gave us a substantially different visual from the other figures that were released around the world.  But, that's never going to happen, now.

In the early and mid 2000's, mint on carded Sigilo figures were ubiquitous on online auction and dealer sites.  They would sit, unsold for $10.  If you were patient, you could get them for half of that.  Sgto. Slaughter, Alado, Fuego and Sigilo comprised a quartet of completely undesirable figures that collectors ignored.  Slowly, though, the supply of all the Plastirama overstock has dried up.  These days, MOC Sigilos are around $25 figures.  Loose, they will run around $15 or so.  That's still pretty cheap.  But, there are tons of Quick Kick figures out there and most of them are similar enough that once you have one, you have them all.  But, you simply don't see Sigilo (or any of the once easy to find Plastirama figures) with the frequency you did just a decade ago.

If you are a foreign figure junkie like I am, this is good since you can still get a foreign variant for really cheap.  If you don't really care, it's good, too, since this Sigilo doesn't really offer anything you don't get with the regular Quick Kick version.  Since I'm still not a Quick Kick fan, this Sigilo just sits in a box with some other Plastirama figures.  He's fun to display with Sgto. Slaughter and Alado from time to time.  But, I rarely have occasion to pull him out and use him on his own merits.  Quick Kick is a character that's never resonated with me and the figure has kept him buried in my collection.  Having a foreign version of him is kind of fun.  But, in the end, this Sigilo is still constrained by the same issues as the American figure.  For those who like Quick Kick (and, he has a lot of fans) that's a good thing since it allows them more ways to collect a figure they enjoy.  For me, though, this figure checked a box and that's about the extent of his value to me. 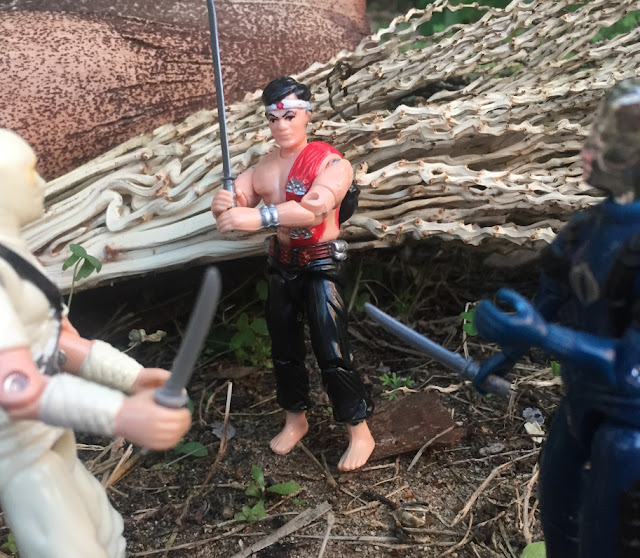 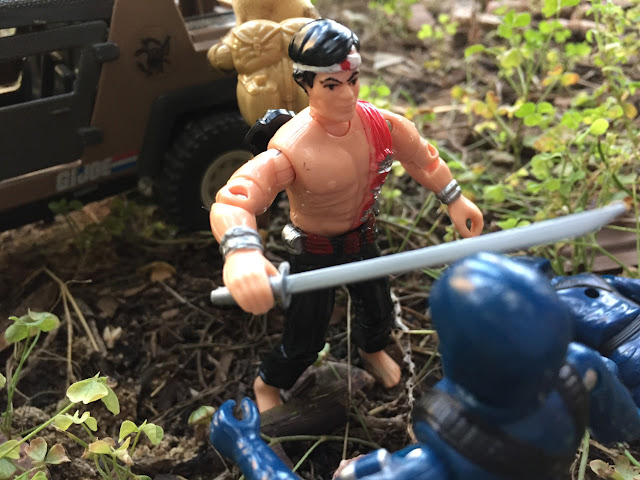 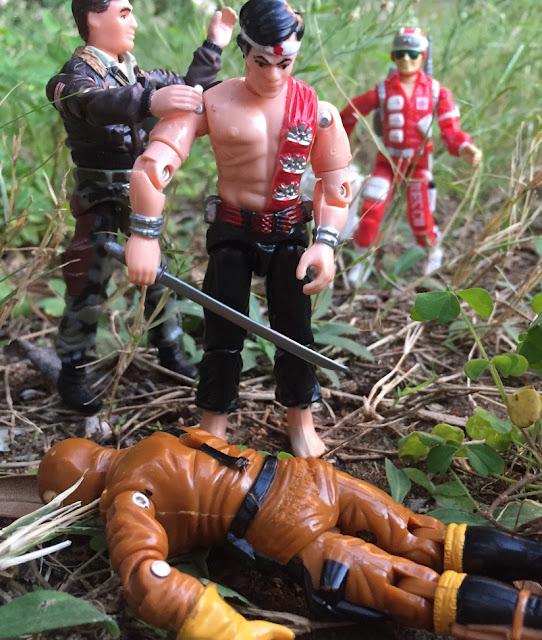 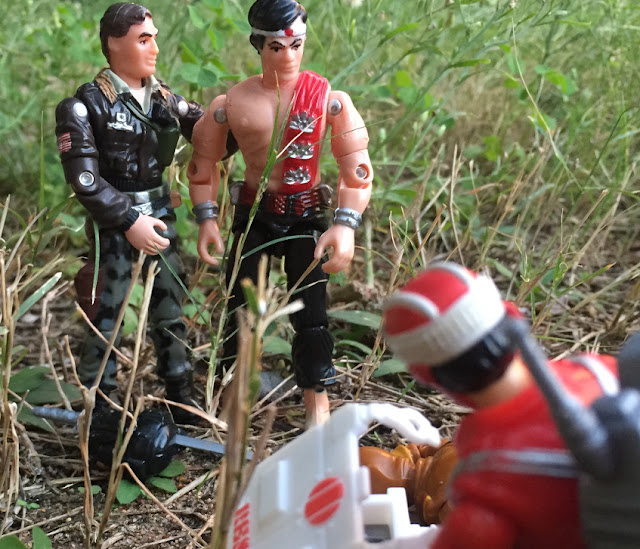