The Shadowtrak was affiliated with the collector favorite Red Shadows faction of the Action Force line.  And, while it was designed for use with the 5 points of articulation Palitoy figures, the similar 3 3/4" scale G.I. Joe figures also work with the toy perfectly well.  The vehicle is also cast in red and charcoal black: giving it a wonderfully vintage G.I. Joe feel.  While you can tell the Shadowtrak isn't a Hasbro release, a casual observer would definitely mistake the vehicle for something straight out of Cobra's earliest years. 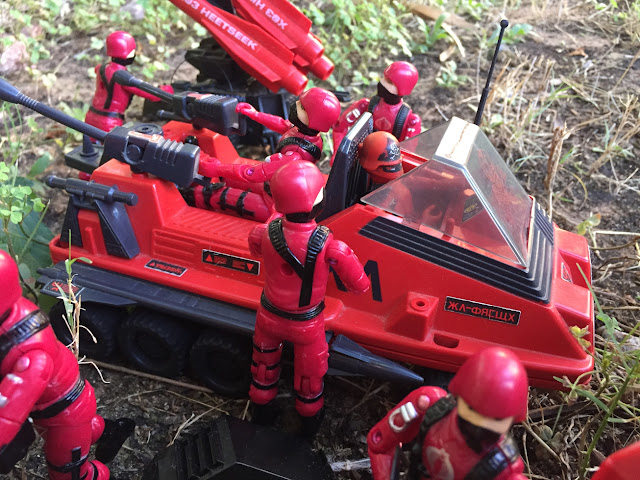 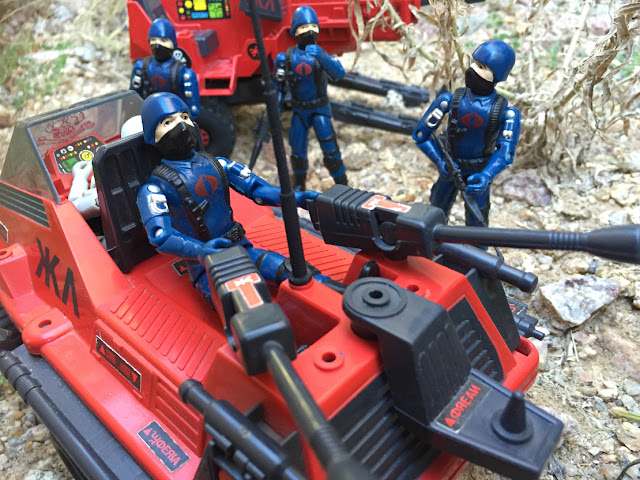 The Shadowtrak has about the same footprint as a Hiss Tank.  It is much lower in height, though.  And, despite the appearance of a lot of area for figures, the vehicle only actually holds two individuals: one in the driver's seat and one in the rear facing gunner's station.  For some reason, the driver's seat folds down to create a larger space in the vehicle.  But, since the driver is now precluded from sitting at the controls, the seat doesn't seem to serve much purpose beyond being one of those little nuances of a toy that make it appear to do more than it actually does.  You can put the driver in a prone position with the seat down, making the Shadowtrak work much like the 1987 G.I. Joe Low Crawl Vehicle. 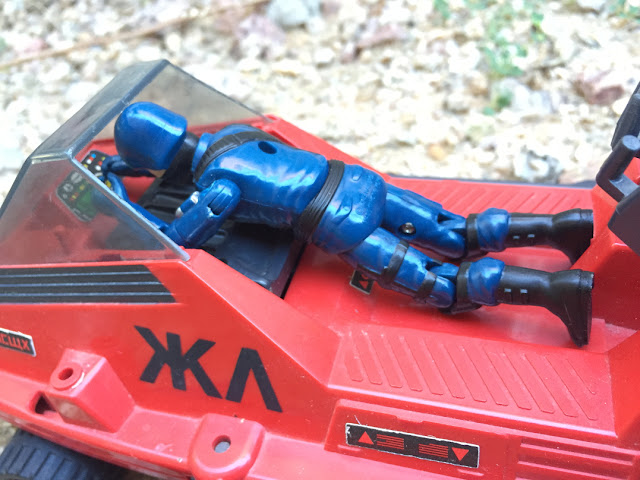 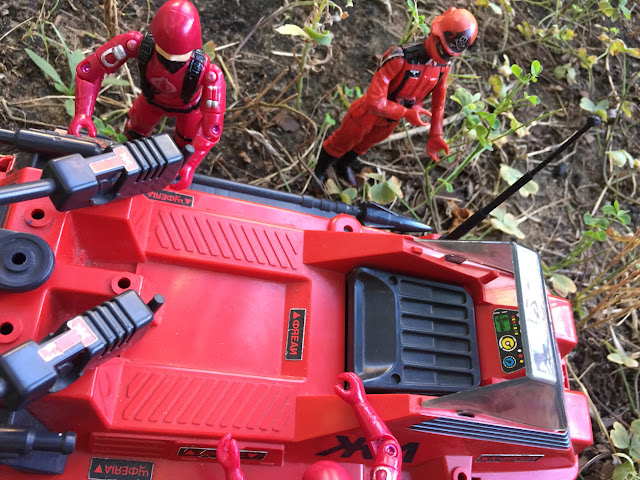 The Shadowtrak is well armed.  It includes 2 mounted machine guns.  They can be configured differently around the Shadowtrak's various post holes.  You have have them forward facing or as weapons for use by the rear facing gunner.  If you can find either reproduction machine guns or extra originals, you could easily double the armaments for the Shadowtrak.  It also features two small missile caps on the side mounted bars.  Just the tips are removable and they are somewhat small and can often be missing from Shadowtraks found in the wild.  There's also an antenna that fits into the posts and can be moved around to fit your tastes.

Among the parts included with the Shadowtrak is a removable tow hook.  The hook isn't the standard G.I. Joe hook introduced in 1982.  It is just a single spike.  The upside is that is more versatile than the Hasbro designed hook that was really engineered to only be compatible with other Joe toys.  The downside, though, is that it's not standard Joe height.  Neither an ASP nor the SMS can be affixed to the hook as it sits too high: which is a shame as they both are great companion pieces.  But, as neither design was given to the Red Shadows, you can see why the precision of the hook with all Joe vehicles may not have been as much of a concern.  The Laser Exterminator, though, does fit onto the hook.  So, this makes the two Red Shadows vehicles perfect companions for each other. 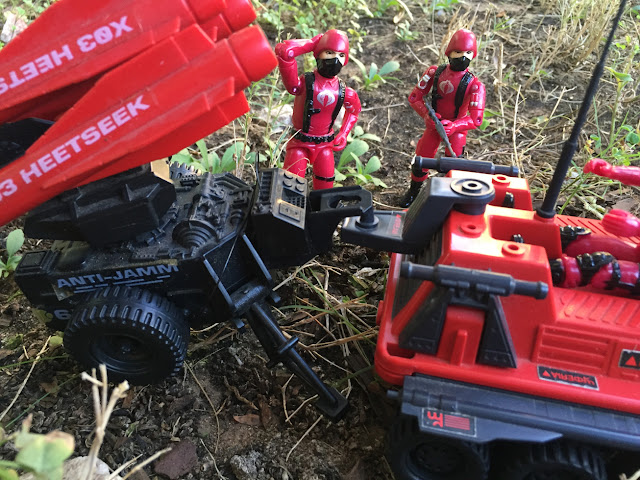 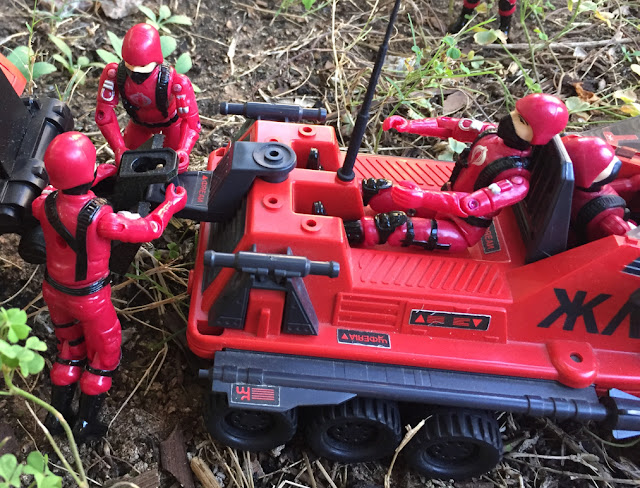 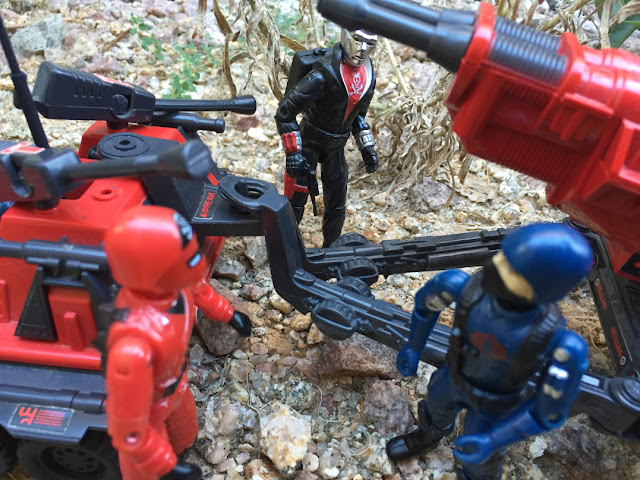 The Shadowtrak was first released by Palitoy in 1983.  That version was released in a window box.  Around 1984, the packaging was changed to a card box, more similar to G.I. Joe vehicles from the U.S.  The vehicle itself, though, is a modified release of the Action Force AF5 vehicle that first appeared around 1982.  This vehicle was a flying car that included a lot of snap on accessories.  The body was used again on the Cosmic Cruiser around the same time as the Shadowtrak was released.  The versatility of the mold is shown by these three releases.  You will note there are a lot of unused holes on the Shadowtrak.  On the surface, these allow for the owner to configure the guns and antenna in different combinations.  But, they also allowed for Palitoy to get more uses out of the base body mold without the toys appearing to be just straight repaints.  This is both a marvel of engineering and design as well as a genius way to get more out a single toy mold.  Hasbro really never took this approach.  To a causal observer, the AF5, Shadowtrak and Cosmic Cruiser would appear to be different toys.  But, the use of the removable parts helped to obscure the fact that the base body was used several times.

It also allows you to move the guns and antenna around and set the Shadowtrak into different configurations. I love vehicles with rear facing weapons as you never know when the bad guys will start chasing you.  But, it's also practical to have the weapons forward facing for attack positions.  With the Shadowtrak, you can move the guns around to your preferred setting depending upon the situation.  It's a neat little detail that gives the vehicle more flexibility without sacrificing too much aesthetic. 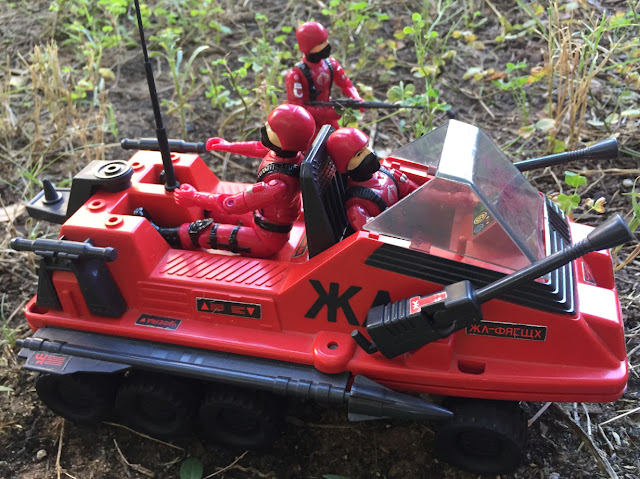 The Shadowtrak included a driver named Red Vulture. Red Vulture was a straight re-release of the single carded Red Shadow figure with a minor difference.  Red Vulture has black gloves painted on his hands.  It's easy to remember that the driver is wearing driving gloves.  There are instances where the vehicle included the standard Red Shadow figure, too.  Fortunately, the vehicle being designed for a 5 points of articulation figure doesn't preclude vintage Joes from fitting inside it just fine.

Shadowtraks are both easy and hard to find.  In the U.S., there are few people who sell them.  Those who do, want inordinate amounts for them.  You'll often see opened box samples offered for $100 or more.  They don't sell at that price.  However, if you can find sellers in Europe or, especially, the UK, the prices fall precipitously.  You'll often see mint and complete Shadowtraks in the $30 or so range from non U.S. sellers.  Unfortunately, many of them will not ship to the United States.  If you can find one who does, the shipping isn't terrible as the vehicle isn't overly large and is relatively lightweight.

While we don't know for sure what happened to the Action Force toy molds, it's a pretty safe bet that they no longer exist.  When Hasbro acquired Palitoy in the early '80's they shifted Action Force away from the Palitoy proprietary molds towards repainted Hasbro molds.  Then, the forfeited the repaints and just released American toys on Action Force cards.  These transitioned into differently logo-ed G.I. Joe cards and boxes and the Action Force roots slowly faded away.  It's doubtful that Hasbro had any incentive to save the Palitoy molds.  They could have sold them off or licensed them out like they did with G.I. Joe.  But, this would have likely cut into Joe's international revenue stream and there was little incentive for Hasbro to compete with its flagship toy line.  So, the molds have been MIA since these releases.  I'd have loved for a few of them to have popped up in the 2000's.  But, since Hasbro didn't know where most of its own molds were, it is unreasonable to think they had access to the old Palitoy offerings.

For me, the Shadowtrak is an excellent way to expand an early Cobra army.  You have seen mine outfitted with Crimson Cobra Troopers from factory custom Joe makers.  They are a perfect match for the look and feel of the Shadowtrak and allow me more flexibility when putting together a Cobra convoy using figures and vehicles from prior to 1985.  On top of that, the vehicle fits the Cobra aesthetic.  It's kind of odd and loaded down with lots of weapons that may or may not make sense.  But, that is Cobra to a "T".  The Shadowtrak is a nice addition for a Laser Exterminator and looks good among other Cobra vehicles.  It offers anti-infantry capabilities that were lacking on the Hiss Tank and Stinger.  And, the different configurations lend themselves to army building Shadowtraks without them all appearing the same.

The Shadowtrak has opened the door of Action Force vehicles to me.  There are a wide variety of Palitoy offerings (mostly on the good guy side, though) that look very cool and fill a niche that Joe could use.  The problem, of course, if that some of them are very hard to find in good condition and complete.  While this Shadowtrak can be affordable, many of the other Action Force exclusives are less so.  But, the additional value this item brings to my collection far exceeds it's monetary cost.  I'm not really sure how I went so long without a Shadowtrak: especially when you consider they were rather common from U.S. sellers in the early 2000's.  But, I have the Shadowtrak now and it's become a vital part of my collection. 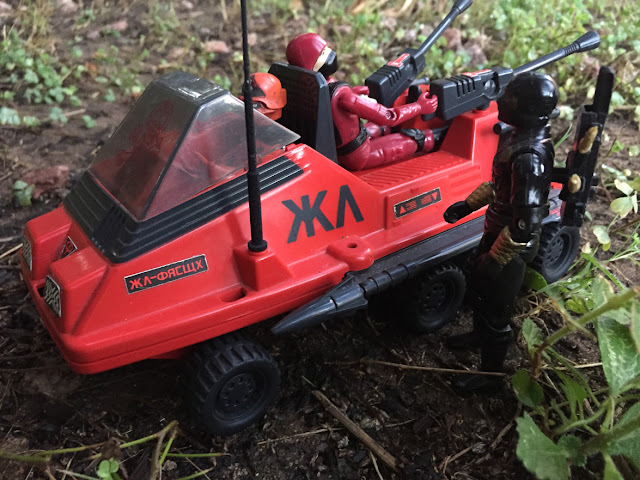 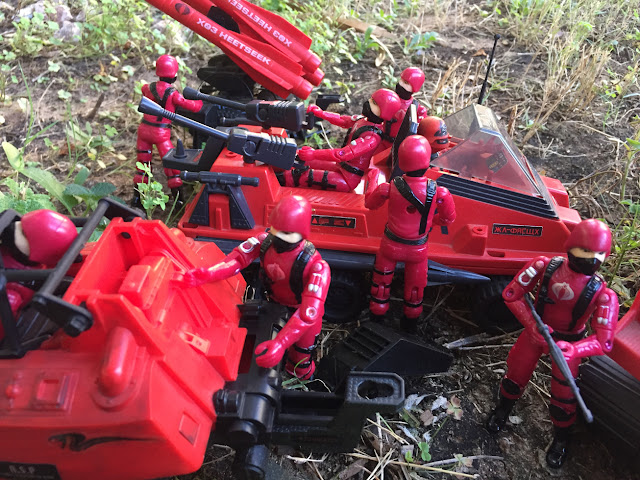 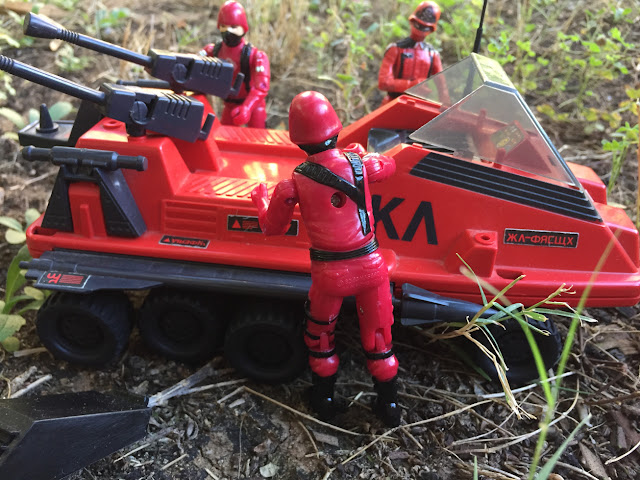