Time heals all wounds.  Or, so they say.  In 1991, Hasbro released the Eco Warriors figures.  As collectors came online a few years later in the late 1990's, they generally hated the concept of neon Joes and, in particular, hated the Eco Warriors for being the harbinger of the bright colors.  Well into the 2000's this opinion remained true.  But, as the calendar turned to the 2010's, the stance began to soften.  This was due to the fact that many hardliners (those who felt the Joe line ended after 1987, or even 1985) had either left the hobby or had decided the later vintage Joes weren't bad since they had nothing else new to collect.  But, it was also due to an influx of younger collectors for whom the neon years had defined their childhood Joe experience.  While I won't go so far as to say that Eco Warriors are now popular, they are accepted and collectors find some value in them.  In looking back at the molds used in the Eco Warriors subset, they still exhibit the same high quality sculpting and design that Hasbro retained through the vintage Joe line's entire run.  This brings us to Ozone: an excellent addition to the Eco Warriors ranks and the subject of today's profile.

Ozone is known to me as an Astronaut.  The first time I came across the figure was in the spring of 1995 when I found the 1993 Star Brigade version of Ozone, Countdown and Payload for $2 each at a KB Toy Liquidators on the West side of Indianapolis.  The mold looked like an astronaut and it seemed perfectly reasonable to me that the figure was new to the Star Brigade assortment.  As collecting resources came online, I found that Ozone actually debuted two years earlier as part of the Eco Warriors assortment.  As I liked my 1993 figure, I made it a point to find an original Ozone figure.

In the late 1990's, though, finding figures from the 1990's on the second hand market was actually kind of tough.  Not too many kids had gotten to the point of selling their figures.  So, it took a good amount of time before I found a lot that included a complete Ozone.  Once in hand, though, I found that I still got more use out of my later Ozone releases.  The blue and yellow color was visually appealing.  But, I was more interested in Clean Sweep as a new acquisition.  And, as I was familiar with Ozone from Star Brigade, I had difficulty in seeing the original release of him in the Eco Warriors light.  Plus, the figure I got was very stiff.  So, he was difficult to fit into the Razorblade (my aircraft of choice at the time) which limited his display use.

Ozone's design is very strong.  His distinctive visage is one of the highlight.  The figure itself is named after a Hasbro designer of the time named David Kunitz.  The helmet is tight fitting and well placed without being a true danger of rubbing off the head's paint.  The rest of the body is somewhat bulky: befitting for a figure who would be wearing lots of protective gear.  He has lots of armor bits around that add depth to the mold, but really can only be explained away as aesthetic choices.  Ozone features an array of 6 neon green grenades on his chest.  They provide a visual break to the blue and yellow background.  And, they are a nice complement to the neon green accessories.  The overall color scheme works well despite the non-traditional bright colors.  Sure, Ozone is blue.  But the hue would never be mistaken for Cobra.

Ozone's accessories are a mixed bag.  His helmet is awesome.  It fits well and is in scale with the rest of his body.  The water squirting backpack is, essentially, the same as the device included with the other Eco Warriors figures.  For the time, it's a solid toy.  But, the weapon and hose are large and can easily snap thumbs.  The sniffer is a cool device.  However, in my first Eco Warriors lot I acquired, the sniffer was placed into the bag with Clean Sweep.  I never bothered to look up each figure since all the figs in the lot had their correct accessories.  So, until 2016, I considered this piece of gear to belong to Clean Sweep.  I've always seen it as an extension of the nice pack and controls setup included with that character.  So, seeing this vacuum gun with Ozone still seems odd to me.  But, the quality and oddity of the weapon remains the same regardless of which figure you have use it.  The bright green is a nice offset from the subtle blue and yellow of the figure.  So, I find it very aesthetically pleasing: even if it is very bright.

The Ozone mold got a lot of life.  Hasbro created it for the Eco Warriors in 1991.  It was then released in two variants as part of Star Brigade in 1993: a tan and a brown version.  Hasbro recolored Ozone into a dark brown and included him as a shortpacked figure in the second series of 1994 Star Brigade figures.  The mold then appeared in India around 1999 or 2000.  There, Funskool released a Star Brigade Ozone based on the 1993 American release of the figure.  There are a few variants of the Funskool figure to track down as some have different arm construction or differing shades of grey coloring.  Funskool still had the mold in 2010.  As such, it's more possible that Ozone's mold still exists.  Though, it's doubtful that he'll ever appear again.

Mint and complete with filecard Ozone figures are cheap.  While dealers sell them for $10, you can get them with the filecard for around $6 without too much difficulty.  You can still get carded figures in the $25 range without too much searching, too.  So, while the figure isn't as hated as it once was, it's still not loved by collectors.  However, for the price, Ozone isn't a bad buy.  The colors are different and vibrant.  The mold is solid.  And, the character is a relative blank slate that can be incorporated into any collection with no media baggage.  You can use the figure in a variety of settings and the panoply of later colors allow for some diversity when using the character.  Personally, I don't mind either Eco Warriors or brightly colored Joes.  I've been this way for 20 years, now.  But, the nostalgia of the neon years is strong with me as it was when I actively became a collector.  So, the value you derive from an Ozone figure may differ quite a bit.  But, I'm glad to have this guy in my collection. 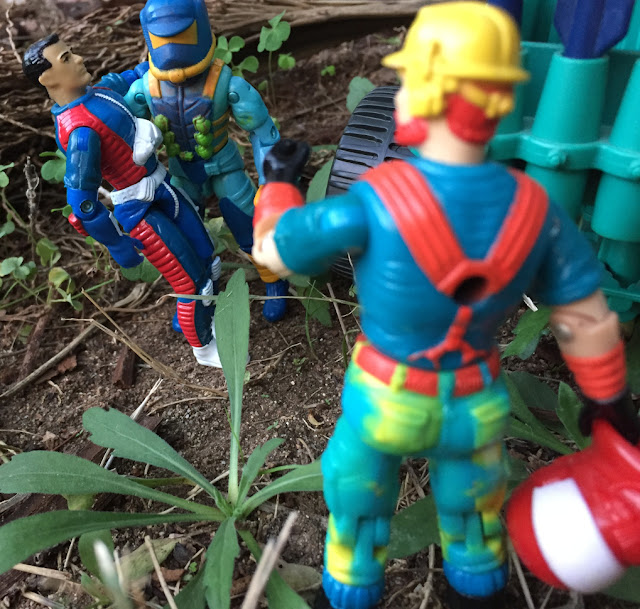 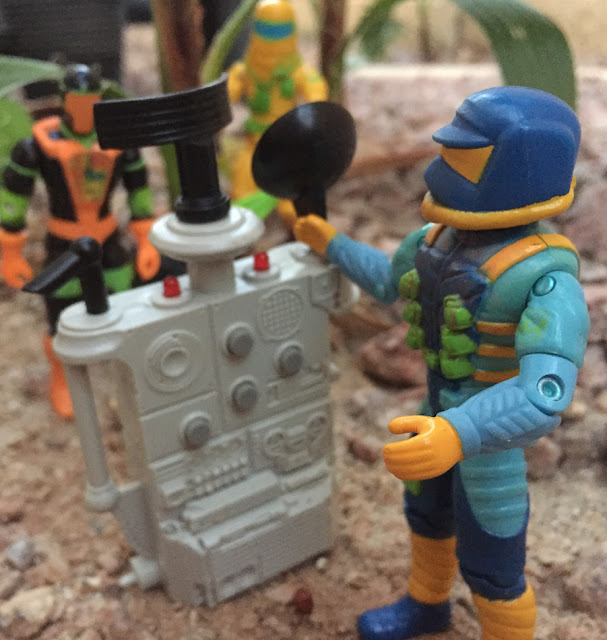 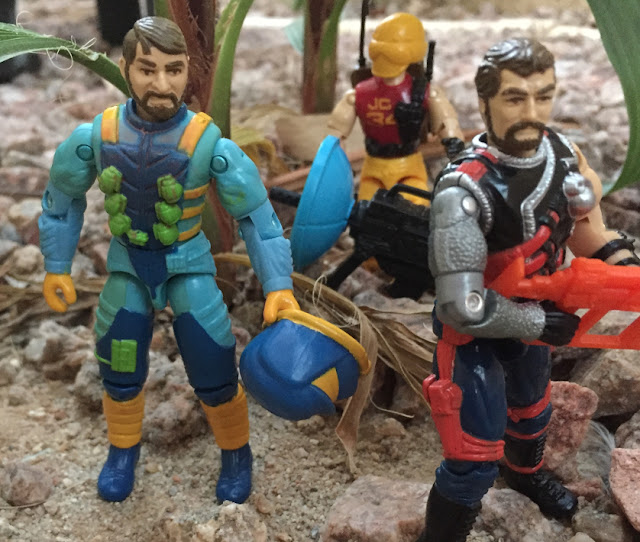 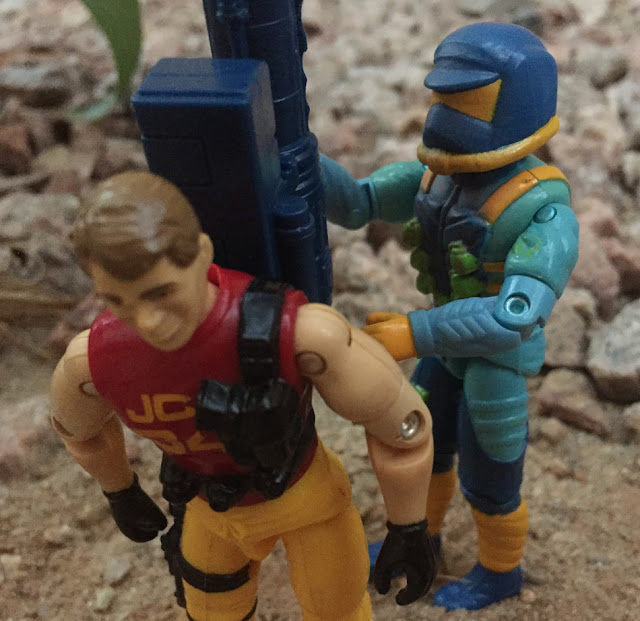 Posted by Robot_Sonic at 3:37 AM
Email ThisBlogThis!Share to TwitterShare to FacebookShare to Pinterest
Labels: 1991, Eco Warriors, Ozone