The early years of the Joe line were nothing but hit after hit.  With each subsequent year, the inventory of great toys increased.  As a kid during this time, there were basically no toys I didn't want when I looked at the catalogs.  In retrospect, there were a couple of items that aren't great.  The MOBAT never clicked with me as it was big and only held one figure.  The gliders weren't any fun because they didn't really work and they fell apart with the first crash.  In 1984, though, I was introduced to the first real disappointment in the Joe line: the SHARC.  From the catalog photos, the SHARC looked pretty strong.  In hand, though, it was a series of disappointments.  Biggest of all, though, was the included figure: Deep Six.

I started buying G.I. Joe comics in the summer of 1984.  My first three issues were numbers 27 through 29.  One of the main characters in those issues was Deep Six.  He was wearing a very different outfit from his figure.  But, I thought he looked cool and the character was interesting.  When my youngest brother got the SHARC one summer day, I was excited from seeing both its and Deep Six's appearance in the comics.  Upon holding the toy, though, the limitations became immediately clear.  First and foremost among those was the Deep Six figure.  Gone was the articulation that made the Joe line.  Deep Six was a bulky 5 points of articulation figure who couldn't hold any accessories.  Everything that made the Joe line the toys of choice was absent on Deep Six.

That isn't to say, though, that the figure is without merit.  He fits perfectly into the SHARC.  Unfortunately, though, this makes the SHARC suck more than it makes Deep Six a cool figure.  But, for a guy who would be a true deep sea diver, this bulky suit and helmet kind of work.  Given the limitations of figure sculpting in 1984, the figure is a passable job.  The 1989 Deep Six figure showcases how Joe sculpting improved over the years, though it's not a 100% recreation of this figure.  The basic elements of the figure, including the clear bubble are kind of fun.  I recall a couple of times when Deep Six would get, well, deep-sixed, when he was on a mission deep underwater and his suit would fail.  But, those were few and far between.

When I was a kid, I wasn't much of a customizer.  However, I did frankenstein many of my broken or worn out figures into new characters.  The issue with this, though, was that I often ended up with two figures who had the same head: the correct Hasbro figure and the new custom I made out of an old version of that figure.  Many, many times I looked at the Deep Six head and thought it would be a great way to create a new character.  Several times, I stuck a screw driver into the seams on the figure's body and began to pry him apart.  Each time, though, I chickened out.  I didn't want to break the Deep Six figure, even if I had no use for him.  So, the head sat, unused, until the figure was put away.

I had such contempt for Deep Six that I didn't actually consider him a figure.  While I packed all my figures away so they would be preserved, Deep Six wasn't given such consideration.  Instead, he was dumped into a shallow box full of broken and mismatched vehicle parts.  Here, he sat in my parents' attic for over a decade.  When I dug him out, he was covered in shingle dust from a roof replacement.  He was dropped back into the box and left there.  Even as I became a collector, Deep Six was neglected.  I didn't even put him in the 1984 drawer.  He was kept with spare parts.  Today, he's at least moved up to join the other 1984 figures in their storage container.  But, that's about the end of him.  This profile is the first, and likely last, time I've photographed the figure.

To this day, I despise the SHARC.  I wanted it to be so cool and fill the gap of both airplane and submarine that needed to battle the Water Moccasin and the FANG.  But, it was so disappointing that I consider it an utter failure to this day.  Not everyone agrees and there are collectors who quite enjoy the SHARC.  But, I don't and this Deep Six is a big reason why.  I would have loved Hasbro to have given us a decent land based Deep Six using the Topside body as a base.  Then, I could have enjoyed the character from my first comics.  But, instead, this figure is just a lump of plastic that inhabits space in my collecting room.  When I look at him now, I don't see a reason for the contempt with which I hold this figure.  But, grudges from childhood die hard and this Deep Six is one that I'm still disappointed with.

Deep Six was actually used more than once.  The figure was released in Brazil, Venezuela and Argentina.  All the foreign releases are nearly identical to the American figure with just slight color variations.  And, all were released with their respective foreign variants of the SHARC.  In the early 2000's, there were a ton of Plastirama Deep Six figures that were available from American dealers: often for just a couple of bucks.  Like the rest of the once common Argentina overstock, though, those figures have largely dried up.  I would have loved to have seen Deep Six's head reused on another Joe figure at some point in the line.  (He would have been a better choice for the Starduster head.)  But, that never happened. And, the fewer uses of this mold, the better.

There is a question as to what makes up a complete Deep Six figure.  Do you consider the bellows and hose to be part of the SHARC or part of the figure?  In the end, though, this is largely irrelevant as the parts in question are easy to find in either regard.  You can get Deep Six figures with the bellows for around $8.  You can get Deep Six figures with no gear, but still on the bubble for about the same price.  If you just want the figure, they drop to $5 and below.  In short, the figure is cheap.  But, outside of having him for completeness, there's really not other reason to own the figure.  The articulation is poor and he is completely useless outside of his vehicle.  Fortunately, Hasbro didn't really tread into driver/vehicle fusion like this again.  And, one misstep in the early days isn't too bad of a track record. 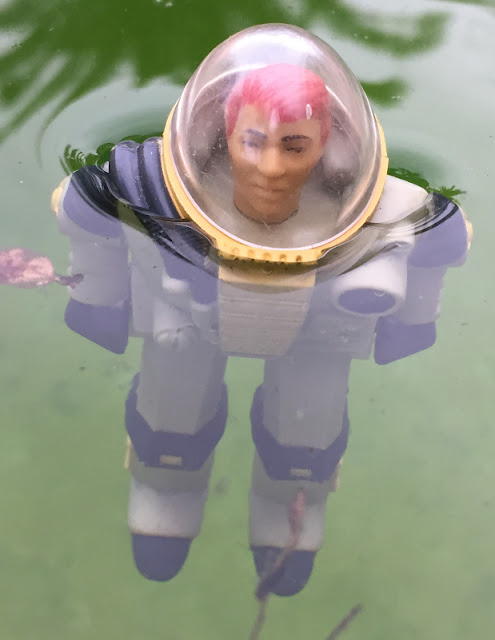 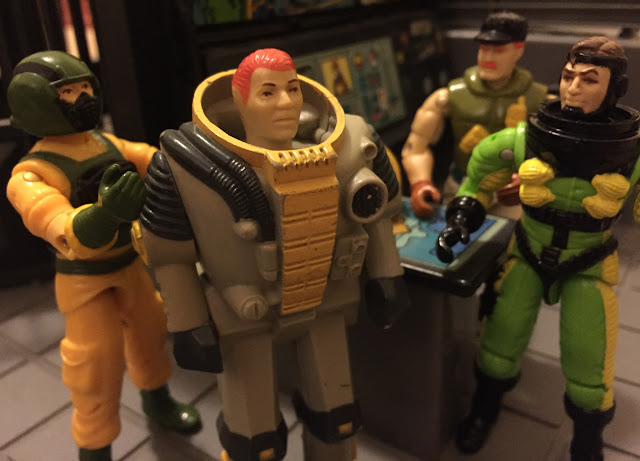 Posted by Robot_Sonic at 1:00 AM
Email ThisBlogThis!Share to TwitterShare to FacebookShare to Pinterest
Labels: 1984, Deep Six, Vehicle Drivers