Rogue One Shoretrooper - The Black Series

Since 1995, I have collected Star Wars figures in an on again, off again fashion.  Through that time, though, I've usually kept one eye on the collecting world, even if I wasn't actively buying the figures.  One theme that's run through the years is that if Hasbro makes something, they usually make a lot of it.  Hasbro isn't in business to spend their resources on small production runs.  So, even if circumstances dictate that a particular release gets backed up at retail or can't get out in significant numbers, Hasbro has, likely, produced the full production run of that item.  The result is that, in time, the items will filter out.  Though, they may be through deeply discounted clearance sales, online only offerings or, the more common route in recent years, through the overstock and discount retail store pipeline.  The result is that, if you have the patience, just about everything Star Wars will show up at retail somewhere.

There were two new flavors of Stormtrooper introduced in Rogue One: this Shoretrooper and the Death Trooper.  Everything I've known about toys for the past 20 years pointed me in the direction that the Death Trooper would be the overwhelming collector favorite.  There had not been a ton of black Stormtrooper figures through the years.  The Death Trooper had the cooler name and higher profile in the movie.  And, typically, environmentally themed figures are less popular than those that can be used in multiple settings.  But, I turned out to be spectacularly wrong.  The Shoretrooper took on the greater collecting life and every instance of the Shoretrooper that saw mass retail release was more popular than the Death Troopers.  I asked some fans why they felt this was the case.  And, the answer generally seemed to be that Star Wars hadn't seen any desert themed figures before.  (The oddly popular Sandtroopers were just Stormtroopers with more gear.)  So, they were "new" to the world while the Death Troopers were something fans had seen before.  (Hell, even I had an all black Stormtrooper from circa 2008.)  So, the Shoretroopers resonated more and found more popularity.  How this will play 10 years from now, though, is anyone's guess.

In 2016, Rogue One rekindled my interest in Star Wars.  Despite the figures mostly being 5 points of articulation, I found many of them good enough.  So, I started buying a few: mostly the characters I really liked.  The late spring of 2017 brought about a great many clearance sales on Star Wars figures.  During that time, I was able to get many of the more highly priced 3.75 Black Series figures since they were at a price I found more palatable.  But, I also picked up a few more of the 5 points of articulation figures that were 1/2 price.  Among these were both a Deathtrooper and a Shoretrooper.  After owning the Black Series Deathtrooper, the 5 POA figure was pretty dismal.  But, since I didn't have another Shoretrooper option, the 5 POA didn't bother me as much with that release.  I found the design more interesting than I originally thought I would.  This, of course, lead to great frustration as I knew that Hasbro had produced a 3.75 Shoretrooper in super articulated form.  I simply couldn't find one.  I found remnants of his case several times: but the army builders were all cleared out by other collectors.  So, I resigned myself to simply never getting this figure.

The initial shipments of the Shoretrooper wave sold out quickly.  While serious collectors were able to find them and buy them up, the more casual fan (a group I consider myself in these days) would only find them with incredible luck.  As the calendar turned to 2017, the shipments of the figures seemed to dry up and boxed Shoretroopers became $30 figures on the secondary market.  In the spring, though, Wal Mart reduced the price of Black Series figures to almost 60% off the previous retail.  This caused some serious sell down of stock as the Black Series figures were now lower priced than the basic carded figures.  (Though, to be fair, at my 2 local Wal Marts, they had only a smattering of Jyn Erso and Princess Leia figures available.)  It also, though, pushed most of the remaining stock through the distribution chain.  Collectors reported finding cases and cases of the Shoretrooper wave for the discounted prices.  While my nearest Wal Mart never got any more stock, I missed the Shoretroopers by one day at the second that's closer to work.  I searched in vain, but never found the missing figure.  Despite the mass quantities of Shoretroopers showing up around the country for under $6 each, the aftermarket pricing didn't soften all that much.  So, I gave up owning this figure and moved on.

In November of 2017, though, I saw scattered reports that people were still finding the occasional new case of Shoretroopers at various Wal Marts.  I didn't think much of it, though, as I didn't really have the desire to look very hard and my local Wal Mart hasn't had any new Black Series figures since December of 2016.  The Sunday before Thanksgiving of 2017, though, I ran out to pick up a few gifts for the boys that were in stock at the store near my office.  It was later in the evening.  I had a feeling that I might find a Shoretrooper because the circumstances of my being at the store were odd.  Sure enough, when I went to the toy aisle, there was a lone Shoretrooper hanging from the peg.  After nearly a year of searching, I had the last piece of my Rogue One collection and I had found it at retail.

As for the figure, it's fairly solid.  I hold the 3.75 Black Series Death Trooper in extremely high regard.  I consider it one of the finest Star Wars figures ever made.  This Shoretrooper is close, but not quite that quality.  While he has all the joints you need, he is a bit stiffer in some places and more wobbly in others.  He's better than many of the super articulated figures I acquired in 2008 and 2009.  But, he's not quite Death Trooper level.  His gear was also somewhat of a disappointment.  He just includes the one blaster.  The 5 POA Shoretrooper figures include the new blaster that was introduced in Rogue One.  It would have made sense to include one of those weapons with this figure, too.  But, at least some of the 5 POA figures are clearance fodder and you can buy them up for an extra gun.

Overall, I'm somewhat torn on the character.  To me, any Stormtrooper not in the standard white armor seems like a relic from the Clone Wars era.  I hold many of the Prequel Clones in high regard.  But, they are not really iconic to me.  I see this Shoretrooper similarly.  He's neat.  But, he's never going to be the backbone of an Imperial army.  So, I have one with little desire to acquire any more.  It doesn't mean he's a bad figure or a weak design.  I just grew up with the standard Stormtroopers and see deviations from their base white and black color scheme as one off type figures.

I don't know how to play out a long term prognostication for this figure.  Currently, the figure is still over $20 on the aftermarket.  Rogue One is fading from memory and its doubtful that the Rogue One timeline will be revisited by Disney again at any point in the near future.  So, it's likely that the Shoretrooper's moment in the limelight has passed.  But, collectors are a loyal bunch and many original trilogy fans hold Rogue One in high regard: keeping the characters from the story more popular than they might otherwise be.  Most collectors assumed the Shoretrooper would be among the first figures re-released on Vintage packaging in 2018.  But, it seems the Death Trooper will get that honor.  And, with the generally lame lineup of the next vintage waves coupled with Disney's movie release schedule, it looks like the Shoretrooper could have a tough time finding a release slot.  And, even if he is re-released, it's an easy figure to recolor into one of the ranked troopers: leaving this release as a distinct figure variant.  Or, he'll get dumped into a clearance wave and pegwarm for a year at discount stores.  With the modern Star Wars line, you never know.

Around the same time that I found this Shoretrooper, I also acquired the 3.75 Black Series Sandtrooper figure.  I've vacillated on the Sandtrooper over the years.  In the '90's, he was a must have new figure.  But, by the late 2000's, the character was overexposed.  And, he continues to be so.  (Supposedly, the Sandtrooper is a personal favorite of a high ranking Hasbro executive which is why we see the Sandtrooper more frequently than the standard Stormtrooper.)  But, when you can buy a super articulated Star Wars army builder for 1/3 of retail, you do so.  The proximity of the acquisitions lead to both the Sandtrooper and Shoretrooper lying next to each on the floor.  It was then that I realized that the two figures were, basically, the same color.  The Sandtrooper's dirty overspray made him nearly an identical tan color to the Shoretrooper.  (You can see them in photos below.)  Oddly, this made me more fond of the Shoretrooper figure.

As an aside, I had planned this profile for a December 15th, 2017 posting date.  The expectation was that I'd see "The Last Jedi" the night before and have this up as a celebration the following day.  I have fond memories of seeing Rogue One at the same time in 2016.  But, I then read "The Last Jedi" spoilers.  With those, any interest I had in seeing the film died.  And, with it, most of my interest in Star Wars as a concept was sapped, too.  I won't speak to the merits of the film as I haven't seen it.  But, there is one plot point that I simply had no need to see.  I get it that characters get old and that we need new characters, younger characters, to replace them.  But, when the only way to make a new character valid is by killing off the old character, the new character probably isn't all that worthwhile.

My childhood was defined by the heroes I saw in Star Wars.  I have enough reminders that I'm getting older.  Seeing those childhood giants needlessly die for some obtuse "closure" doesn't work for me.  But, knowing that the characters with whom I spent copious amounts of time in my formative years are now gone from the story I love leaves me little interest in following the story any more.  Star Wars is now for younger generations.  Maybe my kids will like it as more than a novelty.  But, even with the property's marketing saturation, I only have one child who has any interest in the franchise: and it's rather fleeting.  We'll see where I'm at in a few months.  But, with Hasbro's inability to create products that excite collectors and knowing the films are no longer for me, I'm not overly optimistic that my Rogue One collecting Renaissance will ever be repeated. 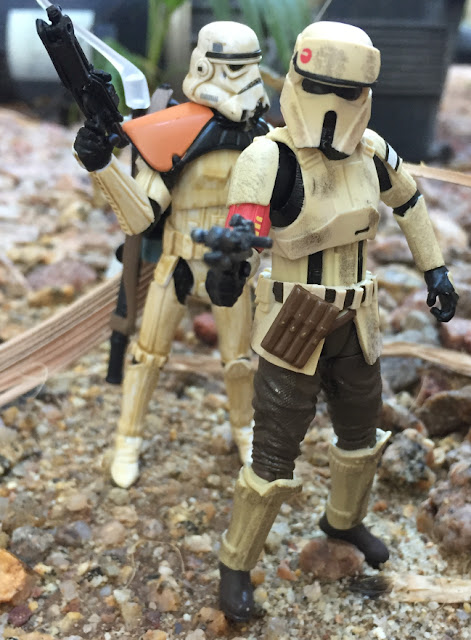 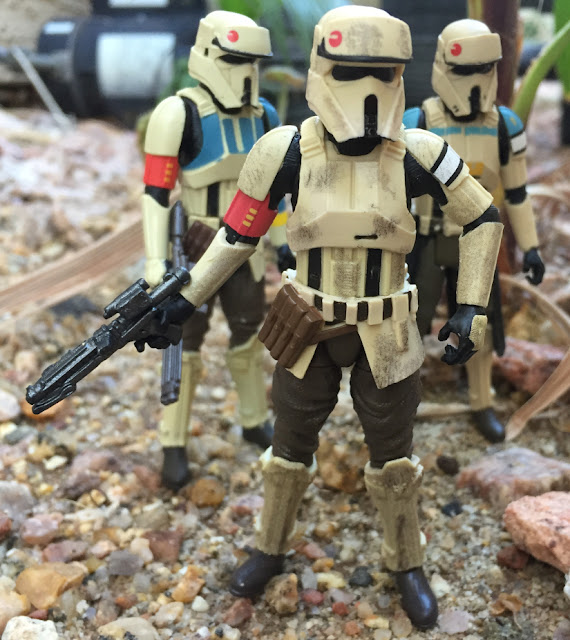 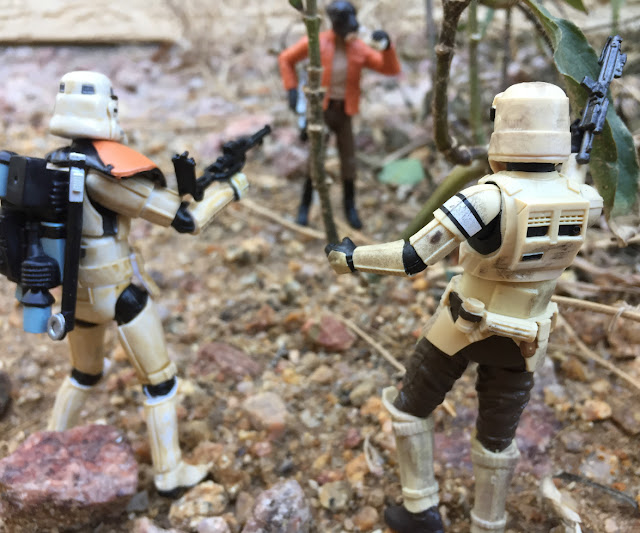 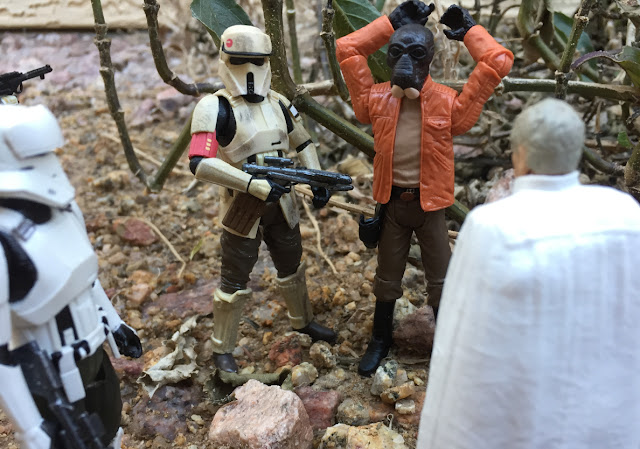 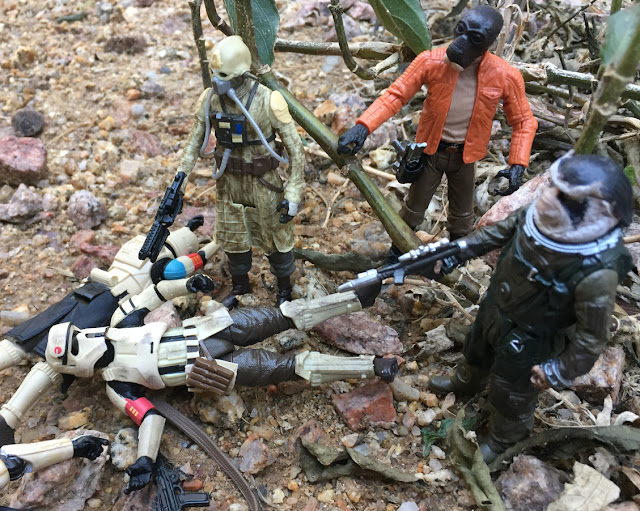 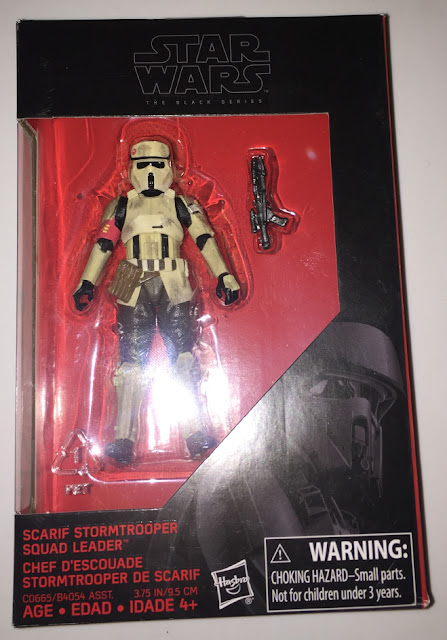 Posted by Robot_Sonic at 1:08 AM
Email ThisBlogThis!Share to TwitterShare to FacebookShare to Pinterest
Labels: 2016, Shoretrooper, Star Wars, Stormtrooper