As Joe slowly disappeared from retail in the mid 1990's, I scoured every retail store I could find in an attempt to build my collection as much as I could before the figures disappeared forever.  As money was limited, so were my purchases.  In the early days, I was more choosy and would only buy the figures that most fit with my vintage collection.  Then, as those disappeared, I picked up figures who were poorly colored, but had good gear.  Once those were gone, I pretty much bought every figure I could find since it was rare to find more than two or three figures at any given store.  There were a few figures, though, where I bent the rules.  In most cases, it was simply due to the fact that the character was one from my childhood and that was enough for me to consider the new figure: even if the coloring was, shall we say, poor.  This leads to the 1993 Dr. Mindbender figure.  A yellow and purple nightmare mish-mash of color with eye-burning yellow accessories was not the type of figure I'd usually buy.  But, I was always fond of Dr. Mindbender as a character.  So, seeing a new version of him on retail shelves brought a nostalgic wave strong enough to overcome the coloring limitations.  So, this Dr. Mindbender became one of the earliest figures to get added to my small collection of retail Joes.

I'd love to sing the praises of this Mindbender mold.  And, it is extremely well detailed and shows a remarkable advance in sculpting over figures released earlier in the line.  But, truthfully, this mold is kind of bad.  Through the years, I've seen a great many customizers take a crack at this mold in an attempt to redeem it.  But, most of the solid paint jobs only accentuate the fact that this mold has severe limitations.  It's big, bulky and makes Mindbender look like an aging body builder.  The head looks like Mindbender.  But, it could have been used for another Cobra character and no one would have really associated it with Mindbender.

Dr. Mindbender's gear is atrocious.  His weapons are all bright yellow and completely useless.  But, taking the color out of it, you are still left with an assortment of accessories that is fairly lame.  While Mindbender got 5 guns and a knife, the choices for him are poor.  He includes versions of the weapon originally included with Dee Jay and the gun from Voltar: both among the poorer weapon sculpts in the line.  He get's the 1991 Sci Fi rifle.  But, no hose to connect to it's peg.  When I found weapons like this on in 1993 and 1994 figures, I was left to wonder why the peg was there.  I wasn't familiar with any weapons past 1988.  So, I wasn't sure if the weapon was taken from another figure with a pack that attached, or if the figure I was buying at retail was supposed to include a pack and hose that were omitted for cost cutting reasons.  He includes a yellow pistol modeled after that from the 1988 Iron Grenadier.  But, the handle is much thicker and it's difficult for him to hold.  The otherwise awesome 1989 Snake Eyes Uzi is the same.  It has the thick handle and bad coloring.  I did like the zigzap knife from the 1988 Hydro Viper.  But, preferred the red version that came with the 1994 Viper.  Plus, he has the crappy spring loaded launcher that was ubiquitous in 1993.  Really, there's no reason to track down the figure's gear at all unless you're a completist.

For me, this figure was never Dr. Mindbender.  In the summer of 1994, I sketched out the future of my take on Cobra on a set of index cards while minding the office of a real estate company.  These characters all needed figures.  And, the new takes on classic Cobras that came out between 1992 and 1994 filled many of these slots I needed for these custom characters.  As such, I have a fondness for these neon monstrosities that extends beyond visual appeal.  To me, they are intricately intertwined to my entire Joe mythos.  This Mindbender was not the classic Dr.  Instead, he was a new, technologically savvy villain who aided my younger Cobras achieve incredible success in South America.  These characters represented the idealism of my youth when I still thought anything was possible and that a new generation could make a real difference in the world.  I was smart enough to equip these young turks with a grizzled mentor who aided and guided them in their military and political careers.  But, his death left them on their own where they were able to take Cobra to unprecedented highs.

This Dr. Mindbender mold is mostly chastised for the fact that it uses the 1986 Viper legs.  Starting in 1997, the Cobra Viper repaints were all missing the original legs because they were separated from the Viper mold and added to this Dr. Mindbender.  When Hasbro went to reform the Viper, they could not find the legs and the V1 Bat legs were substituted: to the angst of collectors for the next decade.  Hasbro claimed the legs were lost before finally resculpting parts of them.  Personally, I never got the issues with the BAT legs on Viper repaints.  I still found the 1998 Cobra Trooper one of the best figures Hasbro ever released.  But, this Dr. Mindbender was cursed a million times in the 2000's by collectors who lamented the loss of the legs from the prized Viper mold.

This entire Dr. Mindbender was sent down to Brazil where he was released in colors nearly identical to this American figure.  The Brazilian Dr. Mindbender is noteworthy for the fact that he includes near identical weapons to the European Tiger Force Blizzard figure.  In the early 2000's, the Estrela Dr. Mindbender was very easy and cheap to find MOC: far moreso than the Tiger Force Blizzard.  There was a fear that the Estrela gear and the Euro gear would get switched to make complete figures.  You can tell the difference in materials between the two by simple touch and sound, though.  The mold disappeared after the Brazilian release.  While Hasbro claimed those molds were lost, some of Dr. Mindbender's contemporaries appeared in Hasbro releases in the 2000's.  So, it's likely they had access to the mold and could have brought a vintage Dr. Mindbender mold to the repaint era.  But, Hasbro was too lazy to undertake a project like that and Dr. Mindbender remains the most important Cobra named character that Hasbro never revisited.

As a character, Dr. Mindbender showed some remarkable consistency.  The original figure featured a monocle over his right eye.  This figure has the cybernetic enhancements over the right eye.  The figure's filecard specifically mentions these enhancements as something Mindbender had done.  The planned 1995 Dr. Mindbender, though, had these mechanical bits removed with the scars to match.  It was an amazing little detail that showed the designers love for the line.  No kid would have cared about matching scars for a character.  But, there they were on the unreleased Battle Corps Rangers figure.  I wish that attention to detail had continued with the post vintage Joe releases.  But, it was lost when the original Joe team was scattered to the wind.

This figure is pretty much worthless.  You see lots of dealer sales in the $8 range.  But, that's heavily a function of few loose mint and complete figures being available.  You can get a carded figure for around $10 without much trouble.  Most 1993 figures remain easier to find MOC than they are loose, mint and complete with filecard.  If you can find a loose one, it will run you in the $6 range with just loose figures, sans accessories, selling for as little as a buck or two.  So, there's no reason to not get a version of the figure and really no reason to not pick up a second one in an attempt to customize the mold.  If you just want one representation of the Dr. Mindbender character, though, go with the 1986 figure.  Were it not for the nostalgic pull of this figure, I'd probably hate him.  There's not a lot of redemption available to the mold.  But, he is a rare second take on the Mindbender character.  And, it's always better to have alternatives for a character, especially if they will never get too expensive. 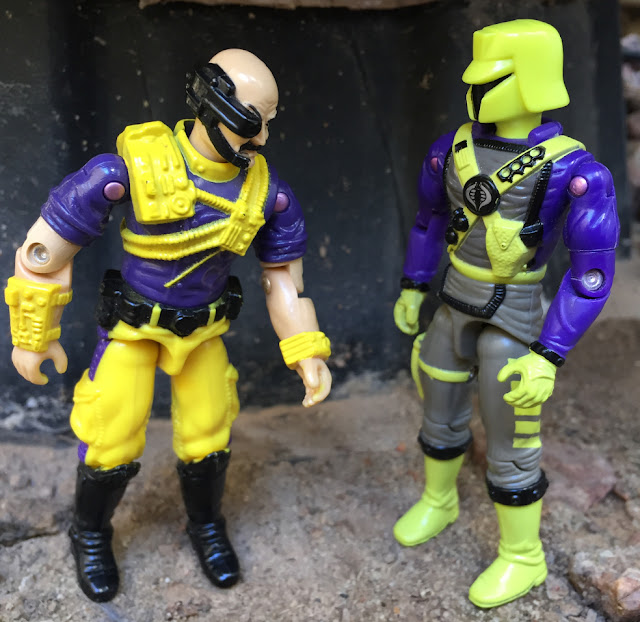 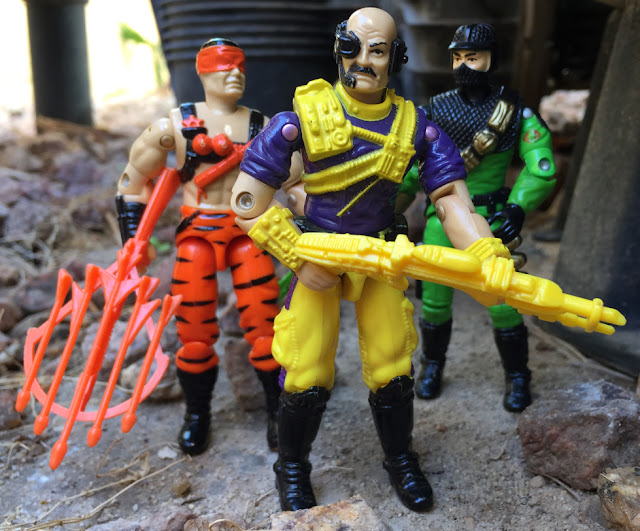 Posted by Robot_Sonic at 1:58 AM
Email ThisBlogThis!Share to TwitterShare to FacebookShare to Pinterest
Labels: 1993, Battle Corps, Dr. Mindbender