In the late 1990's, one of the most expensive figures in the entire line was the 1984 Baroness.  There was a perception that female figures were extremely limited.  So, dealers marked the figure up to stupid prices and it was common to see Baroness figures offered, and even sell, for around $50.  In 1997, Hasbro released a new repaint of the Baroness as a way to help get her into collector hands.  This figure, though, did little to sate the demand.  While the internet was slowly showing collectors that vintage Baroness figures were neither rare nor even hard to find, Hasbro's plans for Joe's relaunch in 2000 pretty much had to include the character as a way to show that the line was "for collectors".  However, Hasbro decided to go in a different direction.  Rather than just release a Baroness with colors that were inspired by the unproduced 1995 Battle Corps Rangers Baroness figure, Hasbro created a new character.  Thus, was born the twin sister of the Baroness named Chameleon.

There are many problems with the notion of the Baroness having a twin sister.  First off, the Baroness's hatred of Snake Eyes was entirely a result of his incorrectly blaming Snake Eyes for her brother's death.  The relative closeness of the family would imply that any twin sister would have been present when the Baroness and her brother were together.  Being a twin in a rich, European, aristocratic family pretty much dissolves any hope of Chameleon being a long lost sibling.  The Baroness's reliance upon her family in her origin makes a mysterious twin a soap opera like suspension of belief.  But, more importantly, the Baroness is an incredibly evil and conniving person.  She would not be so sloppy as to leave an identical twin out in the world were she not 100% sure of that twin's allegiances and feelings.  If the Baroness felt any sibling would have put her in jeopardy, she would surely have eliminated that threat.  So, the existence of a twin sister for the Baroness is basically anti-thetical to her character and is, on it's face, ridiculous.

But, that doesn't mean the character doesn't have some merit.  For me, the very early Joe team was somewhat desperate to learn more about Cobra: especially as Cobra was expanding.  One of the main intelligence gaps was that Joe did not know how Cobra obtained their funding.  It was believed that they were financed by foreign governments.  But, that had limitations, especially as the Russians also found themselves opposed to Cobra.  So, Joe intelligence had to find a way to determine Cobra's money making arm.  Joe double agents were usually sniffed out.  And, the fanatical followers of Cobra who were captured would give their life before meting out secrets of Cobra's operations.  This left few options.  But, the Baroness's unfortunate injury in the Hiss Tank explosion in Washington, D.C. gave Joe an in.  Joe operatives were able to acquire medical records for the Baroness: including x-rays detailing her facial bone structure.  This meant that the Joe team could create a credible doppelganger for the Baroness: especially since few Cobras would have seen her new face in the first few months after she returned to action.  The Joe team just had to find a volunteer....

This is where I've inserted the Chameleon character.  General Austin and General Flagg were able to find a woman with similar bone structure to the Baroness who had been convicted of confidence crimes and was serving a life sentence.  In exchange for freedom, the woman agreed to undergo the surgery to take on the Baroness's countenance and use it as entry into Cobra where she could find the source of their money.  This Chameleon took on the challenge and infiltrated Cobra operations in the Pacific Northwest.  In short time, she was able to gain entry to a small cell and start providing intelligence back to the Joes.  But, after General Flagg's death, General Austin was not close enough to the ground to fully understand Cobra Commander's paranoia.  In short order, Chameleon was found out.  Cobra Commander killed her and sent her body, packed in ice, to General Austin at the Pentagon.  Chameleon was not successful in her mission and lost her life in the process.  Austin took this failure to heart and began to re-assess the long term plans for the Joe team.

As a figure, Chameleon is fairly well done.  The black base is hard to screw up.  But, the red paint is applied very judiciously.  The crimson highlights bring out the intricacies of the Baroness mold in a way that the basic black never could.  The Cobra logo is created in relief.  It is another way that the figure differs from the original and helps set this figure apart, even though the basic color palette is similar.  Chameleon has some visual depth to her without being too busy.  She is a solidly balanced figure from an era where Hasbro could go from too bland to too busy within the same two figure pack.

Accessory wise, Chameleon is fine.  She includes the original Baroness accessories, also cast in solid black.  There is a difference in plastic so that you can tell them apart from the originals.  In 2000, Baroness rifles had yet to become the bane of collector existence.  And, as it was tied to this figure mold, it was great to see the complete set of gear available.  Along with a black figure stand, Chameleon also included a black version of Firefly's phone.  In 2000, the only release of this phone was with the original Firefly and the Battle Gear packs.  Getting it in black was of great interest to collectors of the day.  And, having Hasbro include it with multiple figures made the accessory more desirable.  Within a couple of years, the black phone would be overused.  But, the newness of it with Chameleon helped give the figure a little something extra.

If you simply take this figure as a Baroness repaint, it has quite a bit of merit.  The Baroness's original, all black look was both iconic and limiting.  Hasbro's planned 1995 figure, though, introduced a splash of red to the Baroness wardrobe and helped keep her grounded in her original look, but also making her slightly different.  Chameleon takes that idea and uses it effectively.  She easily works as a new version of the Baroness or can be used as Chameleon.  This figure takes no risks, but is different enough that it gave collectors something different in 2000.  Hasbro somewhat played it safe with the ARAHC releases.  And, that backfired as the line quickly stagnated at retail.  But, to be fair, this Chameleon was part of the problem.

The first wave of the A Real American Hero collection was shipped in cases of 12.  But, there were only 5 unique packs in the wave.  The result was an uneven case ratio.  All the packs were shipped 2 per case except for Snake Eyes/Stormshadow and Cobra Commander/Chameleon who were each three per case.  The ninja pack was a good choice.  Snake Eyes and Stormshadow were two of Joe's most popular characters.  And, the pack, even at 3 per case was quick to sell out.  Had it not been carried over to wave 2, it would, likely, have been even more expensive than the Firefly/Undertow pack in 2001.  Cobra Commander/Chameleon, though, was a bit of a miscalculation.  Hasbro was still going from old stereotypes of collectors from the mid 1990's.  So, they eschewed army builders and focused on characters they thought were considered "rare".

But, they miscalculated the demand for Chameleon.  She quickly backed up retail throughout the U.S. and was the only Wave 1 figure pack that didn't sell out and remained available into 2001.  Unlike the hordes of Big Ben/Whiteout packs that became the scourge of collectors for the remainder of 2001, though, the Chameleon pack, eventually, sold out.  The terrifying influx of new Joe collectors in 2000/2001 was able to absorb the overstock.  (People talk about 2007 bringing in a rash of new collectors.  But, it paled in comparison to the deluge that flooded the community in 2000/2001.)  So, Chameleon did disappear.  But, she never found any cachet as a "desirable" figure since she spent so many months collecting dust on retail shelves.

The Baroness mold didn't have much history until the 1990's.  It was used by Hasbro and released in the U.S. and Europe in the '80's.  In the mid 1990's, she showed up in India where Funskool used her for their Baroness release.  (Funskool also sold her under the Nilco brand in Egypt.)  It turns out, Funskool also used her for the Rednok figure that was released under the Complan Commandos banner.  Hasbro got the mold back in 1997 where they used it in the 15th Anniversary releases.  This Chameleon showed up in 2000.  In 2002, the Baroness was used in a Convention set and has both Crimson and Fuchsia versions available.  In 2004, Hasbro sculpted a new head for the Baroness body and released it in a comic pack as well as the Cobra Imperial Processional set in 2005.  So, modern collectors saw the mold quite frequently: even if the overall general appearance of the figures were not overly diverse.  There's still some potential left in the Baroness mold.  But, it's unlikely we'll see any of the fulfilled any time soon.

Chameleon figures are neither popular nor hard to find.  Due to the over packing in her original case, the figure never saw aftermarket appreciation like the Firefly/Undertow and General Tomahawk/Dialtone packs did after they were discontinued in 2001.  Even today, the figure is cheap.  You can easily get a mint, complete with filecard version for $5.  You can even get carded versions for that price from time to time: though those usually run in the $12 range.  For the price, the figure isn't bad.  There's really no way to use the figure in any capacity other than the Baroness.  But, this figure works as an alternative look for Cobra's original villain-ess.  I'd go so far to say that this might be the best repaint of the Baroness mold.  (The crimson convention release is pretty strong, though.)  She is true to the character's roots, but different enough that you kind of want to own her.  Were it not for the stigma of it actually being the Chameleon character, I think this figure would be substantially more popular. 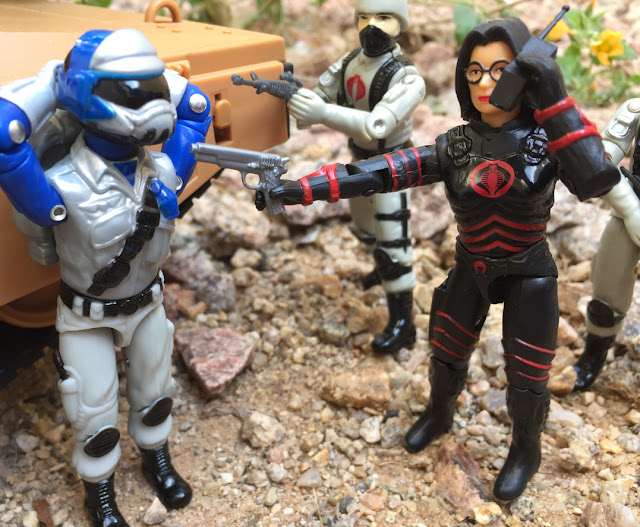 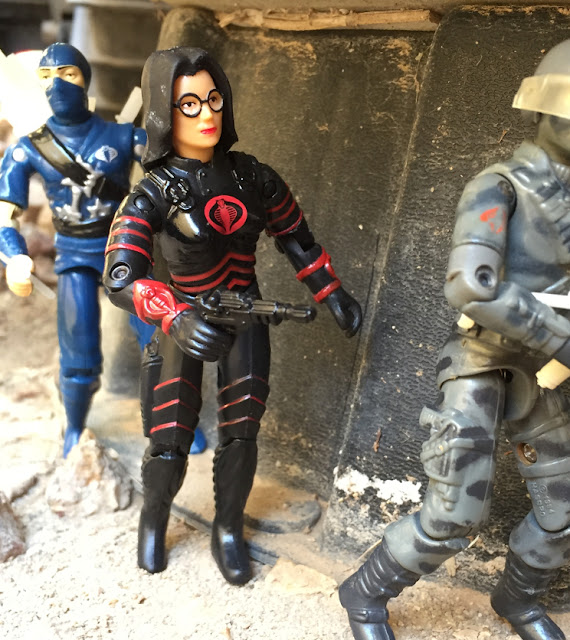 Posted by Robot_Sonic at 1:53 AM
Email ThisBlogThis!Share to TwitterShare to FacebookShare to Pinterest
Labels: 2000, ARAHC, Baroness, Chameleon