If you collect vintage Joes exclusively like I do, you have been abandoned by Hasbro for over a decade.  Even the club turned its back on you eight years ago.  In short, there is, officially, nothing new to collect for aficionados of this figure style.  However, factory custom figure makers have filled that void.  Starting shortly after Hasbro told vintage Joe collectors to get bent, factory custom makers have filled in massive army building gaps for those of us who have a desire for something new.  In 2017, the game was upped when army builders were joined by a phalanx of "character" figures who offered collectors even greater diversity in their collecting options.  The last of these figures to be released in 2017 was originally exclusive to the So Cal Joe Show held in Southern California in the fall of 2017.  Outlaw used existing parts that were created by factory custom figure maker Red Laser's Army that were then combined into an exclusive amalgamation and color scheme.

I'll be the first to admit that I'm not a huge fan of a Torpedo head on a figure that's not a diver.  Mostly, this is bias leftover from childhood.  Torpedo was THE diver on the Joe team.  And, while he that awkward appearance in G.I. Joe 16 wearing his dive suit on land, I simply couldn't see the figure as anything other than an aquatic adventurer.  So, I see the Torpedo head on this Outlaw as a bit of a detriment.  However, the covered face also offers a bit of leeway in the character's design.  Red Laser's Army has produced the head from the 1982 Flash/Hawk/Steeler figures.  It's been used a couple of times already.  So, giving this figure the same head would simply make him appear to be either Hawk, Flash, Steeler or Starduster.  None are great options.  The 1982 Snake Eyes head (which Red Laser also used to great effect on his Commando figure) is too iconic.  It's appearance always holds ties to Snake Eyes or the foreign characters of Cobra De Aco or Cobra Mortal.  So, using Torpedo as an alternate head was a bit of creative chance that worked out fairly well. 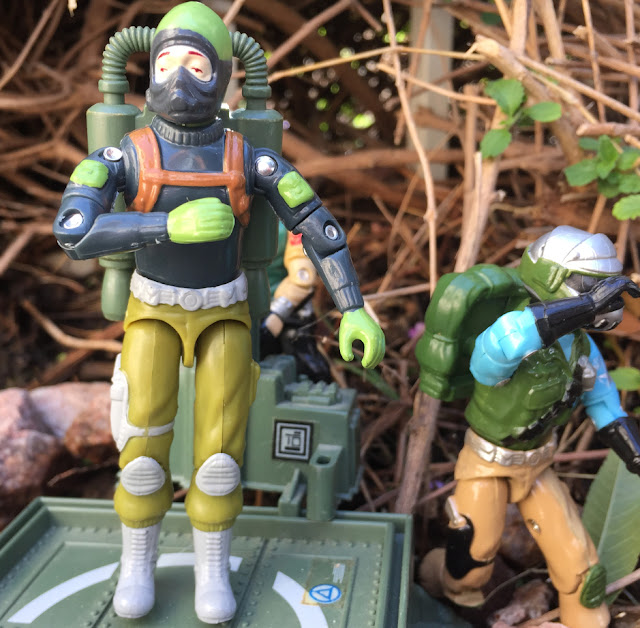 The thing I like about the character Factory Custom figures we have seen so far is that they look like they could have been released in 1983.  The colors are basic, but consistent with what Hasbro used.  If toys would have required two or three repaints in order to turn a profit back in the 1980's, I could see the Joe line filled with figures like the Red Laser Army offerings that mixed up parts and brought some additional colors to the Joe ranks.  For someone like me, who still holds the early Joe years as my most nostalgic, these figures are the perfect addition to my team.  Even the bright green paint on his head is a match for the 1983 Zap's highlights.  The use of black and grey chest pieces also adds some depth to the figures and helps them stand out among 1982 and 1983 figures.  Yet, they are still true enough to their roots that they blend in, too.

The main reason I have interest in this figure, though, was that something about it reminded me of Joe Colton.  I saw this configuration of parts and color and thought that a vintage Clutch head on this body would be a nice rendition of a 1970's era Joseph Colton.  He's part military, part adventurer and part covert ops. You can see my lbc in the photo below.  I need to touch up the head.  But, I think the head is just a bit too big for the body. 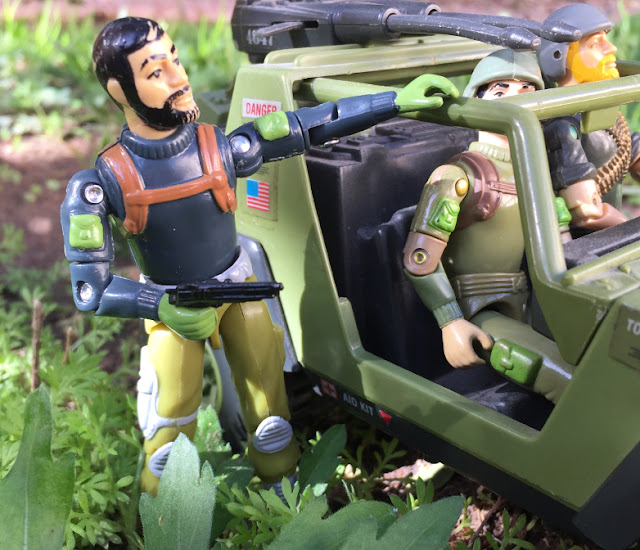 This notion of Colton is a way to bring that character into the early Joe team, before he went to work for other branches of the government.  I like characters like this since they would have been around as the Joe team was being formed in the late 1970's and early 1980's.  Colton likely would have input into the team's purpose and design.  While he, ultimately, left to pursue other interests, he was still a part of the group who made Joe the international force they would grow to become.

There is a very small, but vocal, minority of collectors who are opposed to these factory customs.  Early on, it was populated by groups of collectors who defended Hasbro.  But, Hasbro has shown they don't care about the existence of these figures at all.  Now, the detractors are heavily people who worry about the values of their collections.  And, if I had 10's of thousands of dollars invested in toys, I might have concern about value, too.  One of the things we've seen in toy collecting in the past couple of years, though, is greater and greater price disparities between loose and carded or boxed items.  This is almost exclusively driven by the fact that carded or boxed items are far rarer than loose and it's extremely unlikely someone's going to find massive amounts of carded or boxed overstock vintage G.I. Joe toys sitting in a warehouse.  I've felt that the chasm between loose and boxed/carded will grow wider in coming years.  Packaged items will be the "collectibles" that are used for investment.  While, loose items will be the domain of casual collectors who run mostly off of nostalgia.  In that regard, I don't mind factory custom items.  They are all easy to tell apart from the originals and they offer casual collectors a way to enjoy some items that are harder to find or too fragile to ever take out of their protective cases.

In terms of gear and construction, Outlaw isn't stellar.  He includes just two small pistols.  They have very fat handles and are definite thumb-breakers.  The weapons, though, are two tone.  I didn't look closely enough to see if the paint was factory or aftermarket.  But, the pistols are different from the similar weapons included with the Red Laser Army flavors of Steel Brigade figures.  Returning to the thumbs, Outlaw's hands are small and closed.   I fear forcing any large weapon into the hand for fear of breakage.  It's a common issue with many of the 2017 releases.  And, as many include fatter handled weapons, it's a legit concern.  But, the Joe groups are full of pictures of the various figures holding their weapons.  So, it can be done.

The factory paint on the figure is very nice.  You do see some issues with the eyes from time to time, though.  But, the grey/black shirt, leather brown straps, green pants and grey highlights add up to a visual feast.  A six color figure is better than what Hasbro offered to collectors at retail between 2003 and 2005.  Plus, the colors complement each other and don't create a look that's too busy.  He has enough color to be interesting while being generic enough to not get lost in visual overload.

Outlaw figures were first available at the So Cal Joe Show.  Unsold figures were then sold in the $15 range to general collectors.  As of now, that's about the price you'll pay for one of these guys.  Factory custom figures have generally gone two routes on the aftermarket.  They either become really cheap and easy to find.  Or, they dry up and see a good bit of appreciation.  As the creators of these figures have gotten better at both estimating collector demand as well as creating figures that collectors get excited over, we've seen the more recent figures tend to take the latter path.  But, with another large year of figures ahead for collectors, some solid designs are sure to get lost in the shuffle.  As such, I have no idea on the future for Outlaw.  I bought mine so that I could make the Joseph Colton custom figure. Others bought him for his exclusive nature.  And, others bought him because he's cool.

Whatever the reason, this is a figure that's well made, designed correctly and should hold collector interest over time.  Low production numbers will keep him from being overly common in the subsequent years.  But, I also don't see this guy being among the most popular figure offerings, either.  Basically, he's the perfectly average figure.  Which, frankly, was one of the most important aspects of the vintage Joe line.  Not every character or figure was a superstar.  But, the other characters existed as both support and as entry points for kids who liked firefighters, dogs, mountain climbers or pilots.  I see Outlaw in that vein.  Plus, he's designed in such a way as to make him conducive to photographs.  So, that's a lot going for a figure that would otherwise, likely, be forgotten in a couple of years. 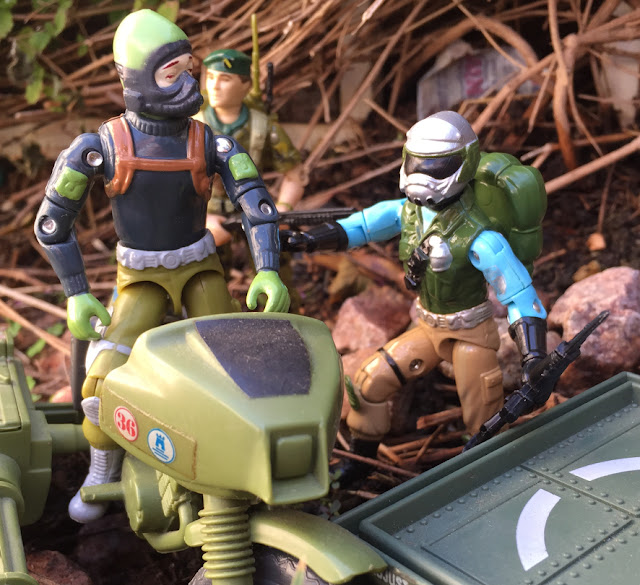 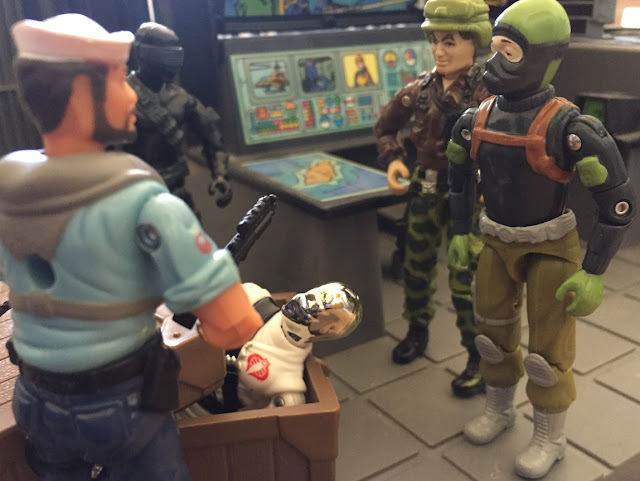