While most collectors demarcate the Joe line between the '80's and 90's, the truth of the matter is that 1990 is far closer to the quality associated with the 1980's than than its actual decade.  In fact, in looking at the year, there are really only three problematic figures against which you could argue their suitability to the classics.  The Sonic Fighter Lamprey (he of neon orange) and Captain Grid Iron are the first two culprits.  Both have some redeeming factors, though.  The final figure in the triumvirate of oddity is Rapid Fire.  Here, you have a straight repaint of the 1988 Mail Away Super Trooper figure, only colored in pastel green and orange.  Add in the fact that he was only packaged with a VCR tape and you get the most obscure and forgotten member of the class of 1990.

Rapid Fire's only claim to fame is that he was packaged with an episode of the DIC G.I. Joe cartoon.  While I'm not a toon fan at all, I did watch the original Sunbow cartoons when they aired after school each day.  However, by the time the DIC cartoons came out, my only Joe media exposure was the comic.  So, I was not privy to the horrors inflicted upon the world from that segment of Joe history.  I, of course, have the tape included with Rapid Fire.  But, I also have no means to watch it.  I haven't owned a VCR in well over a decade.  VCR tapes don't seem all that antiquated.  But, by 2003, Hasbro was including DVD's with retail figures.  And, that was 15 years ago.  The tape is simply a relic of a bygone era and something that my grandkids will wonder about when they have to liquidate my collection in another 60 or 70 years.

Rapid Fire is a straight repaint of Super Trooper from 1988.  This made the figure cheap to produce and likely made the product feasible.  Super Trooper, himself, is an amalgamation of Knockdown's head, Outback's chest, Wet Suit's arms and waist and Zandar's legs.  At least Hasbro put some effort into the parts to make them seem like a new figure.  But, the combo of arms, chest and armor are not a perfect match and Rapid Fire's arms don't rest at his sides.  In this regard he resembles the Joes of 1994.  He also includes some of Super Trooper's gear: the helmet and rifle.  Both are in pastel green.  They look odd and are the only appearance of this color on accessories in the line.

As a character, Rapid Fire is boilerplate for throwaway characters Hasbro would made from time to time.  He was top of class...excellent...highly motivated...yada, yada, yada.  In short, he has nothing distinguishing about him other than the Easter themed color palette.  Even for me, the character has no real cachet.  Super Trooper was interesting because the chrome made him visually appealing.  Rapid Fire is different.  But, his outlandishness neither fits with the neon themes that became prevalent in later years nor with the sparse oddballs of the line's earlier years.  He's just kind of there and doesn't do much other than fill a hole in my collection.

I can see Rapid Fire as a maritime figure, though.  His colors are a good enough proximate for Wet Suit and he would work in nautical settings.  I'm not sure what he would do.  But, Rapid Fire even looks ok aboard something like the Whale.  Here, his oddball design might be a better fit.  Though, his metal armor would spell certain watery doom should he he ever fall overboard.  Outside of that, though, I'm at a loss for Rapid Fire's use.  Visually, the figure is interesting as a novelty.  But he has no real uses.  In pretty much every use case I come up with for Rapid Fire, I find that the Super Trooper figure just works better.

Rapid Fires may be obscure and relatively difficult to find in general collections: but, they are also cheap.  The poor colors and odd method of release have left the character a neglected member of the Joe team.  You can find carded figures with ease for $35.  With a little patience, you can get a mint and complete with filecard figure for under $15.  Though, as always, dealers sell them for nearly double that will sell a few due to impatient buyers who misinterpret the figure's rarity.  It's a lot to pay for a figure that isn't that useful, has bow arms and reuses parts in an uninteresting way.  Were I not a completist, it's doubtful I'd own this figure.  Truthfully, had I not found him for standard pricing at a local shop, I would not own him.  But, he was there, the price was right and the figure had all the parts that meant I could cross him off and never have to think of him again.  I'm a big believer in that there's good, fun, odd figures that make the line interesting.  Then, there's ones that simply don't fit and aren't interesting enough to outstrip their poor quality.  Rapid Fire falls definitively in the latter camp for me.  Others mileage may vary.  But, his sparse appearances in collector photos or dios tends to support my stance that he's among the least popular figures Hasbro produced in the vintage line. 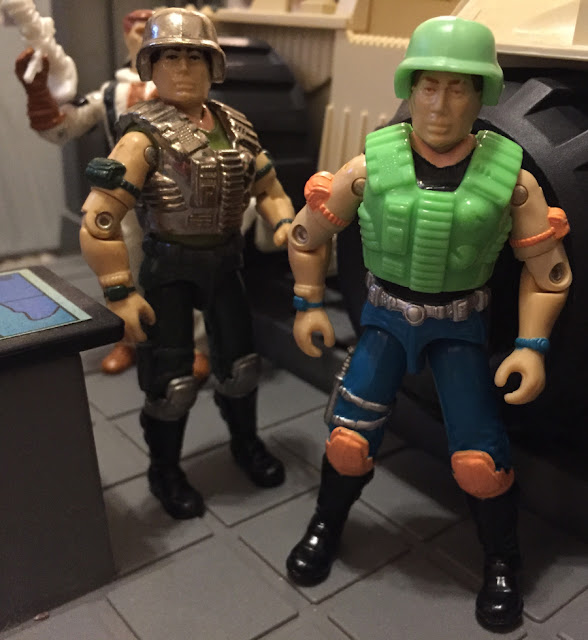 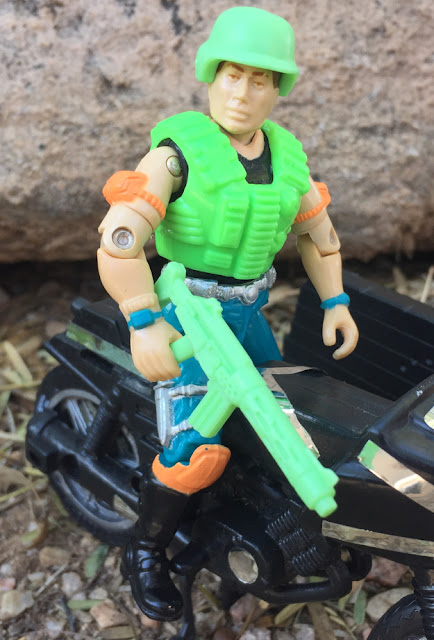 Posted by Robot_Sonic at 1:43 AM
Email ThisBlogThis!Share to TwitterShare to FacebookShare to Pinterest
Labels: 1990, Rapid Fire