1985 is a spectacular year of Joe figures.  But, every year has some characters or figures that simply don't resonate with the collecting community as much as others.  For 1985, Bazooka remains the least popular figure and character from his year.  (You might make a case that a vehicle driver like Crankcase or Frostbite are less popular than Bazooka.  But, Bazooka was a carded figure which gives him the edge.)  That isn't to say that Bazooka is unloved.  He definitely has his fans.  And, being the worst figure of 1985 is way better than being one of the best figures of 2005.  In 1988, Hasbro revisited Bazooka when they included him in the Tiger Force subset.  While this figure isn't perfect, it's also probably a better version of the character than his original incarnation.

In trying to name all members of Tiger Force from memory, Bazooka is the most likely member I'd omit.  Skystriker would get recalled for rarity.  I'd definitely recall a few of the European members before Bazooka.  And, I'd even bring up the 2003 team members before getting to Bazooka.  This isn't because the figure is bad.  It's because Bazooka isn't a character that ever really resonated with me.  And, the Tiger Force look is so subdued that it's almost non-descript.  Other Tiger Force members feature ostentatious designs that seer into your mind.  Bazooka does not.  His mostly white shirt and and pre-dominantly green pants hide his Tiger Force affiliation more so than any other team member.  He features yellow stripes on his pants to give him away.  But, this entire ensemble looks as if Bazooka has home and away jerseys for when he fights Cobra.

It's the sports theme that really limits Bazooka, for me.  As a kid, the character didn't resonate much with me.  And, Bazooka was mostly limited to second seat duty in the Bridge Layer or Mauler.  Here, he could utilize his secondary specialty of tank operator and still come off the bench to blow up a Hiss Tank or two.  This was an extremely limited role.  And, as such, my childhood Bazooka found himself taken apart and his legs given to custom figures which had more potential uses.  Bazooka's legs were used on several of my favorite custom figures and it was only my acquisition of all new retail figures in 1986 that lead me to replace the original Bazooka with another version to be used as the intended character.

I quit buying Joe figures in 1988.  I did, though, pick up a Tiger Force Roadblock, just to get the Roadblock accessories that had been broken on my original figure for a few years.  I have no recollection of whether I saw Bazooka that day, or not.  I bought both the Roadblock and Hardball.  I remember thinking I'd like a Flint since my original Flint's shotgun had been lost several times and was currently MIA.  But, the thought of picking up a new Bazooka was never really entertained.  But, in the Tiger Force colors, Bazooka is actually more useful.  With the bright red jersey now gone, Bazooka's muted colors better disguise his sports theme.  He still has no straps on his shirt to denote any real way to wear his backpack.  But, the overall look of the Tiger Force Bazooka is definitely superior to the original version.

Gearwise, Bazooka includes the same weapons as his original figure.  The backpack is in a darker green that was common in Tiger Force and is very similar to the green color commonly used on Brazilian accessories.  The deep, rich color is a nice difference from the lighter 1985 hue and gives the pack more depth.  The brown helmet is, again, a stark contrast to the 1985 helmet.  It also brings some additional color to the figure, overall.  The helmet color is relatively rare in Joe accessories.  So, it's a refreshing break when reviewing accessories.  The rocket launcher is, basically, the same as the 1985 release.  I still have my Bazooka hold the weapon with the handle at the rear where the pointy end faces Bazooka's body.  I get constant grief from this on every photo I publish of Bazooka.  This posing is a holdover from when I was a kid and is the way Bazooka will be posed in my collection until the day I die.

Bazooka got little use.  There were only three figures that ever used the mold.  Though, his legs did appear on the 1987 Rumbler figure.  We have the 1985 Bazooka, this Tiger Force version and a Brazilian version based on the 1985 that was released by Estrela.  The only real difference for the Estrela version is that the green accessories are the darker, Brazilian green.  So, fans of Bazooka have two looks for him: the original and Tiger Force.  There were many figures in the carded 1985 lineup who only saw release in the U.S. and Brazil.  The Crimson Guard, Tele Viper and Dusty join Bazooka as figures released both in a U.S. repaint subset and in Brazil.  It's possible the mold disappeared there.  But, with so many other figures from that year going on to India, it's possible that Funskool got the mold, but never produced the figure.  Regardless, Bazooka would have been a great repaint candidate in the 2000's.  But, the character's shoddy treatment in media of the time didn't really lead to a great amount of collector demand.

Tiger Force Bazookas aren't nearly as common these days as they should be.  We're about a year into a massive upswing in G.I. Joe prices.  And, figures like the Tiger Force Bazooka are getting swept up in the wave.  Dealers sell an appalling amount of the figures for $40.  Left to market prices, though, mint and complete figures can be had for $20 to $25 each.  You can get deals, though, from sellers who don't pay much attention to current trends and find them for $12 from time to time.  At $12, this Bazooka isn't bad.  But, at $20+, this guy is an easy skip.  Still, he's more useful than the original Bazooka figure.  And, if you're a fan of the character, this version is a much better match with a Mauler to fit Bazooka's tank operator secondary specialty. 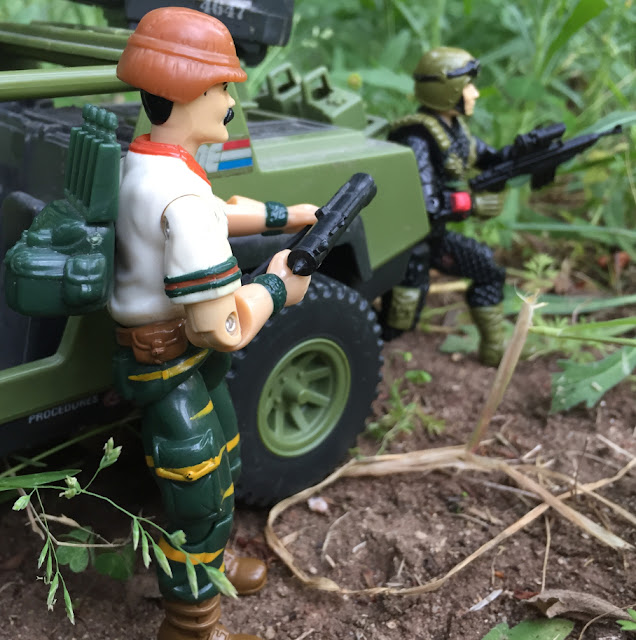 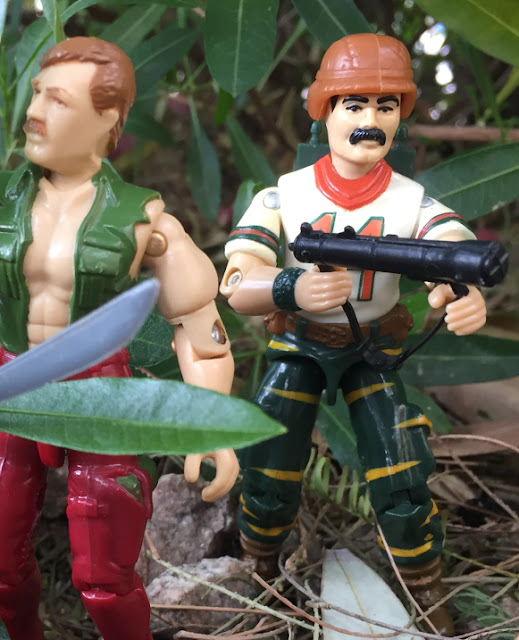 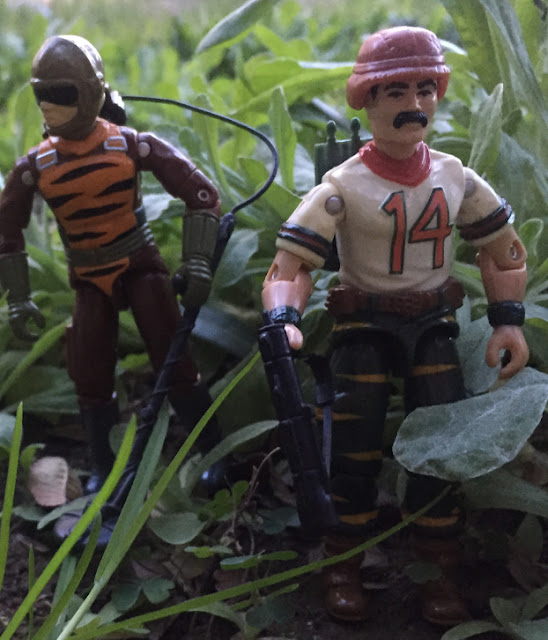 Posted by Robot_Sonic at 1:23 AM
Email ThisBlogThis!Share to TwitterShare to FacebookShare to Pinterest
Labels: 1988, Bazooka, Tiger Force