Funskool started producing G.I. Joe figures in the late 1980's.  Through the years, production stopped and started and figures would fall in and out of production.  Hasbro first recalled molds from Funskool in 1997.  Many of the 1997 and 1998 Toys R Us figures had most recently been used by Funskool and still featured Funskool stamps.  What this meant, though, was that when Funskool figures started getting mass imported into the U.S. by toy dealers in early 2001, many of the collector favorite molds like Firefly, BAT, Baroness, Lady Jaye, Snow Job and Gung Ho were long out of production and not available for cheap prices.  There were some additional figures that were out of production in 2001.  But, in 2002, figures like Flint, Ripper, Buzzer, Zarana, Scrap Iron and Beach Head went back into production...offering collectors cheap options for what had been collector favorite, but hard to find molds.

At some point in either 2002 or 2003, an odd Funskool offering showed up.  A lot of currently in production Funskool figures but on Russian language packaging appeared for sale.  At first, they got a lot of attention.  But, as Funskool was overly common and generally unappreciated at the time, the figures quickly fell by the wayside since they tended to be slightly more expensive than the same figures that were in stock at every online G.I. Joe dealer of the era.  Hidden in the set of Russian Funskool figures, though, was a single odd release.  While the rest of the figures were currently shipping from India, there was one figure that was never available during the standard Funskool era of 2001 through 2004: Chuckles.

As a figure, the Funskool Chuckles would have been perfect for the early 2000's Joe era and also a disappointment.  At the time, collectors loved the Funskool offerings that were nearly identical to the American release.  The reason was that Joe was in it's first Renaissance period in the early 2000's and prices of popular figures and characters were quickly rising.  It simply made no sense to buy a Flint for $15 when you could buy a Funskool version for $4 and get, basically, the same figure.  Our current collecting sensibilities dictate that the two figures were too dissimilar for these collector feelings to be valid.  But, during a time when collectors were more budget restrained, choices such as the one above were more common.

So, were Chuckles one of the widely available figures during the Funskool import era, he would have been extremely popular.  His parts are good for customizing.  And, his holster and pistol remain sought after accessories to this day.  He would have been a strong seller.  I'd have certainly bought at least one.  And, maybe a few more.  During that time, I army built Chuckles figures.  So, getting a few for $4 each would have been attractive.  (I used the figures as prisoners and retain a large squad of Chuckles to this day.)  But, at the same time, Chuckles would have been a bit of a disappointment.  The figure is just too similar to the American version.  So, while I would have liked the figure, I also would have lamented that he wasn't something more unique so that he stood apart.

Which isn't to say that this figure doesn't have differences.  In general, the colors are richer.  The Funskool Chuckles' hair is a bit darker and the blue of his shirt is a slightly deeper shade of blue.  His pants are slightly different, too.  Side by side, it's easy to tell the figure apart from an American release.  Even the gear is the same.  The Funskool holster is a much darker brown and isn't as pliable as the Hasbro version.  The pistols are nearly indistinguishable.  In short, the Funskool version is a perfect Chuckles.  But, it's also a perfect Chuckles that you can more easily find in the Hasbro version.

We know quite a bit about how Funskool worked in the 2000's.  During that era, anyone who had money to spend and was willing to pay for at least one day's worth of production run (around 3,000 figures) could have a figure made for them.  (Small quantities of Ripper were available in the U.S. because a retailer in India ordered a custom run and the limited overstock was offered to an American dealer.)  So, it's likely that some retail outlet or individual wanted to produce toys for the Russian market and found Funskool a willing partner who could accommodate them.  The fact that overstock continues to be available today would suggest that the toys weren't all that popular upon their release.  But, we also have no idea of the production numbers.  But, they remain very common today and massive amounts of the Russian series have been imported into the U.S. by collectors.

My one regret about Chuckles is that there was never a version made of him that was materially different than the original American figure.  Sure, there are tons of Funskool variants with slight color shade differences.  (There are actually carded Funskool Chuckles figures that feature hand painted flowers on his shirt.)  But, there's not a version that deviates from the blonde hair and blue shirt.  Even the terrible collector's club version was basically the same.  (Another disastrous blunder by the club.)  I would have loved to have seen a version with a red shirt, green shirt, really anything other than a blue shirt.  But, that never happened.  At least this Funskool version offers something different to track down.  But, in the end, if you have the American figure, you have all the Chuckles you need.

Prior to the advent of the Russian Funskool figures, Funskool Chuckles figures were both hard to find and rather expensive.  The Russian figures brought Chuckles to the market and dropped the prices, even though there weren't really tons of them that showed up.  The Russian figs then dried up for many years.  But, a lot of dealer stock popped up again in the late 2010's and that once again brought Funskool Chuckles to the market.  Today, you can get loose figures for around $15 and carded figures for around $30.  You'll find them cheaper every now and then.  But, at the same time, the figure has gotten much harder to find than it was even at the beginning of 2018.  And, as foreign Joes have gotten desirable, you're seeing even slight drops in availability shoot prices through the roof.  If you want a Funskool Chuckles, it's probably best to get one now.  I waited too long and had to pay more than I should have.  But, since this is a character that's equally represented by the American figure, you can save your money and just get the 1987 release. 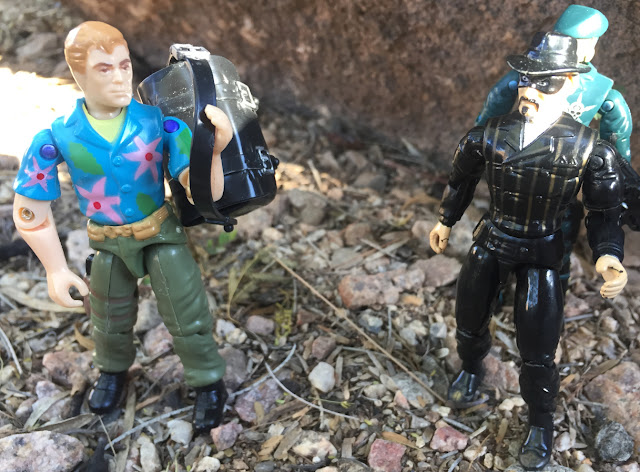 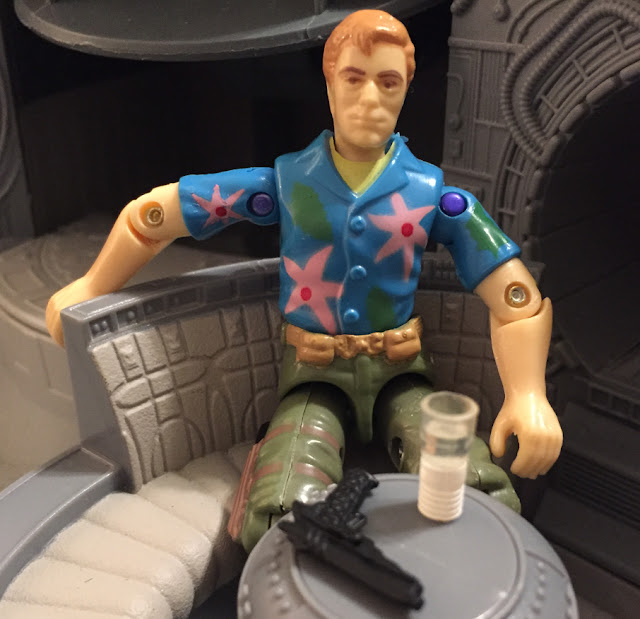 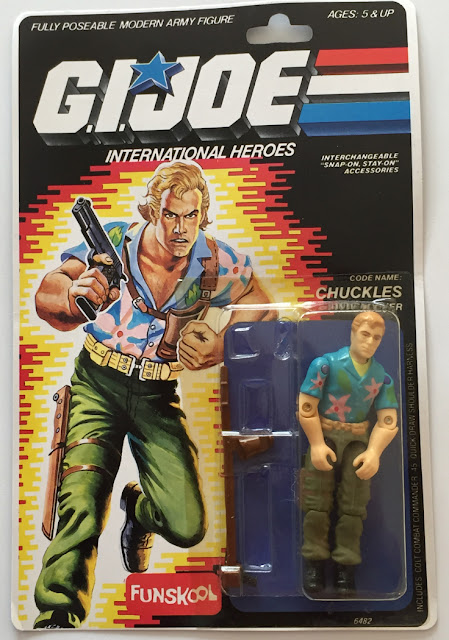 Posted by Robot_Sonic at 12:43 AM
Email ThisBlogThis!Share to TwitterShare to FacebookShare to Pinterest
Labels: Chuckles, Foreign Figures, Funskool