In 2004, Hasbro produced a Toys R Us exclusive 6 figure product named the Anti Venom set.  In it were several figures that were making a return to retail for the first time since the vintage days.  Even among the army building obsessed collectors of the day, the Anti Venom set found an audience.  It was appreciated by most collectors and the gripes with it were generally overwhelmed by the set's positives.  As the year progressed, though, variant Anti Venom figures started appearing.  Initially, these were light blue.  There was also another change, the caucasian Lifeline figure was now an African American Stretcher figure.  These figures were also well received by collectors and became rather common as they were brought over from Asia.  But then, another set of variants appeared.  These were dark blue variants that looked very Cobra.

It quickly became apparent that the dark blue figures existed in much smaller quantities than the light blue figures.   And, as such, even when these types of figures were an Ebay staple and would go unsold, the dark blue Anti Venom figures fetched much higher prices and were highly sought after.

First up is Barricade.  In addition to the dark blue, his armor is now silver.  It is a good looking figure and a very striking contrast.  But, with his helmet on, this figure would have had a very Cobra vibe.  I think that is likely the reason for the color changes.  The blue was too close to Cobra and on a figure like Barricade, his affiliation might have been lost.  You will notice the figure's head is painted flesh color: just like the production figure.  This is notable as the light blue variant of this figure had a molded flesh colored head.  The molded flesh would have had much less propensity for wear and tear as the figure's helmet was removed.  But, Hasbro went with the painted heads in both cases. 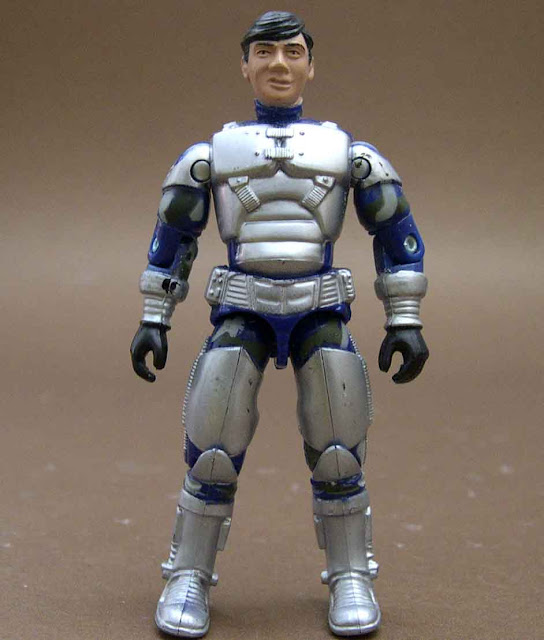 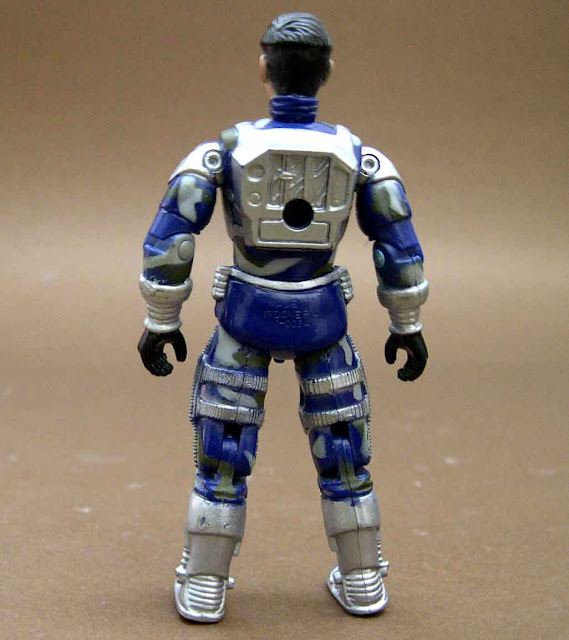 The next figure is Mutt.  In Mutt's case, though, I think the dark blue works.  I've always seen Mutt as having at least some affiliation with law enforcement and security within the Joe ranks.  So, seeing him in this darker blue fits into that image.  As such, I don't mind the Mutt in these colors and would actually like one of the figures.  Unlike the production figure, this Mutt features a flesh molded plastic head.  The production figure has a painted flesh head.  Not sure why the painted head was chosen for production as this head looks much better.  The molded flesh head also appeared on the light blue version of the figure. 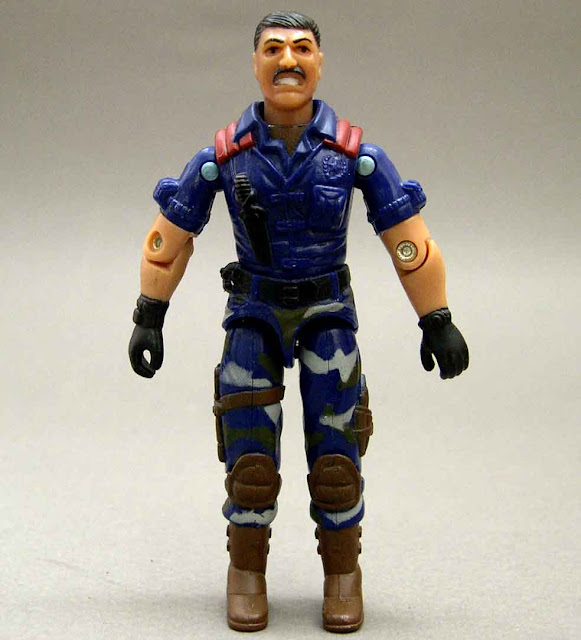 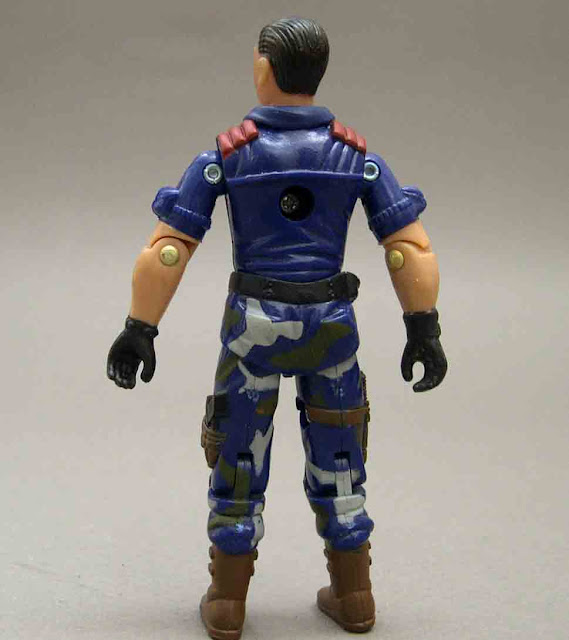 The next figure is Charbroil.  With Charbroil, like Barricade, the obscure character and need for a helmet would make him appear very Cobra.  As such, I find the production figure to be better.  But, this is a very different look for the character.  Again, this Charbroil has the molded flesh head. 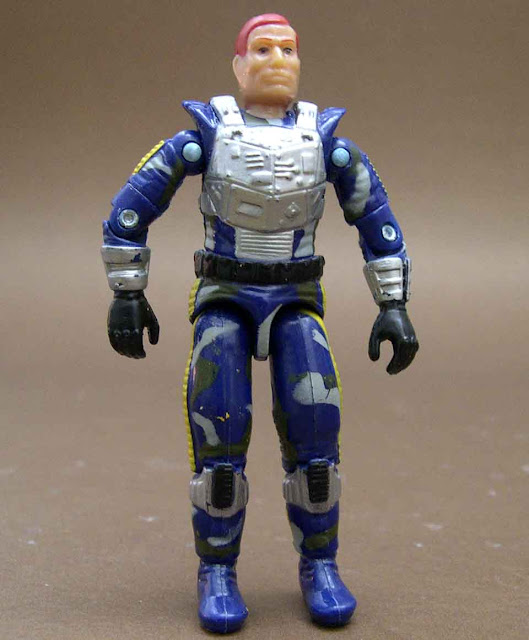 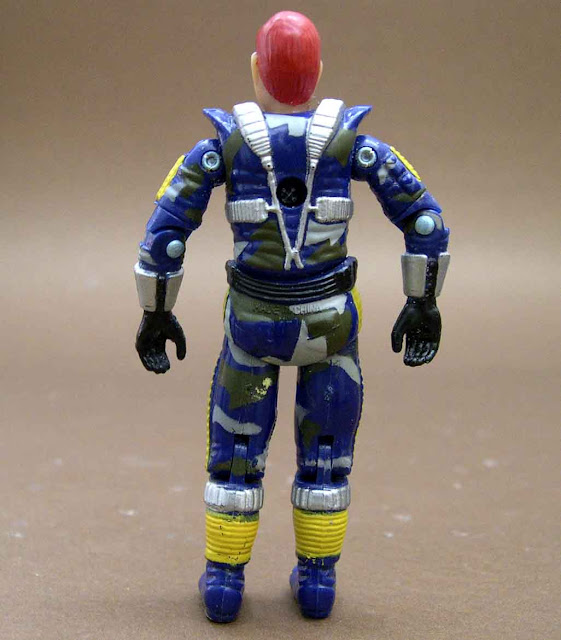 Next up is Duke.  I can't stand the painted sleeves on this Duke figure, just like I can't stand them on the production figure.  The only cool thing about this figure would be if you put a Cobra Trooper/Officer head on him and made him a Cobra Trooper.  But, even then, the sleeves look terrible.  Again, the flesh molded head appears here whereas the production figure has a painted flesh head. 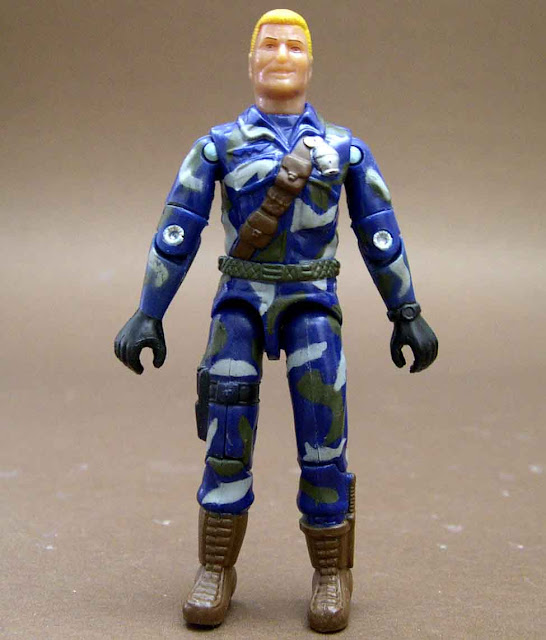 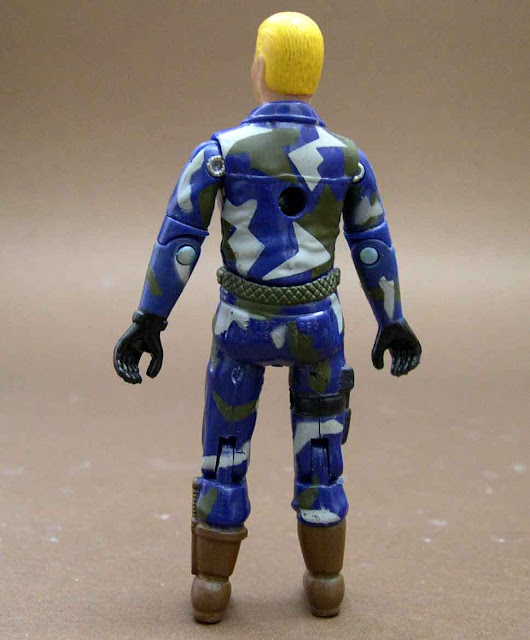 Roadblock is the next member of the set.  It was great to see this Roadblock mold, late of Funskool, make an appearance in an American set.  This dark blue version, though, is very close to the upper body look of the 1993 figure.  The dark blue pants are also a bit too much.  Were they black, this figure might be really cool.  But, in general, I prefer the 2005 HAS version of the this Roadblock mold.  Of note is that the blue pants to match the shirt on this version were not repeated on the light blue version.  The light blue version only has light blue pants, and an upper body that matches the matches the tan production figure. 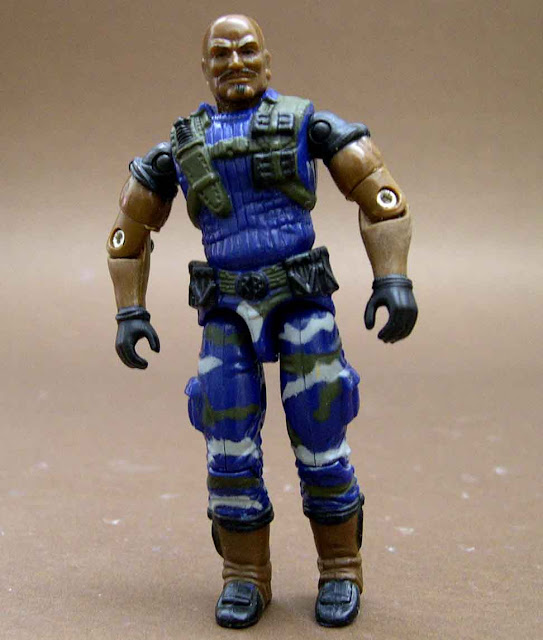 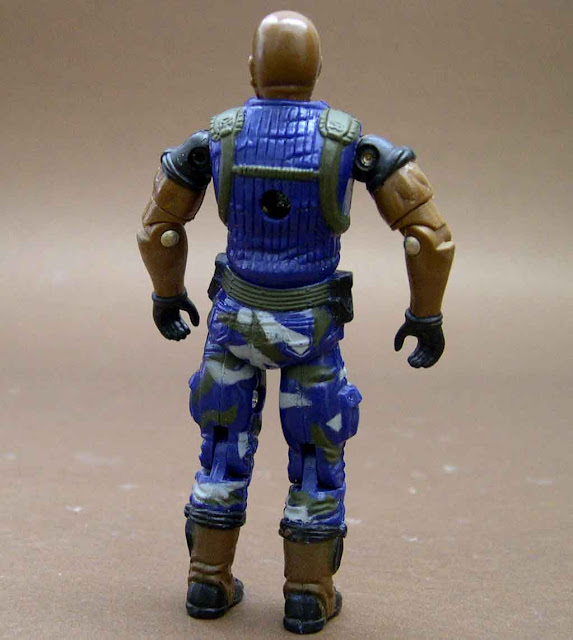 The final two figures in the set are the most interesting.  Two, you say?  I thought this was a 6 figure set?  Well, it was.  However, it appears that the last figure, Lifeline, went through a lot of changes before the final, production version.  The Lifeline figure uses the 1990 Stretcher mold.  For some reason, though, Hasbro had something against the Stretcher character.  In 2002, they released the body, but with a new head as Sideswipe.  In the Anti Venom set, they forewent the new head and simply recolored Stretcher's head as a Caucasian.  The result was Lifeline.

However, there were a couple of oddities.  In the light blue set, Stretcher was still African American and had a molded plastic head.  But, in this dark blue set, there were two differences.  The first is that Lifeline features a molded flesh colored head.  This is more consistent with the other figures in the set.  The second set of images, though, show a Sideswipe figure also released on the dark blue body.  Was Sideswipe planned for the release?  If so, why was he replaced?  Lifeline is a more popular character than Stretcher.  But, using the same body, with a different race as a different character seemed some lazy. 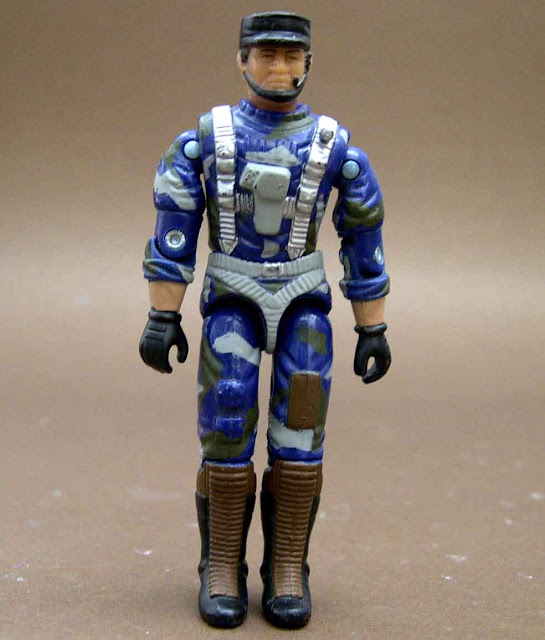 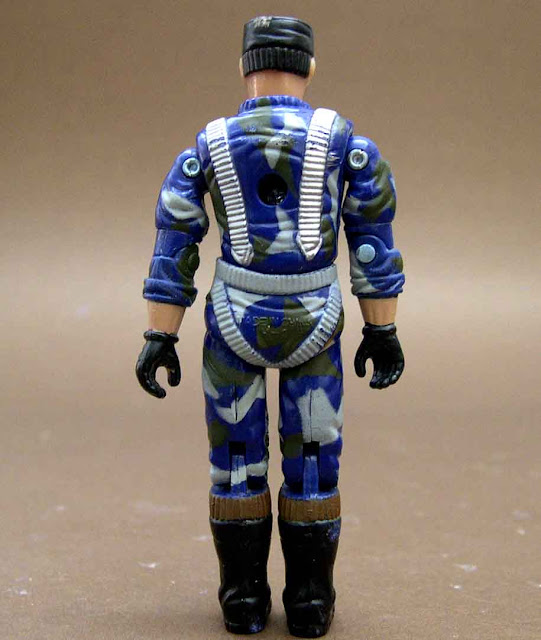 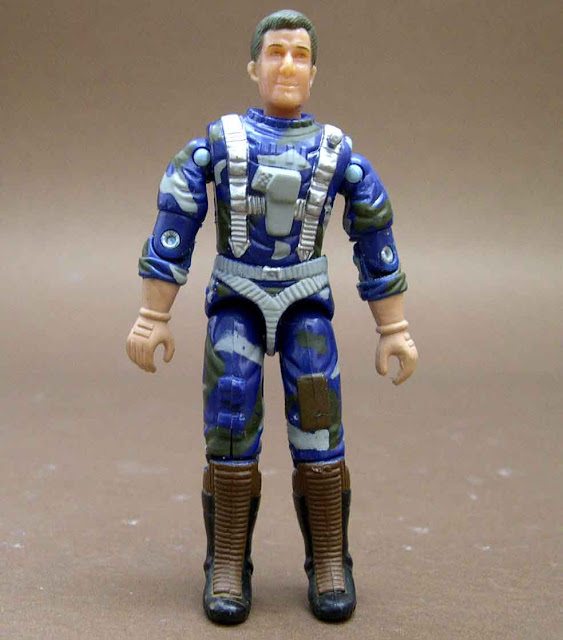 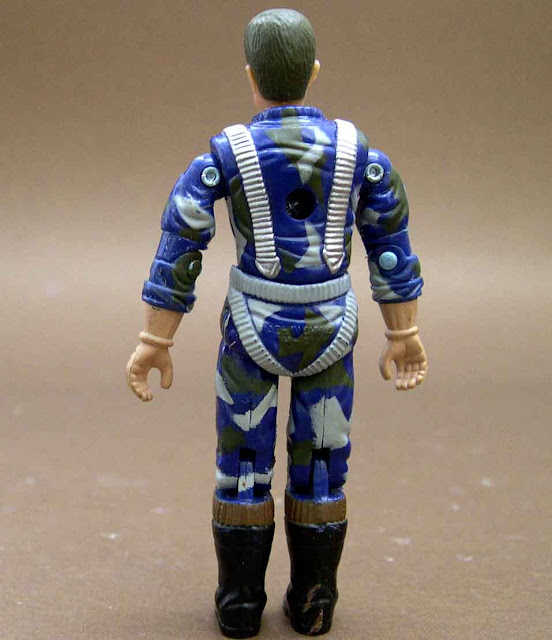 In all the dark blue Anti Venom set is interesting. But, I think the production version, minus the painted heads, is better.  This is a good insight into how sets do change over time and having access to some of these unreleased concepts is a rare way to see the evolution of a product before it reaches production.