Of the vintage sub sets, Slaughter's Marauders is the least represented on my site.  I didn't get around to the first member (Mutt) until 2008.  In 2014, I took a quick look at the European exclusive Low Light figure.  But, that's it.  Part of the reason for that is that I got rid of most of the figures years ago.  Another part of the reason is that every Marauders figure was a character and mold I had looked at in their original forms.  So, the need to look at the Marauders version was limited.  And, finally, Slaughter's Marauders came out in 1989...when I was totally out of Joe.  I have no real connection to them in any way.  As the years have gone by, though, things like that become less impactful in a collection.  Yet, I've never felt all that compelled to complete my Marauders team.  While Tiger Force got a solid cadre of characters as members, Slaughter's Marauders pretty much got Sarge and a few cast offs.  30 years later, though, this was finally remedied when Black Major introduced his factory custom Slaughters Marauders inspired Snake Eyes figure.

The first disclaimer, of course, is that the Slaughter's Marauders colors on this Snake Eyes do not match to the Hasbro figures from 1989.  It's brighter and more eye catching.  But, it's not going to match with your 1989 team.  On some level, that renders him less useful.  But, it also lets the figure stand more on it's own.  You can use him with the Marauders or just as an alternate coloring for Snake Eyes.  Snake Eyes being a lone wolf helps justify the color differences from the other Marauders.  But, it's important to note the difference.

This Snake Eyes is well painted and high quality.  It has two shades of green, blue black and brown.  The painted grenades help them stand out (something missing on the original figure) and give the figure details that help offset the color differences.  The green and blue base is not a color scheme that's traditionally associated with Snake Eyes and it's nice to get a bit of Snake Eyes diversity.  Sure, he needs to have his iconic black on most of his releases.  But, seeing some different colors for the mold gives you a chance to have some fun in photos and dioramas.

Slaughter's Marauders as a whole is an odd subset.  The colors look like they could be used in a temperate forest.  But, even there, the blue is just out of place.  But, the greens are a fun shade and the browns help the characters blend into certain terrain.  The subset's vehicles are the real calling card and the best part of the Marauders idea.  Hasbro never returned to the Marauders' color scheme in the 2000's on ARAH figure, even as Tiger Force and Python Patrol got their own themed sets.  I assume this was mainly due to Hasbro not wanting to pay Sgt. Slaughter for his likeness to appear.  But, the figures were also unpopular at the time and it's only been in the past decade that they have started to become staples of most every collection.

I don't know what you do with bright blue accessories.  They are very 1990's.  But, that's OK.  Factory customs have morphed from cheap army builders to artistic collectibles.  The blue weapons fit with the aesthetic of the Snake Eyes paint job.  At least you get the full complement of gear, too.  There's the Uzi, classic pack and iconic sword.  There's even a Timber.  I've said before how Timber means nothing to me and I've never cared for him.  For others, the Timber paint jobs are the selling point for the Snake Eyes repaints.  So, having him is a nice bonus.  The blue gear matches the figure, even if it makes no sense.  And, it makes spending around twenty bucks to get the figure more palatable as you feel the gear was matched to the figure rather than grabbed out of a vat of leftover weapons from previous runs.

The 1985 Snake Eyes figure had only two releases in the vintage line: the Hasbro version and an exclusive version released in Brazil.  The mold did not appear again for three decades.  Then, Black Major made the mold happen and we now have at least 20 new interpretations of this mold.  Most of them are Cobra affiliated.  But, it's fun to have a cornucopia of colors from which to choose of the Joe line's most famous character.  The most appealing aspect of the Slaughter's Marauders paint job was that there was no Cobra sigil and this was really Snake Eyes rather than the Cobra Invasor or Mortal.  It's relatively easy to remove the logos from the Cobra themed figures.  But, I'm loathe to modify figures that I collect and the Snake Eyes variants are too expensive for me to buy extras for customizing at this time.

This figure is available right now for $18.  Collectors have odd tastes and you never know which factory custom paint jobs are going to catch aftermarket fire and which will just fade into obscurity.  But, I suspect this paint job of Snake Eyes will remain one that's sought after: just because he fills a hole in a vintage subset.  But, I thought that about the Ghost Mortal, too.  And, he's faded into obscurity.  I'm glad to have this figure, though.  I've never been a Slaughter's Marauders fan.  But, having Joe's most famous character in his most popular costume as a member of the team gives it a bit more credibility.  We'll see where this figure is in a couple of years.  But, for now, he's one of my favorites of the new batch of paint colors. 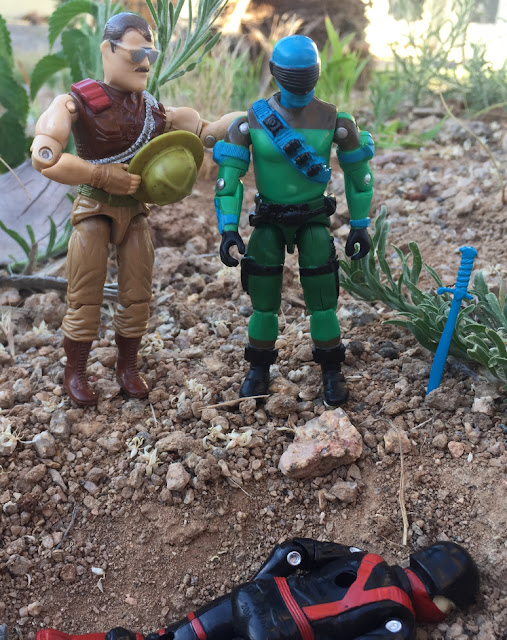 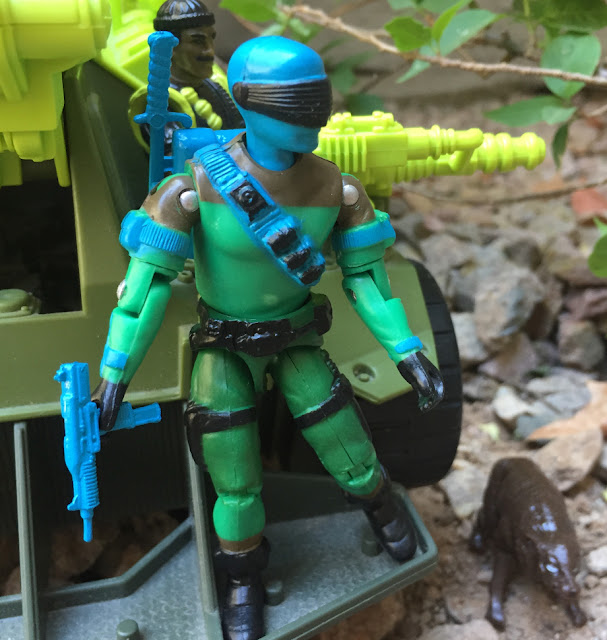 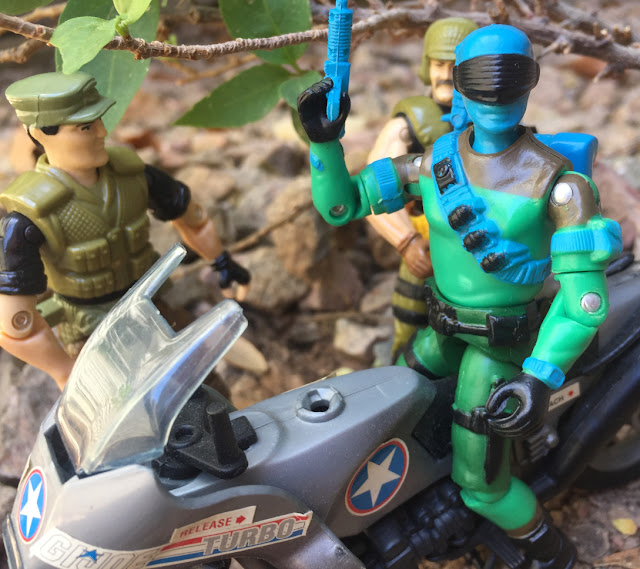