The 1983 Hiss Driver isn't really an iconic figure.  He often sits in his tank and simply hides in the cockpit: away from prying eyes.  But, as an early release, he is often held in higher regard than he would be were he released a decade later.  Since the figure is relatively common (it was a mail away for years and the Hiss was super popular) there has never been a great clamor for multitudes of repaints.  But, the Hiss Driver was also a case where Hasbro accommodated early collectors by dropping a repaint into the A Real American Hero collection.  The new character of Rip It was an interesting take on the Hiss Driver mold that was somewhat neutered by the fact that a classic army builder was now a character.

Collectors immediately attacked Rip It's name.  Being released at a time when most collectors were in their early 20's ensured that the juvenile jokes doomed the character.  18 years later, you don't hear as much of the ridicule.  But, Hasbro's new characters of the early 2000's were so embarrassingly bad that they have been rightfully discarded on the line's scrap heap.  Rip It was no different and the opportunity to create a new Hiss Driver Commander was wasted on a guy who will leave his unit to fight G.I. Joe on his own and who learned his expert tank operation skills by playing golf.  (I wish I was making that up....)

At his core, the Rip It figure was designed to be more "Cobra" in the sense that Cobra was understood by Hasbro in 2000.  But, the practical release of Rip It was not Cobra blue and, instead, a purplish blue that really doesn't fit with any other Cobra releases of the day.  Offset by globs of red paint, Rip It seems like a really cheap knockoff of the Hiss Driver instead of something interesting and fun.  Because the figure screams of minimum effort and unfulfilled potential, though, he perfectly fits with the ARAHC figure of 2000 and 2001.  This line had so much promise...which was never delivered.  Collectors were so happy to have figures at retail that many of the flaws were overlooked at the time.  But, by 2001, the cracks were there and the Hiss III (something that should have been a sure thing at retail) stuck around at nationwide Toys R Us stores for months.

While Rip It is considered a 2000 release, he didn't actually show up until January of 2001.  But, the timing of the 2nd wave of the ARAHC happened to coincide with the new year.  I had found all of the Wave II figures in late December of 2000.  So, the Hiss III was was the only thing really new to me as 2001 dawned.  I found it at a local TRU store and quickly bought one.  But, as soon as I got it home, the paint job and driver underwhelmed.  At the time, vintage Hiss Tanks and Drivers were plentiful and cheap.  The Hiss III was a downgrade from the original Hiss and Rip It was a flawed figure. My original plans to buy 5 or 6 of the new Hiss Tanks quickly turned to just the one and I never really regretted not picking up more for the $9.99 retail price.

It should be noted that Rip It features a different waist than the original Hiss Driver.  It's not as noticable as some other waist replacements on figures from the 2000's.  But, is something that creates a bit of incongruity if you army build both original Hiss Drivers and any subsequent release.  Rip It also has no accessories.  But, as he's supposed to be encased in the glass cockpit of a cheap and disposable tank, you can forgive the lack of gear.

Rip It figures started cheap and remain so to this day.  Aside from the fact that the Hiss III was available for quite a while at Toys R Us, large quantities of Rip It figures were available for many years from Asian overstock sellers.  It was easy to buy up lots of 5 or 6 Rip It figures for a couple of bucks.  Many collectors of the mid 2000's partook in these lots and then proceeded to RIT dye the figures in various color combinations.  You can still find photos of many of these creations and they all showcase the unfulfilled potential of the Hiss Driver mold.  Hasbro used it just three times: in 1983, for this Rip It and then again on the 2007 Convention release.  There is also the 2003 unproduced Wal Mart Hiss Driver that is out there.  But, in the end, two of the four Hiss Driver uses are rare and exceptionally pricey.  He remains a possibility for factory custom makers just because there would be demand for all black, real crimson, desert and arctic repaints of the figure.

If you want a Rip It, dealers often price him high: mistaking the pricey Convention and unreleased Wal Mart figures for interest in the character rather than being indicative of their rarity.  You'll find plenty of loose figures at $18 price tags: with no buyers.  Left on his own, this is a $5 figure.  But, he's a lot harder to find on his these days.  Sadly, boxed Hiss III's have climbed in price.  So, it's not really feasible to buy up boxed items and open them to get cheap loose toys.  With patience, you can build a nice little army of Rip It figures.  But, there's no real reason to do so.  The figure lacks iconic colors, has flaws and sits in the shadow of the 1983 Hiss Driver.  But, it's at least an alternative paint job for a classic mold. 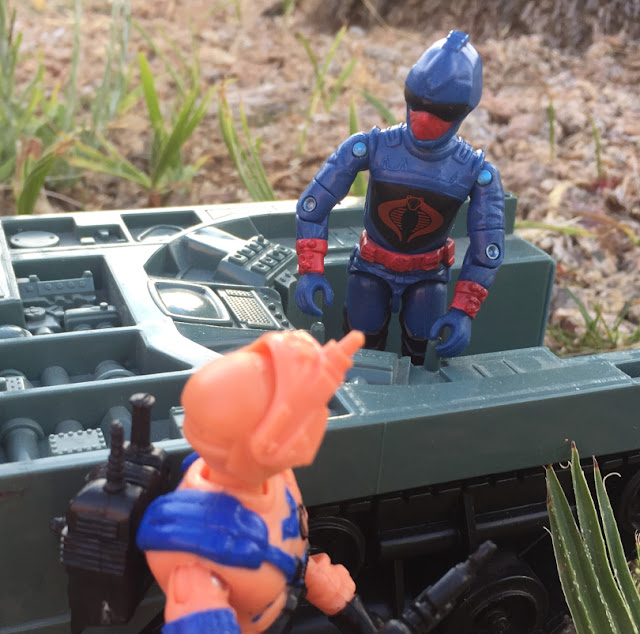 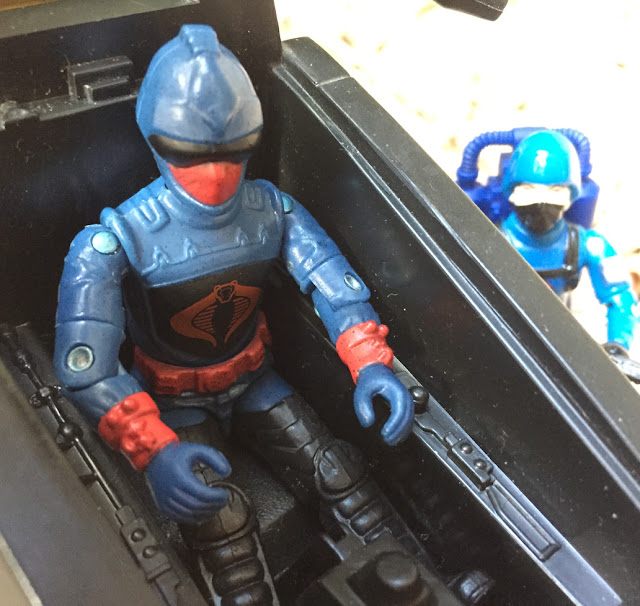 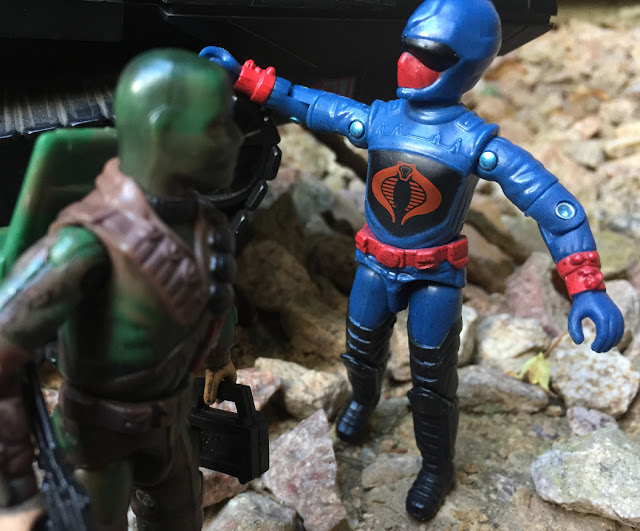 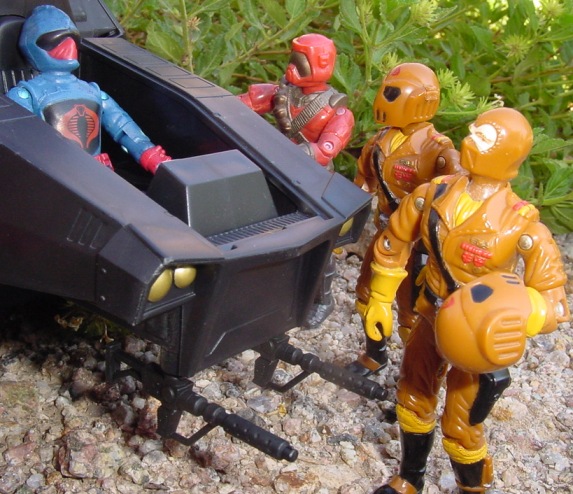 Posted by Robot_Sonic at 1:37 AM
Email ThisBlogThis!Share to TwitterShare to FacebookShare to Pinterest
Labels: 2001, Hiss Driver, Hiss Tank, Rip It, Vehicle Drivers