Prior to October of 1982, I was a Star Wars toy fan.  Pretty much the only toys that found any use in my house were Kenner Star Wars.  Kenner released a solid stream of new figures through the years and I would usually get vehicles for Christmas.  All of my play was centered around Star Wars and I rarely stepped out of that branded box.  But, in the fall of 1982, things began to change.  My younger brother received most of the 1982 Joe line as birthday presents that year.  In hand, I found the figures fascinating.  At first, the extra articulation as a bit off-putting.  But, the interchangeable accessories and more interactive vehicles soon won me over.  I spent most of October playing with my brother's spare figures.  I then received my own humble collection in December when Breaker, Snake Eyes, Hawk and Clutch formed a part of my Christmas and birthday present haul.  In the spring of 1983, though, the looming Return of the Jedi pulled my attention back to Star Wars.  I spent the sprint and early summer buying up all the ROTJ figures that were released.  In July of 1983, though, I discovered swivel arm battle grip had been added to Joes when an Airborne figure came my way.  I was then done with Star Wars and have been, primarily, a Joe collector ever since.

There is, though, an interesting period from January to around March of 1983.  During this time, my interest in Joe flagged a bit.  I was not aware of the existence of Cobra.  And, sans enemy, Joe got a bit boring.  As both my brothers and I had Snake Eyes figures, I used the three of them as an enemy force against the Joes.  But, that was short lived, too.  We had, though, received the mail in offer for a new figure named Cobra Commander.  As we had plenty of Flag Points left over from Christmas, we sent off for two figures.  In late January/early February, the Cobra Commander figures arrived.  They were straight arm versions, keeping them in line with the Joes we already had.  But, the new flashy colors, futuristic pistol, mysterious facemask and the back mounted weapon holder made Cobra Commander stand apart from any other figure we owned.  That day, I took most of my Joes up to my parents' bedroom and had them be captured by the two Cobra Commander figures.  The Joes were placed in a prison made by turning a laundry basket upside down.  The bars were "electrified" and only the protective suits of the Cobra Commander figure could prevent electrocution.  Of course, the Joes eventually escaped.  But, the memory of opening those two Cobra Commander figures and playing out the adventure on the deep purple carpet of my parents' room lingers with me more than 36 years after it happened.

After I turned to Joe full time in 1983, though, it was the swivel arm battle grip that drew me in.  As such, all of my old straight arm figures were simply obsolete.  Those two original Cobra Commanders were no exception.  They were dropped into a box with my unused Star Wars figures and forgotten about.  Destro and Major Bludd were all the villains I needed for a while.  Eventually, though, I had to get a new Cobra Commander.  I don't recall when it happened.  But, a swivel Cobra Commander eventually found his way into our childhood collection.  At this point, my only exposure to the Commander was through the cartoon mini-series that aired in the fall of 1983.  My figure was a combination of a leader, coward and incredible fighter.  In short, he could fill any need that the story required.  But, in 1984, the figure evolved again.

In 1984, I found the Joe comic.  I had seen a few issues that had been passed around the classroom in prior years.  But, in 1984, one kid in my class had a subscription to the comic and brought in all his issues.  I read them and was hooked.  I bought issue #27 at the local drug store and never looked back until the comic was cancelled.  (Save for one 6 month spell in late 1988/early 1989.)  The comic introduced me to the Cobra Commander who came to dominate my childhood.  The comic villain was much more ruthless and evil.  He was, especially in the first year of the comic, a villain much more true to his Nazi-inspired roots.  He murdered civilians, imprisoned his son, engendered loyalty to the death among his followers and was just generally cruel to those around him.  He was, in short, a classic villain of that era.

As more of Cobra Commander's origins came to light, the character softened a bit.  Some of this was surely due to kids buying up the comic in droves.  But, you sometimes have to sympathize with a villain, to a degree, to make them relate-able.  As we learned about Cobra Commander, though, his motivations and desires began to take shape.  At his core, Cobra Commander was the "little guy" who felt the world was against him.  He felt he should be able to pursue money by any means necessary.  Cobra started as a multi-level marketing company (we called them pyramid schemes back then, though) and the Commander was wary to avoid the U.S. government.  He culled his followers from the husks of old manufacturing and farming towns in the rust belt and midwest.  He promised them a better life in return for only undying loyalty.  At his core, the Commander was a radical Libertarian who wanted to be able to make money free from government oversight and then hoard military grade weapons as a means of protection against those who wanted to take his money away.  The Cobra army was also a way to have both financial and military power since politics were out of the question for a man who masked his identity.

Cobra Commander's mold got more use than pretty much any other figure in the vintage.  Yet, he was also criminally underused.  There are three variants of the light blue figure: the Mickey Mouse variant, the standard straight arm and this swivel arm figure.  The entire body was also used for the 1984 Hooded Cobra Commander who was available as a mail away through the line's retail cancellation in 1994.  In Europe, the Cobra Commander mold was used on the Red Laser figure from the Action Force line.  Around 1994, Hasbro released the helmeted Cobra Commander on a Chinese card.  Tons of these figures were sold by U.S. liquidators.  The figure has a different gun, but is materially the same as a vintage Cobra Commander.  To this day, you can buy a carded Chinese figure for less than a mint and complete with filecard Cobra Commander figure.  So, that remains an option.

Then, though, the figure disappeared.  In looking at the Chinese Joes that accompanied Cobra Commander's releaese, they have two general fates.  Many were resurrected in the late 1990's and early 2000's and used by Hasbro.  (Roadblock, Dusty, Lamprey, Dialtone, etc.)  Others found their way to Funskool.  (General Flagg, Lifeline, etc.)  But, there is no trace of Cobra Commander.  Hasbro planned a release of him in 1997.  This figure would have been dark blue with a golden face mask.  But, it never came to be.  Even as Hasbro remade seemingly useless figures in the 2000's, they never considered Cobra Commander.  The likely reason is that Hasbro had other, decent Cobra Commander molds to use and they felt it was easier to trot one of those out than to spend any money re-doing a figure collectors would have loved.  So, the Commander feels as if he were left behind and fans of this classic look have only the vintage figure to which to turn to find satisfaction.

The mold, though, remains ripe for repaint.  While I have suspicions as to why factory custom makers have been reluctant to embrace Cobra Commander, the simple fact is they have yet to adopt the character or mold.  This seems odd as there are many potential repaints that are possible.  Off the top of my head, the mold could be done with just the helmeted head in the following ways:

That doesn't include themed releases like a BAT themed Commander, a desert Commander, an Alley Viper Commander or even a Snow Serpent Commander.  And, if you have the hooded head, you nearly double that list.  Then, you can look at mimicking all the various anniversary era Cobra Commander repaints that Hasbro produced since 2007.  In short, the mold lends itself to a multitude of repaints and collectors would gobble them up.  Hopefully, it's just a matter of time until it happens.

This Cobra Commander has gotten expensive.  You see far too many nice versions sell between $75 and $100.  For a figure that was available for years during the line's height, that seems like overkill.  But, Cobra Commander has brittle thumbs, a brittle crotch, hands that are susceptible to paint wear and a silver face plate that will rub if you breathe on it too hard.  If that weren't enough, the light blue plastic used for the figure tends to discolor over time.  And, even samples stored in perfect conditions will discolor just due to the quality of the plastic.  (This is why you'll see a gem figure that has one badly discolored leg.  Or, the figure's back will yellow while the front remains pristine.)  So, the easily damaged figure goes for a premium.  You can still get high quality figures for around $50.  But, you have to be quick. 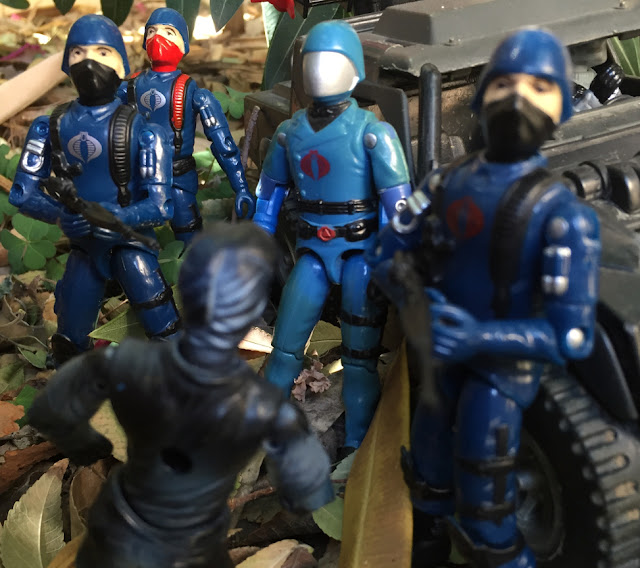 Posted by Robot_Sonic at 1:49 AM
Email ThisBlogThis!Share to TwitterShare to FacebookShare to Pinterest
Labels: 1983, Cobra Commander, Mail Away